It is usually green. It is almost always slimy. It is seldom attractive. It is universally cursed and derided by many Pond Keepers. It is, however, the most important grouping of organisms in any aquatic eco-system. It is generally called Periphyton. 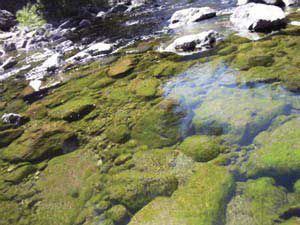 Although the dictionary defines Periphyton as “aquatic organisms, such as certain algae, that live attached to rocks or other surfaces.”, there are a bevy of terms that refer to the particulate organic matter (POM) attached to rocks and other submerged surfaces: “aufwuchs”, “biofilm”, “benthic algae”, the epi-s: (epilithon [rock], epipelon [mud], epissamon [sand], epixylon and epidendric [wood], epiphyton [plants] and epizoic [animals, such as snails and Caddis fly larvae] ) and, of course, “periphyton”.

Aufwuchs (pronounce: OWF-vooks, German, "growth upon") the fuzzy, sort of furry-looking, slimy green coating that attaches or clings to stems and leaves of rooted plants or other objects projecting above the bottom without penetrating the surface. Unlike Periphyton, it includes not only algae like Chlorophyta, but also diatoms, nematodes, protozoans, bacteria, fungi and myriad other tiny creatures such as Tardigrades.

Biofilm is the foundational structure of these combined communities and may vary in thickness from only a few micrometers to several hundred micrometers, from the thickness of a single cell to multiple layers and community groupings.

Biofilm- “A complex structure adhering to surfaces that are regularly in contact with water, consisting of colonies of bacteria and usually other microorganisms such as yeasts, fungi, and protozoa that secrete a mucilaginous protective coating in which they are encased. Biofilms can form on solid or liquid surfaces as well as on soft tissue in living organisms, and are typically resistant to conventional methods of disinfection. Dental plaque, the slimy coating that fouls pipes and tanks, and algal mats on bodies of water are examples of biofilms. While biofilms are generally pathogenic in the body, causing such diseases as cystic fibrosis and otitis media, they can be used beneficially in treating sewage, industrial waste, and contaminated soil.” (The American Heritage® Science Dictionary) 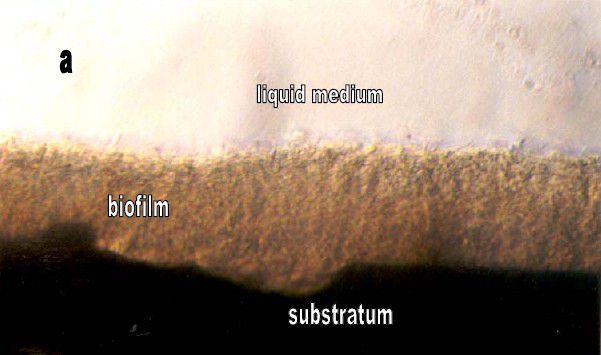 Biofilms are a crucial part of an aquatic eco-system. The microorganisms that make up biofilms form the basis for food webs that nourish larger organisms such as insect larvae, which are consumed by fish. Even plants benefit from naturally occurring biofilms.

The instant that the first water contacts any surface of your pond, whether it be liner, rock, filter media, plants etc., biofilm begins to form. Initially the first surface deposits are TEPs (transparent exopolymer particles) planktonic organic microgels that are ubiquitous in aqueous environments, which neutralize the electrical charge of the surface which would otherwise repel bacteria and other microorganisms. This initial layer of organics also serves as a nutrient source. Bacteria then begin to colonize the surface by secreting strands of sticky polymers (extracellular polymeric substances or EPS) which holds the biofilm together in a structural matrix and secures it to the surface. These polymers also serve to trap nutrients and act as very strong protective barrier against toxins.

As nutrients accumulate, the original bacteria multiply. These offspring bacteria produce their own sticky polymer. Soon a colony of bacteria is established.These “other

bacteria and fungi become associated with the surface following colonization by the pioneering species over a matter of days.”Borenstein (1994), (Whal, 1989) discussed the settling pattern of biofilm in four phases: (i) surface conditioning or adsorption of dissolved organic compounds where macromolecules attach to submerged surfaces following a spontaneous physical-chemical process; (ii) primary colonization or bacterial settling following surface conditioning and after their colonization, bacteria start to produce EPS, (iii) secondary colonization to bacterial layer and EPS pool by eukaryotic unicellular microorganisms, mainly protozoan, microalgae and cyanobacteria and (iv) settling of eukaryotic multicellular organisms as a function of nutrient sharing, grazing and predation. According to (Wetzel, 1983), associated organization from secondary colonization onwards can be designated as “periphyton‟. In that way, it could be defined as an advanced successional stage of biofilm. However, there could be a fifth (v) phase; the tertiary colonization where bacterioplankton colonized on the surfaces of unicellular and filamentous secondary colonizers (e.g. diatom, Oedogonium etc.). 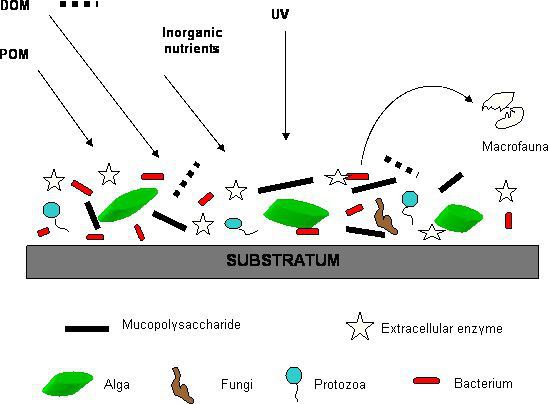 Once a certain bacterial population level is reached, a process called ‘quorum sensing’ occurs. Quorum sensing is a cell-to-cell communication through the use of chemical autoinducers that allows populations of bacteria to simultaneously regulate gene expression in response to changes in cell density.

Biofilm is made up of microorganisms and a polymeric web. Interestingly, in a well established biofilm, most of the volume is the sticky polymer matrix (75%-95%). This matrix holds quite a bit of water and makes the biofilm covered surface slippery. This is why, especially in bare liner ponds, it is difficult to maintain traction while you are wading in your pond.

A fully developed biofilm is a complex mutually beneficial community of various microorganisms living in a customized microniche.

“Different species live cheek-by-jowl in slime cities, helping each other
to exploit food supplies and to resist antibiotics through neighborly
interactions. Toxic waste produced by one species might be hungrily
devoured by its neighbor. And by pooling their biochemical resources
to build a communal slime city, several species of bacteria, each
armed with different enzymes, can break down food supplies that no
single species could digest alone. The biofilms are permeated at all
levels by a network of channels through which water, bacterial
garbage, nutrients, enzymes, metabolites and oxygen travel to and fro.
Gradients of chemicals and ions between microzones provide the
power to shunt the substances around the biofilm.” Slime City(Coghlan 1996)


A mature biofilm may take several hours to several weeks to develop. A fully developed biofilm is able to move water through the entire matrix, supplying nutrients and transporting wastes. Biofilms may be very thin to several inches thick. The biofilms that are usually encountered in an aquatic eco-system are measured in microinches. A microinch is equal to one-millionth of an inch. The congregation of multiple species into biofilm microcosms increases the range of organic and inorganic substances that can be biodegraded

Biofilm covers every submerged and constantly wet surface associated with a pond. It is on the rock, liner, plants, skimmer, biofilter and media, even inside of the pump and related piping. The biofilm in one location will be different in make up than that in another location. Factors such as light, water movement, temperature and availability of nutrients will determine the member microorganisms of each community. The very same parameters that we test for to ensure healthy fish also influence the membership of the biofilm community.

It is within this biofilm that nitrification and denitrification take place along with other chemical and organic conversion processes.

Biofilm is the primary source of production in an aquatic system. It is what sustains all higher levels of aquatic life.
Reactions: pastures, crsublette, Mmathis and 2 others