In the previous article, we discussed the formation processes and structure of biofilm in aquatic environments. We now turn to aufwuchs….its formation and composition, and the functions of the member flora and fauna.

As biofilm approaches its final stages of growth, which is determined by the availability of both organic and inorganic nutrients, algae begins to colonize the biofilm surface. Diatoms are usually first to colonize but are quickly followed by other sessile forms of algae including filamentous. The biofilm and algae form a mutually beneficial partnership. The biofilm supplies nutrients to the algae and the algae in turn supplies much needed Oxygen to the biofilm bacteria.

Earliest algal colonization cells excrete mucilage then organized into pads, stalks with contribution of other organisms (Goldsborough, 2005). There are different adaptations changing with different taxonomic composition such as stalks with sticky ends, sticky capsules, muscular suction pads, glue or simply clinging to the substrate (Reid and Wood, 1976) later, chemical and physical factors develop the assemblage and make it denser.

Two of the factors that influence the algae growth and colony population are light and temperature.

Light had no important effect on abundance of algae, different light intensities form different algae taxa in aufwuchs structure (Vermaat J. E., 1995). For example if sufficient light is available, the community will be microalgae dominated. If there is light penetration, the aufwuchs community will be heterotroph dominated (Goldsborough, 1993). Although in very low light regimes (12 μmol) algae growth is minimal (Hill and Fanta, 2008), aufwuchs structure can support high irradiance (800 μmol) exposure

(Nofdianto, 2010). Photosynthesis occurs at levels far below maximum daily irradiance and photoinhibition is typically rare (Goldsborough et al., 2005). Temperature has effects on aufwuchs taxonomic structure like light regime (Vermaat J. E., 2005). For example, while high temperatures make the algae Scenedesmus dominate, low temperatures favored the algae Navicula in Vermmat and Hootsmans (1994)’ and Bothwell’s (1988) study. Besides it is same for season differences that diatoms are dominant in spring and green algae or cyanobacteria are dominant in summer (Meulemans and Roos, 1985).

Substrates greatly influence aufwuchs population diversity and richness. Sand and silt provide the poorest habitat, because of few attachment sites for algae and consumers. Boulders, rocks and gravel are better because of larger surface area, more attachment sites, providing cover and refuge, and divert the force of moving water. Organic substrates such as logs, stumps, and tree branches are known to provide the best substrate for supporting taxa richness because of the immediate availability of carbon and other organic compounds. Twigs and leaf litter also support an abundant community but are not long-lived in the aquatic environment thus providing only temporary benefit. Aufwuchs are classified by substrate (all of the epi’s mentioned in Part 1 of this article) and by certain water quality parameters (pH range, nutrient levels of N and P, the Halobian spectrum - chloride concentrations or conductivity, and the Saprobien system - based on organic pollution). 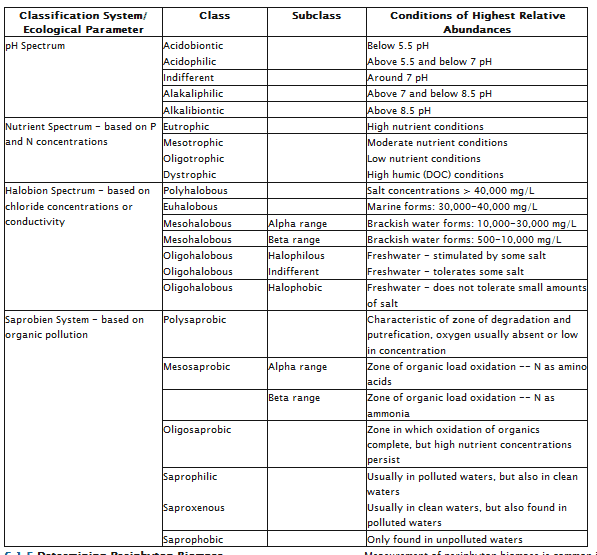 It is a well known fact that diversity in any ecosystem is the ultimate key to the stability of that ecosystem. This especially holds true within aquatic ecosystems. Mixed populations have the advantage of being able to perform more complex transformations (for example, those requiring multiple steps), and they are more resistant to environmental stress. (Brenner, K., You, L. & Arnold, F. H.) The more diversity and abundance an aufwuchs algae population can sustain the more diverse and abundant will be the population of the various micro-, meio-, and macro-organisms within the aufwuchs. In addition, the potential for diversity also increases the community’s ability in remediating pollution, organic and inorganic. The types of algae within an aufwuchs community are also indicators of, not only form but also, level of pollution. In a typical garden pond N and P are usually the two pollutants of concern; however other pollutants may be encountered, such as heavy metals, herbicides and pesticides.

Living upon, and within, the diverse aufwuchs algae colony is a variety of animal life ranging in size from the micro- (amoeba, protists, ciliates, flagellates etc.) through the meio- (nematodes, rotifers, harpacticoid, cyclopoid and calanoid copepods, ostracods, oligochaetes, tardigrades and gastrotrichs. Nemotodes being most populous). Meiofaunal organisms play an important role in the aquatic food web complex since they consume bacteria, other microfauna and flora, and detritus, and they are, in turn, consumed by many larger macrofaunal invertebrates and juvenile finfish (Stickney et al. 1975, Bell and Coull 1978, Alheit and Scheibel 1982, Kennish 1986, Smith and Coull 1987, Coull 1990), and macro-organisms (Insect larvae, nymphs, and adults; snails, crustacean, amphibian larvae and fish larvae). Each, to some degree, relies on the aufwuchs as a source of food. These organisms are classified by method of feeding: raspers, grazers, scrapers, piercers and gatherers. Larger organisms such as herbivore and omnivore fish also look to aufwuchs as a source for food. Nemotodes, copepods and turbellarians comprise more than 95% of the meiofauna in most aufwuchs. 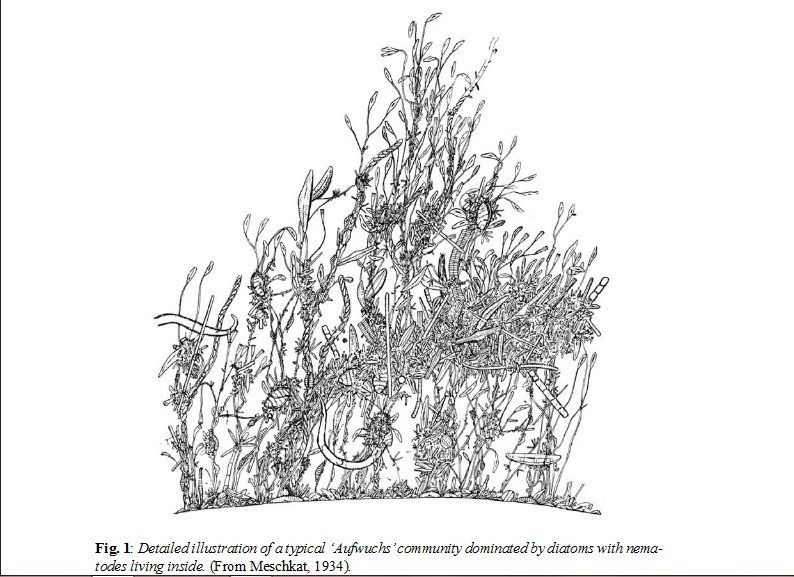 Since aufwuchs is sedentary, it is sensitive to changes in water quality. A diverse community can be found in healthy streams and ponds. Nuisance blooms are usually symptoms of a system stressed by factors such as elevated nutrients and high temperatures.

It is usually green. It is almost always slimy. It is seldom attractive. It is universally cursed and derided by many Pond Keepers. It is, however, the most important grouping of organisms in any aquatic eco-system. It is generally called Periphyton.
Reactions: GBBUDD and Dave 54