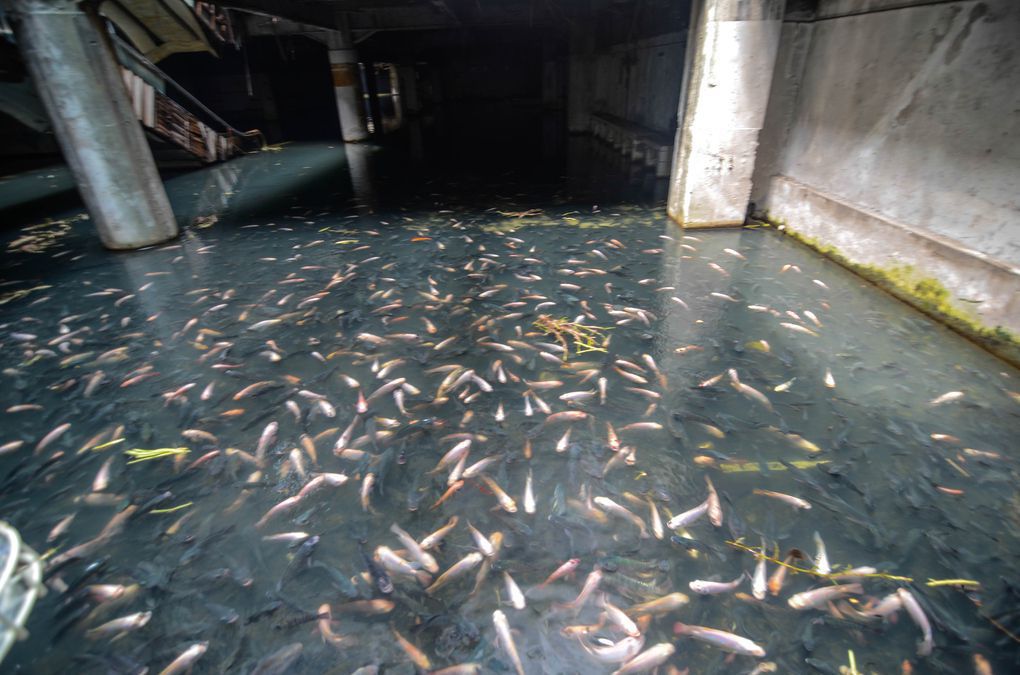 There's something particularly eerie about an abandoned shopping mall. Perhaps it's the stark contrast from its intended purpose: to see such a sterile place once designed to entice throngs of shoppers into its doors, now so completely devoid of any human life, dilapidated and darkened with time. It's basically the very definition of post-apocalyptic. But in the case of the (now ironically named) New World shopping mall in Bangkok, Thailand, abandonment by humans doesn't equate with lifelessness. The mall, which reportedly caught fire in 1999 (rumored to be arson by a competitor), has since flooded with several feet of water and become a paradise for koi and catfish.


As seen in these photos from chef / travel writer Jesse Rockwell, the resulting "urban aquarium" is at once delightful and surreal. Rockwell writes on his travel, photography, and food blog A Taste of The Road that someone deliberately introduced the fish into the vacant mall, but that locals in Bangkok's old town "discourage people from visiting it." He says he had to wait for a policeman to leave before entering, which makes his resulting images all the more breathtaking.

wow, wondering which mall it is (the name doesn't ring the bell) I'll have to tell my friends about it.

Hmmmm, wonder what kind of health those fish are in. There's no telling WHAT is in that environment!

Mmathis said:
Hmmmm, wonder what kind of health those fish are in. There's no telling WHAT is in that environment!
Click to expand...

That was my first thought also!

I have reached pond nirvana

Location
At my computer

What are all these things eating? They are thriving somehow.

I saw this on Facebook and someone said the locals introduced the fish to eat the mosquitos and that they feed them.
Ad

JohnHuff said:
What are all these things eating? They are thriving somehow.
Click to expand...

Leftover Chik-fil-a and Sbarro from the food court!

This is amazing! I wanna go! Looks really eerie with all those white fish. Ghost fish!

I manage an abandoned hotel with an outdoor swimming pool and have alway been tempted to throw some fish in it. So far I have been good but I think it would be fun to see the results. There is a ton of algae for them to live on but I'm not sure if someone ever buys it they would appreciate all the fish in the pool!

I may be mistaken, but those do not look like koi to me.

MitchM said:
I may be mistaken, but those do not look like koi to me.
Click to expand...

That was my first thought too! My guess would be tilapia.
John
Ad

WOW How strange, must be lots of bugs for them to eat! They look like they are all doing well to!
Ad

Amazing I'm supprise that PFK hasnt reported on this yet they go for wierd and wonderful story's like this , looking at them they all seem to be hail and hearty , they have to have bred there to fill the place like that , I'll bet those catfish are big
I dont think they are koi though most probably tilapia's, however I didnt think they had that many colours as a species ?