About to attempt to rebuild our deck pond myself, with helpers. Intimidated!

About 15 years ago my wife and I attended a local home show in Dayton, Ohio area, and saw a garden pond which had been set up there for all to see. I had always dreamed of such a pond, but the idea that a pond could be built and populated with fish quickly enough to be ready for a home show blew my mind. A few months later a young man came out to our home, and installed a pond under our bow window, which faces the shore of the lake where we live. It was done in a single day (if I recall correctly), and we loved it.

But now, many years later, the plants have overtaken it, the bottom has filled with years of muck, and the contractor who built it is gone. My wife and I want to make it a little bigger, and then add a separate "meandering stream" to it later. I've hired a couple workers whom I use for other landscaping work, to do the heavy stuff for me.

Attached are a few photos of when it was only a few years old. I THINK I took photos to help me seek advice on string algae, or etc.

Today, the pond is totally over grown with iris's, second-rate lillies, and other aquatic plants. Plus, it hasn't been cleaned out in years, so the bottom is filled with muck (that's what the plants take root in for expansion). The plus side of having too many plants is that we no longer have much trouble with string algae. We ASSUME that the large number of plants are using up the nitrogen in the water.

We are also having to add water to the pond at least once, and often twice per week. So we suspect a leak in the liner.

Attached here are some photos of my wife and my oldest grandson, cleaning the pond. He is 10 years old now, so the photos are about 9 years old, which gives you an idea of the age of the pond.

Here are some photos taken yesterday and today, showing the overgrown plants, and the neglected, ugly areas:

We want to make the pond bigger, to use up more wasted space and make more room for fish. Plus, we want to make it deeper, to give fish a way to hide from predators and to give them more room during the annual total freeze-overs, which can last for weeks (the fish seem unbothered by these deep freezes, and emerge in good shape every time the pond thaws).

Plus there are several other problems we hope to address. First, I want to bury the plumbing more deeply, as it gets cold here in Ohio, and sometimes the systems has seemed to freeze solid. See photo:

I confess that I've gotten a bit carried away lately, after watching the TV series: INSANE POOLS, OFF THE DEEP END, and so now I would like to first expand our little pond, and then next year build a series of waterfalls and stream down our backyard hillside towards our "larger pond." LOL. See photos:

With respect to my point of, "getting carried away," I have dreams of making my pond appear to flow out underneath my deck, and then to flow down our sloping back yard towards the lake. But, taking inspiration from one project on that TV series, I hope to actually put my skimmer just under the deck (utilizing a trap door to walk on, and to cover the skimmer/pump housing). Then, I would like to make another trap door, and under that launch the other, isolated water, which would then meander down a series of pools and waterfalls to a small pool at the bottom. I know it's dreaming big (maybe too big?) But I'm hoping to be able to just rebuild the existing pond this year, placing the skimmer under the edge of the deck, and then build the other section next year. Attached are photos of the section of deck I would plan to replace with matching trap doors, concealing my pond equipment while also permitting unhindered use of the deck.

I figured my existing pond must be about 1,000 gallons. I normally keep 6 or 7 goldfish in it, along with a very small bluegill or two to keep out mosquito larvae. I hope to increase it to about 2,500 gallons. I am hopeful that the existing plumbing, skimmer, and waterfall will be adequate. There is no "filter" in my system, except the skimmer. Can someone please recommend to me whether or not I should add one now, and if so, what type? I really need advice.

I ;like iris for cleaning the water but they just grow to fast .I took out an abandoned pond with an iris in it and had to use my truck and pulled the whole liner out with the iris .Muck in the bottom of the pond can be cleaned out with a pool net .

This is indeed an ambitious project! Let's start with step one - are you settled on sticking to the confines of the deck for this pond? What if you abandoned the deck pond and built a beautiful in ground pond - you certainly have the space and beautiful setting for it! Just thinking outside the box...errr deck here!

Outside of the "deck." I LIKE it! Well said.

Our challenge is that we have that 250 acre lake just below the hillside of our property, which floods 2 or 3 times per year, coming up to about where that maple tree is in the attached photo. There isn't much room realistically for a pond there, without MAJOR excavation.
Ad

Yes, we plan to keep THIS pond inside the deck opening which was created for it about 20 years ago. It's directly below our bow window, and my wife and grandkids love to look out at it, day and night. It's terrific for looking at shy creatures who come to the pond.

One challenge that we have is that our yard drops off pretty quickly towards the lake shore, and then when it levels out, the lake floods up into that area 2 or 3 times per year...sometimes almost reaching that maple tree in the attached

My wild dream is to make another water feature next year, which would be a series of little waterfalls running out from under the deck, and meandering down to a small pool near that maple tree in the attached photo. I plan to put a new skimmer and pump under my current deck, by cutting away some of the existing boards, digging a deep hole, and then covering the skimmer back up with a trap door made out of the same decking boards.

I'm hoping to make the appearance that my pond water runs under the deck on one side, and then tumbles down the yard in a series of waterfalls. In actuality, it would be two separate water features. Thus, I need to keep this first little pond inside the confines of our deck.

At least, that is my plan right now! LOL

Gotcha! Your scenery - gorgeous! What a view!

Thank you. We love the views seen here at the lake, in southern Ohio. I've included a shot I took of an evening sunset, looking to the left of the view I posted above:

And lately we've had a bald eagle stopping over for a lunch of fresh fish, perching in a tree at the corner of our backyard. Love it here...just need to get our water feature back under control!

Here is a photo of the section of deck that I plan to cut away, for placing the skimmer/pump housing. Directly under the spot where my little grandson was sitting. Then I'll make a trap door to cover it. 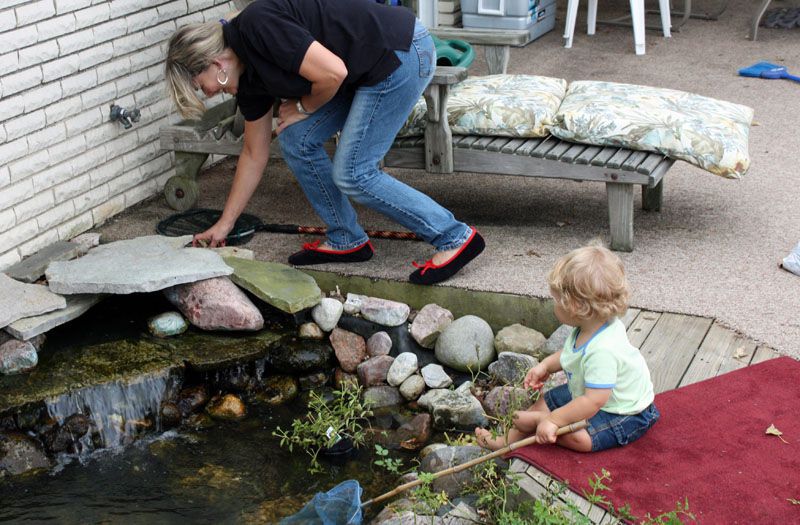 Here is another photo, which might help me explain where I plan to put my skimmer this time, and where the outlet and/or waterfall will be (hopefully!) next year. The red circle is where I want to put the skimmer today or tomorrow, as work progresses. The blue rectangle is next year's planned location for the beginning of a meandering set of waterfalls. Keep your fingers crossed for me, please! 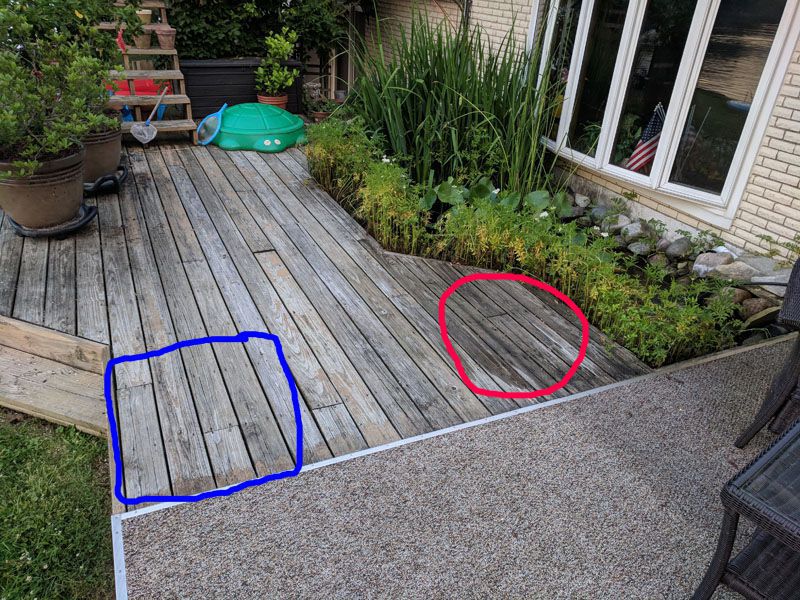 @addy has a deck pond that waterfalls down her hill - bigger hill, same concept. Check out her build showcase!
Ad

do you get lots of stuff blowing into the pond .I just know UI have no skimmer because nothing really blows in and what does blow in a pool net gets it out
You must log in or register to reply here.