So I finally got my female bettas. It’s a 30 gallon tank, ( not full right now) with 5 female bettas, 9 guppies, and currently 3 tetras. The tetras will go to a friend once she gets moved and sets up her tank. Currently it has 7 potted lillies in it I’m growing to a bigger size, but I’m thinking I’ll eventually turn it into a planted tank, and I’d like to copy Jacks b nimbles riser of plants behind it if I can devise a good way of doing so. A power head with a tube on the outlet will push the water to the top where it’ll be filtered and feed the plants before falling back in. I’ll be breeding the bettas once the girls are bigger, and see if I can raise the fry. The male is in a vase of water for now, he’s a pretty veil tale that’s turquoise and blue. They’ll be bred in my 10 gallon, no worries there. The bettas will keep the guppy population from a massive explosion I’m sure, in fact I’ll be getting more females from my sister. I’m enjoying watching them swim around eating daphnia, starting their posturing, establishing who’s boss. With summer here, I’ve got till August maybe September to keep them fed with daphnia, mosquitoe larva, good foods. Great to raise the babies on. 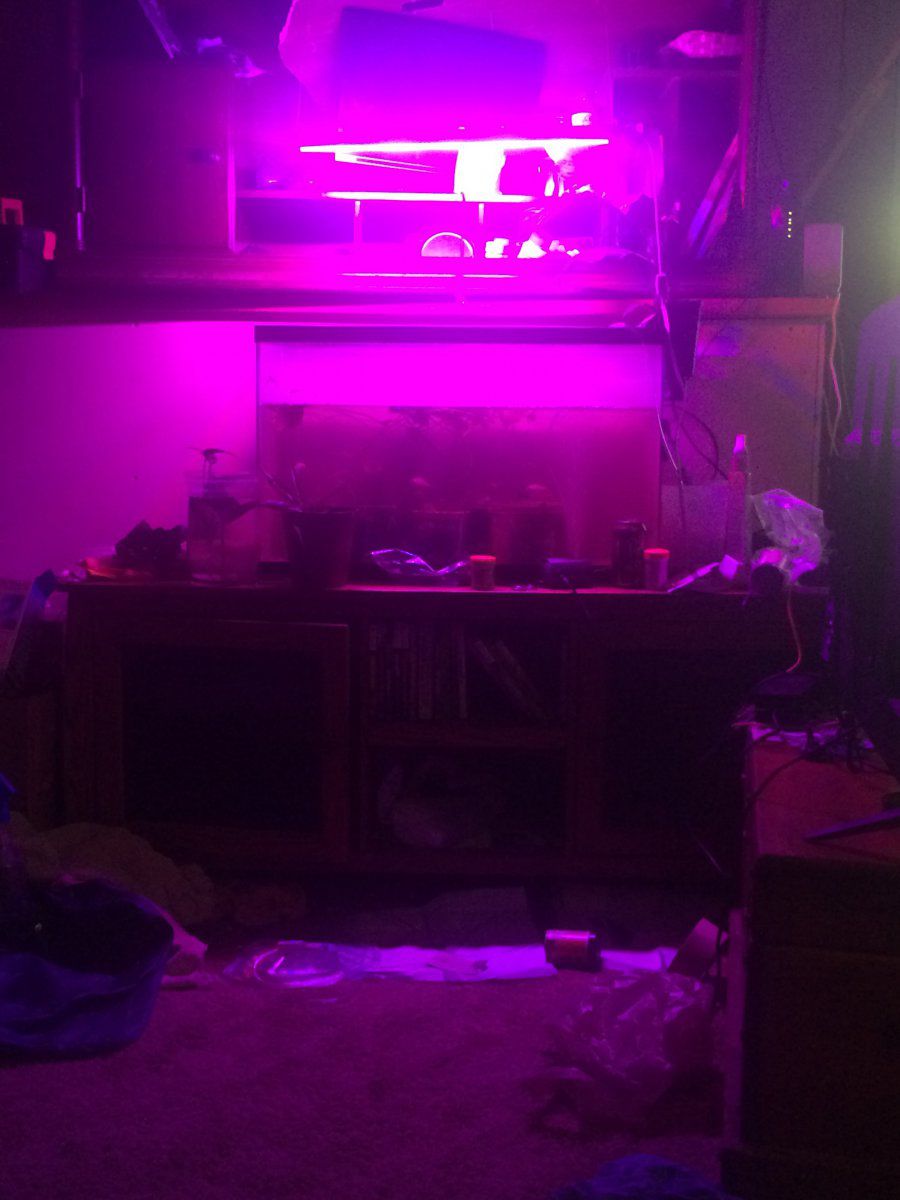 Ignore the clutter around, I’ve got cleaning to do!
Ad

Sounds like a fun project! You probably already know this but here is a link to an organization that really helped me (and my kids) many years ago:https://www.ibcbettas.org/

Stephen Noble said:
Sounds like a fun project! You probably already know this but here is a link to an organization that really helped me (and my kids) many years ago:https://www.ibcbettas.org/
Click to expand...

Thank you, I didn’t know about them.

I shined a white light in to try and get natural color pictures. Turns out my guppies like betta pellets just fine, and the betta nibbled the guppies flake food. They all like the daphnia. I’ve got names for the bettas, white crown tail with red fins is Yelena, dark body crown tail is meridith, prettiest crown tail is Mercy, ( my favorite pick to be bred to my male, as he’s turquoise blue, her body is showing same color but with red fins) then I’ve two blue veil tails, Cobalt and Dusky. I’m working on training them to associate me with good things, and it’s already working. My male is a pretty turquoise veil tail, but his tail has a twist at the end, my husband picked him out!

And the pleco tank now has 3 tadpoles, and as far as I can tell, 5 fry that hitched a ride with the tadpoles and duckweed. Really small fry, I barely saw them!

The males is twice the size of all but Yelena. She’s bigger than the rest, almost of size to breed. But I don’t know if I want to breed her. She’s shy, starting to interact with the others, I’m going to wait and see how her colors develop. So he’s a picture with her in it, she’s the white one, and a picture of the male. Hubby hasn’t decided a name for him yet.

Today I removed a dragonfly nymph from the pleco tank. And caught 7 or so baby fish. It’s my intent to raise guppy fry and such in there once they start breeding, so I have to get the predators out. I’ll probably put the minnow fry back, but only till I’ve got breeding guppies. Once I have a big enough population of guppies, I’ll leave them in with the bettas to survive or not on their own, unless I’m looking to sell some or give some away. These fry are of unknown species, so could end up being predators themselves once grown!

I pulled a stupid. I got the female guppies from my sister, , didn’t quarantine them, now I’ve got ich in the tank. I’d already separated the betta girls so they could recover from the fighting, I left the big white one in the tank, just found her and one of my orange guppies not doing well, closer look shows ich. The guppies have it worst, so separated the betta and am treating them all with salt in the tank, I’ll be doing daily 25% water changes, raising tank temp, and watching close till I can get to a store for proper ich treatment. Grrrr. I was just thinking I might breed her too. I doubt the orange guppy will make it, but the betta stands a chance.

Bummer hope you can make her better.

I thought I lost a betta, her cup was minus a fish. Looked in the tank, didn’t see her. Went to bed wondering if a cat got her, or if she jumped out and dried up. So I got up and checked the tank this morning, there she is. I’ll be making a post on illness to learn more about ich.
Ad

Glad you found her

I looked and looked yesterday, in the tank, on the shelf, couldn’t look behind it due to weight, but I was convinced she was gone. One of my solid blue girls. I’ll try reintroducing them once I’ve got ick cleared, and am sure it’s gone. Then I think surviving guppies and the tetras will join the others in the pleco tank, and I’ll try providing more space for them to hide and set up their own territory. I suspected the big white one of beating up the others, so I’ll add her in after I’ve tried the other four together about a week, if she pulls through.

It is so amazing. Female Betta's can find a tiny opening in the lid and slip out. It is hard to believe. I also found this with mudskippers. Thankfully, I was around when both decided to 'exit stage left.' Many of us have been through the, "Oh, these fish look great" only to find them to be distressed and diseased. You are doing the best anyone can do. I wish you well.

With the flooding we’ve been having, I’m stressed financially, and haven’t made it to get ick cure. I’m hoping today I can do that if the local Walmart has it. Then I’ll shift fish to smaller tank, drain old tank, let it sit dry, then scrub it with vinegar and salt before I refill with other tanks water and pond water, let it cycle, then add fish back.

Local store doesn’t have the treatment. I’ll go to the big store next town over and see what they’ve got, as well as hit tractor supply, Atwood’s, etc to find what I may need.

Got treatment, now working on rearranging who’s in what tank for treatment. White betta is in hospital tank with the weakest guppy, I’ll add the other fancy’s once they adjust to temps, they were in a cooler temp tank. Plain guppies are all going to be in one tank, and the tetras go back to the pleco tank for half dose treatment. Using Kordon rapid attack for the hospital tank, and I filled all the betta cups from that before adding the fish. Then the plain guppies will get jungle ich Guard, regular strength, and the pleco tank will get that half dose. I’m waiting on fish to adjust to temps, then I’ll add them, give them an hour, and medicate.

Due to natural predators, and an overly armorus male, I’m down to one female betta! But the guppies population exploded! I just found new fry, still clear! Between the orange female and two blue males, I’m getting some pretty combinations, a few with almost purple colors!
Ad

So update. I’d already posted it in main chat, but just in case others decide to try this too.
I have betta babies, apparently at least 3 were spawned over the summer, though I never saw bubble nest. They all kinda look like their mom, some more red, two are more more drab, but still smaller than she was when I got her, so time to grow and fill out.
As for guppies, I’ve now set up a second tank, with a substrate of kitty litter, and a few water lillies. That one has just the guppies I want to breed, I’ll net the fry once they are bigger, and put them in the other tank, until I achieve the look I like. I’m trying to breed more color into them, with the spots on the tail. I have two males that match the look I want except for the spots, so one is in with the females with the spited tails. The other tank had the drab ones, excess males, tetras, pleco, and betta young. The betta young will continue to help cull the guppies population.