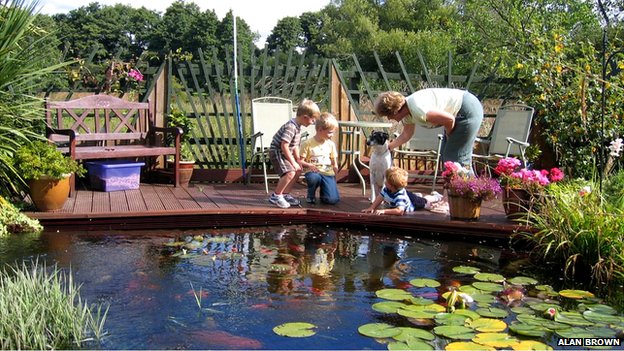 A couple are blaming an otter for eating its way through £10,000-worth of fish from their pond.
Alan and Linda Brown, 60, returned to their Norfolk home in mid-January after a holiday to find 200 of their 250 koi carp and goldfish had been killed.
The pair said their neighbour contacted them while they were away to say some fish were dead, but was too upset to tell them the full extent of the loss.
The Wildlife Trusts said it was likely an otter or a mink was responsible.
Mr Brown said: "I couldn't believe an otter could do so much damage.
"We are both dismayed. We had hundreds of fish in the pond - we had ghost koi, mirror carp, golden orfe and lots of goldfish."
Mr Brown, who lives with his wife in Thetford, said his neighbour contacted them to say some carcasses had been left on their garden pond's decking with their heads and tails intact, believing an otter had attacked them.
'Expanding territory'
But he said he did not tell the pair - whose garden backs on to the Little Ouse - the extent of the problem because he "didn't want to ruin our holiday", and cleared away the remains. 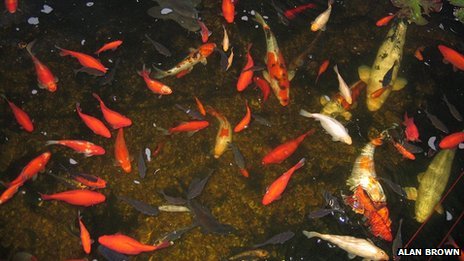 Alan and Linda said some of the fish were 25 years old
Mr Brown said the remaining fish had now been removed from the pond and it was going to be filled in.
"We saw an otter about six months ago near the river and our friend had warned about them being in the area, but we'd never had a problem until now," he said.
"For the first six to seven years of being here we never even had a net. It's just life I suppose, but more should be done to make people aware of the problems otters cause.
"We used to have four foot grass snakes, adders, lizards, newts, kingfishers, ducks and loads of wildlife come to the pond, but now we'll never see those again."
Darren Tansley, from The Wildlife Trusts, said: "With all the flooding we've had recently we are finding a lot of otters are coming further off the rivers and expanding their territory."
Otter numbers dramatically declined in England and Wales between the 1950s and the 1970s.
But numbers grew in recent years following a reduction in pesticide use and improvements in water quality and fish stocks.
Ad

Wow! Now we got to be worried about otters too! I will keep my eye out for them for sure!

That's horrible! Sad they had to get rid of the pond tho. No otters around here as we aren't close to any rivers unless 5 or 6 miles is considered close? If so we are in trouble if they find our place too!

I'm glad my pond is enclosed behind walls.
Ad

Wow... that is really sad... I knew we had otters here, but never hear much about them, so did a websearch, and according to multi articles, we literally had none ten years ago, but nearly every water way has them now... considering we are a sand bar with nearly as much area in ponds, marshes and rivers as dry land, otters could be a concern for pond owners here... I dont think there is a home here further than a half a mile from some type of water (ocean, pond, marsh or river) ... something to think on...
You must log in or register to reply here.