Bought a new toy! A Flir

Bought a flir = infrared camera that attaches to my cell phone. Amazon ordered late last night arrived at 7am,

We always struggle trying to figure out if the bees are still alive this time of year. Too cold to open and inspect, some do fly out during cold days, they have to use the potty, some fly out a lot less. So you can not watch the hive and decide.

Our hives are alive, this one is cranking ie huge, it will need to be split come spring. The bees still in the upper part of the bottom box and the mid box. 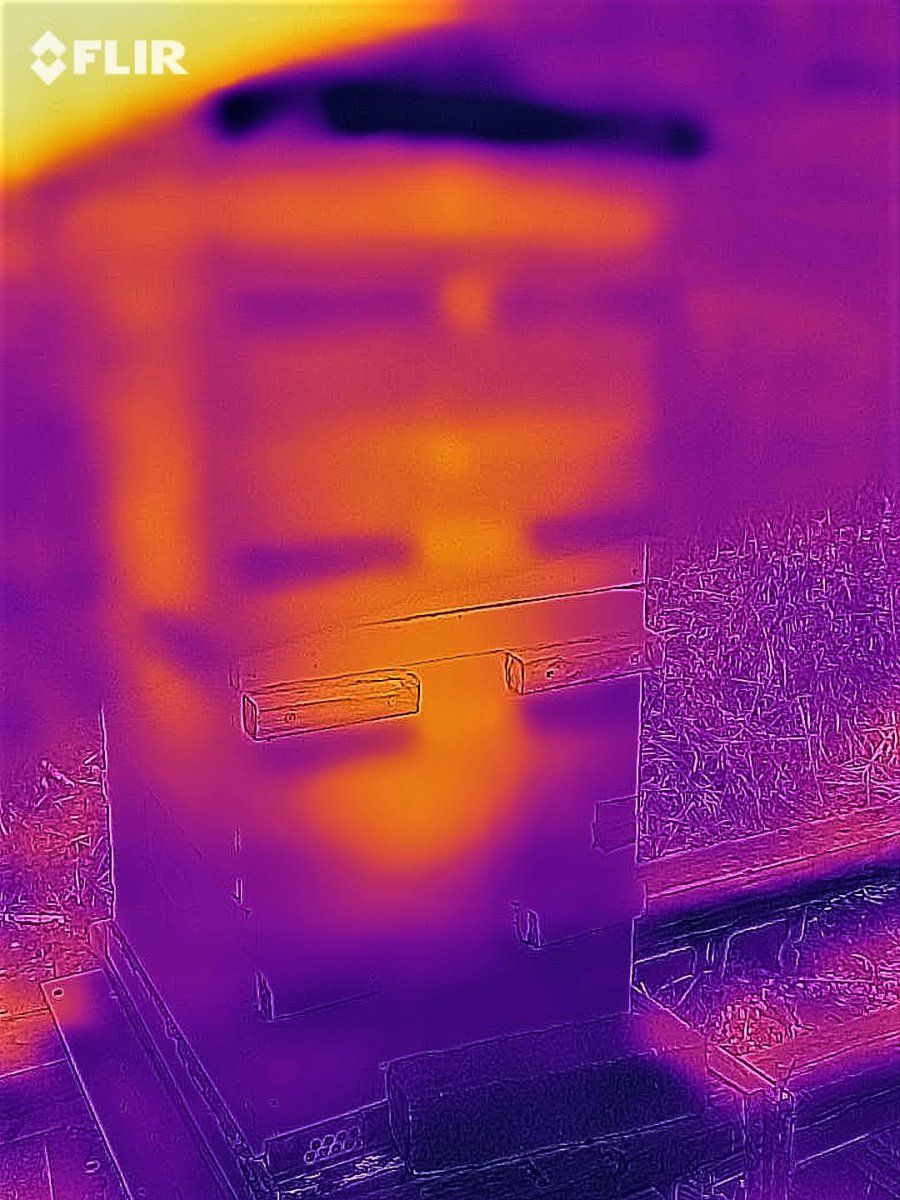 one is struggling, smaller cluster, but still alive! Red equals heat. The cluster is still in the second box but totally against the left side of the hive. 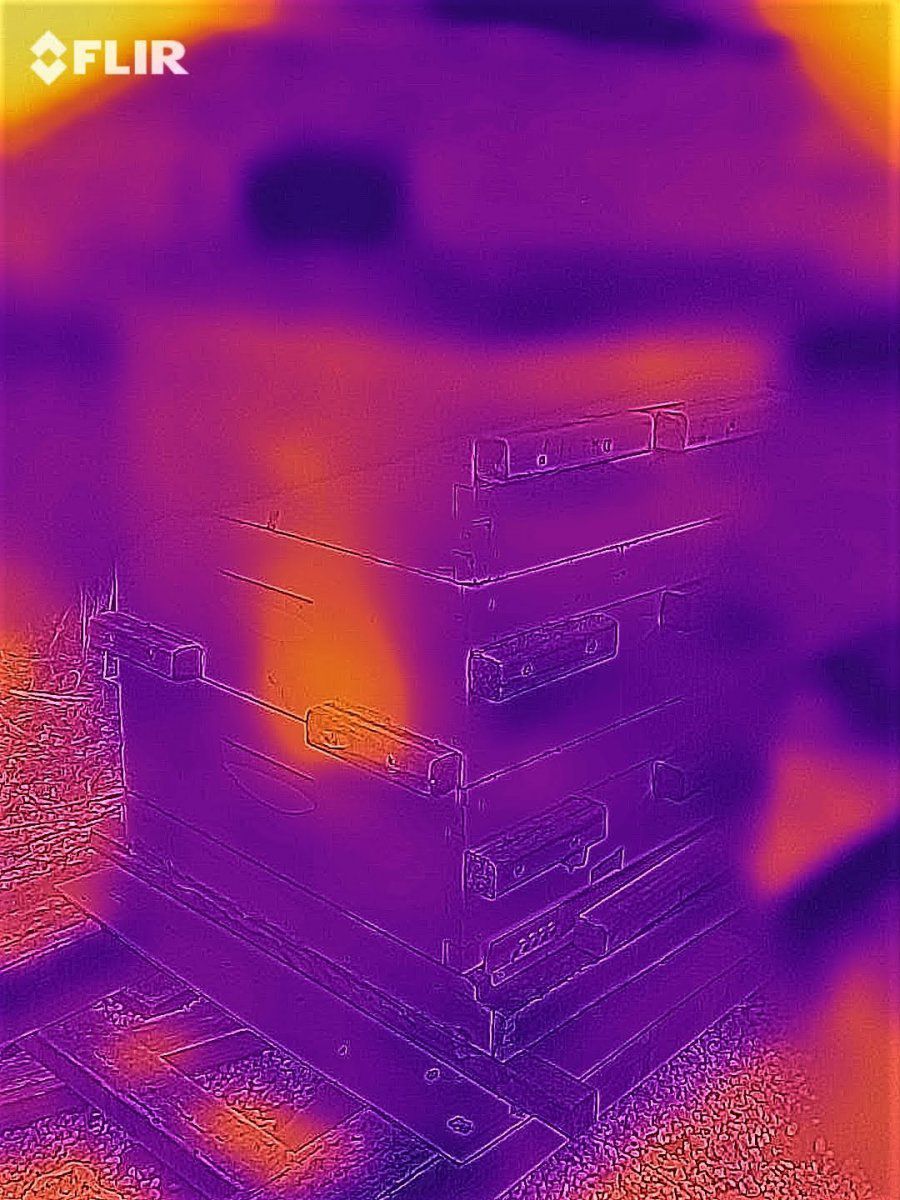 This hive, the bees are at the top of the hive, which means they have eaten all of their food we need to monitor and feed sugar blocks as needed until around the first of April
. 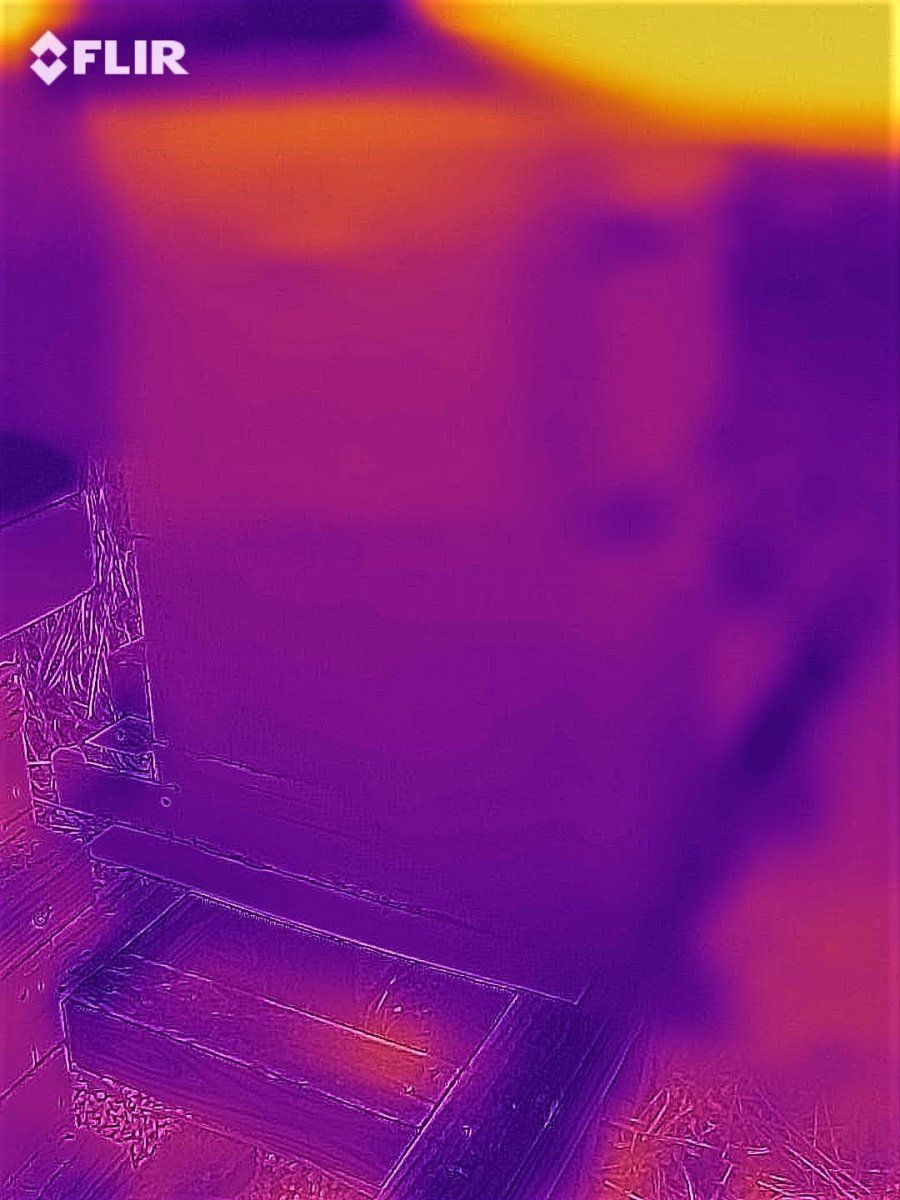 This is a nasty hive very aggressive. They will be requeened come spring. I went out at 25 degrees, you need to be aware that your body heat can be reflected from the hives, so I watch for the heat signature at the handles. This hive is still in the second box/ top box, a large amount of bees creating heat. 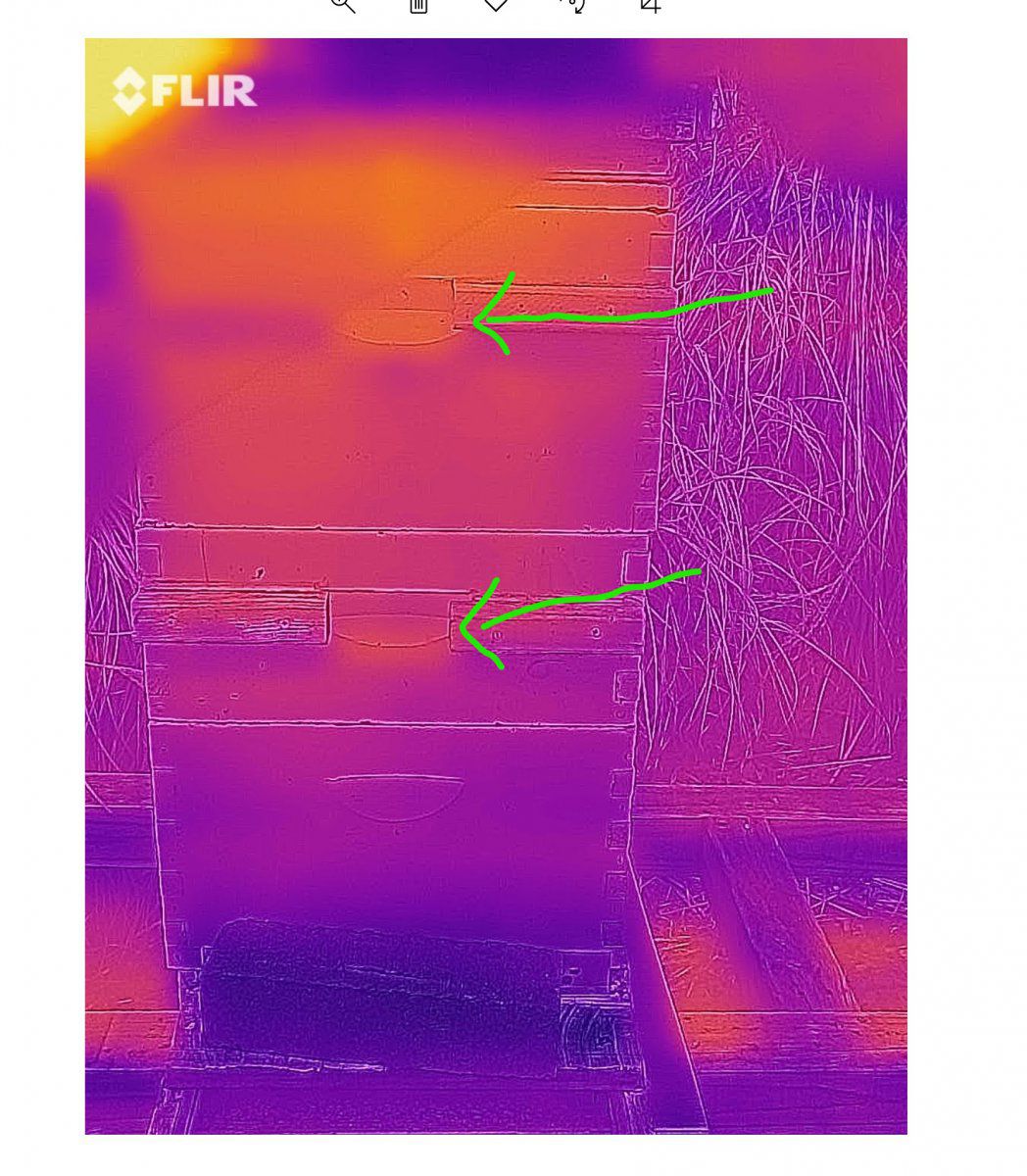 I saw you posted this on your Facebook page - very cool!

What a great invention for you!
Ad

That's great! A non-invasive way of monitoring the hives!

Very cool !! How will you handle the aggressive hive and requeening in the Spring?

Tula said:
Very cool !! How will you handle the aggressive hive and requeening in the Spring?
Click to expand...

I was wondering the same thing. @addy1 has really enlightened us to the intricacies of this hobby — it is fascinating!

Honey gone hi tech , and to think i thought it was the simplest of all sweets. Looks very similar to a corona cam and they are not cheap at all. you would have to sell a boat load of honey to pay for it.

I bet this makes your job a lot easier...
Ad

How interesting. Thanks for taking the time to explain each hive. Interesting about the 'nasty hive'. Nice that you can change that just by changing out the queen.

Tula said:
Very cool !! How will you handle the aggressive hive and requeening in the Spring?
Click to expand...

We suit up, smoke the heck out of them and then search and search for the queen. Find her, pinch her, replace her. She is real hard to find in all of those bees. She runs fast, the nurse bees hide her.

The queen runs the temperature of the hive, a hot hive remove the queen and they usually calm down.
Or we can also split the hive, take a box of brood and nurse bees from the hive (the brood box with the frames) set up a new hive. Leave the queen with the bees that are left. Sometimes that helps, but this hive did requeen themselves last year and they are still nasty.
Either buy a queen or let them make a new one. But need to wait for the drones to be flying for that.

They attack us anytime we open them, the other hives mostly ignore us. Last time I went to feed them I had around 25 stinging my gloves.


GBBUDD said:
Looks very similar to a corona cam and they are not cheap at all. you would have to sell a boat load of honey to pay for it.
Click to expand...

The Flir was not real expensive, Amazon 177 well worth the expense. It uses your phone rather than buying a dedicated camera with infrared. Losing a hive to starvation is equal to losing around 600-800 bucks. They have around 30k bees during the winter, right now brooding up for spring, they will have around 80k bees during the summer. A package of bees now costs around 150 that is 10k bees and 1 queen. Then it takes all summer for them to get to the size to make honey.

I did just buy a new piece of equipment to do Oxalic Acid Vaporization to the hives, will not mention what that cost. We treat with the OVA to kill off the mites that carry virus that kill the bees. But the cost of it will be covered by saving one or two hives from dying off due to the mites.

You can see the queen in this picture. The nurse bees surrounding her to feed her and guide her to where she should lay eggs. 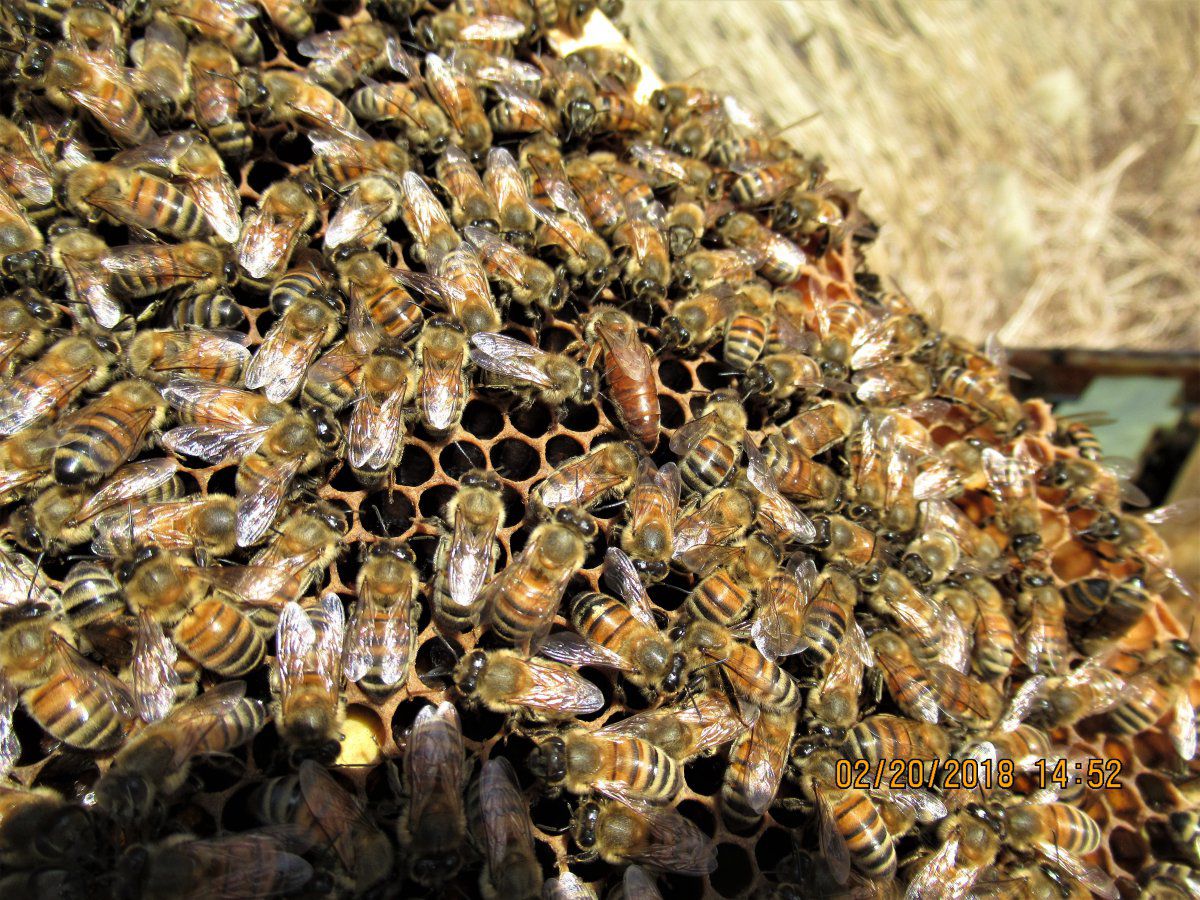 brokensword said:
I bet this makes your job a lot easier...
Click to expand...

Esp this time of year. During the summer no need we just open the hives.

@addy1 when you say you pick the queen once you find her, does that mean you kill her?

In the mean hive yes, we hate doing it but there are times you must. We pinch her, ie quick death.
We will, most likely, try a split first. Sometimes that calms them down. Make the hive smaller and create a second hive.

When i was a kid the neighborhood Grandpa Charlie had Bees i helped him a lot i got all dressed up in a suit . was definitely a joke as it was an adult suit and i was like 11. But i found it very cool. I don't remember it being quite as technical as it is for you but i may have just been young too. But i know Charlie loved when a hive fled to a pine tree and i climbed the tree and laid the branch back at the hive and they did go back to the hive. It made Charlies day i think he had 4 hives if i remember correctly i do remember they were only two layers high. I miss good old Charlie i hadn't thought about him in years
Ad

Before 1986 bees were easy, put boxes out, put in bees, harvest honey, done. And back then you had clover, dandelions, fields of flowers, weeds, Now we have mono crops, GMO, roundup kills. We fight mites from Asia, hive beetles from Africa and now another mite coming around that they have no way to control. I will be out of bees before they get here.

And the mites get resistant to the controls we use. One reason I just spent 799 on a OAV Ez pro to treat the mites once a week with the acid. The mites have not become resistant to it. We have been using OAV but we had a wand set up, 5 minutes per hive, which does not sound like a lot but 10 hives takes about 1.5 hours. With the new system, 20 seconds per hive. So we will treat more, every week and hopefully not lose any more hives over winter. I must wear a really good respirator, eye protection because you are standing in a cloud of Acid vaporized. The real danger is to your lungs, breath it in and your lungs will weep become wet and you can not breath.

The bees in Asia have learned how to live with the mites, our bees have not.

addy1 said:
In the mean hive yes, we hate doing it but there are times you must. We pinch her, ie quick death.
We will, most likely, try a split first. Sometimes that calms them down. Make the hive smaller and create a second hive.
Click to expand...

Sorry for my typo, I meant pinch not pick......and I understand, was just curious.

NEEDLESS to say that was a bit before 1986 Just a little ..
I know or i should say i have heard how bad it is for honey bees today.. i do remember as a kid being in the fields and recognizing the different bees and wasps which you had stay away from and which were ok so long as you didn't threaten them. The honey bees i didn't have an issue with when it was a handful of them in a bush or flowers. but when it came time to smoke the hives i hid in the suits. Theres another bee about the same size as honey bees that are more blakish and hairy that were so tame we'd play with them they would walk from figer to finger or you could place it in your buddies ear. LOL no matter how many times you handled them when they got in the ear it would make yeah freek out . Oh the memories. thanks for helping to keep the bees thriving addy
Ad

When I was a kid walking in the yard with clover blooming almost guaranteed you would get a bee sting. Now if you see a bee on the clover it is a blessing.

Here is a bit of the history of the mites.

More than 300 years after the initial introduction, a beekeeper also imported honey bees (and a very serious problem), perhaps from Brazil, despite a quarantine that had existed for several decades. That person was not the first to break the quarantine; all too often the quarantine had been ignored by others hoping to "improve their strain." Unfortunately, this time the imported bees harbored a voracious parasitic mite, Varroa jacobsoni, soon to populate all contiguous states and Alaska.

In September, 1987, colonies in some hives transported from Florida to Wisconsin experienced colony failure - the first recorded case of Varroa infestation in this country. A spot check around the nation that Fall revealed the presence of Varroa mites already in a dozen states.


The Varroa bee mite (Varroa jacobsoni) was first discovered by A.C. Oudemans in 1904, as a parasite of the Asian honey bee, Apis cerana. In the late 1940s, Through movement of the western honey bee, Apis mellifera, colonies into and out of Asia, Varroa mite became established on honey bees first in Africa and then in Europe. Quickly, it spread around the world. It was first detected in the U.S. in 1987; Mexico and Canada quickly closed their borders to U.S. bees. Varroa has now been in the U.S. for over two decades and a robust history exists in a number of formats.

One reason the mite is so damaging is that it is relatively new to the Western honey bee (Apis mellifera). Most parasites have evolved mechanisms so that they do not kill their hosts, in the long range disadvantageous. Thus, the original host, Apis cerana, is somewhat resistant to predation by mites. However in temperate areas, almost every Apis mellifera colony infested by Varroa will be killed unless there is intervention to reduce the mite population. There is mounting evidence, however, that certain European honey bees and other populations might be somewhat resistant/tolerant and incipient breeding programs exist to cultivate and enhance this trait. At the moment the Russian Honey Bee Breeding Program and those based on removal of mites through colony hygiene are the most promising. Read contributor Randy Oliver’s ideas on the possibility of breeding honey bees more resistant to Varroa now and in the future.