Clearing out clay in my pond

I'm new here and this is only my 2nd thread. Two nights ago we had major downpours throughout the night. I woke up to a muddy pond. I think I know where the problem is coming from, but this isn't the first time we've had this happen to the pond and I thought I'd fixed it. We have that low, muddy area just behind the pond. Last two times this happened we didn't have fish, so we just drained the pond, washed it down and refilled. Now we have 7 goldfish so I spent all of yesterday using filters (batting and air filters), per advice I found here, trying to filter out the clay. I haven't noticed any difference in the cloudiness. We have city water so I'm concerned about taking too much water out and refilling but I also don't want to spend the next several days or a week washing filters.

I have batting/filters at the skimmer, several layers of batting placed in various spots on the waterfall, and around the fountain intake.

I'm hoping my fish are okay.

Raise the edge of your pond by 3 or so inches. Make a berm. That will help prevent the mud from flowing in.

thanks addy - we actually put a berm around the pond. It worked great for normal rainy days. It's probably more like 6" but apparently that wasn't enough on that one side for heavy downpours. Also, I think there is a problem area near the skimmer. Once the ground dries out a bit more I hope to work on that. Right now I'm concentrating on clearing the water. Any tips for that?

A lot use quilt batting, put it where there is a good flow through it. Waterfall pump return etc. When it gets full of mud pull rinse repeat.

That is a LOT of mud to try and filter out with batting...I had this problem (not quite as bad but close) when I lived in Virginia...The mud will settle, the fish will probably be fine..after all, they actually raise koi in mud ponds.I would just concentrate on building up the low side of the pond with something more than a dirt berm since we have been getting strong downpours all over...How are your masonry skills?

thanks Addy! That's what I've been doing, and I'll just keep at it.

@rubyduby - funny you should mention masonry... I've been thinking about a wall! We have leftover stone from the wall in the background and I was thinking about using it. We have some of it already under the liner as part of the berm, but clearly, not enough and not actually a "wall"
Ad

Quickest solution would be to drain it down, catch the fish, refill, treating the new water for chemicals as necessary and reacclimate the fish to the new water conditions. Depending how cold the water is out of your tap, you may have to take a while on the reacclimating.

Watch for disruption to your ammonia cycle but I suspect you will be fine. I am thinking just large water change, not a thorough scrubbing.

You could also do a series of smaller water changes, leaving the fish in, and eventually it will clear with the filtration as you are doing.

Debx6 said:
thanks Addy! That's what I've been doing, and I'll just keep at it.

@rubyduby - funny you should mention masonry... I've been thinking about a wall! We have leftover stone from the wall in the background and I was thinking about using it. We have some of it already under the liner as part of the berm, but clearly, not enough and not actually a "wall"
Click to expand...

Could be a plan

I wanted to update what we did. After spending a day and half using batting and washing it every hour or two, we decided to drain the pond leaving the level just above the 3' well for the fish.. I shop vac'd the mud I could get to and was able to buy de-chlorinator locally. I added water, and the fish have done very well, and my pond is clear again. Thanks for everyone's advice. Now that we don't have rain for the next week or so we've been working on the mud-pit behind the pond.

I would add a way to divert the muddy water away from the pond. You're bound to get downpours like that again in the future and you want to do whatever you can to prevent that.

You already have a berm which seemed to not totally cure the problem.
I would dig a trench in front of the berm. You can lay perforated pipe in the trench pitched toward wherever you want to guide the water. You can cover the pipe with gravel. I believe they normally wrap the perforated pipe in some type of fabric to prevent silt from building up in the pipe.
Maybe someone here can chime in and give you the exact specs on what to use.

I did trenches, some perforated pipes, also sloped the land away from the pond. My pond is at the bottom of a 25 degree slope. I went out everytime it rained and watched the water flow,corrected until it did not go into the pond.
Ad

Yes, definitely a French Drain is in our future. We dug up a trench and built up the berm more, and it seemed to work when it rained last (although it wasn't a big downpour). Our biggest challenge will be diverting water away as it is in a large low lying area and there's a good bit of distance away from and around the house. I plan to do that same thing @addy1 and watch for weak spots.... If only it would downpour during the day next time! LOL.

I will add some learnings as I have been building mine this past few months...

When I designed mine I ended up leveling out a berm all the way around that was slightly above the pond edge. I tucked the liner under it. So it served as a physical barrier to keep the muddy water out and keep the pond liner tucked away.

That helped a lot. But as others mention, with the heavier rains, I found some areas would fill up outside of that berm but have travel getting rid of the water fast enough which caused it to flow back into the pond, over that small berm. Building a bigger berm probably would have solved that but the issue was only in 2 areas which were very close to each other. This would cause the pond to get extremely dirty.

I have almost full clay and it would dirty up bad. I couldn't see past an inch or two. Mine though, would clear up within a few days. Mostly settling to the bottom (or filter).

Since it was just the two areas that were very close to each other, I ended up putting in a catch basin (with atrium style top since I'll be adding mulch and landscape to these areas later) which is at the lowest point near my problem area. I moved a little dirt and created a small divot to help bring water from other parts to this same part. That and as time goes on, rain will wear away some of the dirt and find it's way to this catch basin. So it should only get better and more water from areas get into this drain. I trenched some 4" drain pipe out to my dry creek bed that runs at the back of the property to a real creek. I spent time in the shed every time it ran to see how it all flowed and just a few more tweaks to make sure it all goes to that catch basin.

This catch basin at the lower spot has taken care of all my issues (as of right now). Even some of the other areas will run back to this catch basin to get all that water out. So far it has handled well. Every time I make any changes as I finish up the landscaping, I go out when it rains to just verify. You never know for sure what is happening unless you see it happening real time. But do not wear flip flops... I've had them get stuck in the clay many times. Always fun...

Trenching that 4" pipe was some work though. One other option if it is a big issue for you is put in some sort of sump pit. You can get a sump pump and push that water out somewhere without running the larger pipe. You can run a garden hose or poly pipe. It will be easier to trench and even possibly just lay the house on top, hidden by rocks (or something else). Just keep in mind winter and freezing if that becomes and issue for you.

I've done something similar with the sump pit. My gutters for garage and house run down into 4" pipe that runs across my yard to the creek. Unfortunately, when planning out my pond, this area is lower then my pond. So I couldn't naturally feed that rain water back into my pond to refill. Pond was put in to hold water for irrigation in my yard (FYI). I ended up putting in a sump pit in. I run the 4" pipe that went to the creek into the sump pit. I have an over flow 4" pipe put in that goes back to the creek 'JUST IN CASE' the pump I have in there can not handle it.

I bought a 12V DC pump with float/auto shut off and placed it at the bottom. I wanted DC for the safety of it. I ran landscaping wire with my other landscaping wire over to the pump. I bought a DC power converter and basically feed that pump 24/7. So as rain travels down to the piping and eventually drains into this pit, the pump kicks on / off and fills my pond. I have a simple check valve in place too. But it has worked wonderfully.

So technically, you could do something similar but instead of pumping 'to your pond', you would just push away from your pond. No different then what a real sump pump in the house does. I can get you the exact list of things you would need to go this route if interested. But it would cost some money. Probably $100-$120?

But I understand the clear water. It bothered me so much to have the dirty water after a rain. I spent some time getting it cleared up but really, catch basin to move water away from the pond naturally really helped. But I could see the sump pit / DC pump idea would work just as well, if you can't naturally let the water flow away (or do not want to trench a 4" line away).

Ignore the mess in the pictures. I'm still in the process of finishing up landscaping and cleaning up the edges. It has been ongoing work. Still lots of rocks and plants to place. I'm also finishing up the grading where the sump pit is. I just put that new pit in a few weeks back.
(CATCH BASIN) 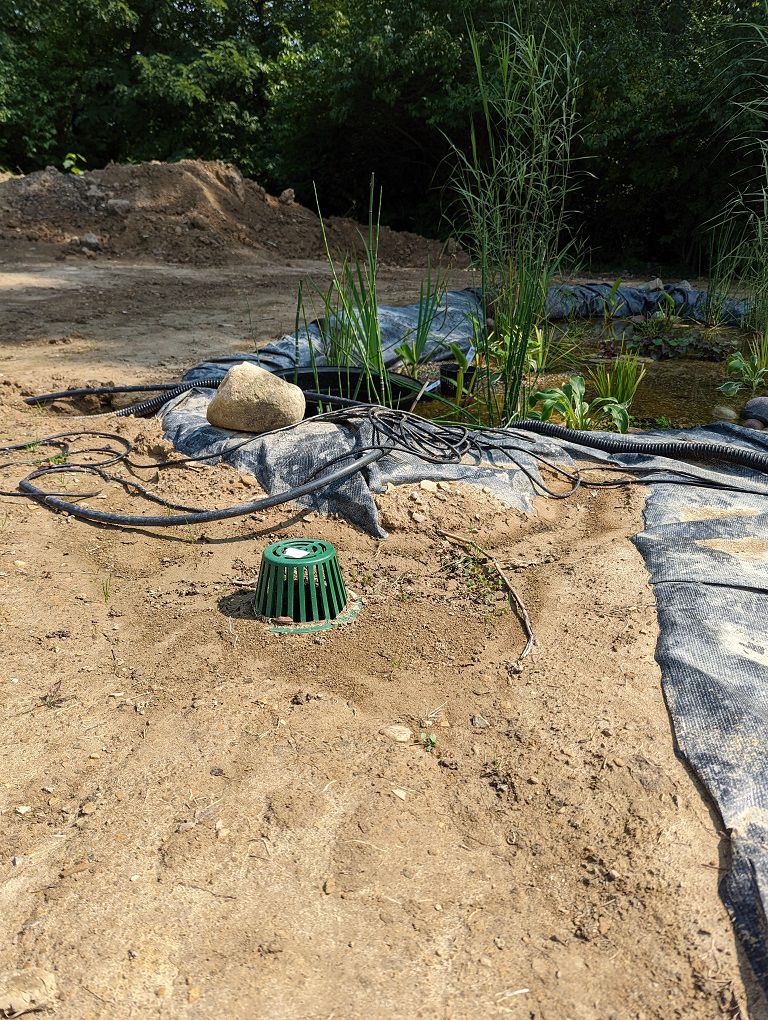 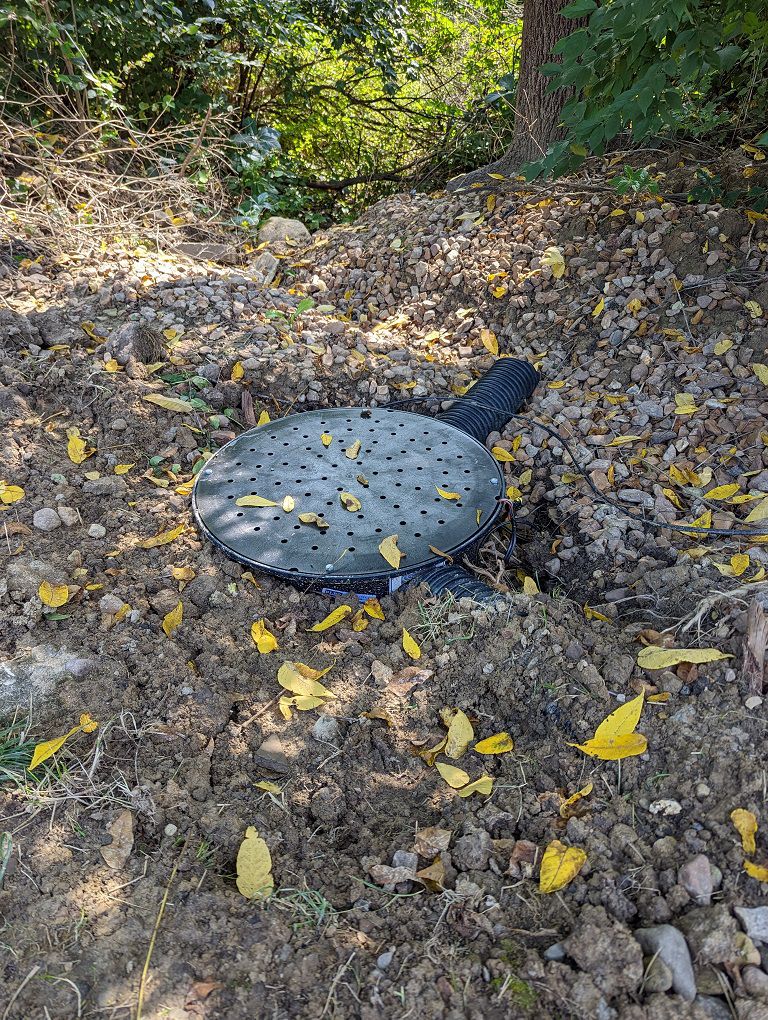 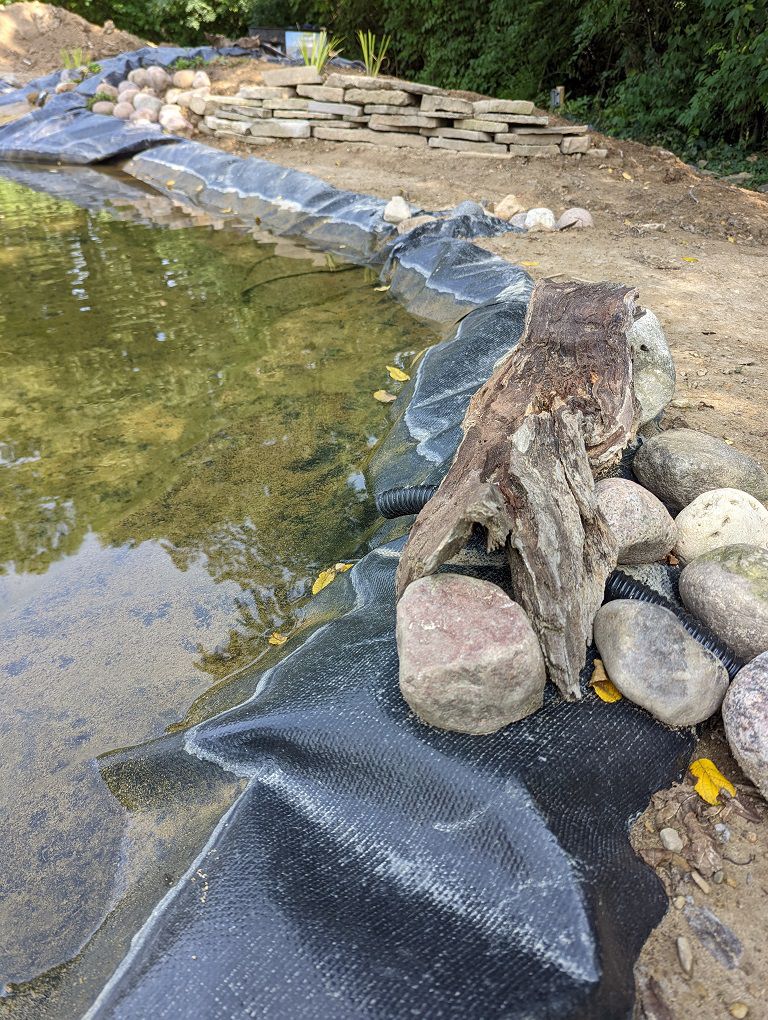 Thanks @Wildneg - that is very helpful information - with photos! I've seen some mention of catch basin's in my research about low lying areas in the yard. Thank you for your ideas. More to consider.