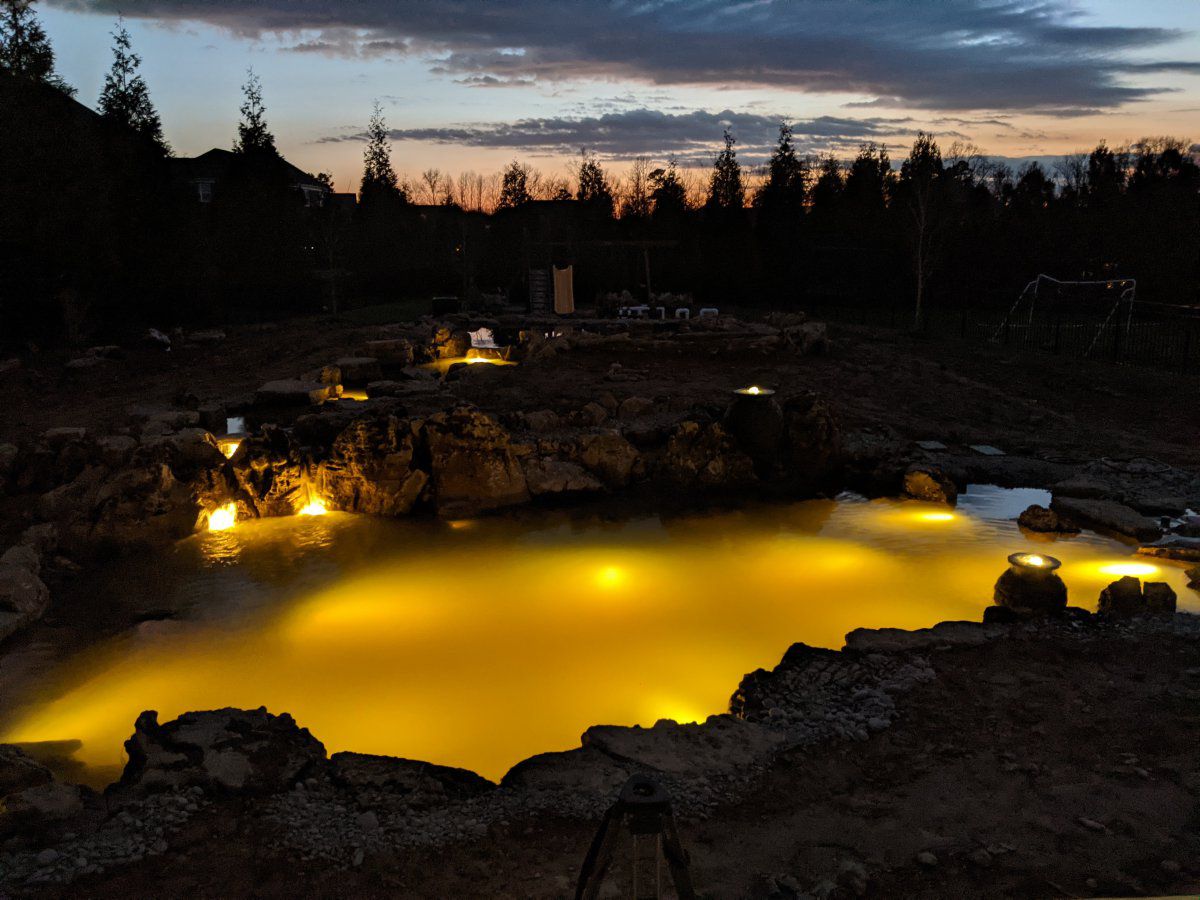 Darksaber Pond - My Next Adventure

All the babies have started coming out of the pond so that's been interesting to watch.

I built a fish cave with 14" pipe and covered it with rock.

Had some issues with the smart plugs but they sent me new ones and I'm hoping that sources the issue.

Smart plug = receptacle that can be controlled remotely/wirelessly or with automation.

GBBUDD said:
Ah for some reason was stuck on a different kind of plug
Click to expand...

those would be the 'not-smart' plugs, GB!

Hey @milonedp: How was the new pond this summer? How did the landscaping and lighting go? Want to share some updated pics with us?
Ad

combatwombat said:
Hey @milonedp: How was the new pond this summer? How did the landscaping and lighting go? Want to share some updated pics with us?
Click to expand...

I get the image of Momma addy standing on shore, some of her kids holding her hand to either side and others bumping up behind, sad little faces with tears forming. She's looking across the vast distance to a mythical place called 'Colorado', the feeling of abandonment severe, while a bunch of bees try to nest in her hat!

The camera pans the mute little faces until it stops at lil Lisa and CW as the former details the whole negative edge idea to the latter who is drawing pictures with a stick in the sand, the words 'must research this' coming over and over... In his other hand, he's holding what looks like a Barney doll, dangling and depressed because it knows there's still so much to do...

Behind, burly and feeling his oats, a larger kid is leaning on CW's shoulders, mumbling something about hogs and bogs too. He keeps scaring the newbies with words like 'Up Shit*s Creek, 'down Deadman's gulch', and 'last chance Harvey'; it scares them because they don't know any 'Harvey'. It'll be magnified by their equally scared looks while spellcheck tries to decipher what he's sayin'!

Then there's the lil girl playing with a bunch of tortoises; she's asking for pics but all the new kids in the back have glazed looks.

Another girl munchkin is listening to the Pennsylvania kid say he's not only the prez, but is a customer too, but she's calling him nuts and though she WISHES she had a bog, insists there's absolutely no room in her 'always-wetland' home. He'll smirk and know better! Of course, she'll point out that he's smitten with DOTs, the new girl to the group.

An animated group of girls are commenting on lotus and snails with one explaining how lil snails are made while another thinks Cha Cha is a keeper! Both think the boys arguing next to them are silly.

A wee lad with saltwater stains on his trousers, is trying to convince the Mom-of-all-turtles that there's OTHER kinds that might appeal to a girl--and they gots DIAMONDS in 'em!! He'll speak in jibberish, though, using all sorts of letters instead of words, insisting it wasn't his fault, that some broken lick of a saber caused the disease to not only spread, but THRIVE!

And of course, the tussle-haired boy hovering annoyingly close is hearing such slander but ignoring it because he KNOWS some of those that wander are NOT lost...

The group turns as one when he burps out 'sheesh!', noting how full of BS he is; the boy's eyes open wide and he politely inquires 'moi? Well, DAYUM!'

The laughter that follows isn't something that can be conveyed accurately enough!!!

Still, the murmur of echoes pervade, a steady chant from @reefsr whose whisper won't stop coming 'our Michigan army grows...'

(somewhere across the Pond, the ivy-encrusted walls of Castle Ian, shiver...)

Can someone call in a welfare check on @brokensword? What are the laws in Michigan for involuntary commitment?

combatwombat said:
Can someone call in a welfare check on @brokensword? What are the laws in Michigan for involuntary commitment?
Click to expand...

nuh nah; I already got white walls, CW; now, if they'd only upgrade the mini-bar a bit...

brokensword said:
nuh nah; I already got white walls, CW; now, if they'd only upgrade the mini-bar a bit...

Ironical, isn't it? A broken sword calling out a dark saber...heh heh
Click to expand...

But are they padded and involve you in a straight jacket.

Hey Haven‘t you learned I don’t let my jibberish or the truth ( you forgot I like to answer in tiny words that require you oldies to pull out your reading glasses) get in the way of a story Or response.

Jhn said:
But are they padded and involve you in a straight jacket.

Hey Haven‘t you learned I don’t let my jibberish or the truth ( you forgot I like to answer in tiny words that require you oldies to pull out your reading glasses) get in the way of a story Or response.
Click to expand...

padded? What's that? Well, jhn, hard to see much behind the chicken wire, you know? Pads would be nice...now, can you do anything about that mini-bar thing?

And sorry no, they don't give me no jackets; just flannel pjs and fuzzy slippers that sorta look like fish (I asked for kitties but you know, the help here got a bit koi about the matter!)
Ad

The last 5 replies on this thread are exactly why build threads are 50 pages instead of 5. Don't know that I'd want it any other way, though.

Well that was something...

Sorry folks I spent so much time on the pond early in the summer and then took a new job so I've been a little out of pocket for a while. 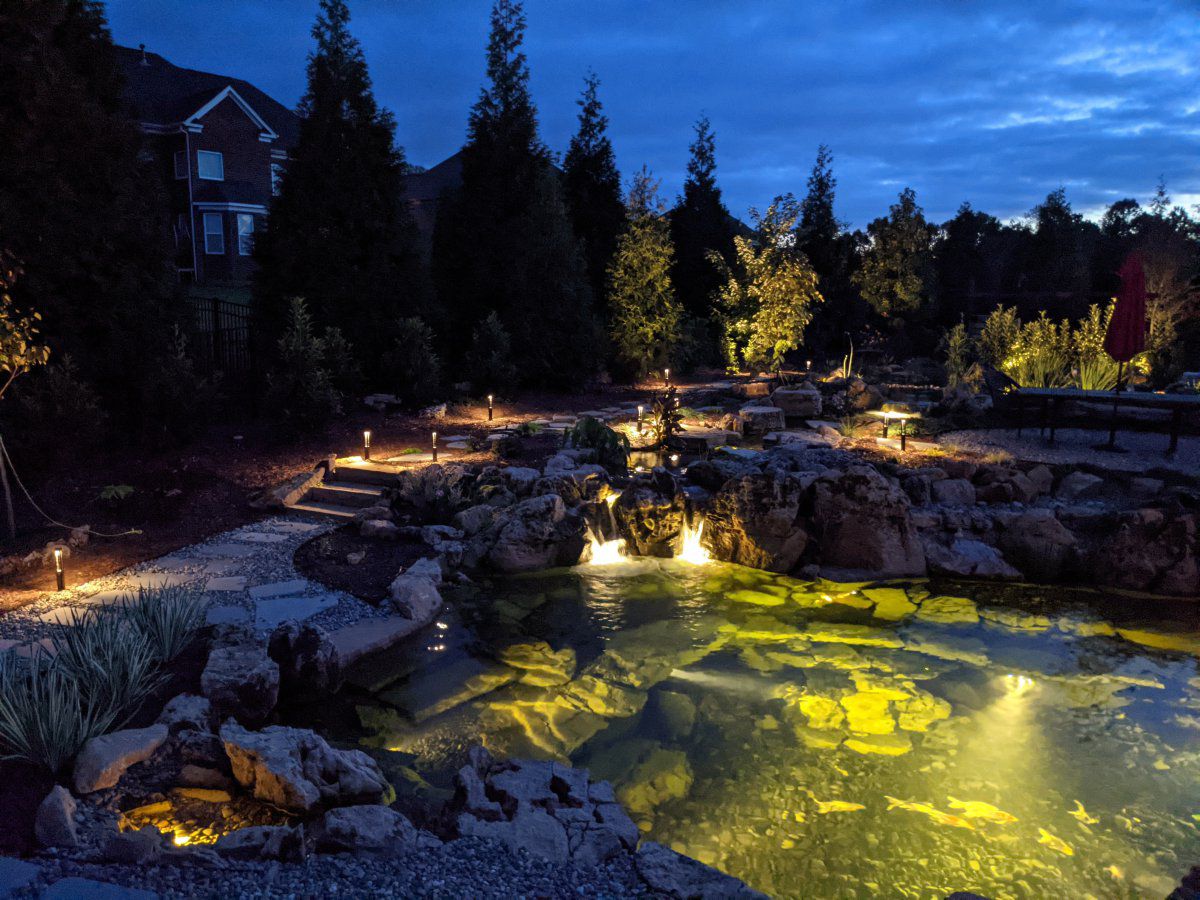 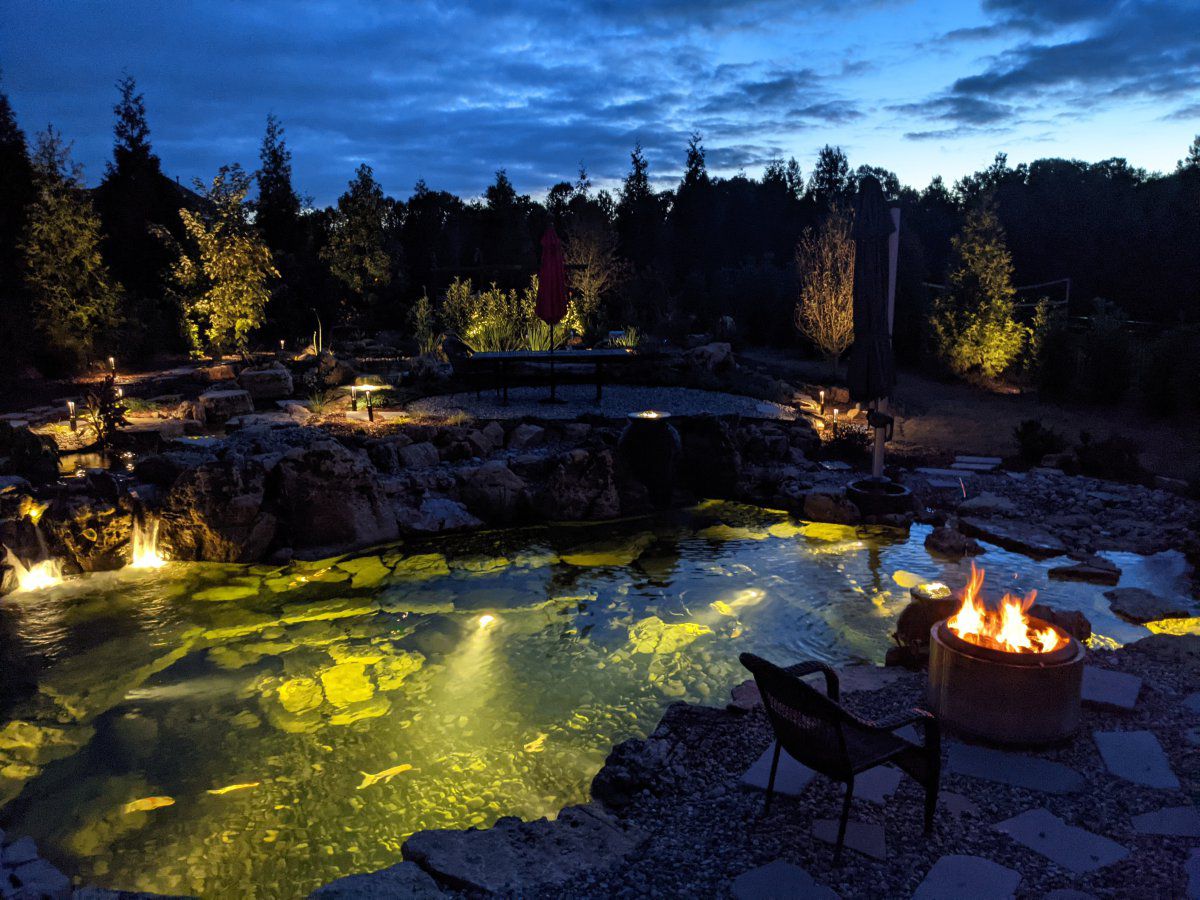 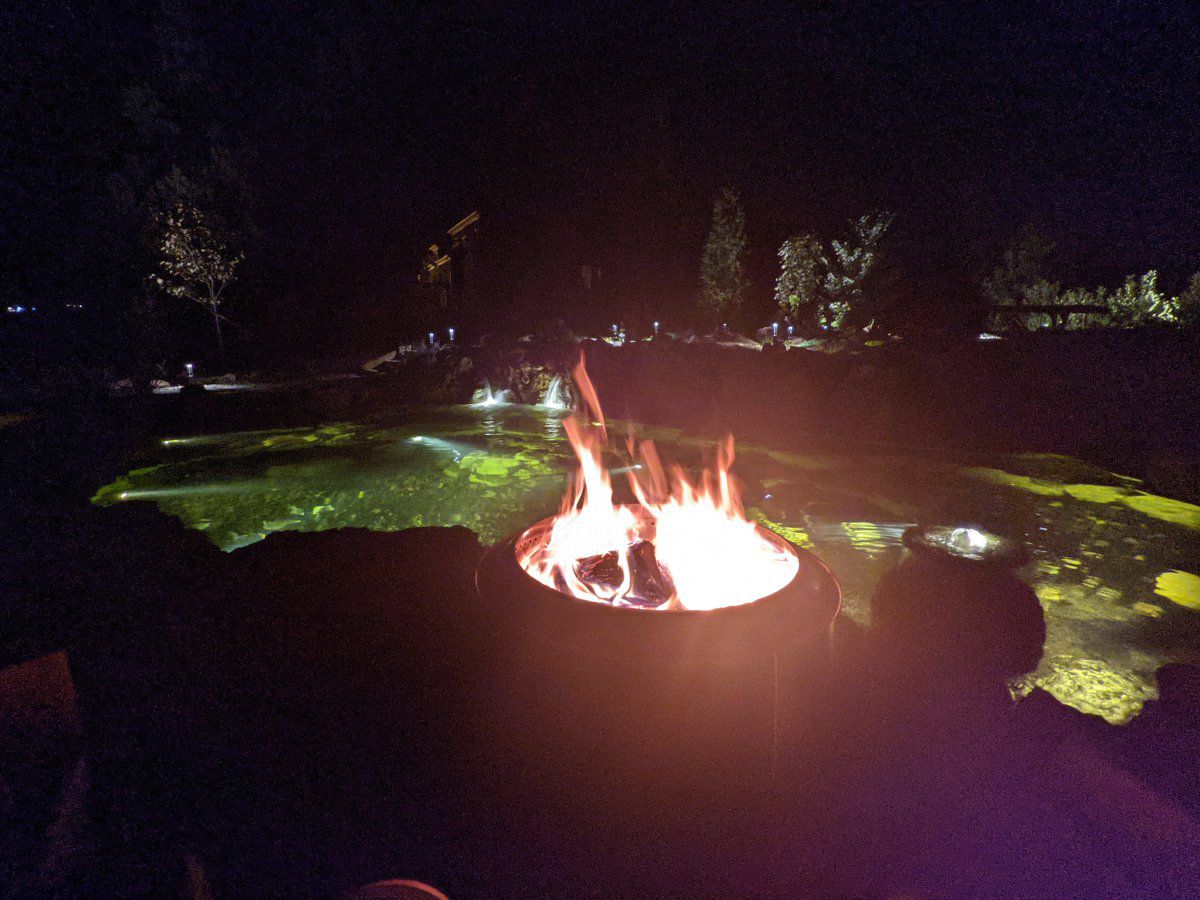 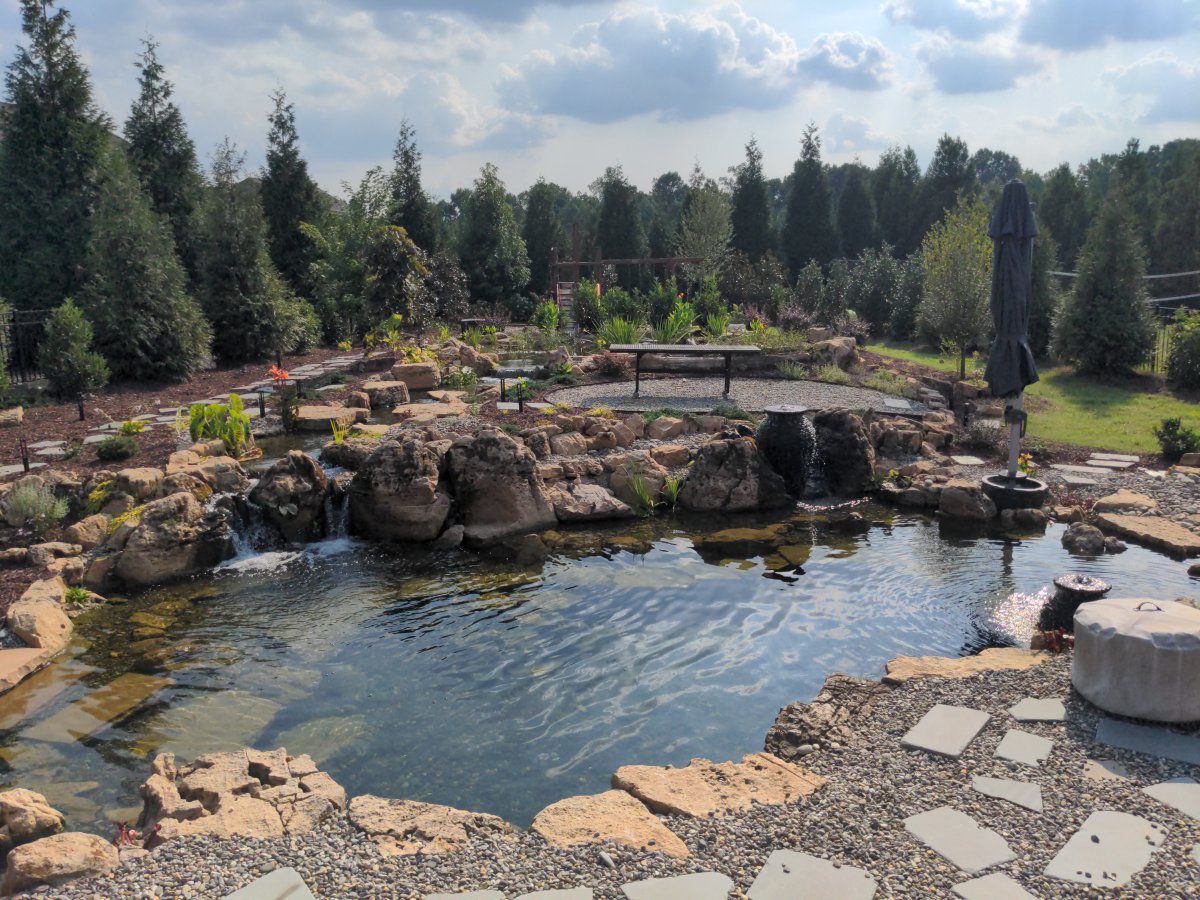 Way to deliver! Looking great. And that umbrella is awesome.

1. Any new pond syndrome to deal with?
2. Any issues stirring up sediment when swimming?

Looks great. I'm sure you have spent many many an hour there
Ad

Oh. My. Gosh. A picture is indeed worth a thousand words. That's a masterpiece.

If i rebuild i hope to use that weathered lime stone it has sooooooooooooooooooooooo much character Love that stuff stuff great choice spending the money on that one.

combatwombat said:
Way to deliver! Looking great. And that umbrella is awesome.

1. Any new pond syndrome to deal with?
2. Any issues stirring up sediment when swimming?
Click to expand...

No, I haven't had any issues with new pond syndrome, I think there are just two few fish for it to have made a difference in the 13,000 gallons.
Sediment hasn't really been an issue, remember though I spent 4 weekends (3 full washdowns) trying to get as much silt and mud out as I could. It stirs up a little when they go swimming but only enough for me to notice, others don't seem to be able to really tell that you can see more suspended particles. They settle back down in a few hours or less.
Ad

While text input is great we want photos........................... Don't make me have to come down there to have to get some quality photos . and a underwater video and a video period walk around the pond watching the pond come to life it very cool looking back year to year