Guess who is out having fun? (It's ME!) Planning wildlife pond for backyard

Hey everyone! I have finished dismantling and emptying the raised veggie beds in the backyard and now I'm playing and planning.

If you missed some of my initial ideas, this started (in my head) as a small "frog pond" with still water, filtered only with plants. Then I decided out of fear of mosquitoes and general grossness, that perhaps I COULD run some electrical from the side corner of the house -- white square would be electrical box. Dotted line would be underground conduit of PVC for pump cord.). Now my frog pond has become a wildlife pond. We have tons of deer and other critters in our backyard anyway. It would be fun to attract more birds and bees and butterflies - and give the deer a place to have a drink!

I want to have a bog trickling into the pond -- where the ground is naturally high and at the end of our dry creek -- which ended awkwardly. I think the bog could look like an end to the "creek." I want to make a stone "beach" intake bay as a type of skimmer.

So far, it's only manual labor and spray paint, but I am having fun! 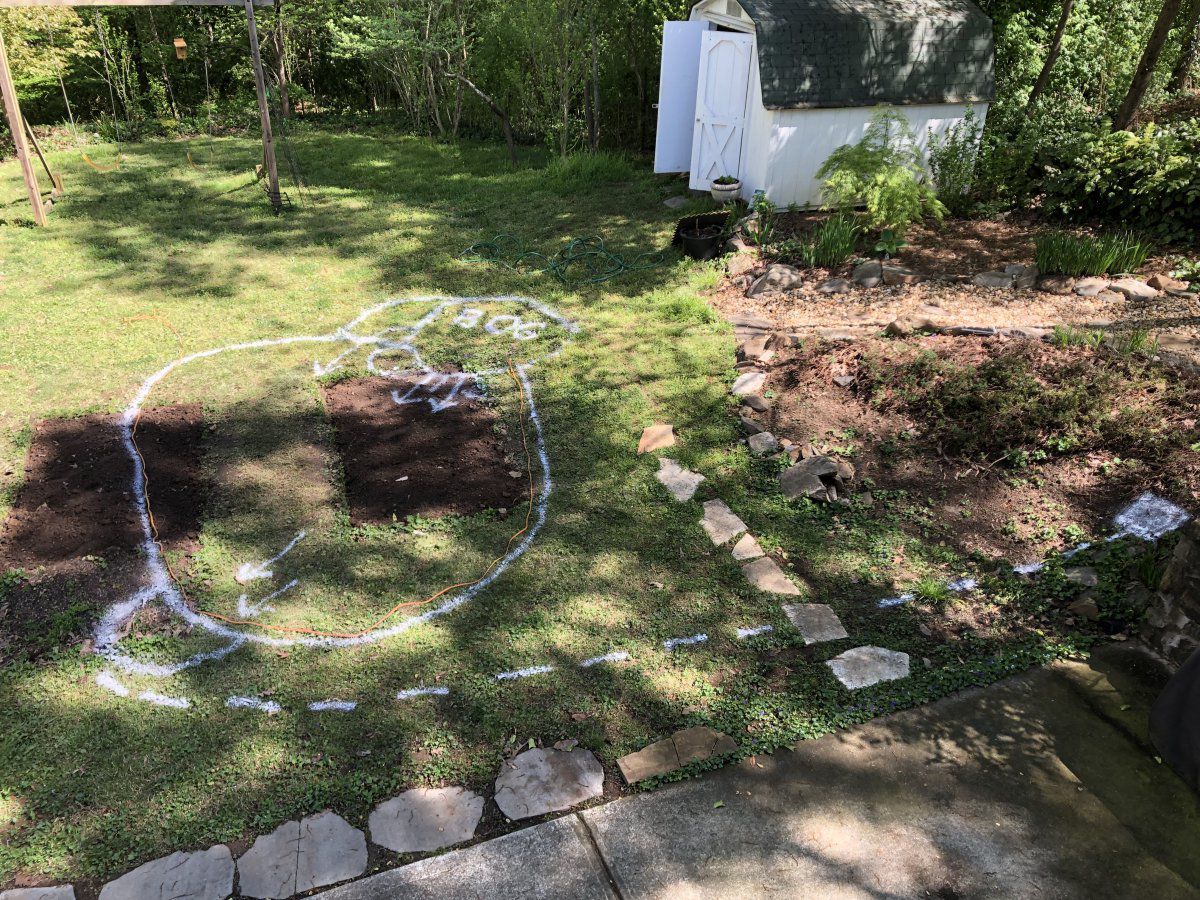 Have fun playing, looks like you have a nice day for it and some good ideas
Next you will need a camera mounted out there so we can all see what comes to visit.
B

I originally planned to do it all with one piece of liner -- but I think the bog will need to have its own liner - doing the overlap like for a waterfall.

Are you gonna get that liner that @addy1 has in her big pond that seems to be pretty deer resistant when they walk on it or can you make it so they can't walk in there?
B

I'm going to rock it and was actually planning to use a method I learned from The Pond Advisor in the UK. He does underlay, 45ml EPDM, and more underlay on top of the liner (I guess then it's overlay) followed by rocks. I'm hoping that would be good. The pond will be heavily planted almost all the way around, so I'm hoping they would just stick their head in for a drink, instead of a bath. HOWEVER now that I think of it, we had a BEAR wander into the neighborhood last year - I hope HE doesn't want a bath! (That was actually a very rare situation and will likely never happen again.)

Um, you might need to concrete it if the bear comes back!
Ad

Have fun planning and building!
B

Here's the latest. I've almost removed the grass from the area but I have a few more strips of sod to go. I'm leaving walls between the main pond and bog and main pond and intake bay. (Intake bay is going to be at lower left.) I already have a customer coming to check it out!

bagsmom said:
Here's the latest. I've almost removed the grass from the area but I have a few more strips of sod to go. I'm leaving walls between the main pond and bog and main pond and intake bay. (Intake bay is going to be at lower left.) I already have a customer coming to check it out!
Click to expand...

She yelped you - says she's looking forward to the grand opening!
B

The birdhouse is occupied by a pair of wrens. I have bird feeders up along the side of the house by the dry creek, midway between the front and back yards. The birds (cardinals, finches, bluebirds -- all kinds of nice songbirds) have a flight path going. They come from across the street (where there are woods) to my front yard, over the front pond, past the bird feeder and down the dry creek to the woods out back. It's like a major airport out there. I think all the wildlife will benefit from adding these "natural" areas, like the pond.

bagsmom said:
I'm going to rock it and was actually planning to use a method I learned from The Pond Advisor in the UK. He does underlay, 45ml EPDM, and more underlay on top of the liner (I guess then it's overlay) followed by rocks. I'm hoping that would be good. The pond will be heavily planted almost all the way around, so I'm hoping they would just stick their head in for a drink, instead of a bath. HOWEVER now that I think of it, we had a BEAR wander into the neighborhood last year - I hope HE doesn't want a bath! (That was actually a very rare situation and will likely never happen again.)
Click to expand...

A few weeks ago, our neighbor heard noise out back and found two bears swimming in their pool.
Ad

Here is a picture of today's efforts. I went all around and took out more sod where flower beds will be. This way, when I'm digging the shelves and the different levels of the pond, I can go ahead and toss my dirt up on the sides to get everything level - and to add soil to the planting beds. 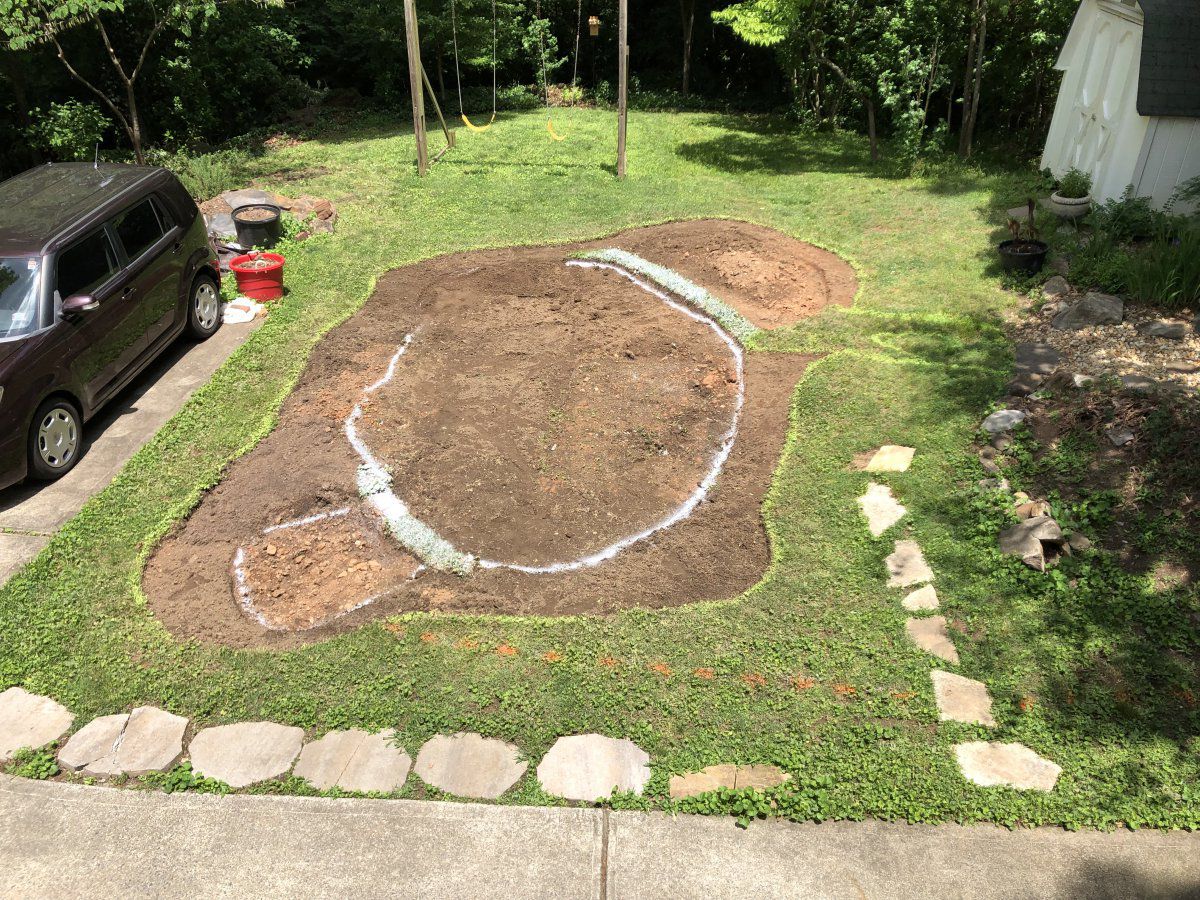 This is @addy1 - but I'm thinking other people could benefit from this info exchange. First, know that I am mathematically disabled! Seriously. Can you help me think about my pump? The pond is going to be about 10 x 15 -ish. I plan to have a sloping beach for easy critter access, going down to a 2 1/2 foot depth. The top right will be a bog. Down at the lower left there, I'm doing an intake bay. I've watched Mark The Pond Advisor make a pump vault out of an aqua block. For my area and budget, I think this will work great. He said that you don't want a pump inside an aqua block if it is more than 850 gph, because it will suck in and collapse the aqua block. I think, based on what I read elsewhere, that this should be ok. With a bog and an intake bay, I don't want a super powerful pump anyway, right? The bog will be just above the pond level. I'm not going for a tall waterfall. Just enough height to overflow the bog and spill into the pond for a little movement. I know I'll need to work with more exact measurements after I dig. But for now, I'm just estimating. Do you think I'm on the right track?

lol I don't follow the pump rules, may not be the best to ask. Mine only turns over my water once every two hours.

Going by the size you mention above and giving it around 1.5 feet average depth, it is around 1,600 gallons. A 800 ish pump would work. The rules say you should have around a 1600 gph pump. I depend on my plants to take care of the water and they do a good job.
You will get water turn over and nutrient removal with a nice flow through the bog plants.
B

Update: the new pond almost became a butterfly garden. We found out about some unexpected expenses for our college aged son. He is going to live in an apartment that fulfills the "on campus" requirement but isn't technically run by the university. Instead of a 10 month lease, he has to do a 12 month. My husband went into major anxiety mode, since the apartment was already a little more than we wanted it to be. Then add on 2 more months. Then add on a security deposit, which the dorms don't require. MY response was to say oh crap, I will deposit the $800 cash I have saved to help with the extra expense. I can just turn the area into a big garden and fill in the hole for the intake bay. I bought aqua blocks that I can't return -- I could just make a bubbler millstone fountain with that and it would all cost a lot less. After the hubby chilled, we had a talk. I offered to switch gears but he really wants me to go ahead with the pond, which is sweet and unexpected. He is a saver, not a spender. Current plan -- explore different loan options and realize that over the course of a year, this isn't that much more money -- and he can move elsewhere next year if this isn't doable. AND -- I get to keep digging!!!!! Heading out there right now, so I will have more photos later!
Ad

Hey it's only money @bagsmom and might as well get some enjoyment out of it too.
Your son will be happy you get to have your new pond

I'm glad you're going ahead with the pond, it's gonna be great!
B

Here are some shots of my progress. (Note that they are not exactly in logical order. Should be water in the hole, then tracks, then the other two.). I'm working on digging the bog right now, trying to build up soil on the low side and make everything level. It's slow going in this hard red clay. You can see in one shot that I had to use water to help loosen things. That high spot that looks like a dividing wall in the water was a giant clay boulder. You can't bust them up with muscle. You have to find the edge and get under it, then pry them out. I finally did that and now I'm working on the sides and final shape up of the inside. After the water finally percolated through, I saw that I'd had visitors in the night. I think these are raccoon tracks? Looks like big ones to the left and a tiny one to the right? Mom and baby, maybe? I feel like the critters are all coming to check on the progress of their new hangout!

Oh me oh my aching back! You are getting there tho.
Looks like raccoon feet to me and they wish you would hurry up
You must log in or register to reply here.