I've been ponding for about 20 years all together, my present pond is our second after we moved out to the country. My wife talked me into building one that's a bit too big and a bit hard to maintain. The pond is about 38 feet long and about 18 feet wide, 4 1/2 ish feet deep to 2 1/2 feet deep and unless my calculations are whacked about 11,000 gallons. We had a waterfall that I never really was quite satisfied with, feed by two pumps in the bottom of the deep end and a skimmer in the shallow side aided by the prevailing winds.

After about 5 years of use, last year we had a leak of about a 1,000 gallons a week. I took out all of the rocks in the pond as the water slowly receded looking for what I assumed would be a fairly obvious tear in the liner. During this process we set up a swimming pool to house to house the fish and transferred at least 200 comets that started out as a dozen feeder and 5 frogs. It sooner became obvious that the leak was else where, but I kept going because there was an unbelievable amount of muck. With the waterfall shut down the water level stabilized, so after a complete clean out of the pond, we added water and transferred the fish back to the pond for the winter.

Right now water has gone pea-soup and the fish aren't feeding vigorously while we're limping along with inadequate filtration. I'm upgrading my filter-fall as it had a large leak last year. I'm rebuilding and repumbing to allow dual 2500GPH pumps on the bottom, check valves in case one pump goes out and a venturi aerator, going through 3 inches of green Matula filter, then 50 L of K1 and the exit the 23 inch wide weir. The filter-fall is going to be built on a piece of EDPM liner so if there is another leak we don't lose a thousand gallons a week of water.
We have a skimmer in the North-East conner of the pond as that's where the prevailing winds push the flotsam. The pond has a waist in the middle which causes conter-rotating gyres separating the pond into an east and west half. I intend to place a venturi aerator at the waist in hopes of getting the gyres to merge into a whole pond circulation. In the past protein frothing from the water fall has been sucked into the skimmer when the winds were favorable and I would be happier if that occurred continuously; if the venturi doesn't do it, I'll add a second skimmer in the west half on the north side to skim any flotsam that doesn't make it to the east half. The skimmer on the East half has a 2000 GPM pump attached but the flow rate is restricted due to using 1 inch irrigation tubing to connect to the Bioclear 5 over by the waterfall. I'm going to replace the inch pipe with 1.5 inch PVC. If the flow rate overwhelm the bioclear I'll hook up something in parallel.
Ad

After reading your post, I am not clear on your total flow rate. You have three (3) pumps, right?

Meyer Jordan said:
After reading your post, I am not clear on your total flow rate. You have three (3) pumps, right?
Click to expand...

The 3 pumps should have done about 7,000 GPH by rating but I estimate about half that in the real world. It always seemed like I would do something to get by for a little while and a little while would become a long time. When the waterfall filter is rebuilt, I'll measure what he pumps I have are really doing and upgrade if needed. I'm assuming that switching from flexible sump pump tubing to real 1.5 inch shedule40 PVC will increase flow rate considerably.

Nice big pond! Sounds like the upgrades and repairs have kept you busy

Welcome budgenator.
With the large size of the rocks on the bottom of your pond, you're going to need a very strong water flow in order to dislodge the detritus and transport it to your filter.
I think the detritus buildup is what is contributing to your green water.

Welcome to our group!
Ad

MitchM said:
Welcome budgenator.
With the large size of the rocks on the bottom of your pond, you're going to need a very strong water flow in order to dislodge the detritus and transport it to your filter.
I think the detritus buildup is what is contributing to your green water.
Click to expand...

I took all of the rock out looking for the leak, but your right there was an unbelievable amount of muck down in there. Over the weekend I did find the hole in the liner on the waterfall/filter and dropped some parts in the water so I had to go in wading to find them and there still is more much down there than I thought there would be. At least now with a bare bottom I can get to it. I have the old waterfall torn out, the new started and have tested the last weir, and the second version of a venturi aereator is working well enough. 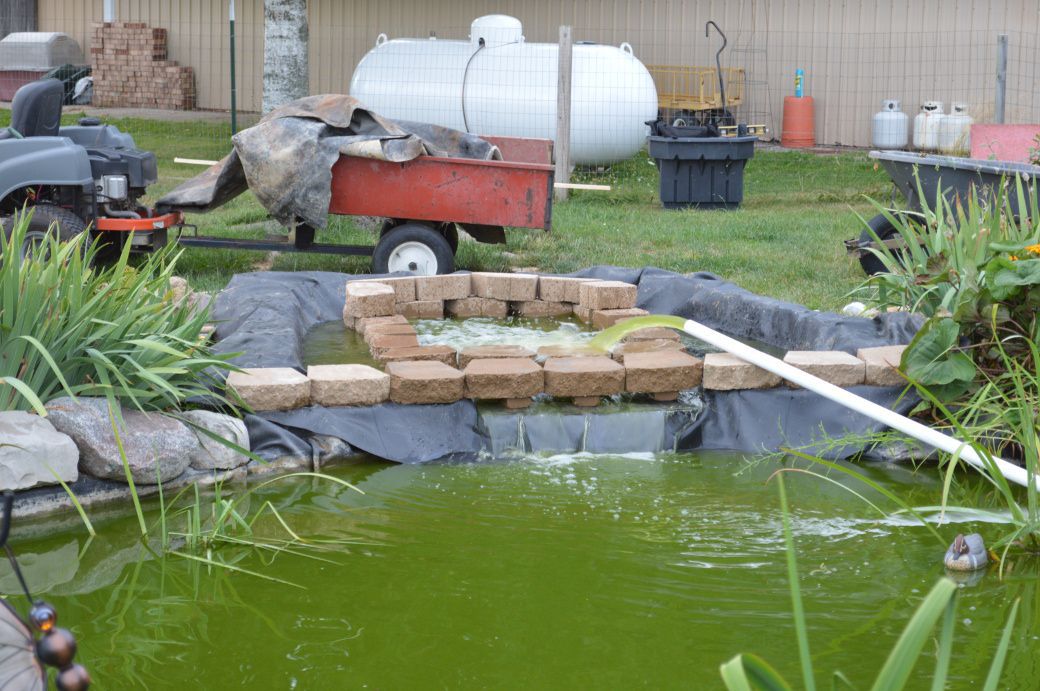 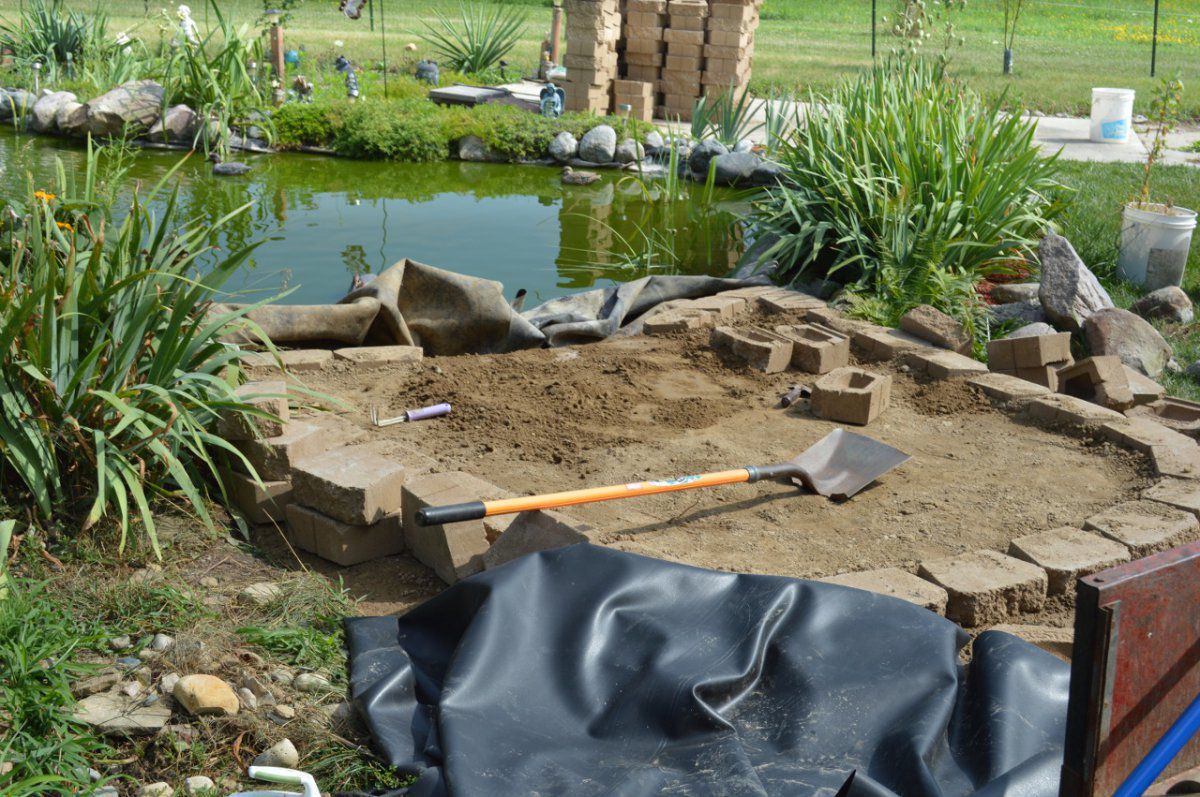 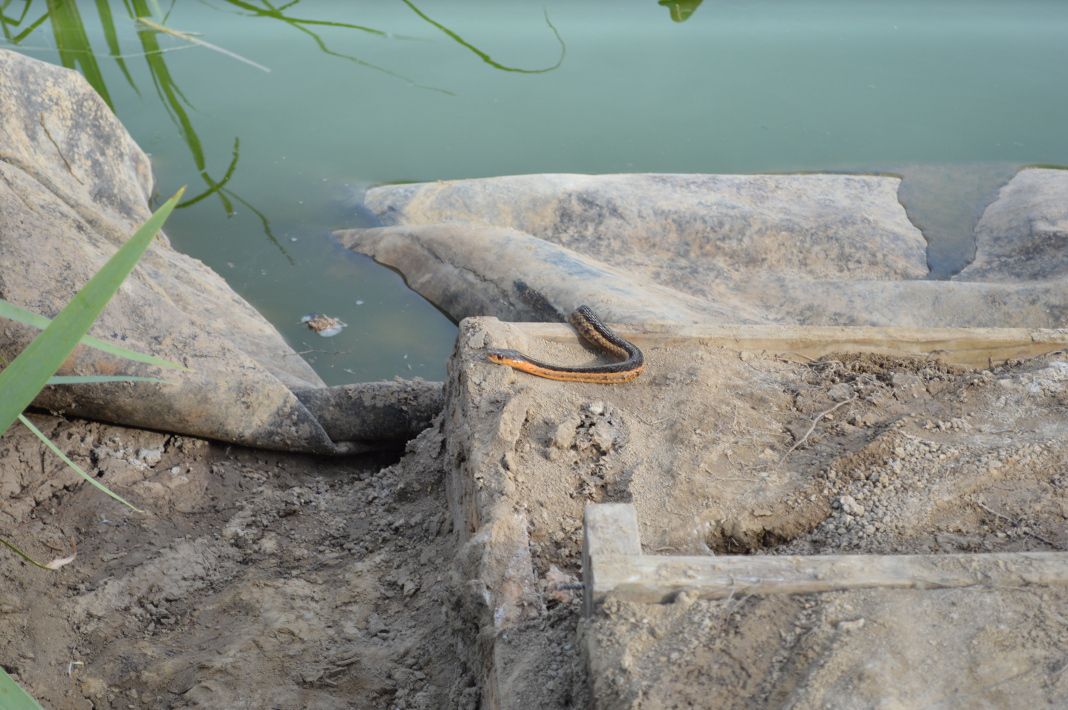