Hey everyone, my name is Aaron and I have a pond.
I just fell into this pond forum so let me get everyone caught up on my pond adventures. Six years ago, my mother lost her house, and she had a small preformed pond that she had for ever. She always said that there were fish, turtles and frogs in the pond but I never saw them. It was so thick with algae that a brick could float on the surface. When she lost her house I received the pond. It stayed in my backyard for about a year and one day me and my son decided to clean it up and install it in a small flower bed near our front porch.

As soon as we installed it, my son who is autistic started using it as a way to relax, so he would spend hours at a time sitting on the rocks and watching the fish. Then two years ago we had a severe drought. It became so dry that the soil shifted and busted a large crack in the side of the pond. I went outside and discovered that we had only about 3 inches of water in the bottom of the pond. I told a co worker about this and it turned out that he had a liner that he had won in a raffle and since he lives in an apartment, he decided that we could use it more. The liner turned out to be 17X22 so we dug up the back yard and had a nice pond going back there.
Then this past winter, we actually had a cold winter and for the first time the pond froze over. I was not worried about it because I used a small fountain pump and had the water going straight up and that kept a nice hole in the ice. My mother in law saw the ice on the pond and went into a full fledged panic and started breaking up the ice with a 5 lb sledge hammer and a steel pipe. So the liner go shredded. As soon as it started warming up, I replaced the liner and added a filter falls, and a skimmer.
Here is the current state of the new pond

As you can see I still have a huge amount of work to do to it before it becomes presentable. I need to lower the skimmer a bit, and move around several tons of rock. I did add a fish cave for the goldfish to hide in, everyone seems to love that. I'm having a small problem with the filter falls. It is not filtering out small particles and it is giving the water a dirty look. Got to figure that out.
Ad

welcome and hide the sledge hammer and all pipes .That will kill fish just by the shear noise of that being done .Looks like you are on you way back .Use quilt batting in a basket and let your hose run into it

Yeah, breaking the ice with force is a terrible idea. Think of the way a bomb explodes, there is a shock wave sent in every direction, same type of deal with pounding on the ice. If you'd like to keep a hole in it, you can use a heater or aerator, which is a good idea to give fish, frogs, etc. oxygen over the winter and allow gases to escape.

Your pond looks fantastic by the way! I can't wait to see it when its complete!

Thanks everyone. I was so lucky that none of the fish suffered any tragic fates, though all but one fish is only a year old. The old fish is three years old now, he is a common comet goldfish that my son won at a school carnival. He is solid orange except for a white spot on each flank. Because of these spots, my kids agreed to name him Fish Stick. He is about 7 inches long and is doing great.

Welcome! Quite the ponding adventures you've had! As Sissy said the quilt batting is magical!
Ad

next time just boil a pan of water and hold it on top of the ice as it melts and keep doing it until you get a hole in it .Don't pour it on the ice just hold the pan on top of it .

I have my quilt batting in my waterfall bucket. I wrapped my 'filter media' picture attached in the quilt batting.

I LOVE your idea of using a plastic flower pot instead of the bag! I am going to steal that idea. I will also put a few plants in the gravel to help hide my waterfall bucket. 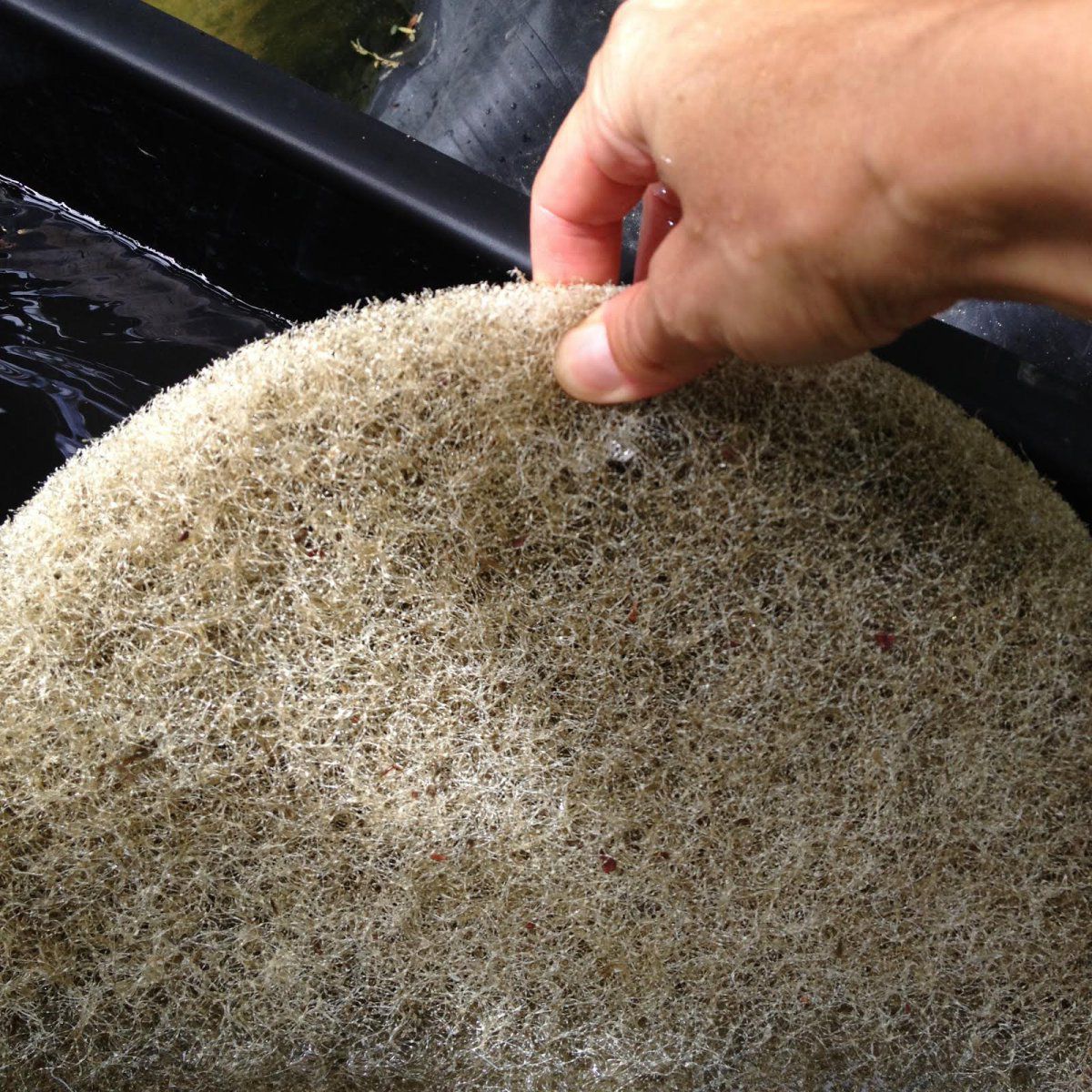 I have some miniature cat tails in the flower pot. You can see it at the top of the bottom picture. I just put the cat tails in and they are just now starting to grow. I will be glad to take more pics as they grow. My filter came with the same media that you have pictured. About twice a week I pull it out and hose it down. Not sure if how often I am supposed to clean it.
Ad

I have used lava rock in both my filters .You can try it that way but it really works better not sitting in the water .Does much better with water running into it .I soak mine real good in peroxide and water and it really helps get all the fine stuff and also helps pick up ammonia
Ad