My new pond is meant to be about water lilies and other plants, not so much about fish. (Mostly because of the heartache when the fish get eaten by predators, which happened with my last pond, but also the increased work to keep the pond clean with a healthy fish population.) I do want a few fish to eat mosquito larvae and also to look pretty, but I'm really wary because I don't want them to reproduce. I know it's hard to tell if goldfish are male or female, and I know some species can interbreed. Can anyone suggest a way to get a single gender population of 2-4 fish? Or several fish that can't breed? I'm willing to jump through a few hoops to make this happen....

Thanks in advance!
Ad

What zone are you in? If tropical works for you male guppies would do the job and are easy to sex.
D

I'm in zone 7, so unfortunately I don't think they'd survive. .

I only know of one sterile fish and that is grass carp which you certainly don't want. But... check this out:

The Utah Division of Wildlife Resources serves the people of Utah by managing and protecting the state's wildlife.

wildlife.utah.gov
You might be able to contact them and see if they can direct you to a breeder who can sell you some sterile native fishes for your pond. Just an idea. Another thought is to put a single goldfish in the pond. How large is your pond?
D

@Dogcatlady I feel your pain !! My pond and filtration, support my 4 adult koi....but not their babies !!! Every Sept. I have to lower the pond water and get in and catch all the babies, such a pain !

This evening while feeding my koi, I saw a baby from last summer....I was like OMG, seriously, I missed one !!!! Unfortunately I love my koi and have had them a long time, 2 males and 2 females.

How big is your pond? Koi can be sexed but need a larger water volume then gold fish. I wonder if there are any specialist, at a university perhaps, that could help you sex some goldfish ?
Ad

Ooooops, I posted at the same time as you. At 2000 gallons , what about 2 male koi? In your zone your pond depth isn't likely to freeze. It might be more money then you want to spend, so a single goldfish might be nice

Dogcatlady said:
That fish sterilization process sounds horrific!
My pond is about 2000 gallons and about 2 1/2-3 feet deep. I can try one goldfish...it just would be nice to have a "few"...... Maybe I can get one goldfish, one minnow, one...???
Click to expand...

One goldfish or perhaps contact your local fish and wildlife service and see if they have any suggestions for native species. I would keep the fish side of it very simple since your goal is plants. Another consideration is keeping the fish alive over the winter. A hole will need to be kept open in the ice for gas exchange. Or you could catch the fish and overwinter it indoors.
B

I wonder if you could get fish of the same sex? Also, if you don't feed them, they will get food from the pond and that includes eggs!

Get a few fan tails, they don't seem to breed fast. I have yet to see babies with the ones I have.
D

Tula, I don't want koi because I think I'll get too emotionally involved! I'm a big animal person and I half expect these fish to get eaten. Last time I had a pond, the fish disappeared in a week. So I got a couple of minnows, hoping the camouflage would help them survive. I moved, so I'll never know.

Most other people seem to have few problems with predators, and certainly I need something to eat mosquito larvae, but I think koi would draw me in too much! LOL! I'm a nut case.

Bagsmom, I will have lots of plants and I fear the eggs and babies would be too well hidden.

This is a big concern for me!


Maybe I'll just get a couple of something camouflaged, and hope either I chose two of the same gender or that mother nature keeps things under control. I know there will be plenty of frogs (neighbor's pond's frogs were always coming through the yard in the past) so there will be hungry mouths to feed. Hoping I won't have hundreds of frogs too....does that ever get out of control??
Ad

Fantail goldfish are a good solution. The few we've had have never successfully reproduced. I don't know if they lay eggs and they just get eaten or if they never breed, but no babies from those cute little ones!

I understand about getting involved with koi. I wish I had a single sex pond, but am too attached to mine to re home 2 of them.

rainbow trout that are reared in farms are treated in early development so they cant reproduce
i think there called triploid ,or is that diploid memory not working,
it makes them and stops them reproducing so maybe theres a breeder of koi /goldfish that does this
it might be worth looking in to

Koigolds are supposedly steril. Koi goldfish hybrid, from what I gather, tend to get around halfway sized between goldfish and koi. Other than that, my sister has guppies in her pond zone 7. They survived two winters now, but hers is 3’ deep.

Yes they are pretty. I just found out I loss the ones I had in my 1000 gallon tank. The net has a nice hole in it, probably a heron stopped by while I was out of state. Darn bird took 2/3's of the fish 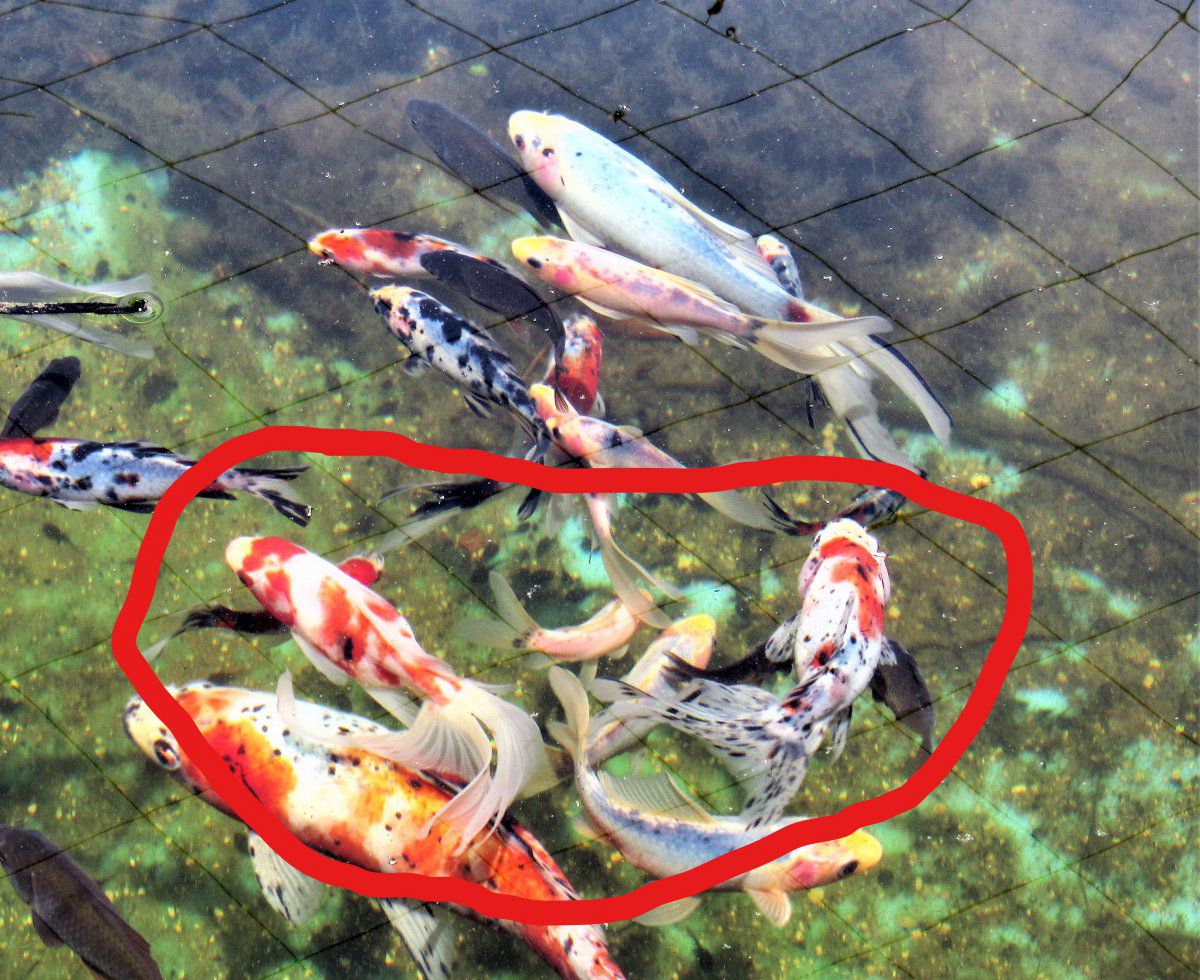 Someone had a nice snack, courtesy of your pond. I'd like to say "live and let live" but the fish really don't stand a chance, do they?

No they don't I was really wanting to see how the two with all the black were going to grow out to. They are also gone. I was bad about protecting them

Me to, I have managed to keep the heron at bay for years. This time they won.
You must log in or register to reply here.