I Think I have figured out what's wrong!?

Ok Folks, thank you for all your previous advise you have given about my Goldfish Tank(Girl). We were all thinking he/she was full of eggs? Or Bladder? Tumor?............. But I think I have figured it out.......... I'm not one hundred percent sure about this, and I don't know if there are any other cases of this happening and you know I don't have any experience with all this pond fish stuff, but I am pretty sure what we are dealing with here is....... My Goldfish that we thought had all these issues, is actually PART BLOWFISH!!!!! Mic Drop!!! That Damn fishes head is starting to disappear and getting as big a round as it is long for Gods sake!! I'm gonna get y'all a good picture of this thing, and I wish I could upload a video of it in action? There are no protruding scales, or exposed skin, it just has huge scales and keeps getting fatter and fatter!! IDK? Picture comi
Ad

Some here got to utube to post the video and then allow it public so they can then post in on here.

Sorry bout that, here you go.... I also wondered about that red n white one, it has had a growth on its nasal area? Any clue what that might be? It started last year or the year before, it would rub it against the side of the pond to try n get it off and succeeded. It used to be bigger and now it's just scar tissue I think. Anyway here are the pics of most of the others along with my "Blowgfish" also, is it normal for them to have such long fins and tails? JW

Completely normal for the long flowing tails. They are beautiful! As for the fat one, it could just be egg bound waiting to release her eggs or it could be constipated or have a tumor or other illness.
Here is an article on these problems I found online:
Why Would My Goldfish Be Bloated? 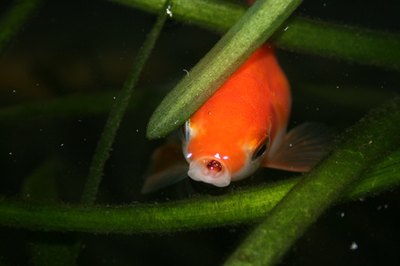 Female goldfish may bloat during the breeding season.


Goldfish are able to swim because they have sleek, symmetrical bodies. A bloated fish may have trouble swimming, and may be suffering from illness or infection. Seek qualified advice if you are concerned about the health of your goldfish.

Constipation can cause a fish to appear visibly bloated. In particular, fancy types of goldfish commonly have problems with constipation, due to the unusual shapes of their bodies. A constipated goldfish will become bloated, be unable to defecate and may have problems swimming normally. If your fish is constipated, you can help by feeding cooked peas with the skin removed. Fish that are prone to constipation should be fed peas on a regular basis.

If the water temperature is correct for breeding, and male fish are present, female goldfish will lay eggs as part of the breeding process. Before laying eggs, a female goldfish may become bloated as her body fills with ova. If you want to control the spawning of your goldfish, keep male and female fish separately. Female goldfish can be artificially induced to release their eggs if spontaneous spawning is not going to be allowed in your aquarium or pond.

Like humans, goldfish can become obese if the number of calories they take in regularly exceeds the number of calories they burn through exercise and basic metabolic function. It is unusual for goldfish to significantly overeat, so you should avoid overfeeding your fish as a safeguard against obesity. Feed your fish little and often, and follow the directions on your goldfish food packaging regarding appropriate feed quantities per fish.

Sadly, a bloated goldfish may be suffering from a serious physical illness, infection or even a tumor. If the internal organs of a goldfish are infected or malfunctioning, this can lead to bloating. A condition known as dropsy causes goldfish to become bloated -- additionally their scales will become raised and their body coloration may lessen. Dropsy occurs as a result of malnutrition or infection -- commercial medications are available to treat dropsy. Additionally, you can improve the chances of survival for your goldfish by changing one quarter of the aquarium water every other day.

I found this one also explaining what you can do if she is egg-bound: https://goldfish-emergency.com/gfe-knowledge-base/goldfish-koi-health/goldfish-impacted-with-eggs/

Short and long fin length in goldfish are co-dominant. This means that if a goldfish only has the alleles for long fins, they will have very long fins (around the same length as their body). If they receive only short fin alleles, they'll have only short fin (like a common goldfish). If they receive a mix, their fins can span any length between. It's more common for goldfish to have medium length fins, but comets are specifically bred for long fins.

So the long fins aren't a sign of disease or something. But it is very possible for them to be longer than is ideal for the fish. Like putting a kid in clothes that are way to big for them.
Ad

Thank you guy so much! I read all that and checked out that sit as well, all good info and will begin to try and implement some of the suggested treatments and see how it goes. I will keep ya posted, let's just hope I don't have to get a bucket of water and take her for a walk into the woods huh?? KIDDING!!! Thanks again!
Ad