So I do love my landscaping lights. Especially during holidays with all the smart controls and colors I do.

Even though I have a smaller pond, maybe 11k gallons, I built a small piece so the kids could get to the middle and feed the fish.

With that's I wanted to add some small lights to the side to give it a small glow. I'll probably put a few under to illuminate just that small part of the water. I have those lights picked out and take a G4 bulb I can fit with one of my smart bulbs.

I do not want to illuminate any more of the main pond area water for various reasons.

So my questions are...
Has anyone put lights on their big filter area to illuminate the plans that are there and even some of the gravel / water? I think it's a beautiful area and should be lightly lighted up. I was thinking of submersible lights shining up through the rock to hit some of the short and tall plants. Anyone do this and maybe have some pictures?

Second, has anyone put walkway lights around the pond parameter for visibility and even safety? I will have landscaping around the entire pond to cover the liner. It'll be a mix of rocks, plants and even a second of an old tree trunk. I'll have some mulch further out with flagstone as a walkway to get around it all. I was thinking of putting some short walkway lights to accent it all. But don't know how big of an impact on the fish it will have at night. I don't want to keep them bothered at night or help nighttime predators find them. Though I don't think the lights would be that close. Thoughts? Anyone have any pictures of theirs that set something similar up?

As always, thanks for the feedback!
Ad

By all means, add as many lights as you like.
It's your sanctuary, so enjoy!

Accent lights around the pond won't harm the fish.

The fish might not like it if you had a huge ballpark stadium fixture pointed directly at the water inches away, but a string of solar lights won't bother them.

Have lights around the majority of my pond and in it. Not going to bother the fish other than it attracts fish to it due to the bugs at the water surface.

As for night time predators, they don’t need light to find your fish, they hunt at night because they can see in the dark.

Solar are great for landscaping. I have yet to find a good underwater led 3 watt light.
Aquascapes 1 watt lights are a great little glow. Then there is the puck 1 watt they are twice as bright. Yes wame rating but twice as bright. And yes I have those as accent lights. And they provide a beautiful water dance on the trees .
The three watt is a bit bight for my taste but once the bio FIM grows on them it's perfect for illuminating across the pond up to 15 feet away or more.
A few pictures can be seen in my links bellow in the showcase and blog
J

I have three of these from Volt Lighting, a little pricey but they have burned 3 hours each night for 6 years, no problems. You can pick whatever wattage led bulb for them

Lights are worth the price tag is all I can say . It turns the pond into a magical space at night.
Place a light directly under the falls and it looks like thousands of diamonds falling.
Pull the light back 4 feet and you get the dance of the light from the waves.
A soft glow can add punch to a key part of the pond like a tree stump boulder or plant
Ad

Well I have a few submersible lights with an MR16 socket which will go with all my other lights in the back of the property that face the tree line. I get smart bulbs for them and will be able to dim and change colors as needed. I already have the low voltage wire ran to a junction box as well since I planned everything out ahead of time, just in case was going to add some lights.

I think I'll start with putting some in the pea gravel up slightly at an angle to showcase the bog surface (as the light exists) up to the taller plants I have. It'll shine back towards the tree line so no one can really see the 'bulb'. I'll then get two (one for each side) of the water fall sides pointing up towards the top of the waterfall. This setup I may have to think about a bit more to get in place.

Deck lighting idea idea I had, I have bought those as well. They are waterproof (but not submersible rated). Those will go along the framing of the small deck/pier I put in. I want to try getting something on top of that deck but still need to decide on how to put up a safety railing for the kids. If I do 4x4 supports with some rope strung through to create a railing, I could put the same type of lights on the posts to illuminate the deck top. We will see about that though.

If I can get this done anytime soon with everything else going on, I'll have to show some pictures. I'm in the process of getting the 2 last lines/zones for my irrigation system on the side of the house. I have 2-1/2 acres and trying to at LEAST get the side done so I can overseed again. I do not have much time left to get that seed down though!

Picture below is drawing of the deck/pier I already have in place. The yellow circles are where I'll be placing the small G4 socket landscaping lights. They are the 'Stair' style lights that shine down and have a cover so you will not see the actual bulb. Should look very nice. 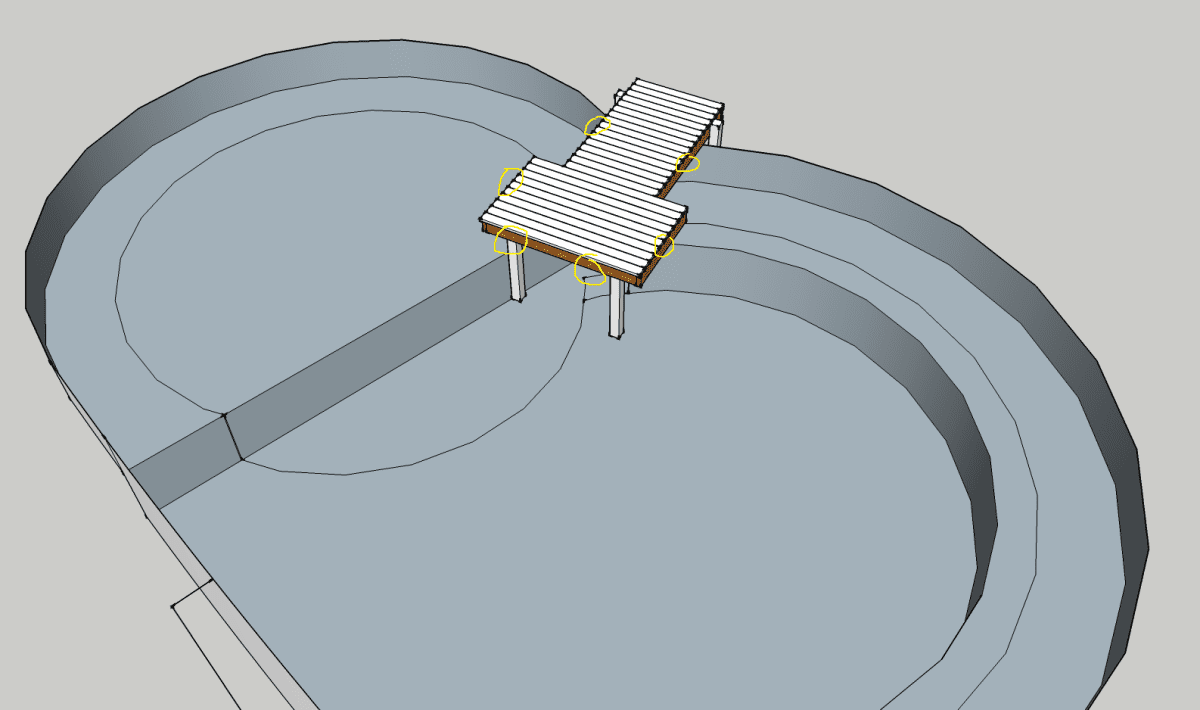