For the last few weeks, the boxies' behavior has changed. I won't go into details, but let's just say that I have decided [TurtleMommy-senses!] they are suddenly predator-wary! It's not uncommon for [especially] younger box turtles to avoid open spaces, choosing to travel along fence lines and under cover. But my babies have taken this to the extreme, acting in a panic, and quickly "running" for cover, not even going to their feeding stations. I've been having to almost hand-feed them [if I can find them].

Not sure, but I think it might be a Mississippi Kite that's spooking them as one has been frequenting the back yard trees. Now, whether the Kite has actually approached and threatened the turtles, I don't know. I looked them up and they're mainly insect-eaters [larger insects] and will go after small reptiles & amphibians [and yes, turtles]. We have had a lot of frog/toad activity, and there are anoles and skinks everywhere.

The turtle habitat is enclosed on all sides by either a decking plank fence or cinder block wall. The top, however, is not covered. The size is roughly 28' x 15' and 13' [see pic]. I am thinking about putting netting over it but not sure the best way to do go about it. I am constantly inside the habitat, so whatever I do has to be tall enough for me to stand up [I'm 5'1"] and move around freely. There is a 6' privacy fence that runs behind and along the length of the habitat that I could attach netting to -- at least that would be one supported edge. It doesn't have to be beautiful, but does need to be sturdy [and something I could do]. Any advice would be welcome! 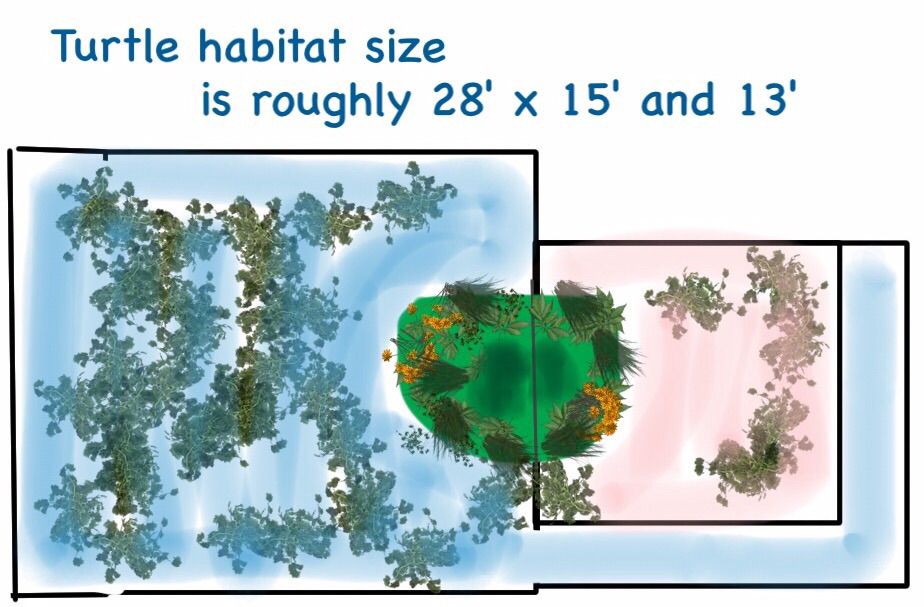 The privacy fence I mentioned runs along the off-set long side [where I have the dimensions listed]. It's a straight fence, not off-set like the habitat is.
Ad

Geeze M, this is a difficult one. Is it going to be permanent? Durable to strong wind?

Big Lou said:
Geeze M, this is a difficult one. Is it going to be permanent? Durable to strong wind?
Click to expand...

Yes to both, I guess.

Made from wood or plastic does that matter at all Maggie ?

@Big Lou That's not a bad idea.....and gives me something else to consider other than the stretching of a net over some PVC pipes.

@Dave 54 At this point, I'm open to suggestions.
Ad

I was thinking of those corrigated lawn edging rolls to contaiin everuthing , at the end of the cosmetic stage we are going to use three or four to pick out Val's Yucka patch so that it sits above all the gravel then can be back filled with eaother mulch or gravel of as different colour .
They last a long time are U/V friendly and dont cost th earth just £2.50 UK which is less than $3.00 per roll

Dave 54 said:
Run it inside the existing frame work and create hidy holes between the two so they can safely bolt between them

Oh, I see! No, that's not the problem. There is a lot of plant cover, and a gazillion "hides" throughout the habitat for them to go to hide. In fact, I'm working on another project that will even camouflage open areas. This would/should give the turts a better sense of security as well as fool the bird.

No, what I'm trying to do with this idea (this thread) is cover the entire habitat, to keep predator birds (in this case, the kite, and we do have hawks, but they tend to go more for the feeder birds) from getting to the turtles. But it needs to be something that I can walk under, inside of, whatever..... Maybe like netting the pond.....

Why not string a net above the entire area Maggie at least then you havethe aor cover should hawks not be in the area at that time anf feeder birds might be .
Then you can walk under the net which is strung over the habitat

Dave 54 said:
Why not string a net above the entire area Maggie at least then you havethe aor cover should hawks not be in the area at that time anf feeder birds might be .
Then you can walk under the net which is strung over the habitat

Dave, this is what my general idea was. The problem will be implementing it.

Or, what about stringing fishing line instead of netting? I know they do something like this at zoos & aquariums to keep the birds out [though it's use is questionabe with GBH's]. I don't know how kites would react. I know they have excellent eyesight so surely would be able to see the fishing line. I could add a few CD's which would reflect sunlight for a little extra light show.....

Here's a picture of the turtle habitat a couple of years ago. I hadn't re-done the pond yet, nor had I started work on the turtle-bog -- you can see [foregroud] where the old turtle section was along with the tubing and valves for it. The 2 trees [red x's] are gone now, as well. Yellow line is the top of a fence line that could act at a support of one side of anything I do, be it netting or fishing line. 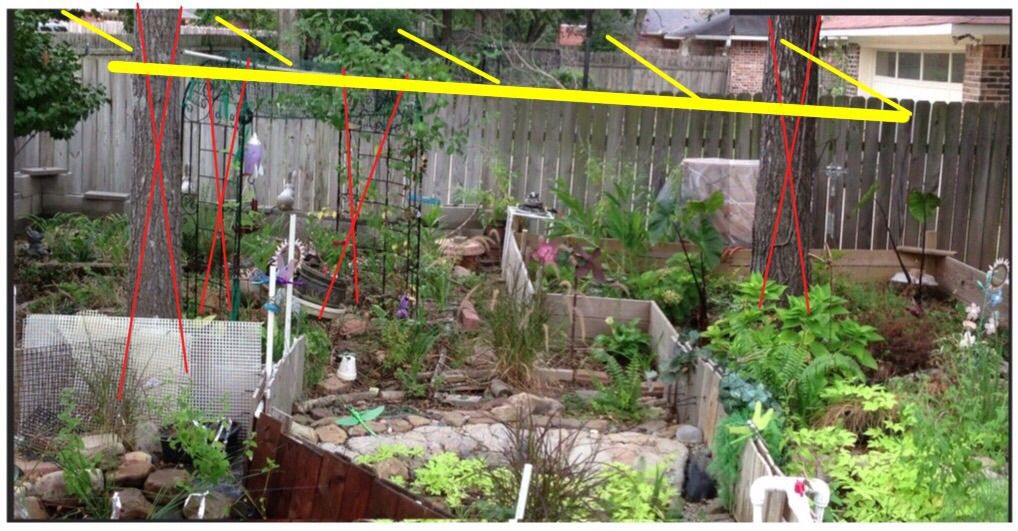 I think your plan is a sound one Maggie and the CD's really great idea as the birds can now see those lines and not hurt themselves which was my main worry
Attach a rope between the two trees and then run lines from the fence to the rope between the trees and attatch them about 18" apart along the length of the rope the legnth then Attach CD's or mettalic strips on the lines
Then wait and see what happens if it works good if it doesnt ...well its not the end of the day try a wooden pole instead
All in al the idea is sound Maggie you just have to make it work
Dave
Ad

Dave, the trees aren't there any more -- had them removed last fall.