New lappy seems to be in order

Any suggestions, I have not looked in a while.

My nice dell xps 13 has been giving me issues with the touch pad, it is crooked a bit non responsive. In doing research it is due to the battery swelling ie. thinking of exploding. The indicator is the fact the lappy lid does not close all the way, and guess what! mine does not close all the way.
In reading about the repairs it appears a new battery does the same thing after about a year. Mine is 4 years old. This issue has been going on for about 6 months, just now checking into how to fix. I thought it was just a bad touch pad. Good thing it did not explode!

So now doing the what do I buy next? I do need a keyboard, my hands do not like tablets. Hubby has a nice tablet I just can't use it, too painful.

Any good computer smarties out there with a suggestion? Costco always has one or the other on sale...............

I like speed efficiency, hubby has given up telling me to buy cheap.
Ad

I loved my mac way back when my first hubby bought me one of the first ones made, in the 80's. Cost $4000 he worked for motorola and got a "discount"
But over the years, running the work computers, microsoft, needing to dial in etc I got converted to Microsoft.
Phones android, tablets android.

but all my back up files are on hd's that are microsoft. So maybe not.

Bummer and sorry this is happening. I have a Dell laptop I use sometimes and hope it does not do the same as yours. Don't forget if you bought it at Costco you get a 2 year warranty and then if you use the Costco Visa card you get an extra 2 years so maybe your expiration date has not arrived yet? Check the date on when you bought it.

Then spend my time looking for a replacement one. I like this dell, light weight works well, when it is not breaking lol

I just checked, back when I bought it the additional warranty was through square trade not if you use your visa card though costco.
Ad

Well darn maybe you can get that one online and fix it yourself. Wonder tho if the computer will stay warped tho? Might be permanent damage to the case but then maybe not.

Per what I read once fixed the case and touch pad are fine. If not I am only wasting 54 bucks to see if it fixes it. The lappy works well, no real need to replace except for this issue. Just need to remove a bunch of screws. Tiny screws but screws. I do have tiny screw drivers.
If I replace the battery and it fails, swells whatever then on to a new one.

Hoping it works w/new battery! Wonder what causes the batteries to swell? Whatever it is they need to fix it cuz if it blows up they will get sued.

Found this on the net:
Dell laptop explodes, burns woman
Fire experts say the most likely reason a woman has singed hair and burns is that the laptop's battery malfunctioned.

Loretta Luff. CBS Philadelphia screenshot by Chris Matyszczyk/CNET
One tends to hear more of phones exploding than laptops.
It seems, though, that the latter can blow up too, as one Pennsylvania woman discovered to her misfortune.
72-year-old Loretta Luff says that she was checking email and playing spider solitaire when her Dell Inspiron laptop simply exploded. The battery pack flew across the room.
"The next thing I knew, my shirt was on fire, I grabbed that and took that off and I think that's when I singed my hair," she told CBS Philadelphia.
Luff ended up with burns to her foot, arm and face. "My foot is the worst," she told ABC Philadelphia. "And I think when I came down on a piece of the hot battery part, I came down and stepped on that."
Her carpet, desk and even her dog's bed were damaged. She told Philly.com that doctors had to remove "stuff" from her nostrils.
Preliminary examination by firefighters suggests -- as is often the case with cell phone fires -- that the battery might have been the culprit.
Dell, in a statement alluded to the idea that the battery may not have been an approved one.
It read, in part: "Dell will take appropriate steps to investigate this incident. It's also important to note that, in our product documentation, Dell tells customers that "using an incompatible battery or a third-party battery may increase the risk of fire or explosion and that they should replace the battery only with a battery purchased from Dell that is designed to work with their Dell computer."

And this one talks about bulging batteries: https://www.dell.com/community/Latitude/Bulging-Batteries/td-p/6058045

Thanks JW I am fixing. Per the one I am buying it is a approved battery. I am leaving the lappy off and unplugged if not in use.

Going to keep a look out for any real good prices as christmas comes and the new ones come out next year. They tend to dump the one year old ones a lot cheaper.

My Macbook had similar issues but not as bad. The Battery would no longer hold a charge. I took the machine into a Mac store and they replaced the battery and mouse pad at no charge for a 4 year old computer with no extended warranty. Apple stands behind there product, if there is multiple issues and it is found to be a part defect Apple fixes it no charge. I will only buy Macbooks now. Little more to purchase but cheaper in the long run.
Ad

I'm an Apple fan, too. Just got a new MacBook Pro a month or so ago and love it.

Hopefully it's a cheap, easy fix! Don't wanna see you set yourself on fire!

I used to love apple, I would entertain moving back to apple but all of my hardware is windows driven. If I changed over I am not sure what all would need to be bought new.

Work made me change, I helped fix and run our department network long time ago before it was hospital wide. I had to swap to windows to be able to dial in and fix issues. Then it as dialing in to do payroll.

Lisak1 said:
Hopefully it's a cheap, easy fix! Don't wanna see you set yourself on fire!
Click to expand...

54 dollars so far think I can handle that!

I work on a Windows desktop machine at work - thankfully I leave it there! We also got to choose a laptop for portability - Mac or Windows - and there's always a stack of Windows machines in the tech office. Those of us with Macs experience very few issues with either hardware or software. With so much of what we do going cloud based, the OS really doesn't matter as much.

How true and I was reading you can run windows on a mac. I might just convert. But phones will still stay android love my note9

But first fix this one see how long it lasts before I bite the bullet.

Good luck! We need you on a working computer @addy1 !
Ad

The battery should be here today. I tried to use a tablet, but these hands just don't do the movements well. Need my keyboard and touch screen. If I get this one running again well, I can always buy a new one and use this one when I need my word programs etc. I still use my 8 year old lenovo, it has some programs on it that work which I need off and on. Refuse to pay for them again.


Lisak1 said:
Good luck! We need you on a working computer @addy1 !
Click to expand...

Wow 20 minutes, one new battery, 54 bucks, a whole bunch of tiny screws, a bit of cleaning and I have a new lappy! The touch pad works now, it was a sruggle to do a left or right click, been that way for a few months, but I am slow to dump things. Finally got to where it was really not working without finding the sweet spot so I started researching what the heck. Which led me to the swollen battery issue.

It is even working faster and cleaner, like brand new, I had noticed a heat issue recently. Bet it was causing issues with performance.

Yeah saved a bunch of bucks not needing to buy new! 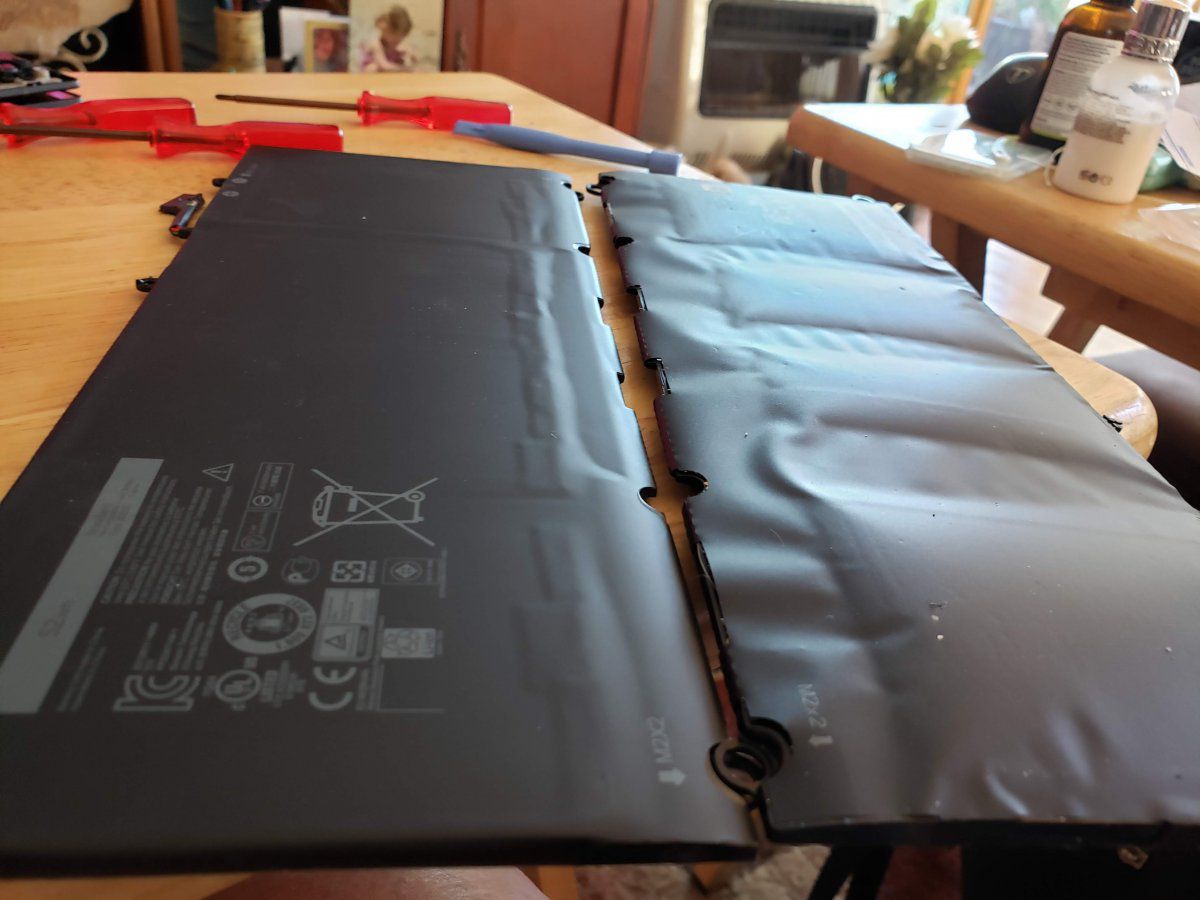 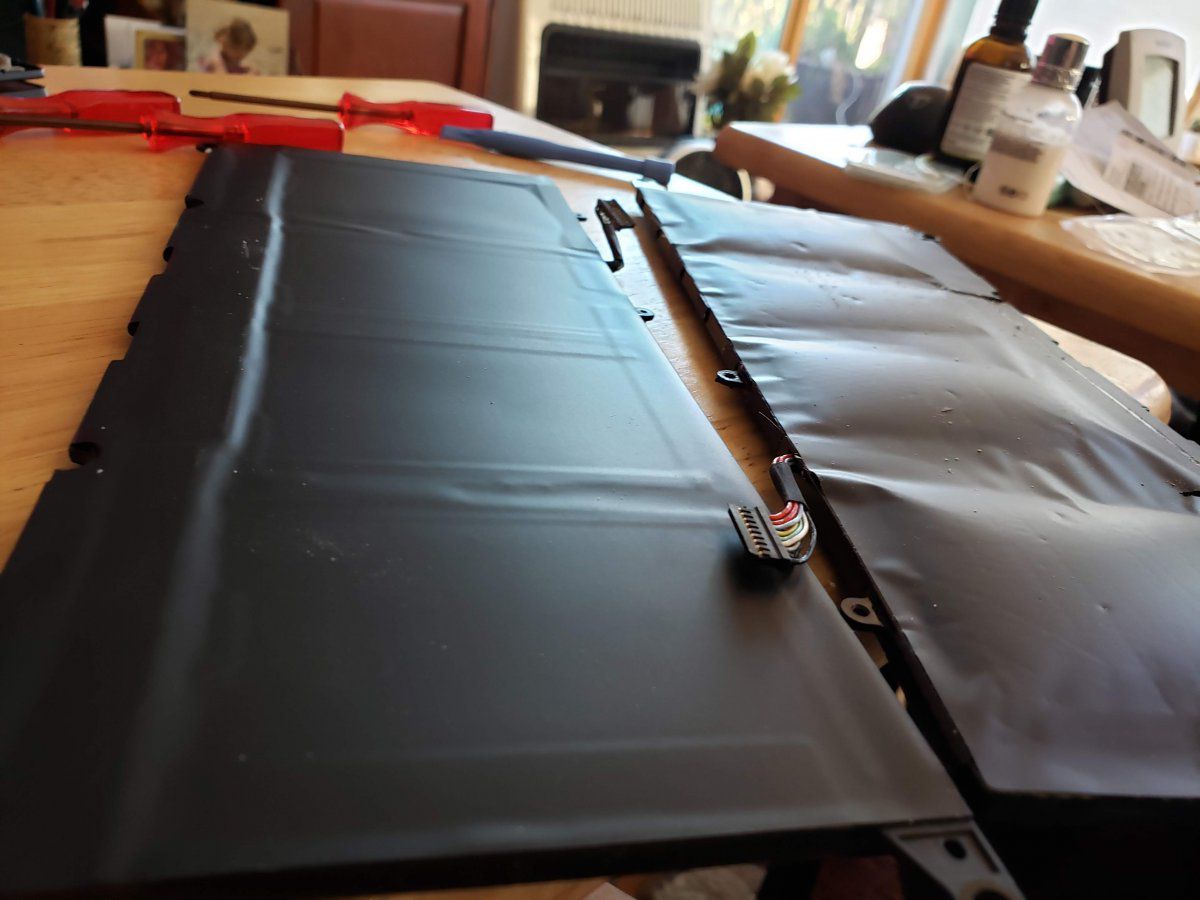 Wow, you can really see that the old battery was swollen ! Good job on saving $ and getting it to work !
Ad

I am impressed at how much the bad battery was affecting the performance of the lappy. It is really responsive now and flying through pages like a new never used lappy.

The fattest end was pushing up the touch pad, making it very non responsive.
You must log in or register to reply here.