Haven’t leveled or finished, but looking deep enough with a 5-6” ceiling from pump to rock cover. Going to lower the intake lip a bit more. Trying to imagine the space condensing more with the liner in place and trying to fold it, thus may need to expand outward still a bit.

Trying to coax the along my supports. Essentially they will form a lip that the rock will lay across. Two vertical blocks can support me standing on them(225), but the height is too low with only one set of blocks.

Option 1: randomly tried this cross setup. Would need to be tinkered w still as there’s no front support with this random toss. Will need to open the space more also as it’s too cramped once you consider the liner laid over top and some space on the sides of crate.

Option 2: halving the patio blocks would give me the needed height but two skinny blocks directly over top aren’t too stable. Testing on the side walls, more or less eaten by the clay soil, keeps them a bit more sturdy but I’m still untrusting. The problem is essentially just the “two piece” problem. I’m considering concrete welding the ends together then sissy sock sewing them up. It’s not super sturdy, BUT it would wrapped up and stuck in clay, I have a strong sense it would serve its purpose as a steady base during the construction. Once everything is done/lined, it’s all stuck in the clay and won’t breakdown.

Option 3: getting some plastic shelving of the same rough dimensions of the patio blocks and cutting them to the exact size I need.

Going to the store tomorrow to look at the shelves and if any would actually work by sizing (kinda eeeeeh if there will be any) and to the landscape place to check out stone sizes/prices. 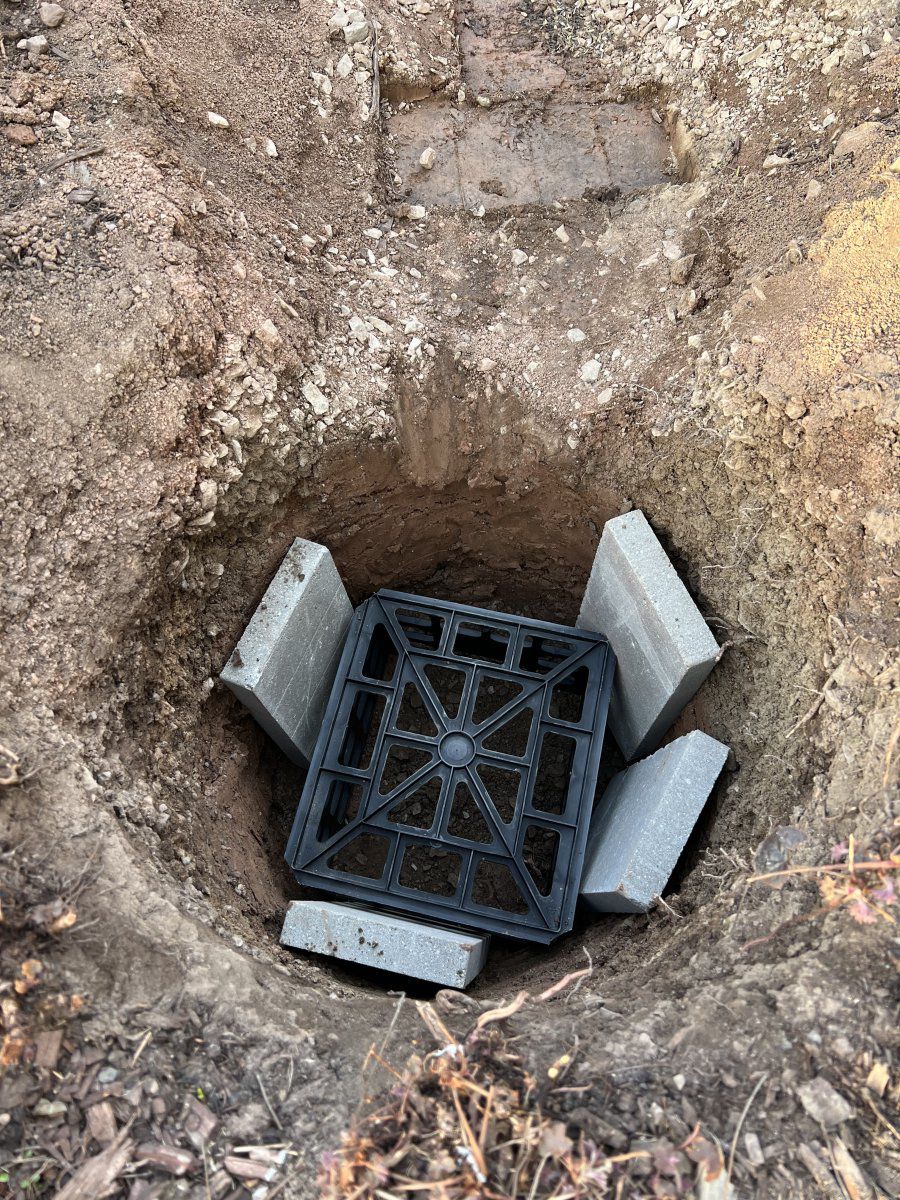 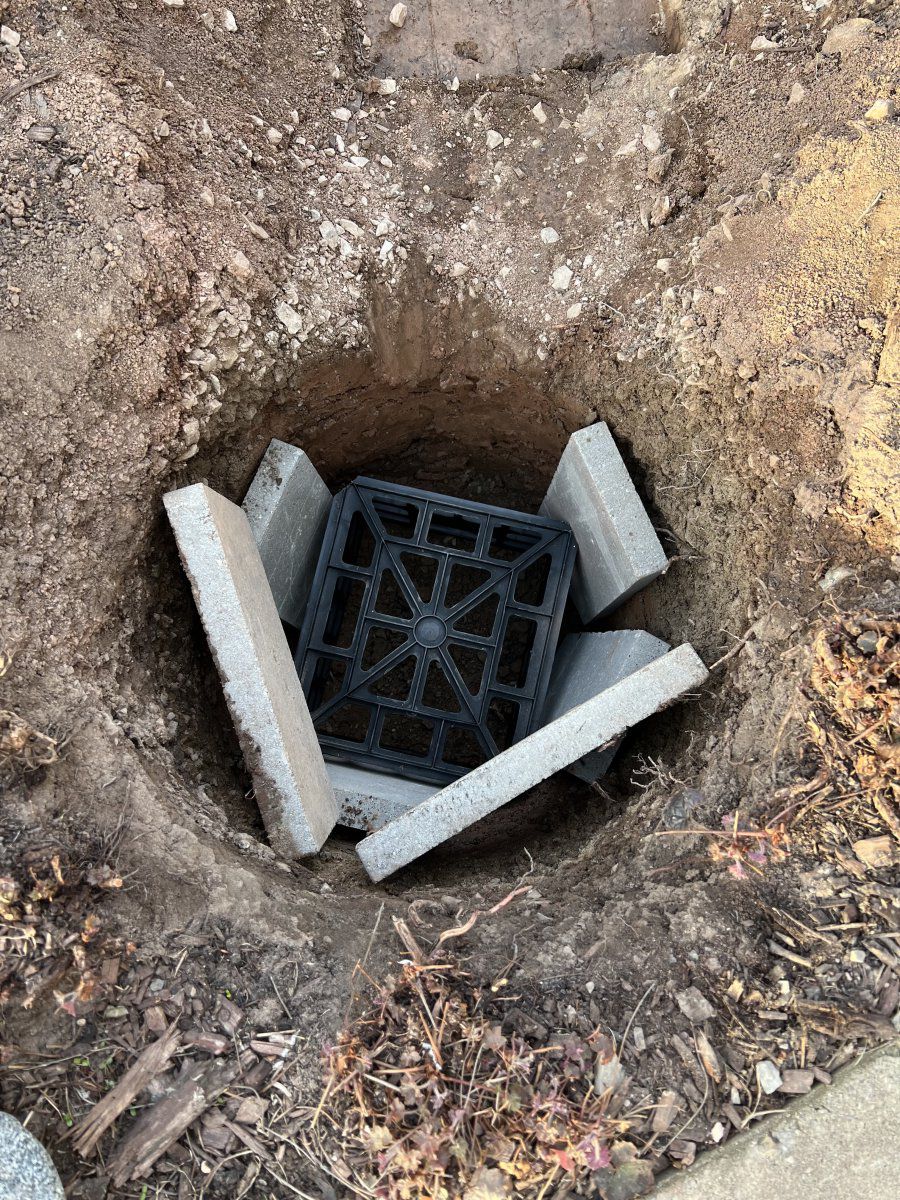 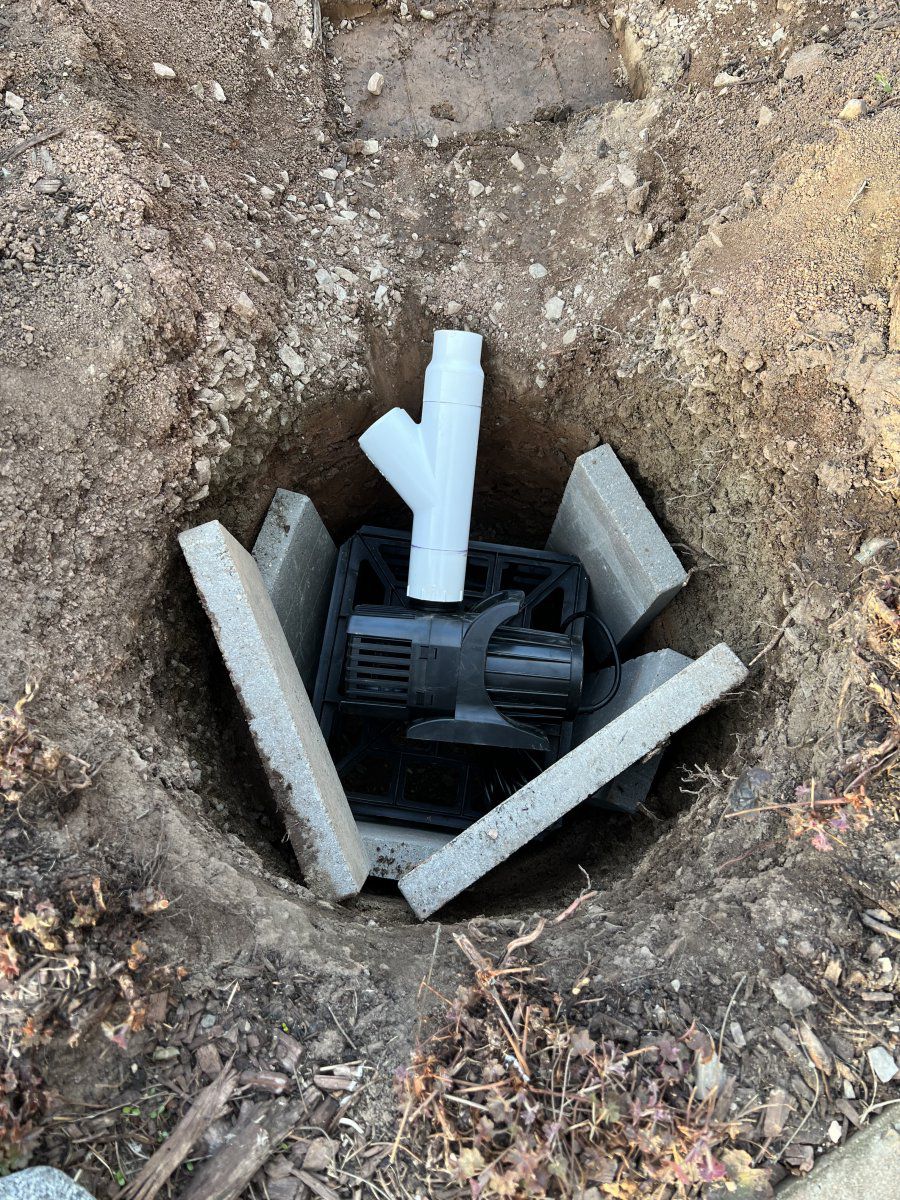 Your going about this with the wrong thought. Get rid of the concrete all together it has sharp edges that can cut a liner . there is a fabric you can buy it's a non woven 8oz polypropylene line the hole with the fabric place your liner in the hole. install a second layer of fabric . put your milk crate in the hole place 4 inch rocks between the fabric and the milk crate or what ever size won't fall into the milt crate and stuff around the sides with the rocks your sides will not collapse as the rocks and water will be pushing back against the side excavation
D

You’re saying all this over the top of the blocks? There will be an underlayment and I’m using RPE. Seems overkill.

Haven’t had time to play w blocks too much more but getting anxious.
Hit a bit of a mental block and fielding thoughts to consider how I’m stacking rocks.
Have the split water flow (non-negotiable) from the bog. Nothing about the current setup/stability of the concrete blocks or stones is permanent - just so I can play/visualize. The flattish rock on the left I thought as the middle rock water cascades over - didn’t try to fit/size any framing rocks yet, they could be too visually large for the size (max of like 12” I have which is too large probably)

My issue:
Mixing flagstone and regular rocks for tier drops.

Original plans: Water from falls box onto the flagstone, then to the right and down. Lip on the left is bog overflow water with less “umph” flow.

Was Thinking about rocks, looking at other pics/vids, not a lot of flag/rock mixes for level changes. Seems most committed to just flagstone drops, or use the center flat rock, with two framing rocks.

Thoughts: I like both, but size/space considerations. Flagstone (in my head) would be way easier to pool/drop the water given some of the space than trying to find two appropriately sized frame rocks on sides with the middle stone. This looks great I think when the project is spread over a longer distance for a stream like effect….just not thinking I have the space to make it look well enough.
Mixing flag to framing rocks on the same stream path is visually meh (in my brain). (One tier flag, another framing, back to flag, etc)

I “feel” like I’m committing largely to flag stone drops and probably easier to figure out within the small space….
But….. Agh. 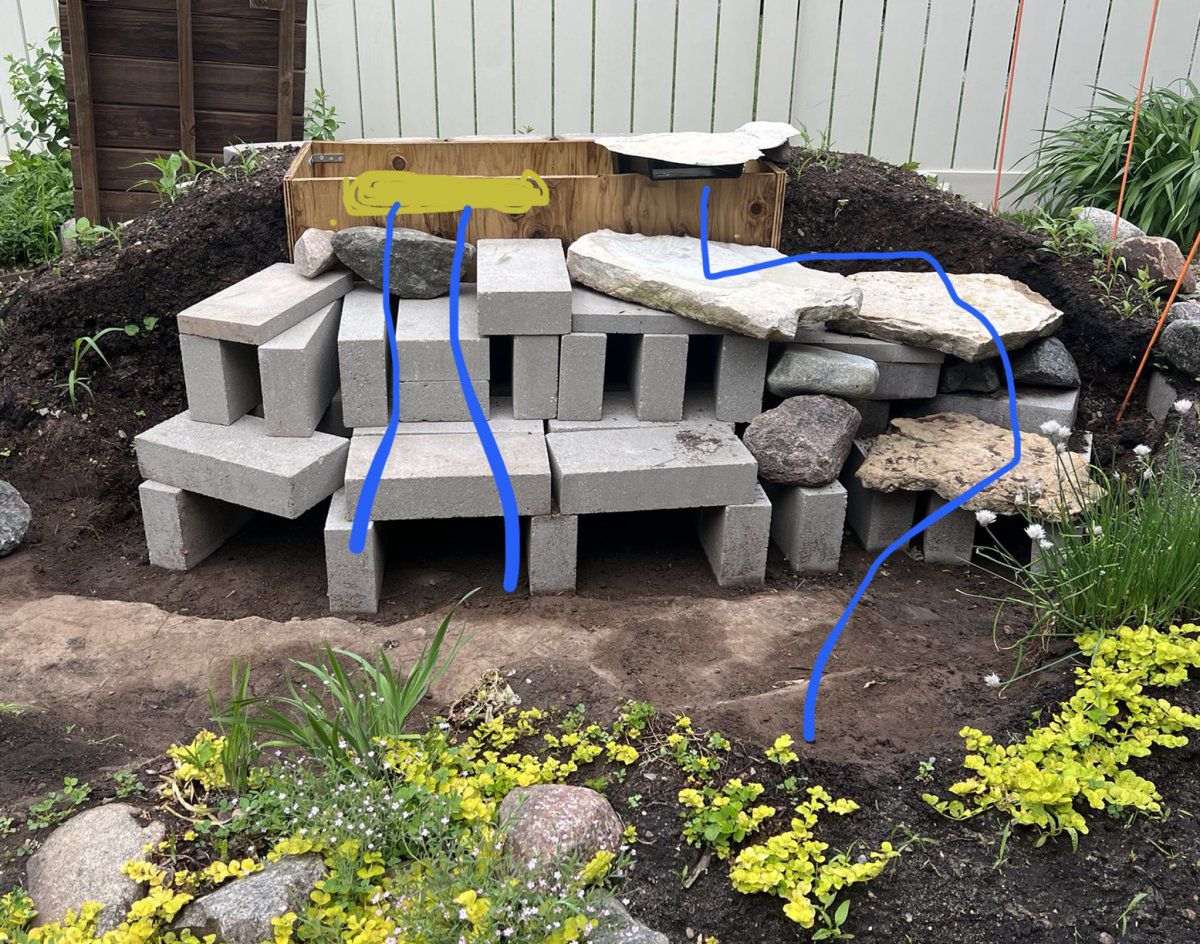 Here is an example of mixing flat and round rocks that my brother-in-law created. 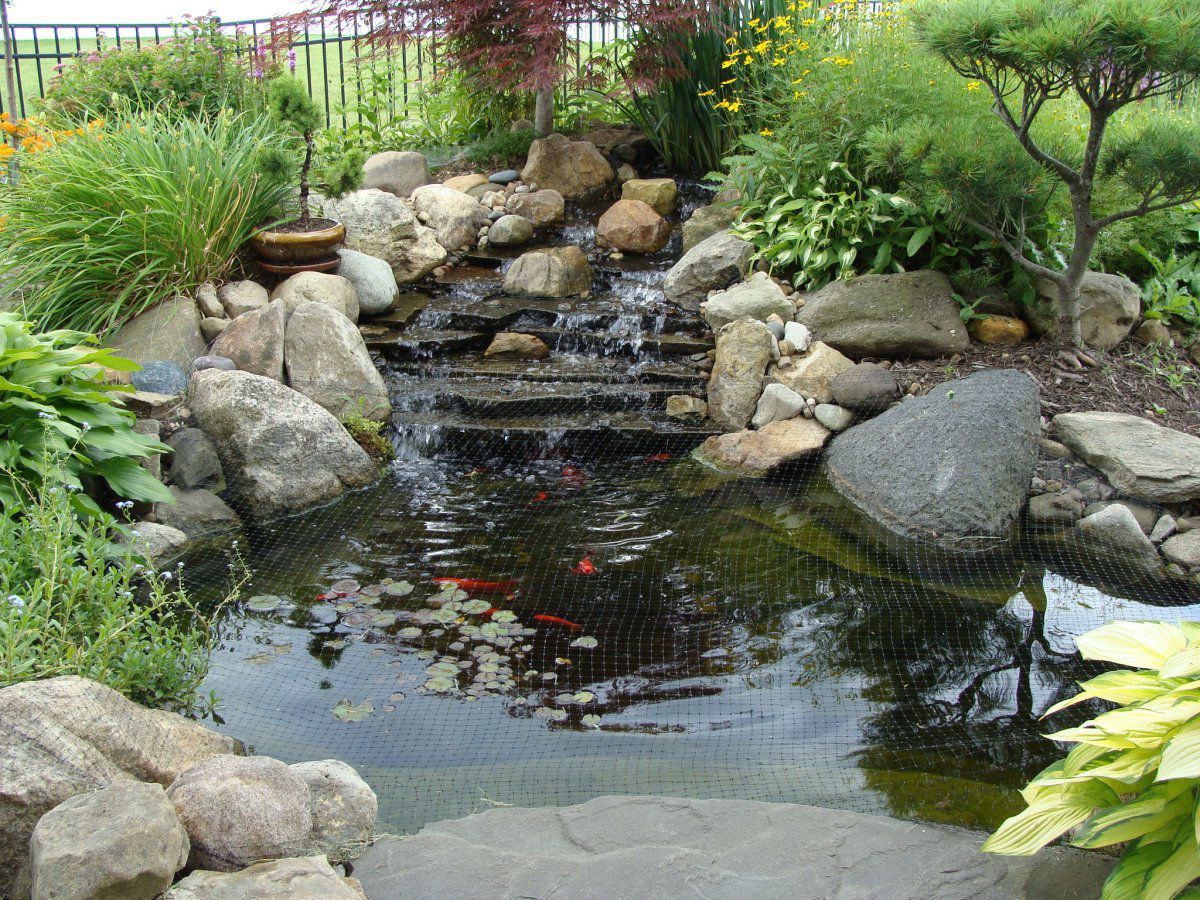 Got $150+ worth of flagstone from the father in law mainly for the ground path but had a sizable one which I laid on the bottom left.

Most of the rocks are mainly rounded which sit/view weird w the angular nature of the blocks. Have some range of sizes with the roundies.

The compact space is making it harder on my visual mind related to rock size and stacking.
How am I going to cover the liner under the flag stone drops? Just jam and stack in rocks under like the pic?
The flag is all the way back against the drop - do I just stack the rocks on top of the flag in the back or move the flag forward? Problem w the latter is the size of the rocks, blocks, and overhang weight leading to a delicate balance.

The top left bog area (no overflow slit cut yet, but imagine a 2-3” lip) has two of my larger rocks just next to each other, to fill the space. Just looks ugly (right now). Trying to think of how rocks stack around the bowls (flag) on the left.
Do I just need more rocks w flat sides?


Not willing to just toss on the liner yet until I get this figured out a bit more, else I’ll end up in the 2 year battle of some new project and the liner being outside and uncovered. 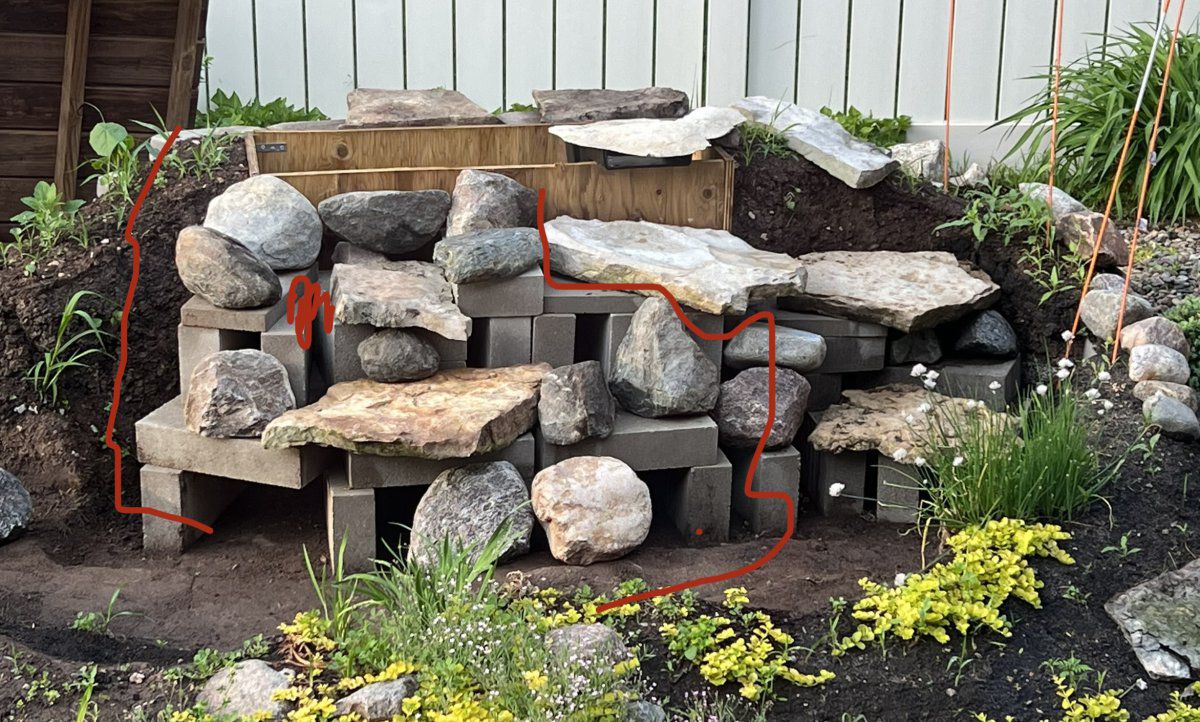 I was just about to say "you'll never get a pleasing look by mixing flag with round rocks" and then @cas hits us with that photo - WOW! That's beautiful!

So when you analyze that waterfall and break down what's happening, you see that he used the flagstone as it might appear in nature - not just here and there interspersed with round rocks, but layers and fanned out to create more of a flow than a cascade. It's just the most perfect use of flagstone in a waterfall that I've ever seen.

Why are you using the cement blocks in your waterfall? Or did I miss something about your illustration? I can be a little dense when it comes to visualizing things!
D

Blocks to create stable shelves/tiers for water level changes. I have PTSD from taking on the pond and the old just being a sloped side and rocks piled up. Rocks just piled up would would have drove me mad. Also no room/ability to really get/haul sizable boulders to make it work.

Felt underlayment and liner to over the blocks of course. Rocks on top. Etc.
D

Had 5-6 minutes last night finally and got to throw some rocks around.
Sorted my rocks into a single layer and pulled various flat side ones.

Today full of questions as I finally have some hours set aside to pond it up before the chaos of next two weeks again.

I “tested” a bunch of flat rocks on the second drop to see how they fit or look. Also to post pictures as they range from maybe to eeeeeeeeeh. Give your thoughts on my complete newbie stacking experience (again nothing from concrete to certain a blocks permanent). Bigger here. Small there etc. (No giant boulder carrying machines so limited to mainly liftables or dolly) 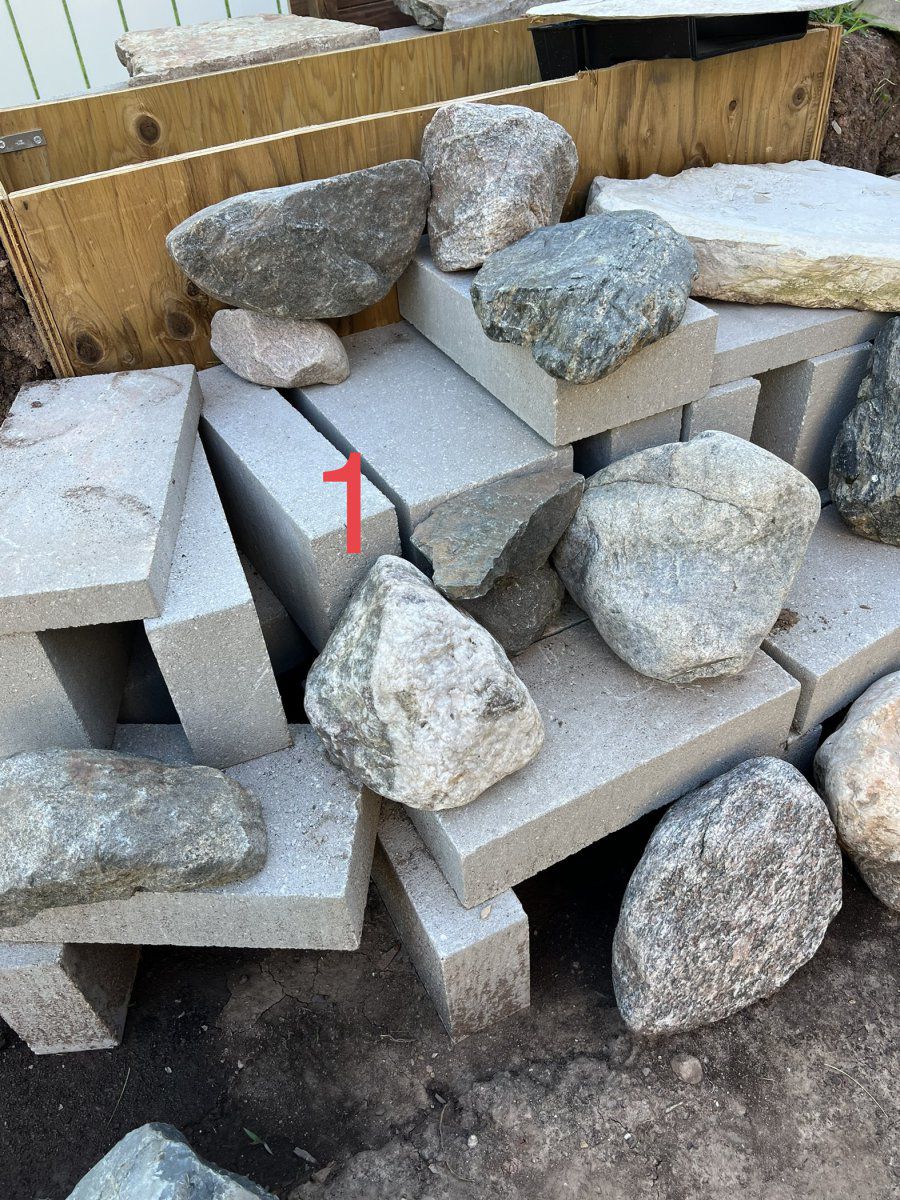 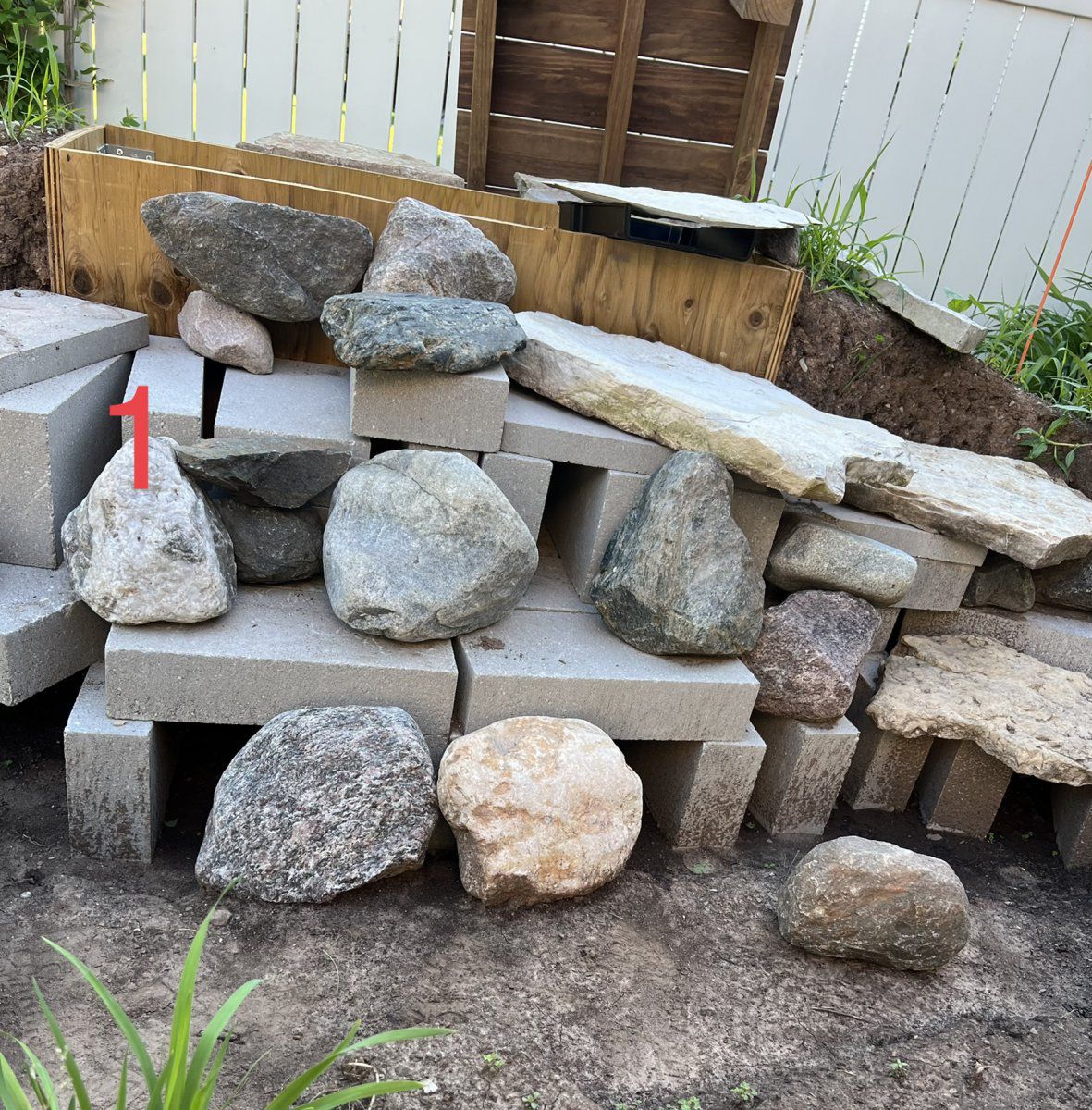 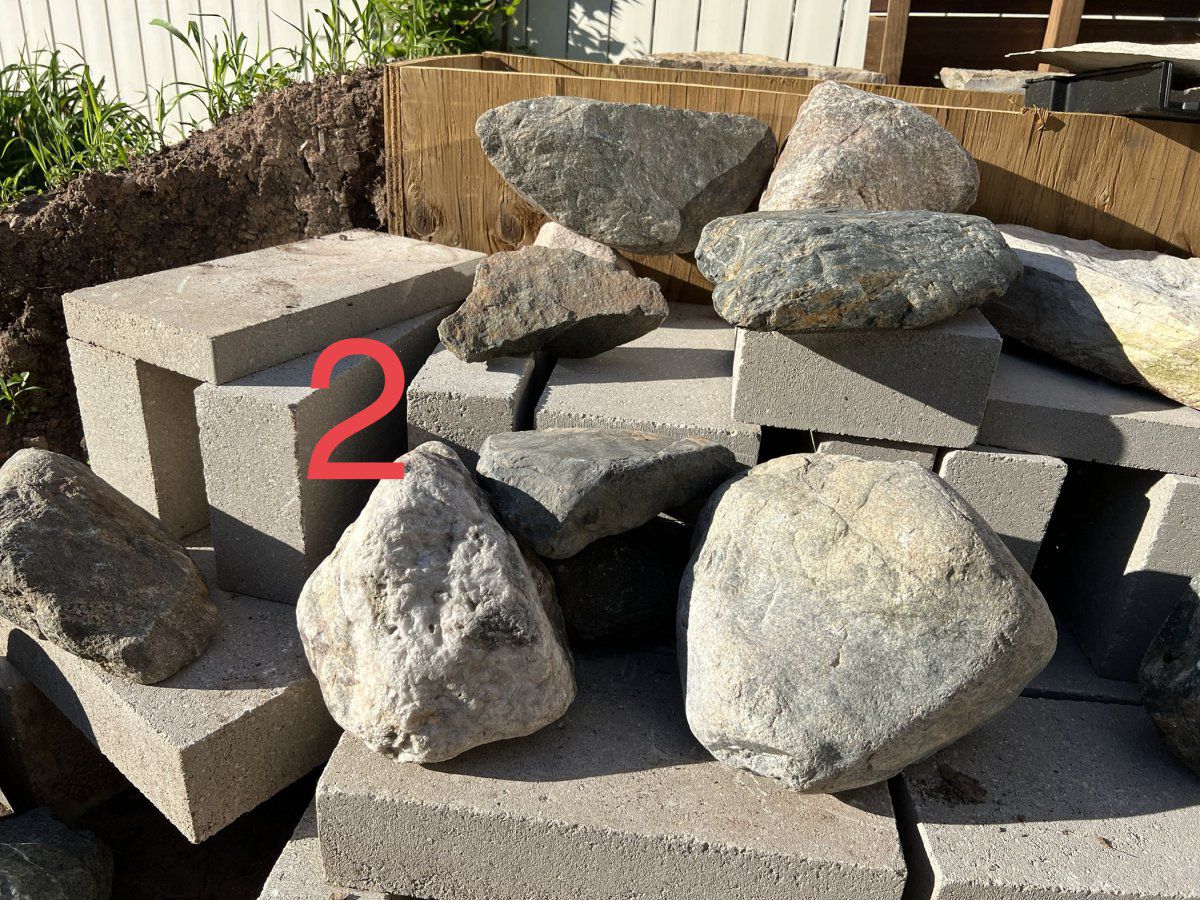 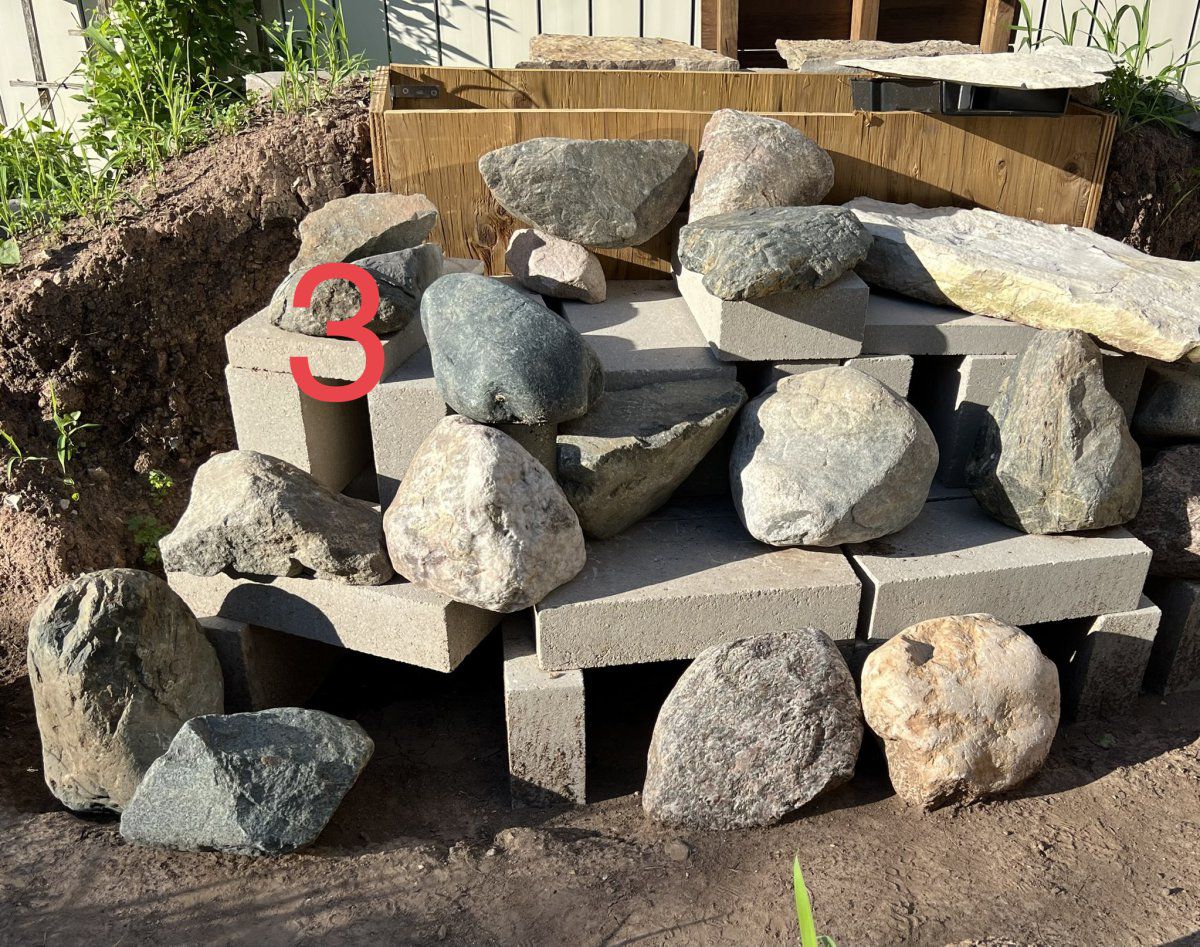 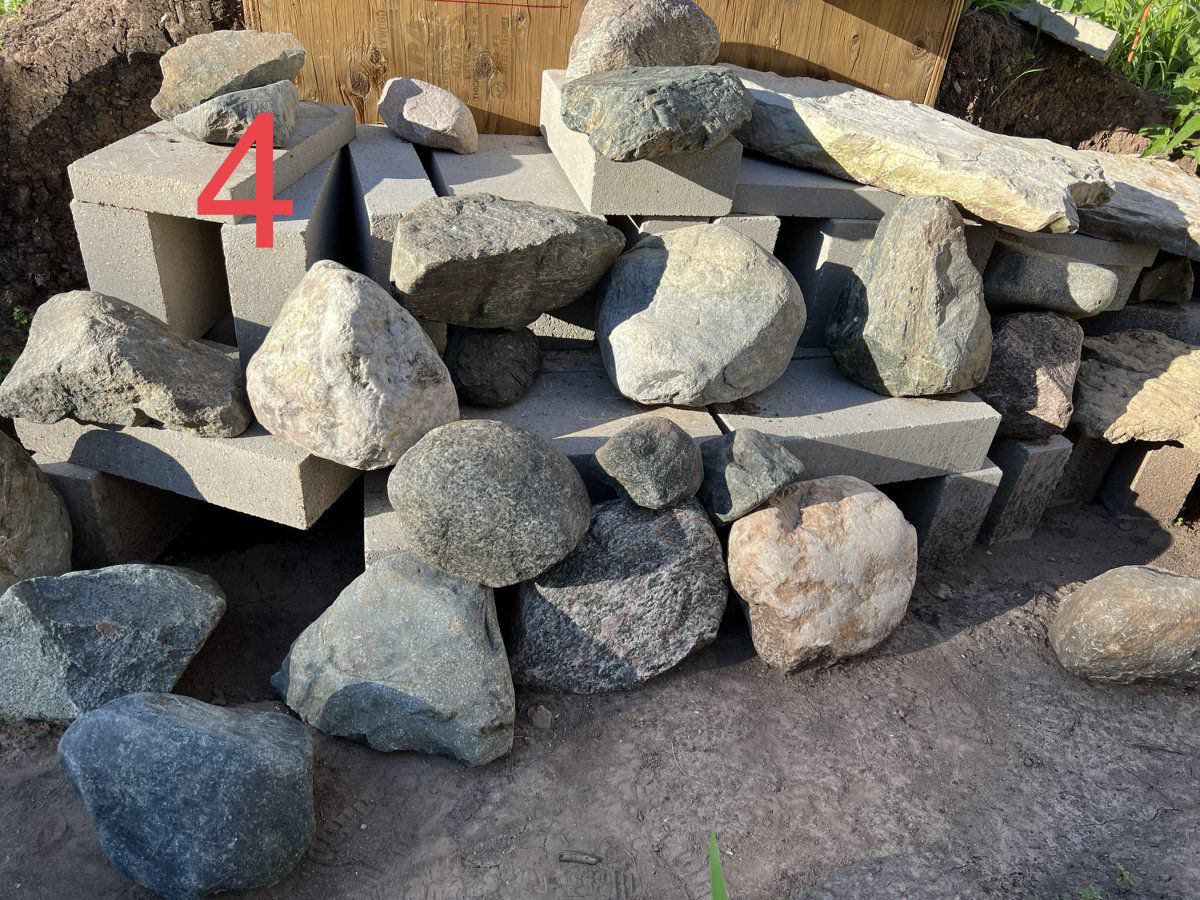 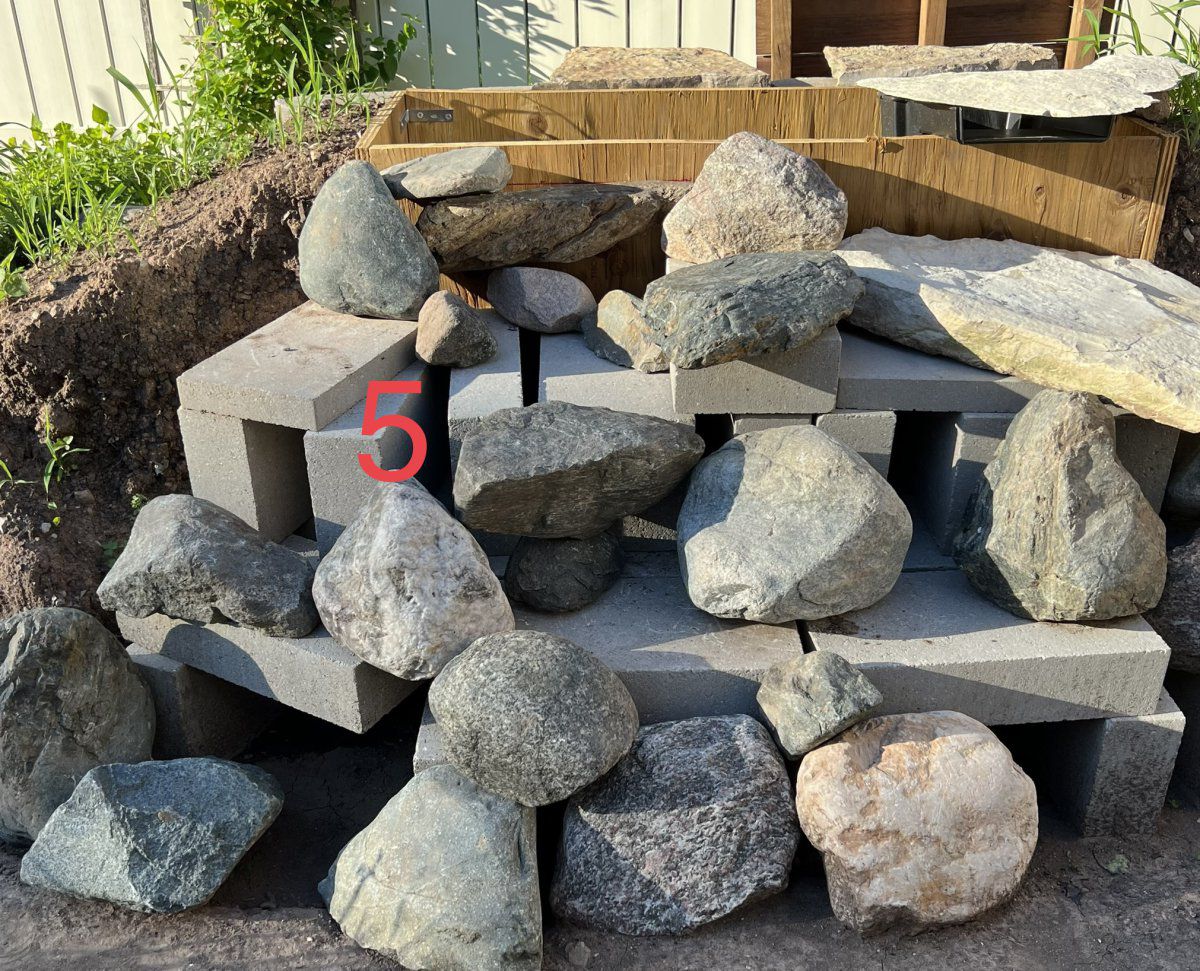 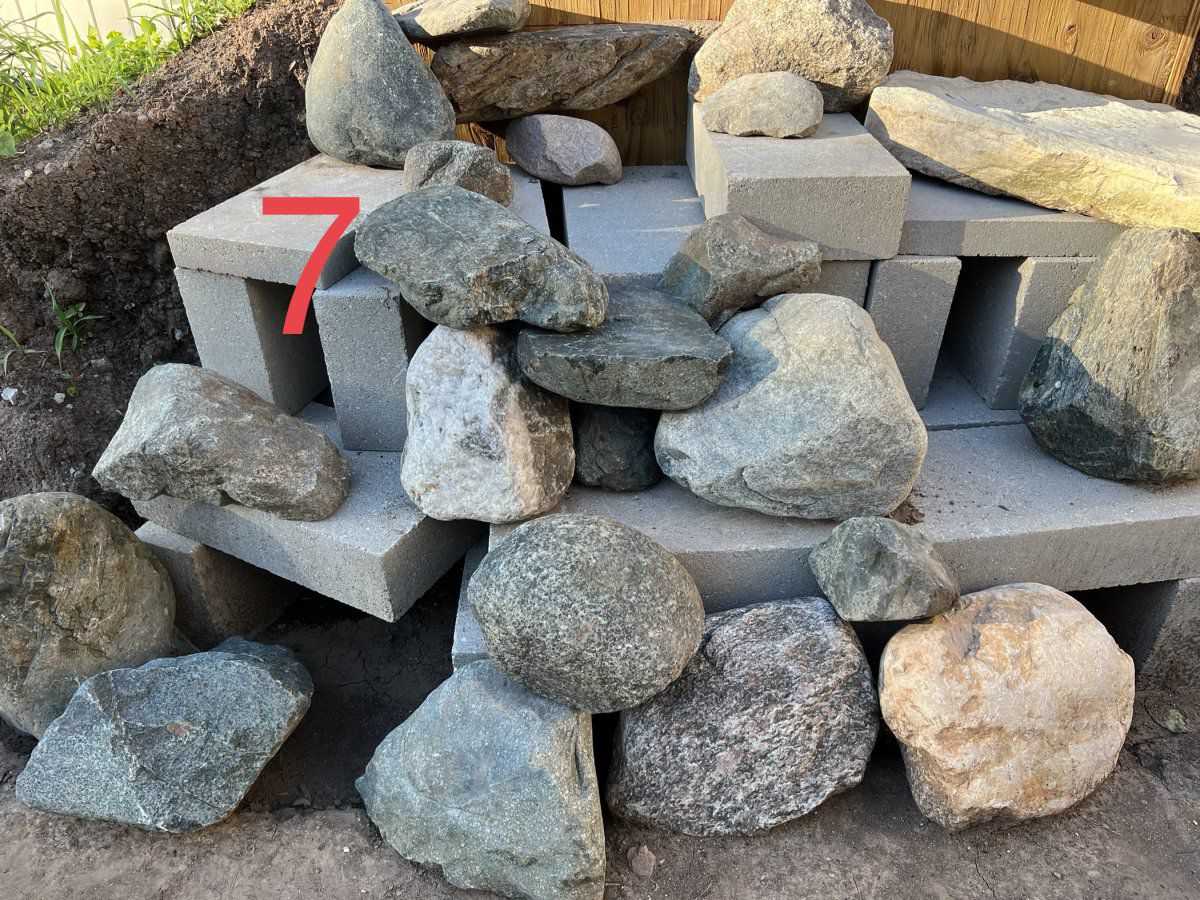 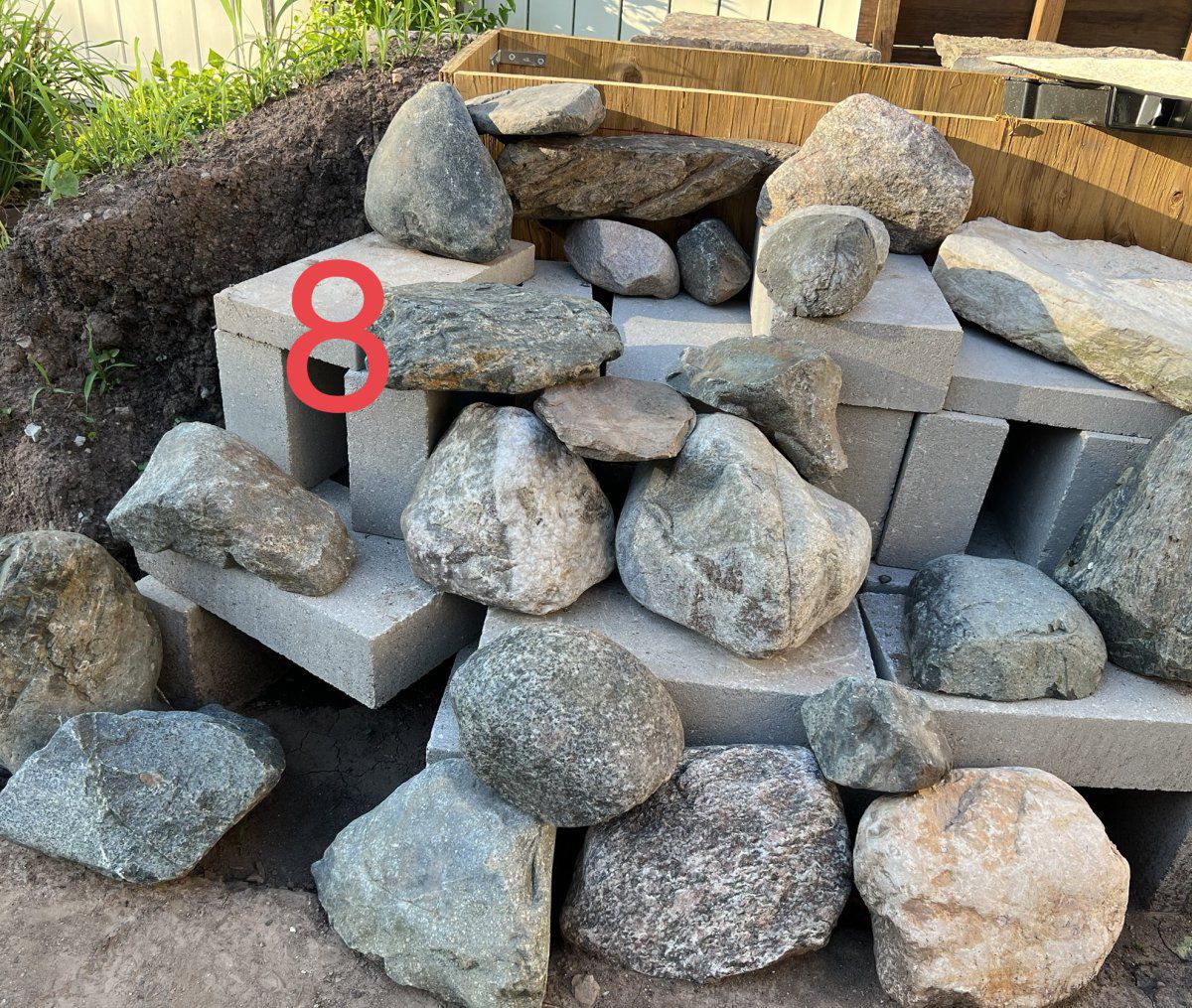 There’s not much lateral space so I’m not sure the larger flat ones look the best given the water falls on the end of the tier then down the the river. A small flat rock gives some room but nothing major to pool/fall again.
(Don’t worry on exact height, just kind of put the flat in line w the flat block behind it).

Feeling the first drop from the bog will contain some water but not enough lateral space otherwise with rounded rocks vs flagstone.
I had another longer, skinny, flat topped rock I thought could use as the lip for the bog box overflow. (Hard to see in the pics with shadows). Hoping w it being thinner it gives more top area to “pool” before falling. 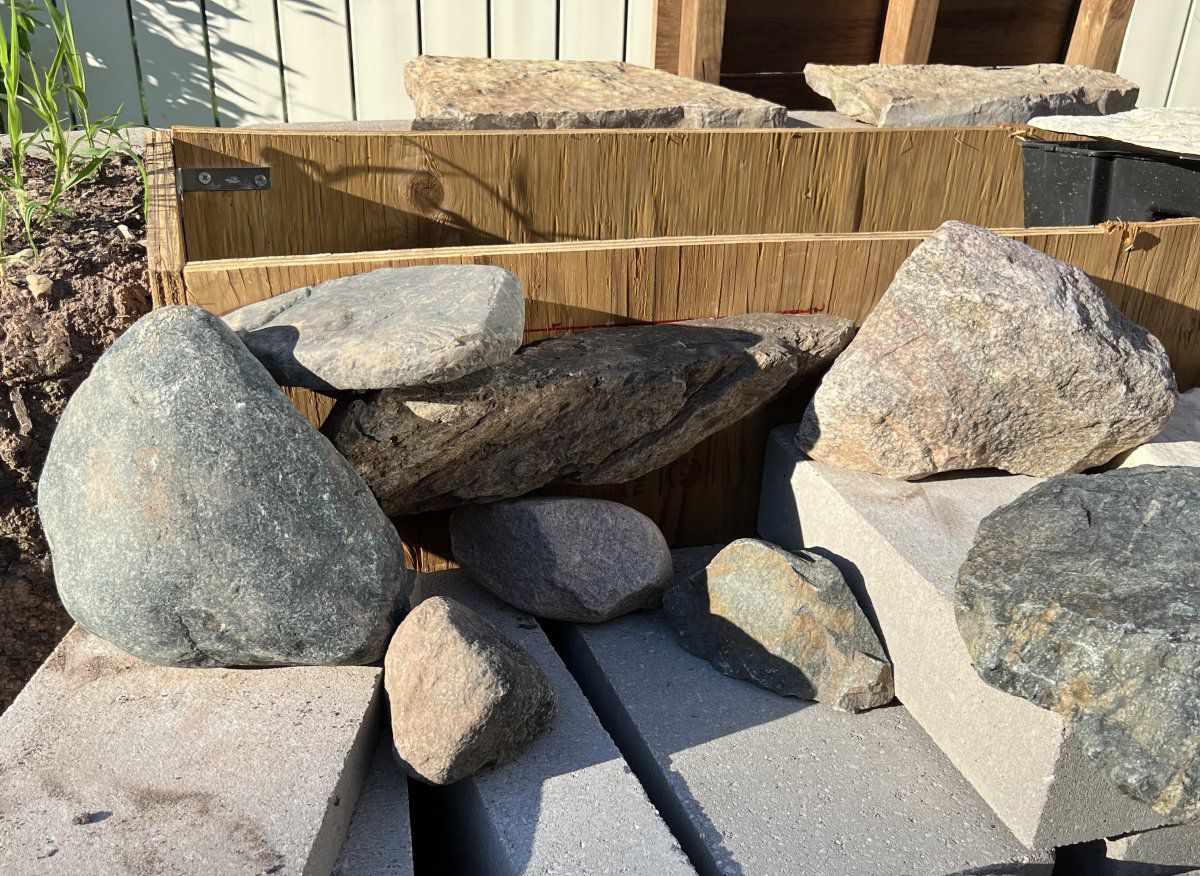 Thought about turning bottom blocks out to draw the step out visually but way too cramped w rocks. Not looking to drag the mound right-ward to the concrete to try and accommodate. 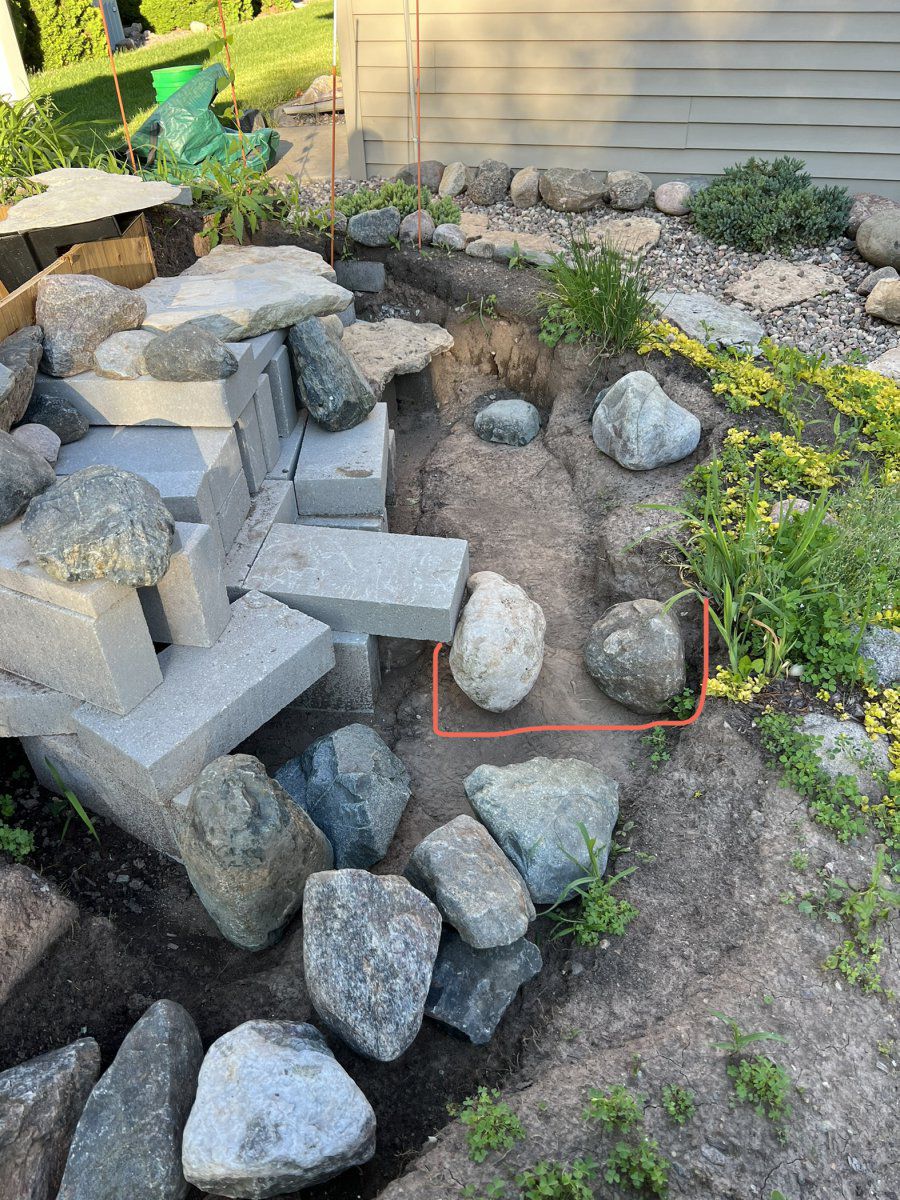 @cas HER PICTURE PULLED IT OFF BECAUSE THERE IS NO uniform shape to the slate/ flag stone on the bottom it looks like ledge uneven split where it wanted to and not what was balanced. But i would agree with @Lisak1 THAT THOSE TWO TYPES OF ROCK MIXED TO MAKE A WATERFALL is not an easy choice. the odds are against you.
Before you start i would go to you tube with the pro's and watch how they do it. they can make simple falls amd streams with one and two man boulders that really catch the eye.
to be honest with you other than the one cas showed i have not been impressed by flag stone falls and drops they just look so man made.

Until you get water running over those rocks, I don't think you will know how you want to arrange them. I know I built my first couple of waterfalls with one vision in mind and it looked completely different when I turned the water on. Some people build very successful waterfalls first time out, but with all the thought you are giving it, I think you are more like me and need to experiment.

Also, have you considered how you are going to hide the liner where you don't show any rocks in the pictures above? You've focused on the larger rock placement, but that whole thing will need rocks.

A picture may help. Here is my water fall evolution. First picture is when I first built the pond in 2004. Then with much experimentation (lots and lots of versions), this is what the waterfall looked like in 2017. The last picture is how it looked this spring.

Duxwig said:
Rocks just piled up would would have drove me mad.
Click to expand...

OK, but you're not supposed to just have rocks piled up. The foundation of your waterfall should be a dirt berm... you carve out your waterfall and fit your rocks to the contours of the waterfall. Starting with squared blocks will just give you a square looking waterfall, I fear. A waterfall built correctly needs very few rocks - the fewer the better, honestly. If you can get three good rocks - a spillway and two framing boulders - you can build a waterfall.