Trees getting water and nutrients from my pond

I recently did a clean out of my pond, and found something very interesting, at least to me.

As you can see, before the clean out, I have a wood bridge that runs over the middle of the pond. Part of the reason for the clean out is to replace the bridge, it's been rotted out and unsafe to walk on, and the concrete block pier underneath was coming apart as well.

So once I had the pond drained and all the muck and years and years of debris removed, and in the process I also removed a lot of plants, ferns, vines, and roots from various plants, in particular some roots from nearby trees. There is a ficus tree about twenty feet away and a shaving brush tree thirty feet away, and I found roots from them emerging from the concrete rocks and boulders, dipping into the pond.

Here is a picture of the pond after the clean out showing two areas where I found big tree roots. When I said big I mean a roots with diameter over 3 inches. 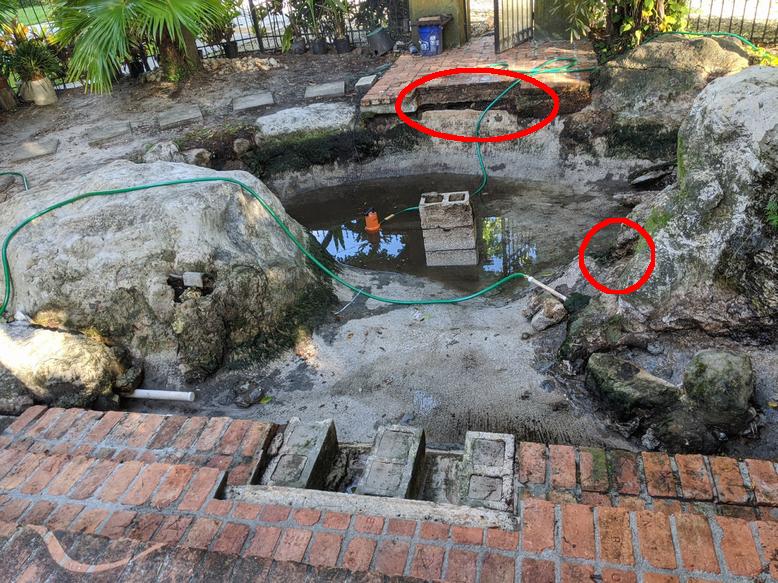 During the cleanout I was pulling, ripping and cutting anything that's in and around the pond. If I take the far end of that pond where the bridge used to be, there is a spot where I found big roots on the top edge of the concrete pond but under the bridge. Here is a closer picture of that spot after I cut away the roots there are still more roots. I had to make the cut because the roots had grown into and fused with the wood beams of the bridge. 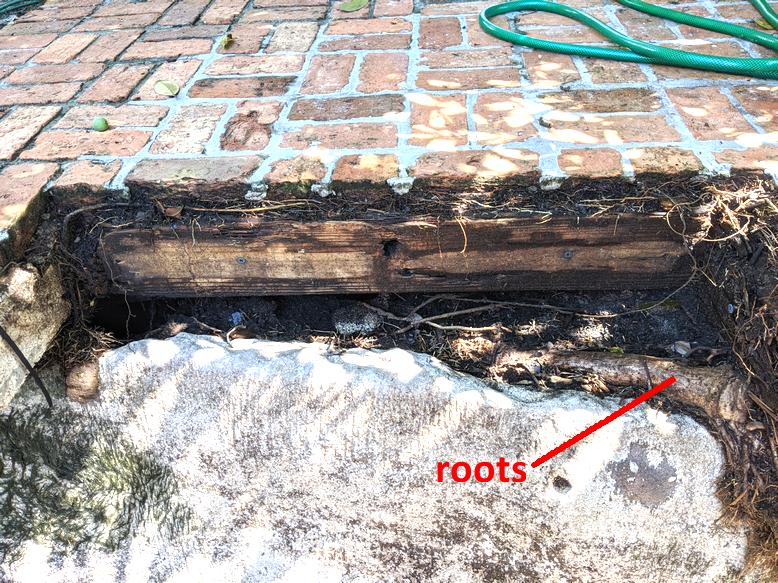 After that I decided to cut these roots even more to make room for the new bridge structure. 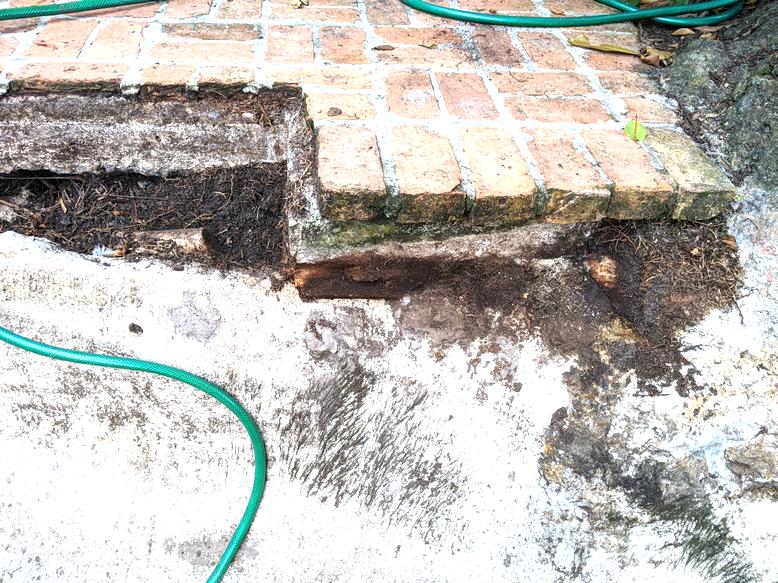 A week or so after the root cutting, the ficus tree (a massive tree, over 50 feet tall) began to drop leaves, not the normal yellow/brown leaves in the fall but many green ones as well, and normally around October/November it also drop fruits that are small red color figs, but this time all the figs dropped were much smaller and not even close to being ripe. I think the tree is telling me whatever I did harmed it and it has to get rid of leaves and fruits and focus growth elsewhere...like the roots.

So that leads to my question, this huge tree must have been getting a lot of water and nutrients from the pond for my root cutting to affect it this much...I am still rebuilding the bridge and can already see where I cut the roots back, they are already sending out hair line roots in abundance. I am trying to decide if I should cut it further back, or allow it to grow back and dip into the pond water.

The other tree, the shaving brush tree is also a mature 40' tall big tree and I cut it's roots as well, but it doesn't seem to be affected, at least I haven't noticed any signs.

I guess my question is, will allowing these trees to dip into the pond help the pond the same way a BOG filter help it?
Ad

As long as those roots aren’t going to pierce the concrete, then yes they will help in the same way a bog filter would in using nutrients from the water to grow.

I also had a root get into my pond. It had been there quite a while because it was close to the iris roots and I hadn't noticed it. I was concerned it was going to harm the liner, so I cut it out of the pond. Biggest mistake I made. It wasn't harming the liner and had been keeping my water clear. I am now getting algae blooms in the spring since I no longer have the root.

I would think a big tree would suck up quite a bit of water too.

As you probably know, ficus trees are very aggressive...I had a HUGE one in front of a previous house and had to put a root barrier in so that it did not uproot my slab (Florida) As jhn mentioned above, keep your eye on its progression into your pond in case it causes damage to the concrete...

Only a week later, the roots are sending out new roots where I made the cut.

So may be I should let these new roots dip into the water since that will help balancing the water chemistry of the pond?

My only concern would be the roots penetrating the concrete.

I'm assuming you aren't considering removing the tree, so you're going to have its roots heading to and into the pond no matter what. The roots will help bog-clean the pond. I'd keep an eye on the roots and do a small trim (not cut, just trim) once in a while, but let it go. Will the tree's roots heave the pond concrete in the future? Possibly, so have a plan of what you'll do then. I am impressed that its roots haven't heaved your patio already.
The bigger questions are: Did trimming that root destabilize the tree? Will it heave up the foundation of your house? An arborist can tell you if the root trimming has or will hurt the tree or make it more vulnerable to storm winds. I've been told that a established tree can use 10 gallons of water per inch of tree diameter (measured just above the base) a week during the growing season, but that's pulled from around the entire canopy.
P.S. Love your pond!

Not only have you cut the roots, you have also drained the pond that the tree has dined on for many years.

I would hurry up and finish the rebuild and get the pond filled up so the tree can get water with whatever roots are left. It has probably really become dependent on this pond for water and it is now in the equivalent of an unexpected drought.

I would not worry so much about the roots cracking the pond. You can always repair cracks if they occur.

GBBUDD said:
I would cut the root back way back and try to place concrete or block between the root and growth
Click to expand...

Same. The tree found a convenient source of water, but that's not to say it's the only source it has. It's clearly healthy and thriving judging by the new roots it's putting out. I wouldn't want to go to a lot of work to rebuild a pond and then have to contend with roots a few years down the road.