Thanks for all your valuable help and advice in previous threads, and to the extremely valuable threads and resources throughout this site. I've now pretty much completed the base construction of my pond and thought I'd share pics (since everyone keeps saying they like to see pictures!)

These first two pictures show what the garden looked like when we moved in around July. Basically one massive weed patch. Fun times.

These two show initial layout and the start of construction.

Because the pond is on the top of a retaining wall made of loose stones I did not want to dig down deep as that would potentially put pressure on the inside of the retaining wall and weaken the entire area. If the pond pushes the retaining wall out then we have big problems. So half the depth, or more, comes from building mud embankments.

These images show the ongoing construction, installation of the liner, and the setup of the home made pump vault and intake bay box. Plus the first test fill and start of the manifold for the bog.

This is the (so far) finished build. It's got rocks around the outer edges of the liner (apart from some gaps where I am going to plant flower beds). It's been a big weekend. Every single part of my body aches.
There are some shots of what you see when standing on the ground in front of the retaining wall. At that point it looks like an infinity pond, you can't even see the water if you're short. The higher shots are looking down are from the upper deck and the living room, so when you look out from the house that is what you see. Then some shots are from the rear of the pond looking towards the house.

I think it came together alright! Fingers crossed it all works, and doesn't fall apart and collapse.

I still need to find myself a ton of rocks to do the last wall of the pond, although I am considering just leaving that section black liner. Then I think I will also fill the bottom of the pond with river sand or 10mm gravel, though I think I'll need to vacuum it periodically due to the gumnuts falling in there so perhaps not. I am undecided on those yet. It's possible the plants and shadows will make it unnecessary.

Now to plant out the bog, get some lovely bacteria going, and get some fish (the kids are very excited about that last one).

Bring on the frogs!

And thanks again to all for all your help. Hopefully this works and I won't need to spam you too much more. Cheers!

Very nice pond, and glad we could be of help!

This is so much fun to see!!!!! It makes me want to get out in my yard and work! Your pond is beautiful and will be even more so when all the plants are established -- WOW! Keep sharing pictures!
FYI - don't be surprised if your fish are extremely shy after you introduce them into your pond. Get your kids mentally prepared to not see them for a while. Once they feel "at home" though, they will come to say hello when they know you are outside!
Congratulations!
Ad

Wow that turned out great and it's so big and look at all those beautiful plants!

I was looking at the first photos and when the liner went in seeing the angled sides was leading me to think it' was going to be a chore to get it covered and have it look natural but you knocked it out of the park NICE JOB!!

Gorgeous!
All that hard work paid off.
When I added on my bog this past Spring, I too was aching all over, especially my lower back. My wife ran out and got me an electric heating pad. That thing was the best!

Very nice! Love the change over!

I was thinking the same as @GBBUDD - I thought we'd be sharing how to alter the edges to make it possible to finish and then BAM! You took a very unique approach to edge work. Share more details of that if you don't mind. And the pictures are GREAT! Beautiful pond!
Ad

How pretty! Thanks for taking the time to share the pictures.
Ad

Regarding the edge work, basically this pond is mostly made up of embankments. It's on a slope going downhill towards the stone retaining wall. So rather than dig out a deep hole, I mostly had to dig down and then bank the dirt up in a big embankment mound at the lower part of the hill.

I just kept digging out and mounding up the dirt I had dug out until the main lower embankment was level with the much smaller mound further up the top of the hill. I also piled some rubble into the base of the embankments and the dirt I was digging up was largely clay, which helped turn it into a solid mound. Then I pinned down some hessian over the top of the mound and wet it all with a hose, so the clay would run together and form a solid lump. That was the structural basis for the pond. In image 5 below you can see the angles of the hill, and the angles of the pond embankments.

However, that meant that when I put the liner in I had a big 2 foot+ rounded mound at the bottom edge by the wall, and a small half foot mound at the top. So to cover all that up I just got a huge amount of bush rock and laid it both inside and outside the embankments, inside and outside the pond, leaning on the embankments themselves to add additional weight on the embankment to keep them in shape over time. It took a lot of rock. And I had to carry each piece down 4 storeys of stairs to get it into the backyard. I do not recommend that to anybody.

It looks pretty good though I think. At the front of the lower embankment I left a foot or two for a garden bed, and planted it out with birds nest ferns, bromeliads, and fuscias. Still very much a work in progress. Unfortunately the tree ferns don't seem to be taking but that's the fun of plants I guess. I'm also going to fill in lots of the holes between the rocks on the pond with plants that can root into the embankments and give it some added strength there.

Since last update I've rocked in the last wall of the pond so it's all rocked up now. There's also a few more bog plants, though still a lot more to come in there.

In the images below:

1- Garden, you can see the upper level of the garden where the pond is etc
4 and 5 - You can see the angle of the embankments
7 - This is the intake bay. The pump is under those pebbles, in a 100L plastic tub that's buried in the ground being a pump vault. There's an upside down plastic crate with holes cut into the bottom forming most of the surface area of the bay, then the rocks around it are foamed in to hold them in place. That's the only area that is foamed up, the rest of the rocks are just stacked up.
8 - The bog has a single 2 inch PVC pipe going down the middle of it, with a couple of short offshoots. There's a flush cap on the end buried just under the gravel. It still needs a bag or 2 of gravel though, the water is half an inch over the top of the gravel.
10-12 show the pond from the lower garden.

You can still see the plastic liner at the bottom, but I'm hoping that when I get a few good established aquatic plants going, and matting up on the top a bit, then the bottom liner will be hidden. Otherwise I will just pour a few bags of river sand on the bottom. I'd like to avoid the river sand if possible though as it would make cleaning the huge amount of leaves that will fall off the mammoth gum tree above more difficult.

If you want to see a video there's one at this link. You can see heaps of the baby fish in the video, which I couldn't get shots off unfortunately. There are hundreds of them. I bought 10 little native fish (that grow to like 1 inch size) and in a week they bred and now there are hundreds of babies everywhere. You can also see the flow out of the bog, and the massive gum tree above. 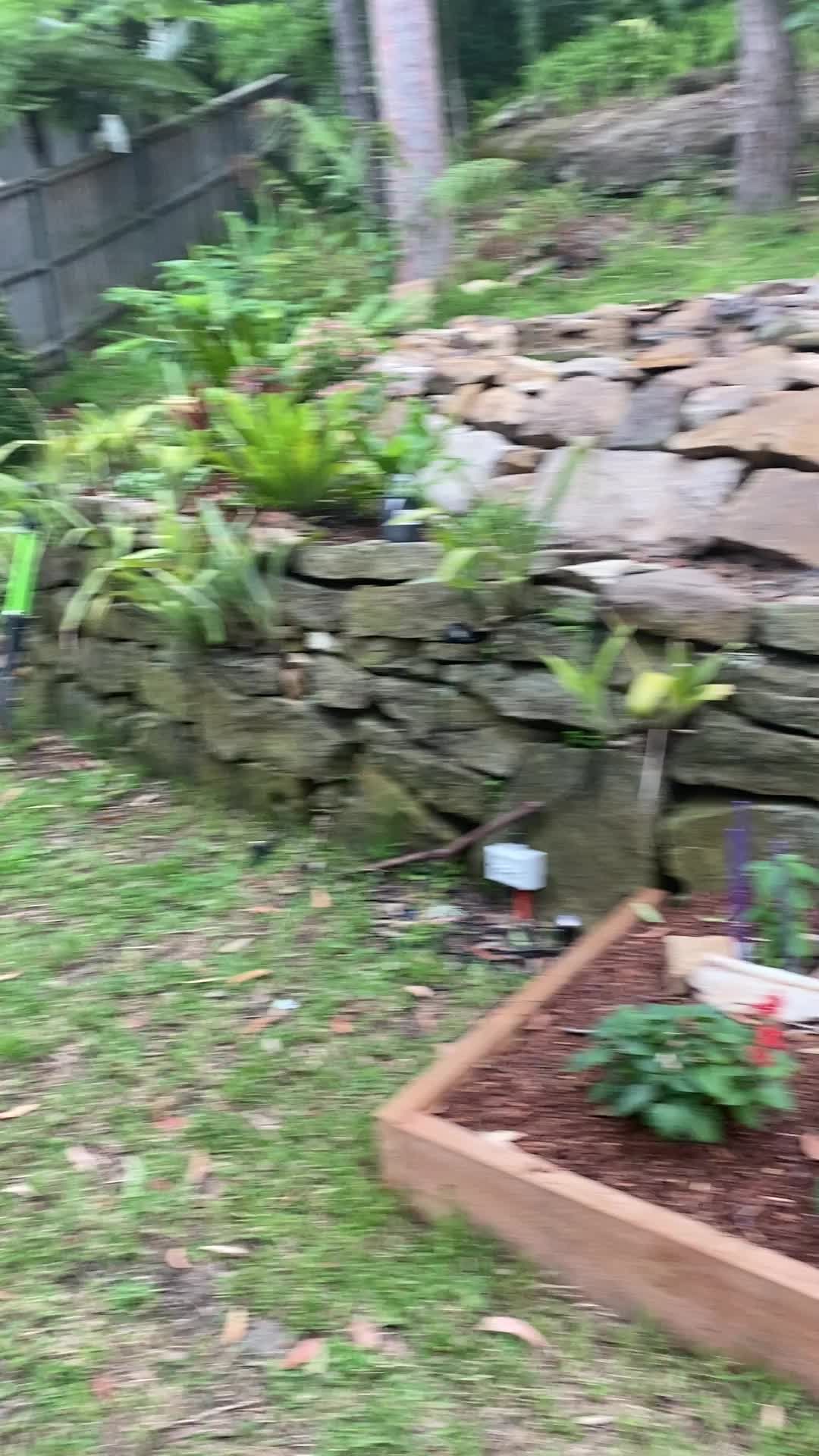