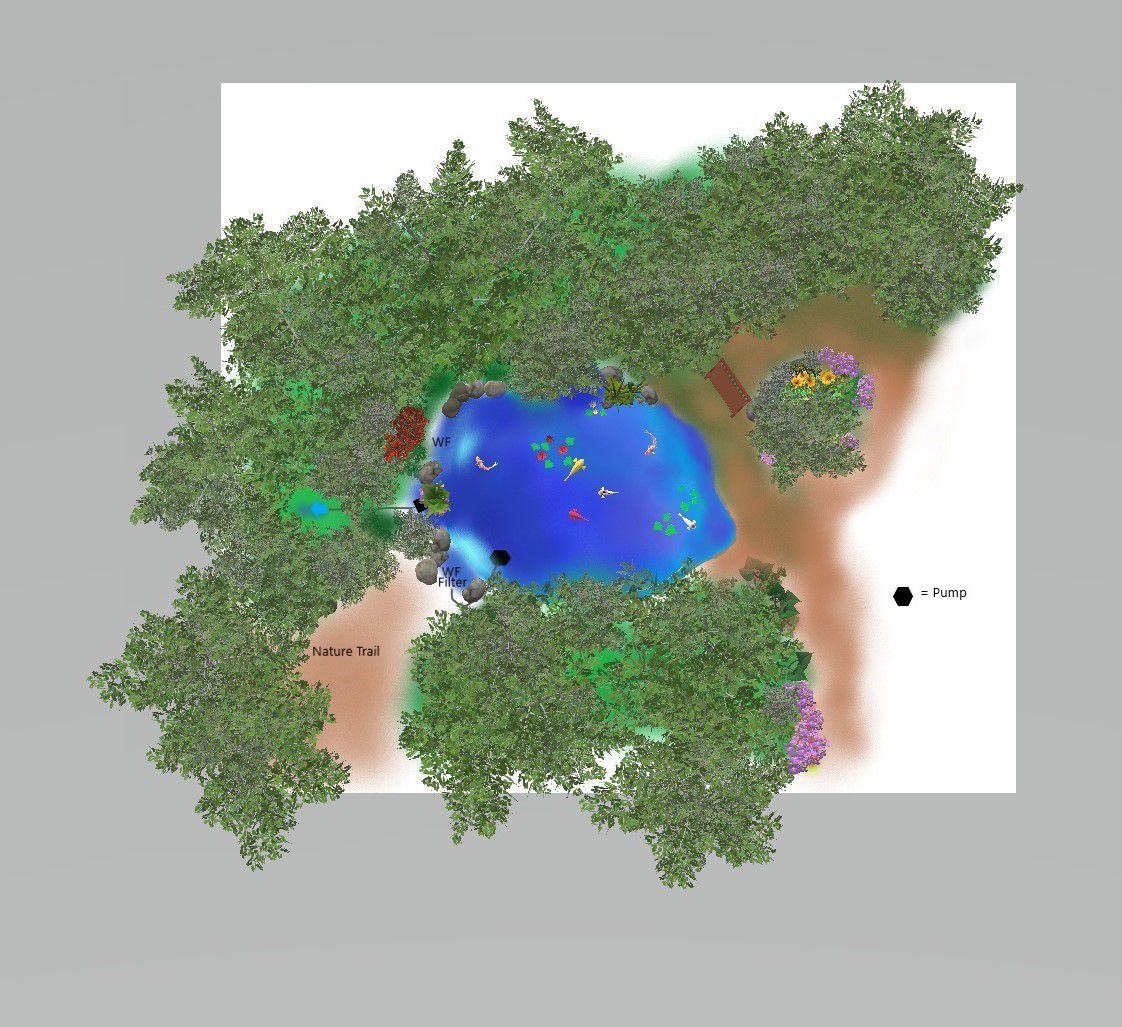 Ponds at the Old Bear's Den

This past February I built a small pond alongside our cabin to "fill in" a hollow left by a massive stump that had been pushed there during the clearing of our build site. We were limited with how wide and deep we could go with it due to risk of damaging major roots of nearby live trees. I knew we would have the option of expanding later depending on how much my husband would allow me to get away with!

As it turned out, my husband loves the pond and is all about going bigger, as well as participating in the build, so we are currently working on the expansion together. The existing pond will become our bio-pond, and a small stream will flow from it to the new pond of approx. 2,000 gallons. I'll post our progress here.
Click to expand...

Oh that's nice! I can just imagine how relaxing it would be to sit on that great porch and sip some 'Old No. 7' and enjoying the view and pond. Absolutely love your bio about the nitrogen cycle and customers who didn't care. Oh yeah, I've heard it too, "Hey, just give me some fish and something to keep them from dying!' Good luck!
Stephen

THanks for sharing your showcase with us @Somethin' Fishy , it's a very nice pond and awesome setting and we're exciting to see how the 2000 gallon pond is coming along!

Very nice, some beautiful fish too.

When it's too hot to work outside, build pond things indoors! (waterfall rod)
Click to expand...

More work on the shoreline, hiding liner and blending things in.
Click to expand...

The main pond is complete! Now on to the creek construction.
View attachment 113891
Click to expand...

It's coming along quite nicely @Somethin' Fishy !, keep working hard and posting updates.

Thank you @ShawnInfirmity. Now to start on our creek!

Scrapped the creek idea for a larger, nicer viewing area. So other than a few small items to trim up, and running my electric, we're done with this project!
Click to expand...

Everybody needs beauty as well as bread, places to play in and pray in, where nature may heal and give strength to body and soul.

I spent many years in the pet/aquarium trade and the one thing that tends to confuse new aquarium/pond keepers the most is the nitrogen cycle. I’ve explained the simplified version of it to hundreds of folks over the years, and it usually resulted in a tilted head response, and then frustration when I wouldn’t sell them the 50 new fish they wanted for their brand new 10 gallon tank.

Many people seem to confuse the term “cycling” as meaning that water is moving though their pumps and filters. So after a week or two of perfect water test results, they think the “cycle” is complete and they want to load up with fish. Uh, no.

So I thought I would share the water testing results I’ve logged on our new pond, just so that some of the new hobbyists scanning the forums for info can get a general idea of just how long it can really take for a new pond to “cycle”. Obviously, NO POND IS EVER THE SAME - as so many factors play into how fast or slow it may be for bacteria to colonize and for the nitrogen cycle to “complete”. Temperature, pH, ammonia load…and the list goes on - and gets deeply scientific. But this post isn’t meant to open up a biology book of information to muddle brains, or feed debates or egos. I am merely posting my results, in a simplified manner; to drive home the point, that the nitrogen cycle takes time. And that patience and care are required when stocking a newly filled pond.

Filtration: One 17” filter falls unit with pads and bio-media with outflow over several stones into a deeply graveled spillway which then flows over a stone slab before re-entering the pond. No skimmer. The pump moves the water through this system at a rate of approx. 1 time per hour (and that’s the way I want it).

Other aeration/water movement: Filter-less side waterfall pumping at around 1,700 gph. No area of this round-ish pond is left stagnant.

Plantings: Began being added at day 3 and continues

· Three days later the ammonia rises to .50 ppm, and STAYS there up until week 10. No water changes, no freaking out, no stress to fish.

Testing will continue, as it is possible for things to fluctuate. But there it is, ONE example of how long it can take to start seeing results in the nitrogen cycle.