Building pond in Israel by a Granny!

Don't know if you have ever seen grafting. Or simply rescuing a broken off limb if it's at a Y where you said it split it sounds like it. They now sell basicly a little thicker than a sheet rock course screw and you can screw the branch back on . Wrap it with sulaphane./ cling wrap and odds are it will heal its self.
Sorry to bring this up after the chain saws have already been out but maybe next time you might be able to save it.
Ad

Yep, I'll be using some of those techniques on the lime tree, assuming there's enough left to hold the broken branches to. For the olive tree, there's no way, as the branch that came down is equivalent to a full size tree and weighs (possibly literally) a tonne.

But yeah I've saved broken limbs by roping them back onto the main tree and waiting for the tree to grow around the wound.
Last edited: Jun 27, 2022

YShahar said:
Well, I've had a setback, though not one directly connected to the pond. Late last night, I heard a sharp crack and then a loud crash. I thought part of our pergola had come down, but then on the way downstairs to check it out, I realized that it was probably part of the olive tree that had fallen. Sure enough, I found that fully half the olive tree had split and fallen, taking out most of our beautiful lime tree as it came down. Part of it did land in the pond, but evidently no damage done there. Note: this is why olive trees are kept small! The wood is incredibly heavy and this tree was absolutely covered with growing fruit. So much for this years harvest!

I've spent most of a very hot day out with both of my chainsaws working on getting the branches down to manageable size. The entire garden is full of olive branches, leaves, and twigs. The lime tree can be saved (I hope) but it's going to be a couple of years before it's as shapely as it was before. As for the olive tree, I'm going to have to figure out how to prune down the remaining half, as that part is going to come down too if nothing is done. The part where I'd need to prune is way too high for my pole saw. Ugh!

Meanwhile, the pond water is back to murky peasoup, after a period when it had cleared up to the point where I could see the bottom of the deep end. I may not see most of my fish again until I can finally get the bog built. On the bright side, I do get to see the larger fish, as they've taken to coming into the intake bay to munch on something.
Click to expand...

Sorry to hear of the tree loss(es) and more hard work to do. Maybe some olive wood logs go with/ into the pond + bog?

SarahT said:
Sorry to hear of the tree loss(es) and more hard work to do. Maybe some olive wood logs go with/ into the pond + bog?
Click to expand...

I'll definitely find a use for them! To go in the bog or the pond, I'll need to wait until they've been out in the weather for a couple of years (or decades). But I can still use them for retaining walls and the like.

YShahar said:
I'll definitely find a use for them! To go in the bog or the pond, I'll need to wait until they've been out in the weather for a couple of years (or decades). But I can still use them for retaining walls and the like.
Click to expand...

i'd imagine wood out there is almost as precious as is water.
Ad

GBBUDD said:
i'd imagine wood out there is almost as precious as is water.
Click to expand...

Yes and no. Olive wood is plentiful, since olive trees grow fast and need to be kept cut back fairly vigorously (which is what I failed to do in time, leading to the current mess). On the other hand, actual timber trees aren't grown here. Much of the country was once covered in native oak trees, but those were cut down by the Turkish empire to build railroads. The subsequent erosion led to much of the land becoming semi-desert. One of the goals of the Jewish National Fund over the past hundred and twenty years has been to reforest the country and try to reverse the erosion and water loss caused by the deforestation.

I'm also trying to do my part by planting mostly native species or those that grow in similar climates. The pond is part of that too, as it will hopefully attract some of the birds and animals that help to spread the native mediterranean plants.

GBBUDD said:
Your ok for an old bird. !
Click to expand...

Speaking of birds, the kingfishers are still at it! See if you can spot the little would-be fish thief in this photo: 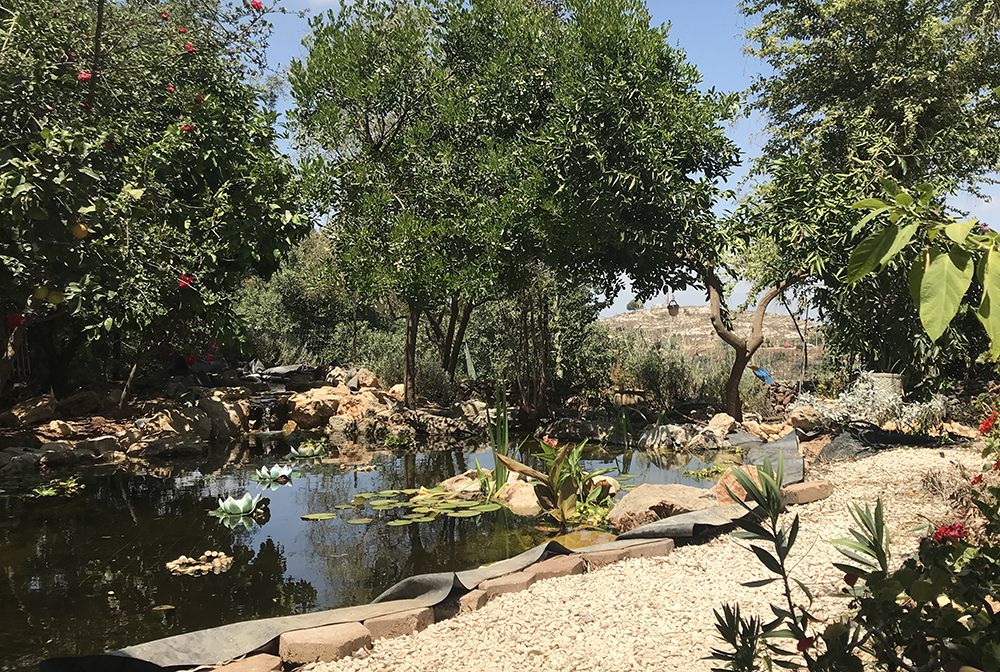 Here's the photo zoomed in on the kingfisher: 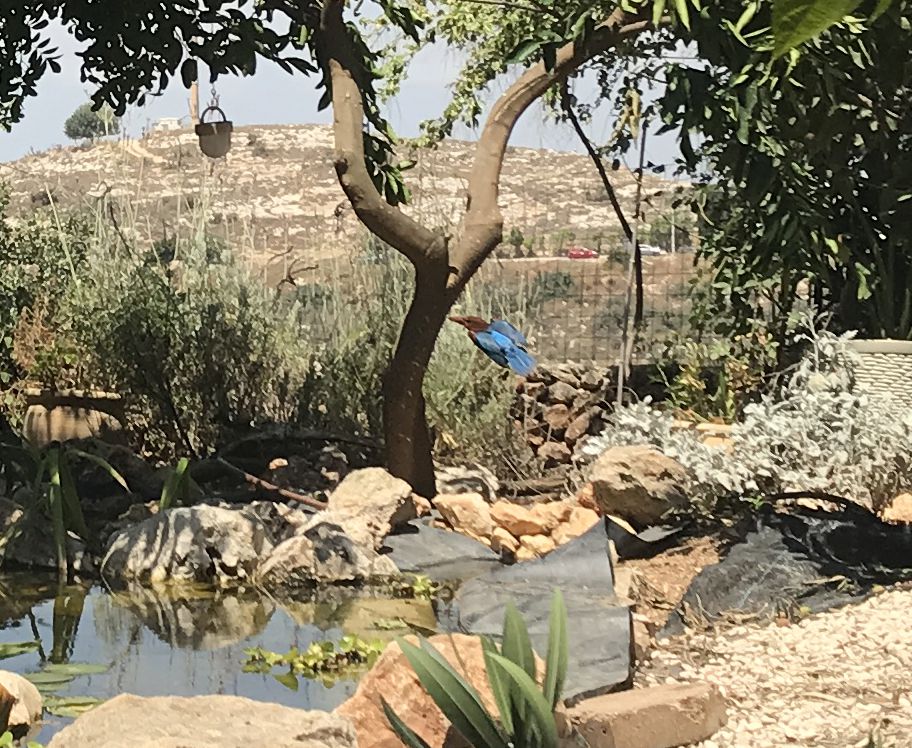 Meanwhile, I'm still working on the edging on the near side of the pond, gradually replacing the paver bricks with proper rocks. I dug up some nice rocks from the vacant lot next door and should be able to use a few of those here and there. I've also been washing lots and lots of gravel and putting it in the pond one handful at a time. Going to take forever to go through it all! I'm guessing that of the 3 tonnes that I've got left, about 5% is sharp flint, unusable for the pond, but good for paths.

Pretty bird with a taste for fish! But so far the kingfishers seem to be deterred by my DIY air defense system and haven't gone after the fish. I saw one of them eating a lizard, and the one I photographed swooped down to grab some sort of insect and then sat on the ground for a bit munching on it.

Oh, and have I mentioned that kingfishers are seriously noisy? The've got a loud call that sounds like "Aack-aack-aack!" and I swear they're daring each other to swoop under the porch awning when I'm sitting there. I can almost hear them egging each other on.
Ad

king fishers here are less then friendly and daring. they see you and they're moving on. While the battle ship blue coloring is ok your version out there blow away ours

Been awhile since I updated this thread, so I decided to add a few photos, just for the sake of completion. First, here's a view of the pond from the West, looking back toward the house: 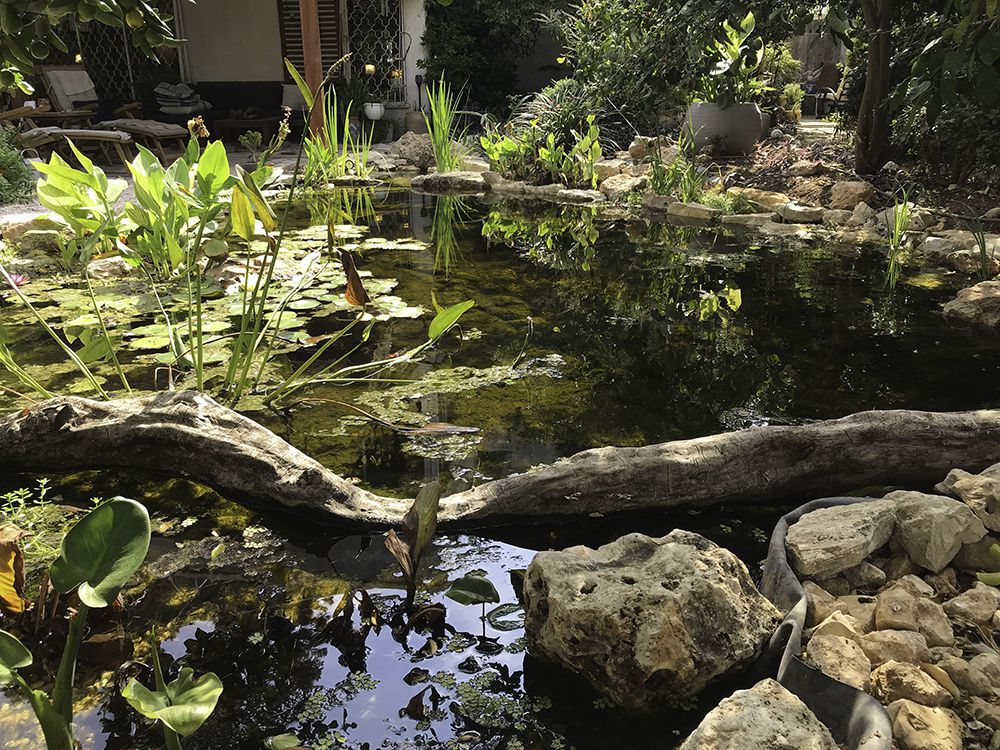 Here's how it's looking from the main viewing area on the patio:

The whole summer I've been seeing dragonfly nymph exoskeletons on the rocks around the pond, and I kept hoping I'd catch one actually emerging as a new-born dragonfly. Well, it finally happened! The other day as I sat down with my morning coffee, I happened to noticed something on one of the rocks near the intake bay. Here are some photos: 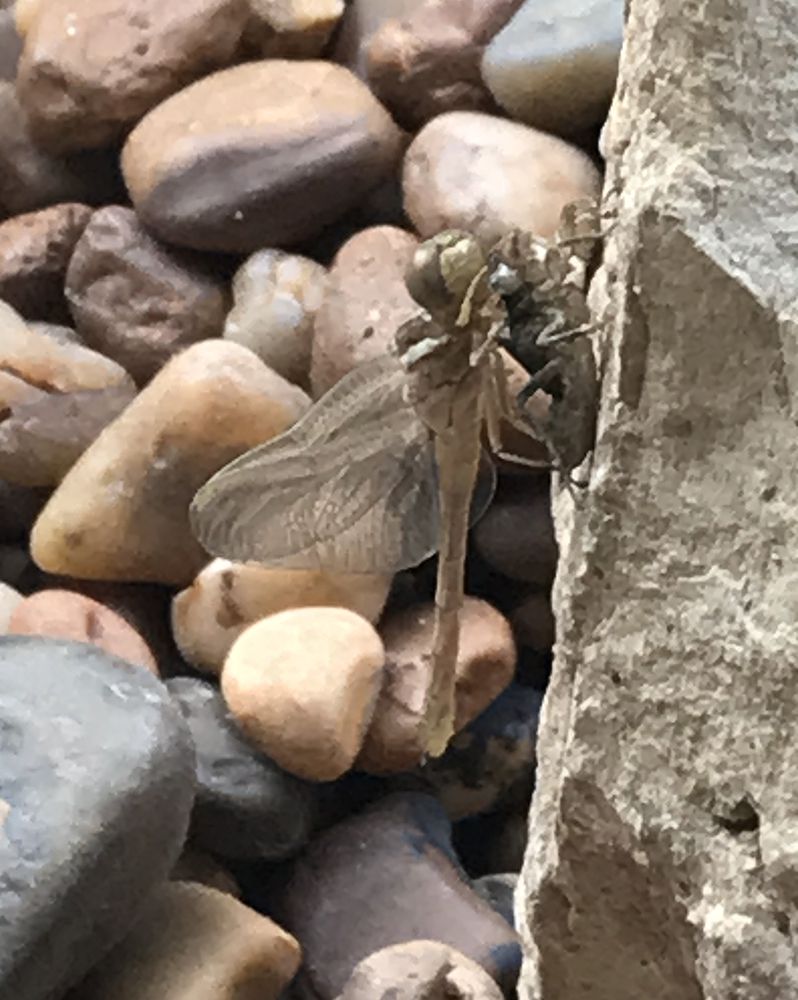 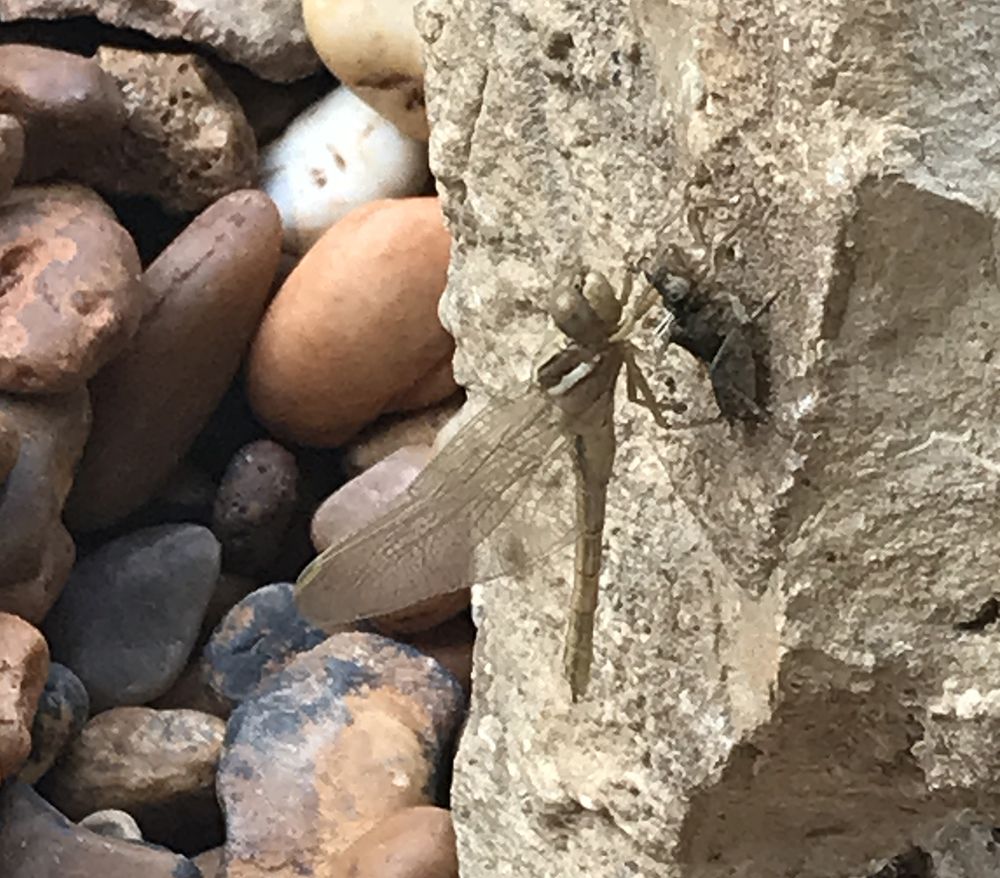 Another of those times when I wish I had a better camera!

And today we "accidentally" acquired our first koi... This happened as a result of my posting a couple of photos on the community Facebook list to celebrate the first rains of the season... Because, it's the First Rain, after all!

But someone on the list saw this and sent me a message asking whether I would like a fish -- " A very big fish" she said, "that is desperately in need of a new home."

Turns our that she had one surviving koi in a tiny pond that had been set up by her son-in-law. I went over there this morning, armed with a net and an old cooler. What I found was one of those tiny preformed fiberglass ponds filled with black water. No filtration, and a defunct waterfall. And somewhere in the black murk supposedly resided a "big fish".


Well, it took a lot of poking and swooping and splashing, but my net finally caught black and silver koi, who was deposited into the cooler and doused with the horrid water from the "pond" in lieu of anything else to put in there. Once back home, I put the koi in a larger tank and little-by-little added water from our pond until I could at least see what it was I was dealing with. The critter measures about 30 cm long, has a black-on-silver pattern and white fins. Very handsome overall, with large scales along the dorsal line.

When I finally let him/her free in the pond, s/he immediately began chasing the existing goldfish around the pond, but within a few hours seemed to develop a rapport with Fancy Fin, our largest Sarassa. Here are some pics: 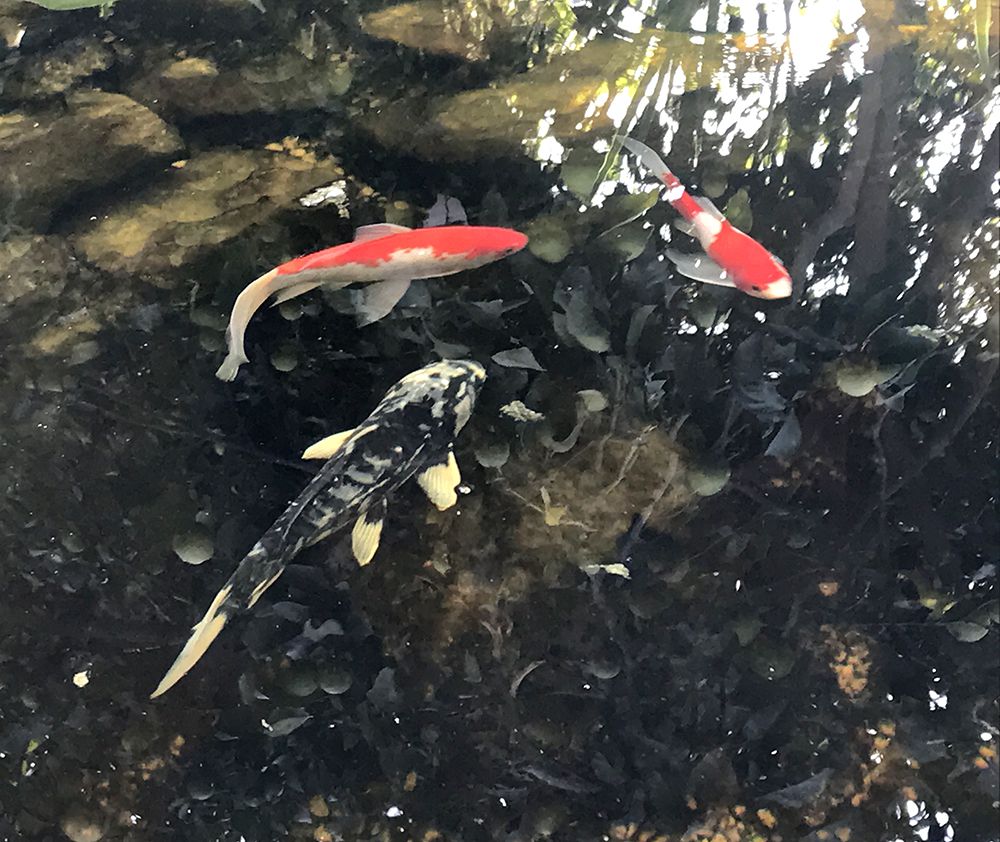 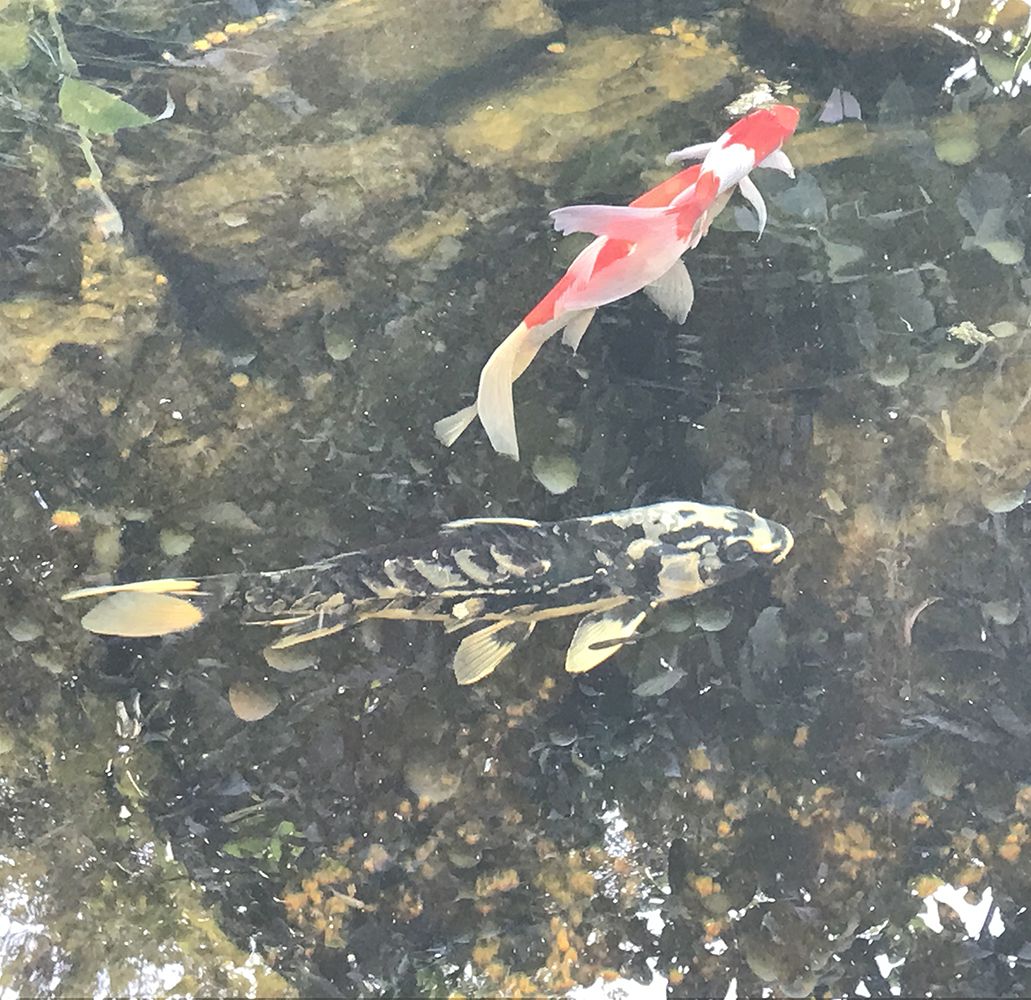 From some research online, I gather that the color pattern on this koi is called Kikorukyu. With the large scales along the dorsal line, he looks positively Jurassic!

You have to be very happy with your efforts, the pond looks fantastic. Love the two recliners for that afternoon snooze at the waters edge, like a reflecting pool
Ad

Damn, that pond is looking gorgeous!

Oh My Lord! This turned out incredible! Such a lush environment, and some beautiful new fish to call it home.
Ad