As I mentioned, I use two layers--a black and a green one. I use PVC pipes/elbows as a stand, you can see it in the link of my barrel that I already provided you a bit back in this thread. You can use a milk crat if it fits in your barrel, why not!

I have one barrel and then an old Laguna pressure filter that can serve a 3,000 gallon pond. My barrel is first and gets rid of the thick stuff and then my pressure is next and serves more as a fines filter.
Ad

Do you think I should use both barrels, or will one do for my 2,400 gallon pond? Thanks for your help!
K

As I mentioned in the thread already, and I think koiguy also suggested, you should use two. The rule of thumb is one 55g barrel for every 1,500 gals in a pond. It's way better to overfilter than underfilter. And inevitably we put too many fish in our ponds because we're nutty about collecting them.

I can assure you that you will be sorry if you only use one because it will be way harder to keep tip-top water conditions. Try to do as much as you can right the first time so you don't have to keep fixing things later.
S

Roger that! I need to go back and read! I will use both of them. Thanks for your help!
S

Me again, is there any benifit to having my rear barrel higher than my front barrel that spills down to my waterfall? That is, will I gain anything by having the back barrel higher than the second barrel? I found out today while removing my old system that I don't have a lot of room between my fence and my garage, it is going to be a very tight fit, and the less I have to do to get the barrels in there, the better. I am attaching a photo of my three 30 gallon barrel system. That is what I mean by having one barrel hight than the other, but in my new system, I am going through the sides, not the top as shown in my old filter system. Also my bulkheads arrived in the mail today, but the bad thing is, I threw my back out getting the old system out, and now I am resting.

the height (or drop) from one barrel to the next helps with more pressure (higher drop equals more atmospheric pressure) and would increase flow rate but it's only a few inches so not sure it's going to make a huge difference.
Ad

So you are saying that it would be benificial to have the staggared system. I was thinking about 8", or the height of a concrete block. Just going to be a tought squeeze is all.
K

i agree with newday in that I really don't think it's going to make a difference. Any filter system like this that I've seen has never had any barrels raised higher than others. But perhaps the resident scientists here have another opinion.

Anyway, I thought you were going to do the two barrels as independent units rather than have them connected?

As for 21" scrubbing pads do a goggle search. It's been a long time since I used them and lost the link where I purchased them.

I think that cascading drums is a potential for failure. Having them independant of each other allows you to service any one without disturbing the other. Also, if you had to take one out for any reason, the pond will continue to get filtation from the remaining ones.
K

and i'd worry that the downstepped barrels like that could also lead to overflow, too...
Ad

I don't want to run two pumps, my old system had three barrels attached to each other, and it seemed to work pretty well, I just wanted to up my filtration. Only one of those barrels had media in it, the other two just got rid of sediment. So I am going from one 30 gallon barrel full of media, to two 55 gallon drums full of media. It is going to be similar to the image below, but all my lines will be 2" lines. Also, the water will be swirlled as it enters each barrel, and I am going to put drains in the bottom of each barrel. The first barrel will have the lid left on tight, and the second will not so the water will free fall back to the water falls. So, that being said, what are your suggestions?

The image as you have it will work perfectly, yes. If you want the water to swirl, then you should put elbows on your incoming pipes like in my barrel design that I sent you the link to you earlier in the thread. That will push your sediment down below your eggcrate and your clean water will rise.

That is exactly what I plan on doing. This was a design I found on the net, but I plan on the first barrel just being mechanical, and the second barrel being all bio. How does this plan sound?
K

yes, that works perfectly. Much easier to have to clean out one barrel more often than two.

Are you adding in an overflow emergency pipe, Shroeder? This would be a pipe at the higher point of the barrel above your main return pipe (water out pipe in your photo). In case the water line hits the overflow pipe, your water would be directed back into your pond by-passing your barrels.
Ad

An overflow pipe would be nice, but I caution its incorrect use. It would be nice to have should you decide to place a ball valve between barrel one and barrel two. This way you could shut off the flow to barrel two and bypass it for when you need to service it (this should not be often at all, however).

It's continual use however might deflect more water than you care too from being cycled into the second barrel. I can't say exactly how much because of the many variables at play here. I see that you have changed your design from a 1" pipe to a 2" pipe. This will help but only address's one of the variables I brought up earlier in your bottom fed second barrel.


Let me try a different approach to explain what is happening (and did happen in your original design).

Have you ever noticed when buying a pump that flow rates are listed at different head heights? Did you notice that as the head height increases, flow rate decreases? Why is this?

As water fills the pipe and is directed uphill, the wieght (mass) of the water in the pipe increases. The higher up the water has to travel, the more wieght the water has ( due to an increase in volume). Additionally, not only the vertical distance the water has to travel effects the weight, but the size of the pipe as well. For instance, if you take a small pond pump of say 2000 GPH and feed it through a 2" pipe a distance of 8 feet up a 45 degree slope into a waterfall basin, you will probably get a pretty decent flow ( I am guessing around 1400 GPH depending on the pump). Now if you take that same pump and feed it into a 20 inch pipe up the same distance, you probably won't get much flow at all as the pump cannot overcome the weight of the water and its resulting backpressure.

I'm also doing a 2 x 55 drum filter and I plan on exiting the bottom of each barrel for the reason above. I have a simple PVC pipe that splits the output of my pump to feed each barrel (also has check valve inline to ensure both drums don't gravity feed back into the pond if the power goes out, (3rd outlet is to feed my water fall) 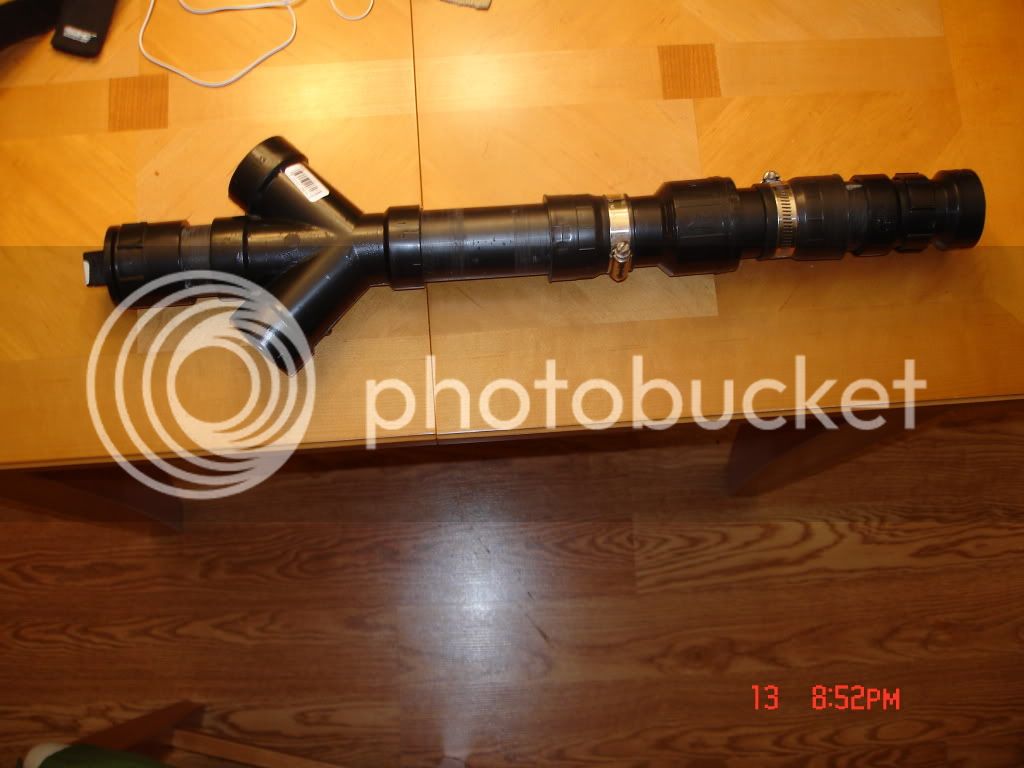 another good reason to exit a barrel at the bottm is you're using gravity and weight of the water above the exit hole to increase the pressure and flow out of the barrel. When exiting a barrel at the top you are not getting any assistance from gravity or weight of the water. This makes a big difference in flow rate considering the barrel is 3 feet tall.
Click to expand...

While this statement is entirely true, this design too has it's compromises. Mechanical filtration is best done from the bottom up, this helps the larger debris to settle in the bottom and reduce clogging of the filter media. This is why the bottom up design in a single barrel system works so well, you can flush the larger debris. if you top feed the first stage of filtration you going to find yourself replacing/cleaning the filter media much more often.

As per flow rate, your never going to get more flow out of the barrel then you put in, unless your sit there with a ball valve and close the valve and allow it to fill then open it to let it drain, over and over again.

Biological filtration is better from the top down, as you will have a larger concentration of good bacteria this way (kept wet but not submerged).

This said, in designing a pond filter (IMHO) more attention needs to be payed to good mechanical filtration over that of biological. Nitrosonomas and nitrobacter are going to populate every surface in your pond. The liner, the rocks, the plants, the soda can your neighbors child threw in your pond, etc etc. It will even populate the surface of your filter pads that your using for mechanical filtration. Thats not to say that bio-media is not important in your filter, it effectively increases surface are of your total pond and thus increases the amount of fish you can have. But, what I am saying, is that bio-filtration happens naturally. However, mechanical filtration does not.
Ad

since I'm trying to move the drums about 15-20 feet from the pond I pickup a lot of effective head presussure from the tubing and height difference from pond to drums.

I want to get as much gravity working for me as I can to get water back into the pond on the return.

I like the idea of being able to add/remove/clean media from the top of the barrel. But since I have 2 barrels running independantly I may choose to dedicate one to Bio and one to mechanical. I have not decided on the final design yet.

I also wonder that everyone targets X turn over of the pond water per hour when they pick the pump size but given the poor design of the filter or drums and return rate due to gravity feed returns that it's not even close to the 1 or half pond volume turn over rate per hour.

When it comes to mechanical versus biological. I have to think Bio is more important as stuff breaks down it creates ammonia which kills fish. Mechanical just collects large particels but they still break down and create ammonia no matter where they are in the pond or collected nicely in the filter.

I suspect the DIY barrel filters are so effective due to the Bio advantage and not the pure mechanical aspect of the filter.