Got finagled into taking a koi, it needs a home

First off, I'm by no means a pond guy (yet), have multiple aquariums but have not yet secured the financial stability to have my own koi pond built nor do I have somewhere to build one.
Yesterday I was doing some craigslist browsing and came across an ad that someone had posted about rehoming a cichlid they had that was in their exact words "about 4-5 inches". I have a couple 75 gallon tanks ready for stocking so i figured why not give this cichlid a new happy home, according to the poster the afformentioned ambiguous cichlid was just being a general fool and causing trouble with the smaller fish.
I couldnt tell what kind of cichlid it was from the pictures and it was only referred to as a "cichlid" in the post, I should've probably asked the guy but I figured I'd just figure out after I grabbed him.
This was something that could've probably let me know what I was in for sooner had I asked more questions.. after my girlfriend got off work we drove to this guys house to pick up the mystery cichlid.
I pulled up and immediately see the guy waiting outside his house with a home depot bucket, so I say "i assume the cichlid is in there?" and he replies with "well it's not really a cichlid... it's a koi."
He proceeded to lift the top off the bucket and reveal a ~1ft long white koi. This koi was in bad shape, his eyes and scales were in decent shape but his fins were in terrible condition. I don't know if it was due to aggressive fish or poor water quality but I have a soft spot for animals and my mind immediately decided for me that there was no way in hell I was going to leave this poor fish with whoever originally let this happen to him.
I basically told the dude I'll take it without ever bringing up the fact he lied to me just so I could get home with it as soon as possible. I drove home as quick as possible and put him right into my widest 75 gallon hospital tank. I've been doing constant water changes and he seems to be okay besides the fins, hes eating and hes active. Hes a fun dude to spend time with but I don't have the resources necessary keep him forever, he can't live his whole life in a 75 gallon aquarium by himself, he needs a real home.
This is where the tricky part comes in because I live in arizona and koi ponds are not the most popular thing here (i think). If any of you would like a free friendly lovable koi fish for your pond, i live on the west end of Phoenix near the border of Glendale and hes free for pickup.
BUT I will not give him to just anyone I will only feel comfortable giving him to someone responsible and with a large enough well kept pond for him to be happy in the rest of his life, which I'm sure is the case for the majority of you.
If any of you live in Arizona and need a new beautiful white and grey spotted koi for your pond I will happily help you rehome him.
If I don't have any leads by next weekend I'm going to visit some Botanical gardens, aquariums and butterfly pavilions that have ponds where he would be happy at.
Thank you for reading this, I know I probably shouldn't have accepted this koi considering I only have a 75 gallon available for him but my empathy for animals got the better of me and I felt like I had to do something.
Ad

You're kindhearted. I don't live anywhere near Arizona, but maybe someone will respond who does.

You are in luck! There is an outstanding water garden/pond organization in the Phoenix area. Here is the link
for The Greater Phoenix Pond Society: http://www.phoenixponds.com/archive/gppslinks.htm
also, there is an aquarium society: http://www.drywashaquarium.org/about.html that might be able to assist too. No doubt, they can help you. You are to be commended for rescuing the Koi. I would first contact the pond society to find a good temporary home for the fish. And, over the next few months, plan your future pond that will be a permanent home for fish. Feel free to ask questions here. There is lots of experience on this site and really nice people too. We look forward to hearing how it all works out. Oh, and welcome to the forum!
Stephen

So glad you took the fish home.

I ended up with 3 more yorkies than I planned on, in AZ, could not leave them once I saw the living conditions . Had a small herd of 5.

It was very nice of you to take the fish. I can't believe the owner would lie about what type of fish it was on Craig's list. He sounds way too irresponsible to take care of any pets.
F

Thank you all for the responses!! I'll be looking into those links when I get home tonight. Every single of you is making this weird experience a little better, I'll post pictures soon to keep you guys updated.
Ad

@fakieshulgin
You are very kindhearted and I sure hope that koi gets a nice place to live! We would love to see photos on where he finds his forever home.

It's always nice to read stories like this one, where someone goes out of their way to help an animal (fish)

Kind of you to help this fish. Hope he finds a good home soon. Best of luck.
F

He's been getting a lot better, not only is he eating normal but hes also been getting more and more active, my crawdad is terrified of him and now hides during the day like a normal crawdad. The koi seems much happier and healthier looking than the day I first got him. 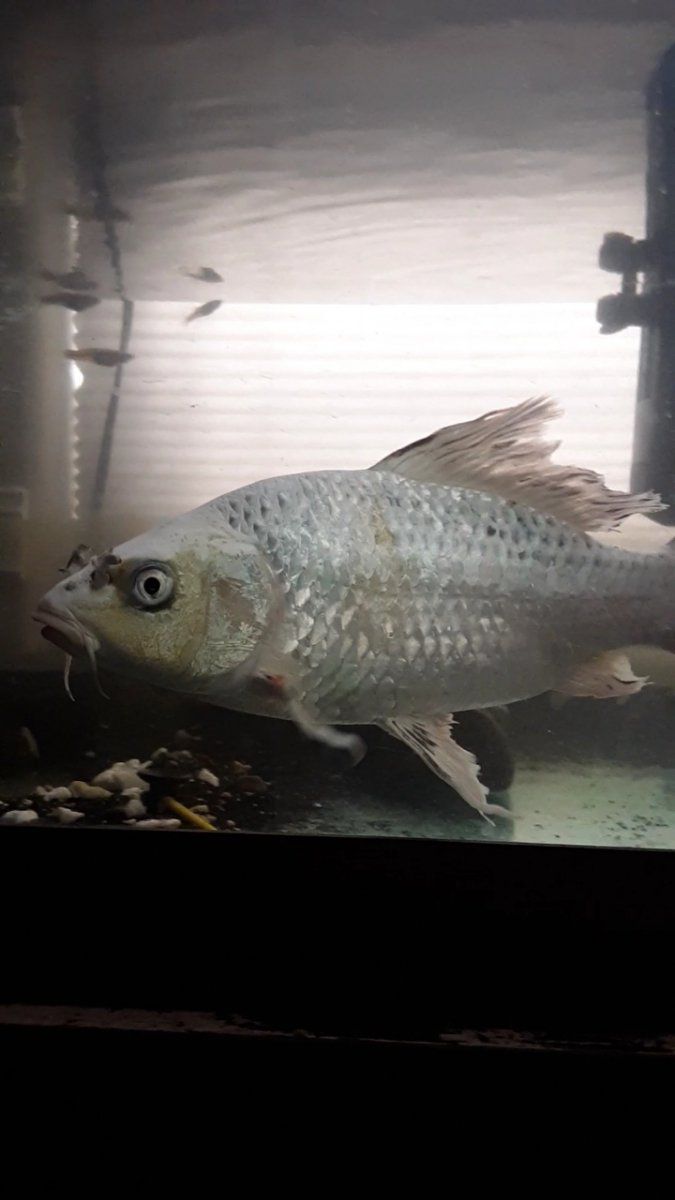 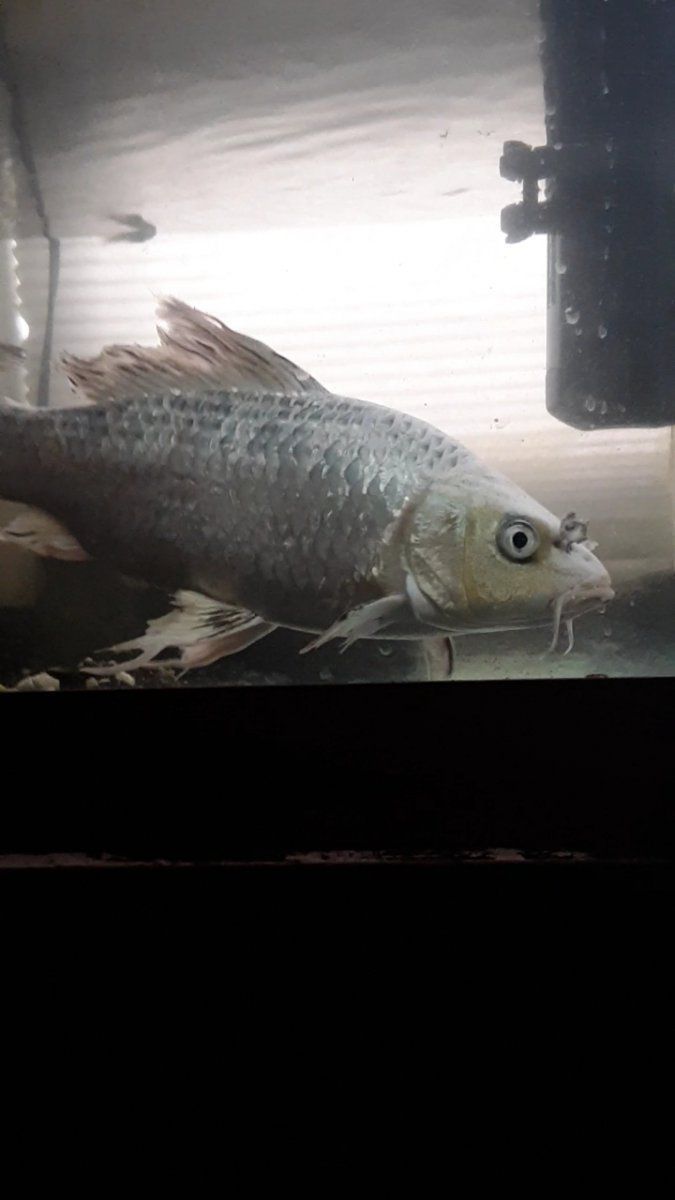 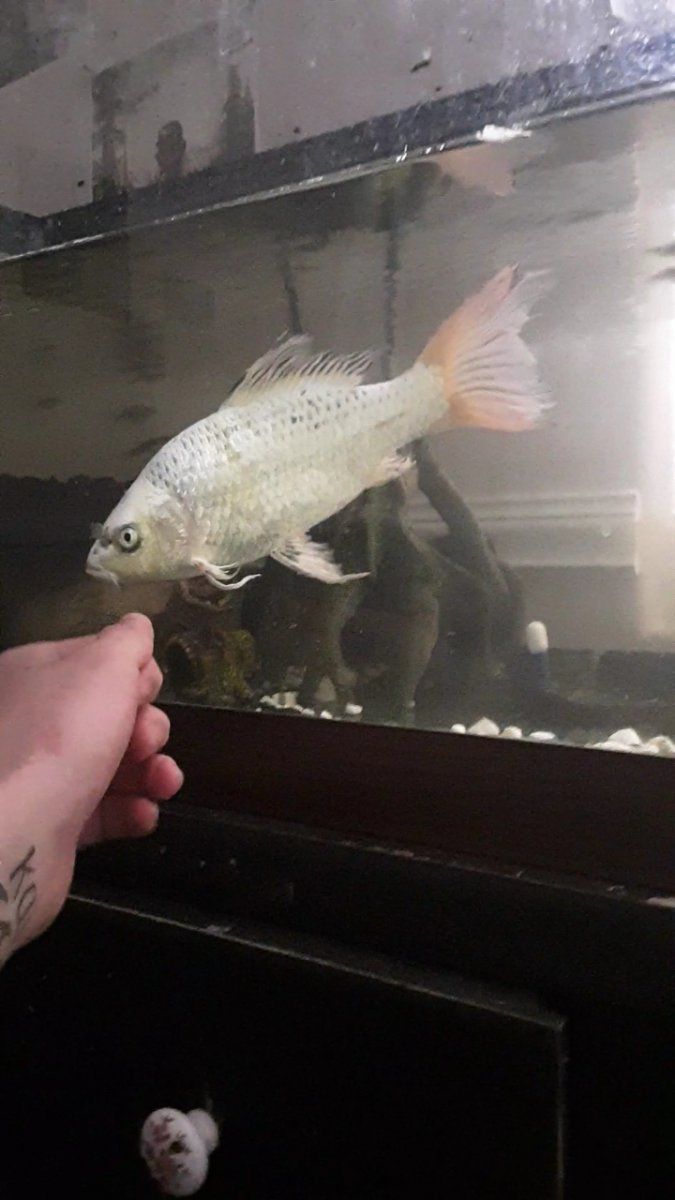 here are some screencaps from a video I took in the middle of a water change the day after I got him, that being the same Sunday I made this post. 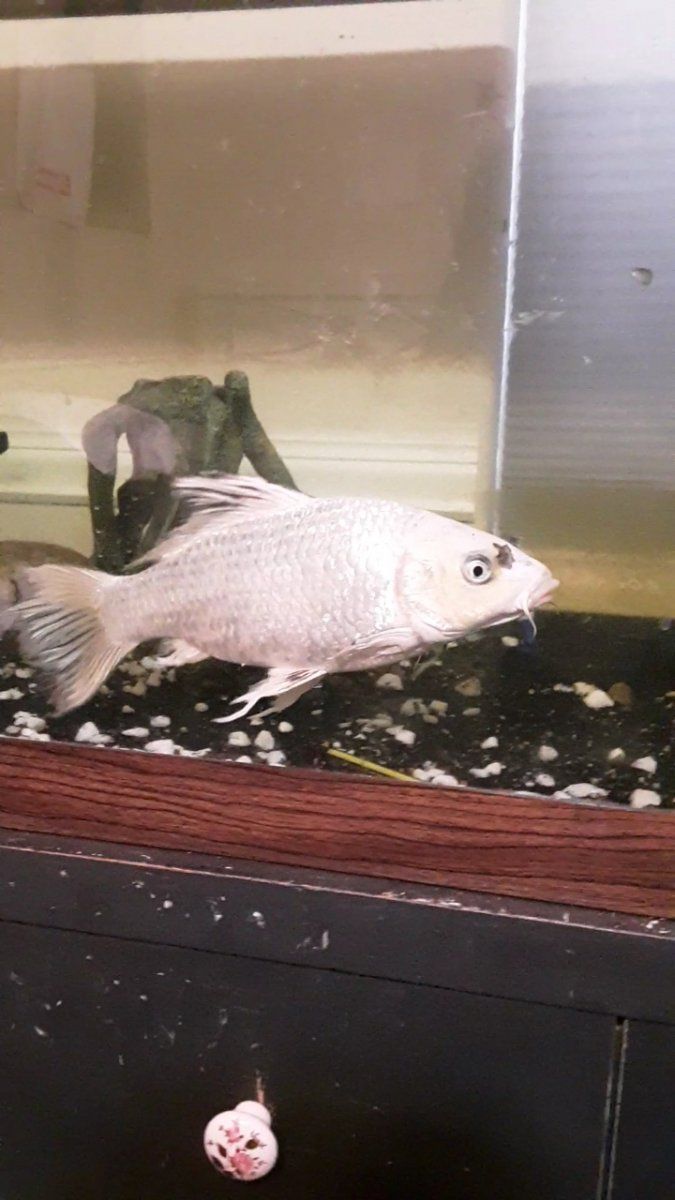 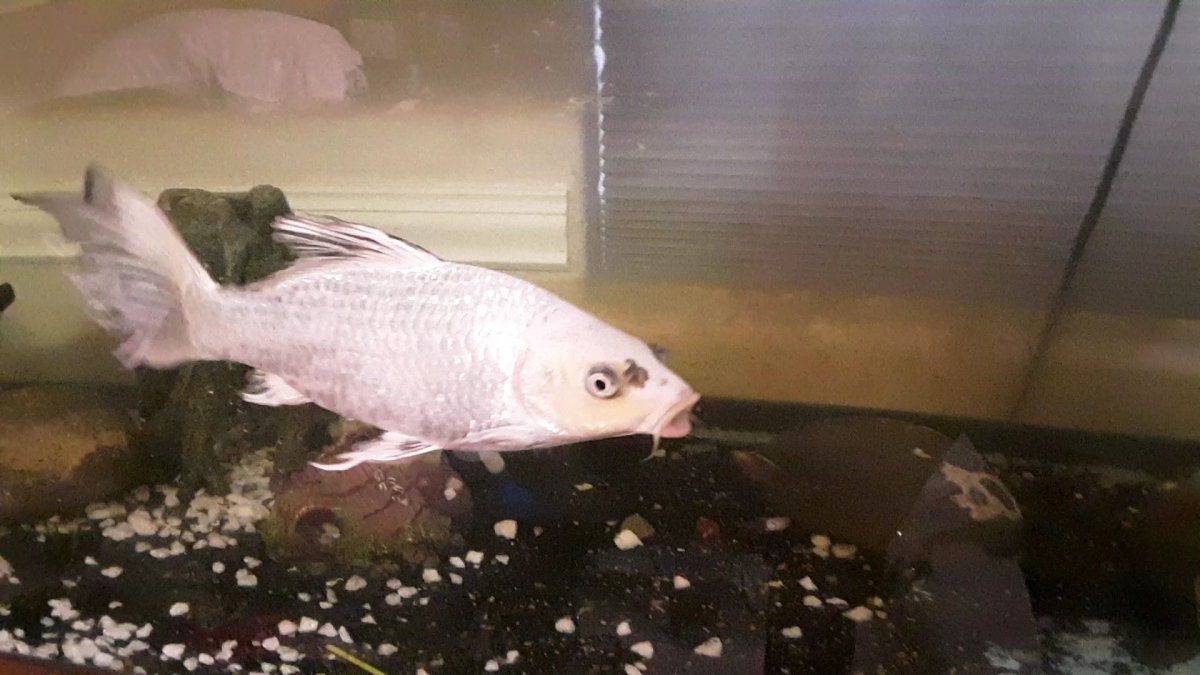 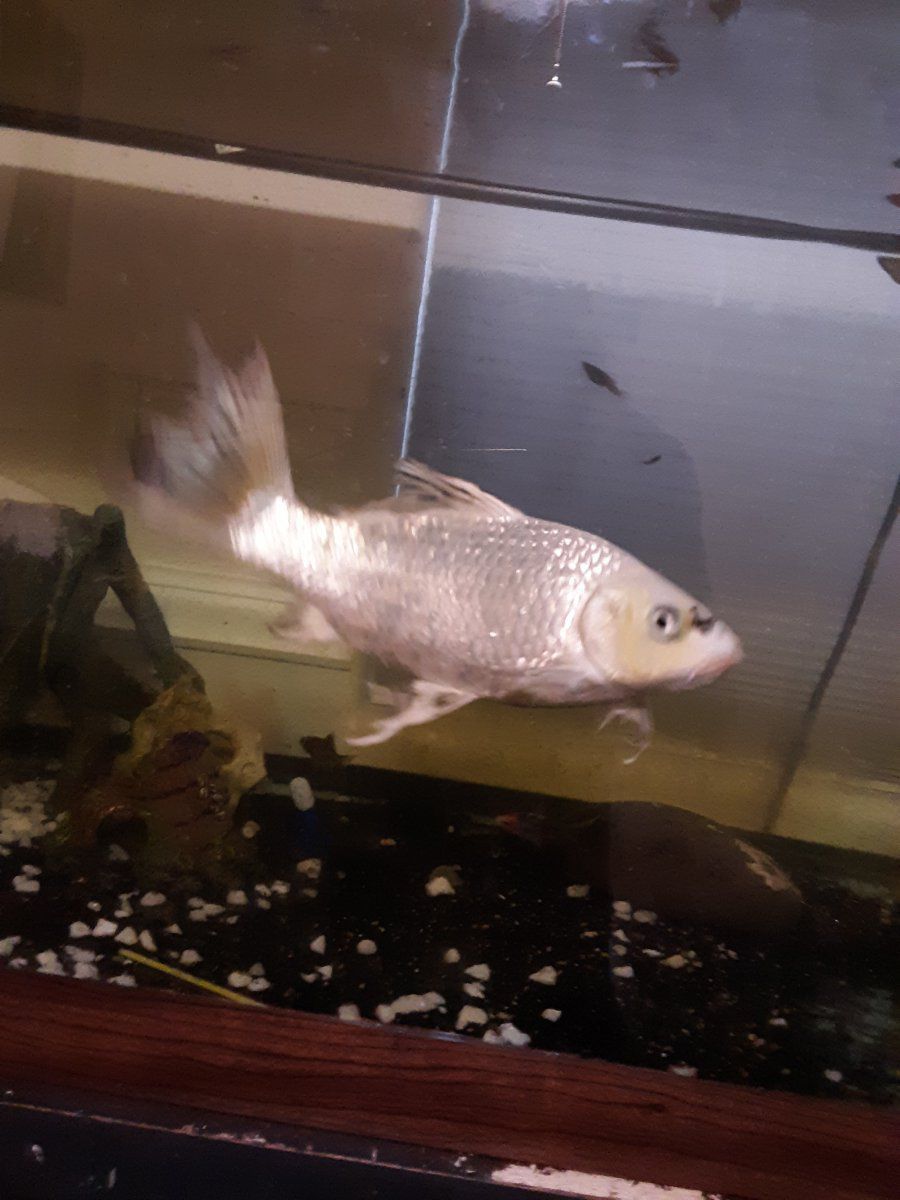 here are some screen caps from a video I took today after work, it could just be the lighting but I feel like his color has improved due to reduced stress and his fins ste definitely starting to heal. Also I apologize for the lack of quality in these pictures, as I have a pretty low-end phone and the only way to get quarter-decent photos of a moving subject is to take a video and screenshot whatever is kinda usable.

Before I go I have one question for you regular koi folk though, what are the build ups around his nostrils? I've seen many koi with this but I've never known if it was supposed to be benign or abnormal. If they are detrimental to his overall health is there anything I could do to help, or are these nostril build ups fairly common among koi?

That is perfectly normal. It really stands out when they are a different color than the koi but its normal.
Ad

Poor thing I hope he heals completely and finds a great home!