I have a small 300 gallon cement pond. Its biggest dimensions are 4.5 feet x 7 feet x 16 inches deep. It used to be a pondless rock water feature that came with the house. But the pump failed after 7 years and we had to take it apart to replace it.........so we enlarged it to an actual pond. ( I then learned about bog filters and will add one if I can figure out how and where. I have space limitations with the house, rock, path, plants) . The original rock with a hole is where the pump returns the water to. We had up to 6 toads visible at a time over the years in just the base of the rock feature.

After 2 blissful months with growing goldfish, several visible toads, and at least 13 young bullfrogs showing up after our first monsoon rain (I was planning to relocate most) , we had a raccoon attack that got most of the fish and frogs. I now have an ugly fence over the pond. And I am closer to building a bigger raccoon safer pond............It made me sad to see these old pics to post them. I knew each of the fish and they about doubled in the 2 happy months they were alive with me. I know it was a happy night for the raccoon and it is nature at work...............

My happy moment was seeing that the white baby fish survived, as well as the biggest shubunkin, and the dark colored shubunkin I named Flipper. I didn't see Flipper for 2 days and thought I was hallucinating when I saw the movement. I have only seen 2 frogs and no sign of the toads. But I heard them rustling under a bush.

If pics won't attach I can add them to comments. If they post out of orders the captions I made will make no sense. Here are my descriptions of the pics.

First pic was when the pond was first filled

Second were toad babies that hitched along with the plants. I think they all wandered off or were eaten.

Third is the original 10 fish

Toad and frog. Fish would swim right up to them to get flakes of food.

Frogs, algae, happy fish. Algae is normal at startup right? No I am not overfeeding my fish..........well maybe a little. They act hungry

Frogs out of water, hunting bugs

"white baby" is about 1 inch now. Striking black eyes and tail, only white baby seen in the hatchlings. It reminds me of the sunrise shubunkins............only baby seen since raccoon attack. I am hoping some of the dark ones survived and are just hiding. Zoom in to see spots and possible orange tinge starting. You can see the pics of possible parents.

Peace before the raccoon attack

Shredded algae and plants after raccoons..............no fish seen over a day they were so scared and hiding.

Fortification, a day too late. But secure now. The rocks are bigger than cantalopes and my shoulders hurt from moving them all. So far no evidence a raccoon has gotten in or tried to walk on it. Form over fashion. Photo taken at night when I finished it.

I knew we had raccoons and skunks and porcupines. But I thought the fish were safe since I built in hiding spots in a cinderblock tower holding the big rock up and covered with a flagstone, as well as some tunnels down low. The poor things got complacent with over 2 months of lazy swimming and feedings twice a day and may have not known to hide. The survivors know now and I hardly see them. I keep hoping maybe there are more survivors I just have not seen yet.

My plan is to not feed my fish much at all. I like watching them, so no feeding is hard for me since it draws them out. I am hoping that makes them more cautious about swimming to the surface where raccoon hands could possible still grab them.

I had a prior pond that was at the prior house when I moved in. It was more than twice as big and deeper and had steep sides. A disadvantage was that I never ever saw tiny babies. They would just show up as several inch fish. But, there was never such a noticeable raccoon attack. I may not have noticed if a single fish disappeared from time to time.

Thanks to online and forums like this I have learned so much since my little current pond was built in in June. I have pond envy, in a good way. It makes me happy to know all of you are out there enjoying your own ponds and learning from and helping others.

My little pond and little fish and frogs and toads and even the insects are my daily meditation. I look forward to going out with my coffee every am, and sitting with them later in the day.

My dog sits with me. It took over a month before he really noticed and started really watching the fish. It is comical as he watches and tilts his head at them now.

Peace and health to all!

Thank you for being such a friendly and welcoming community in these unsettling times. 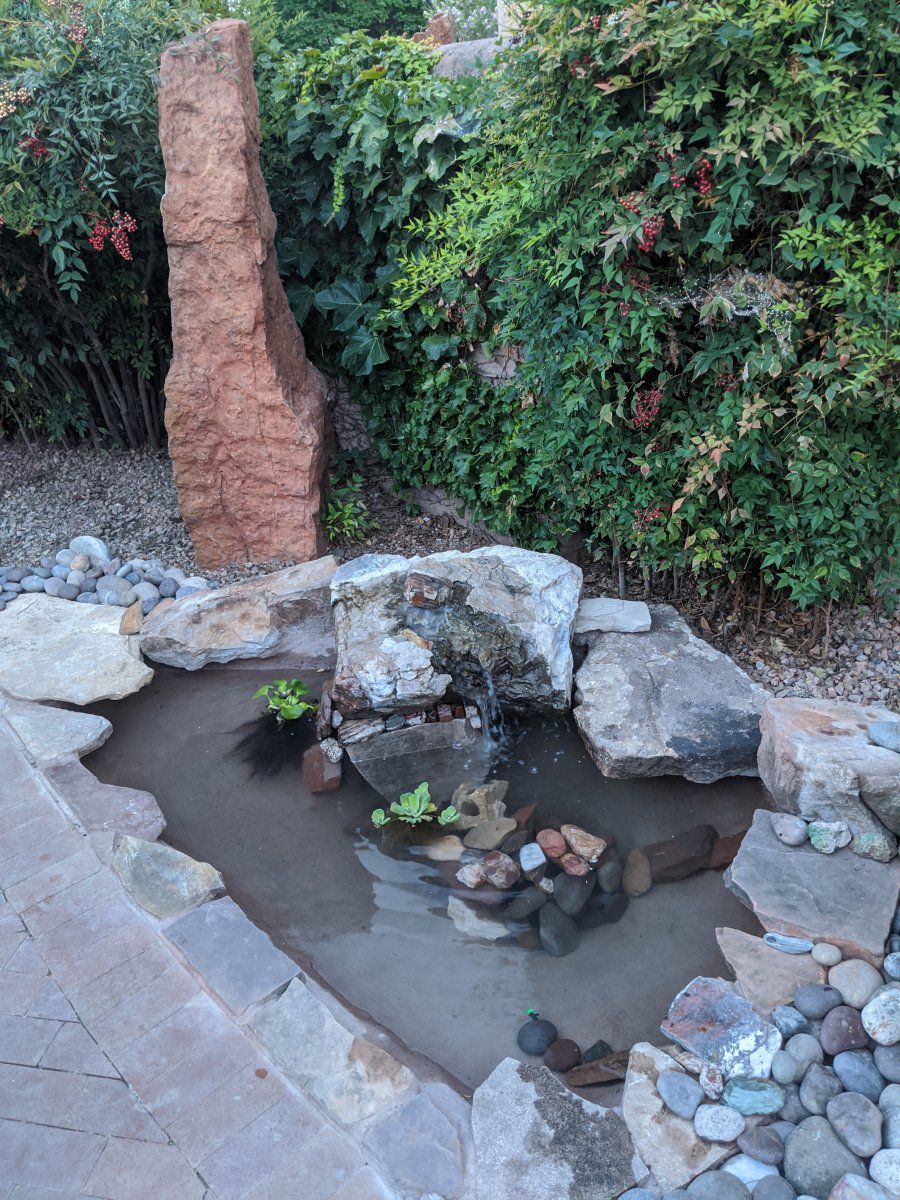 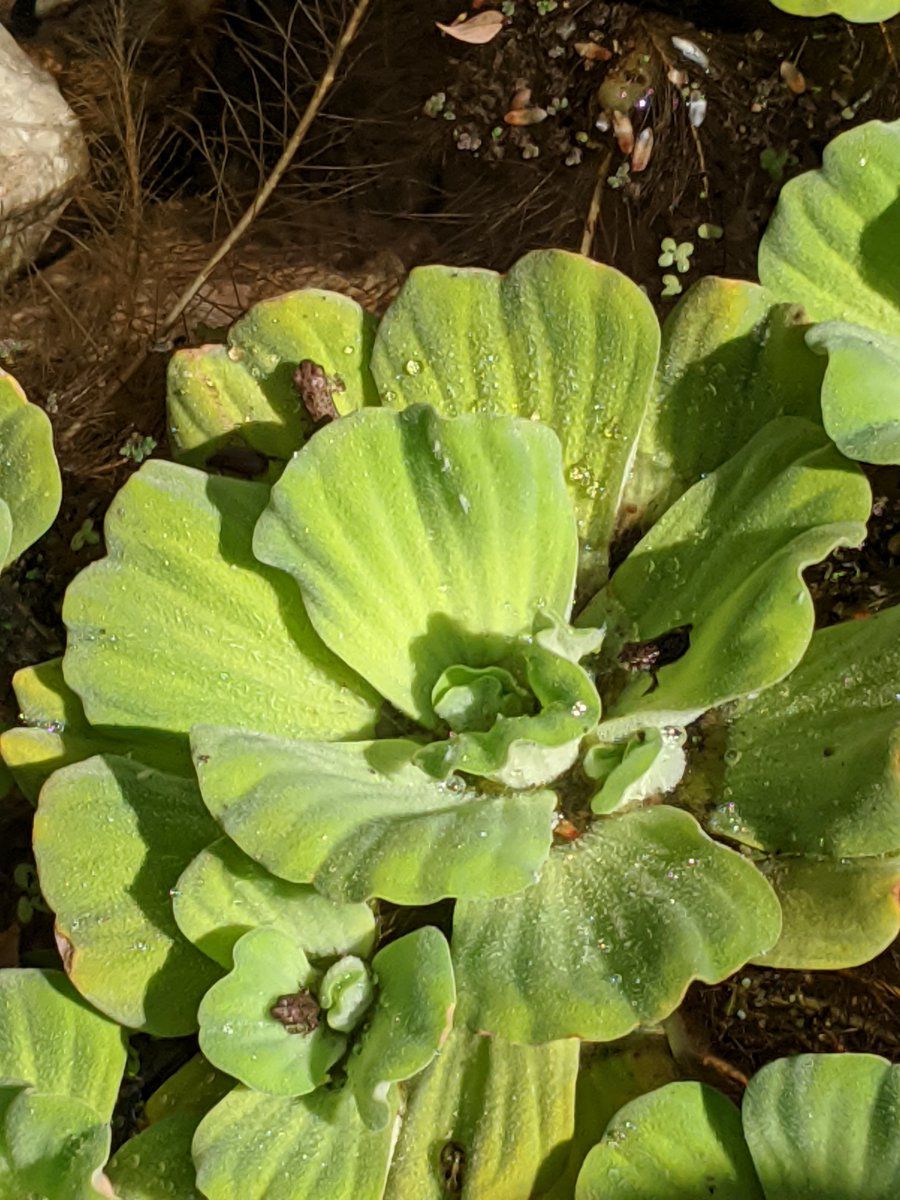 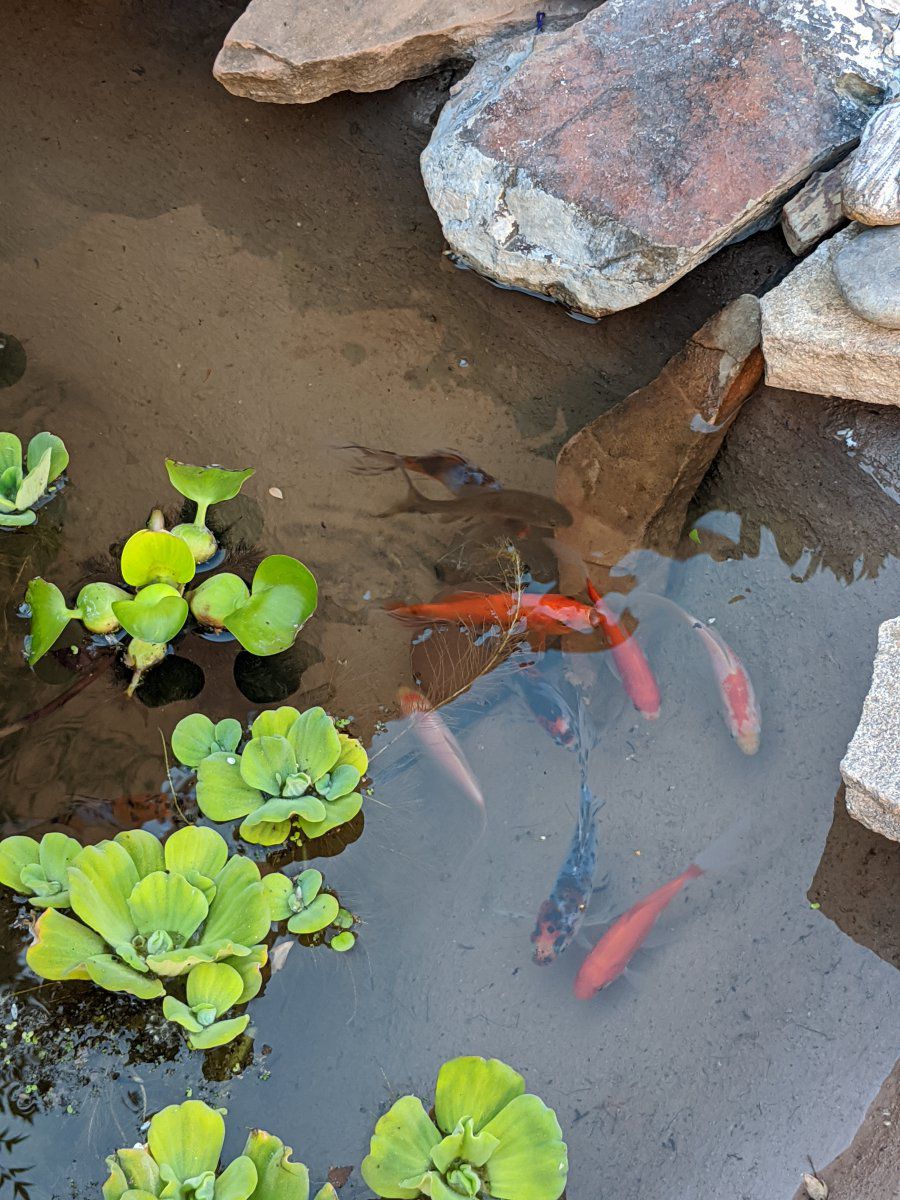 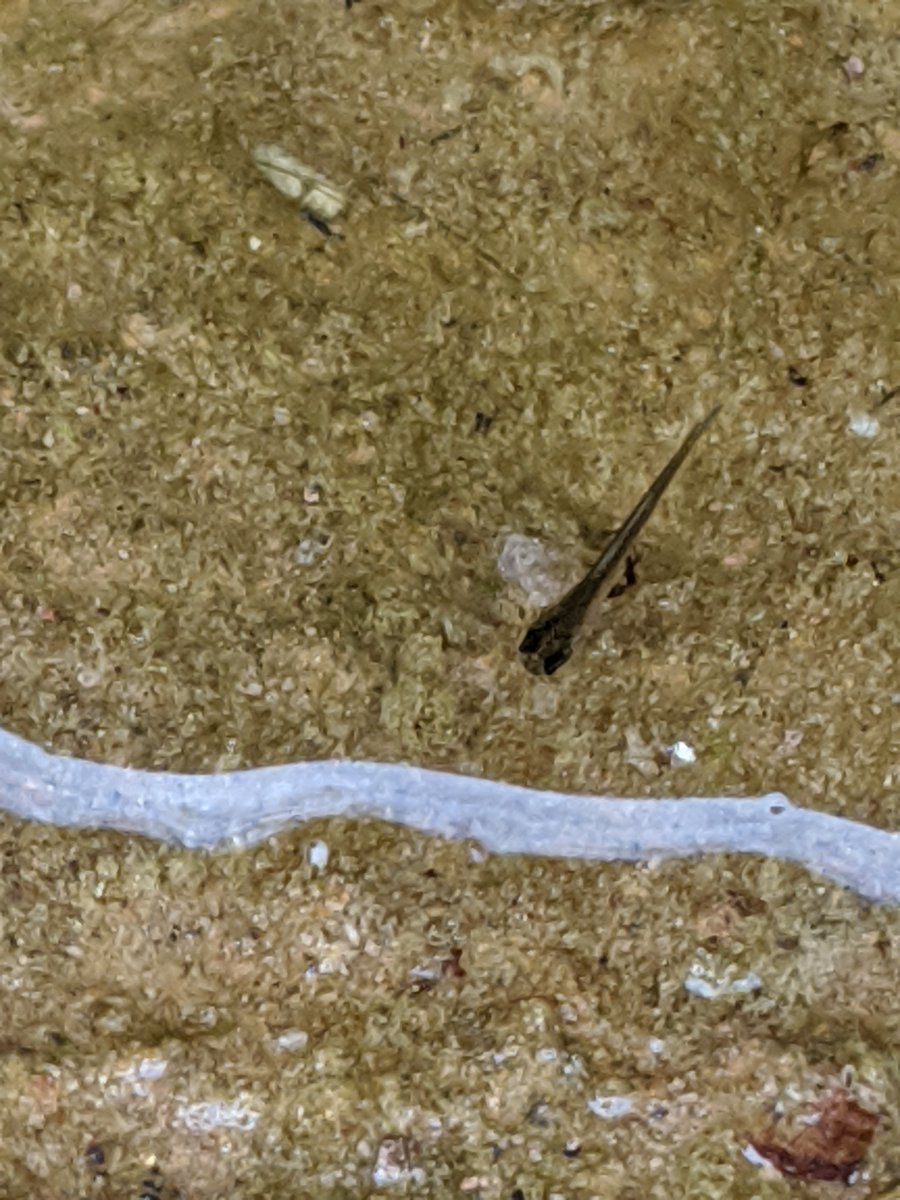 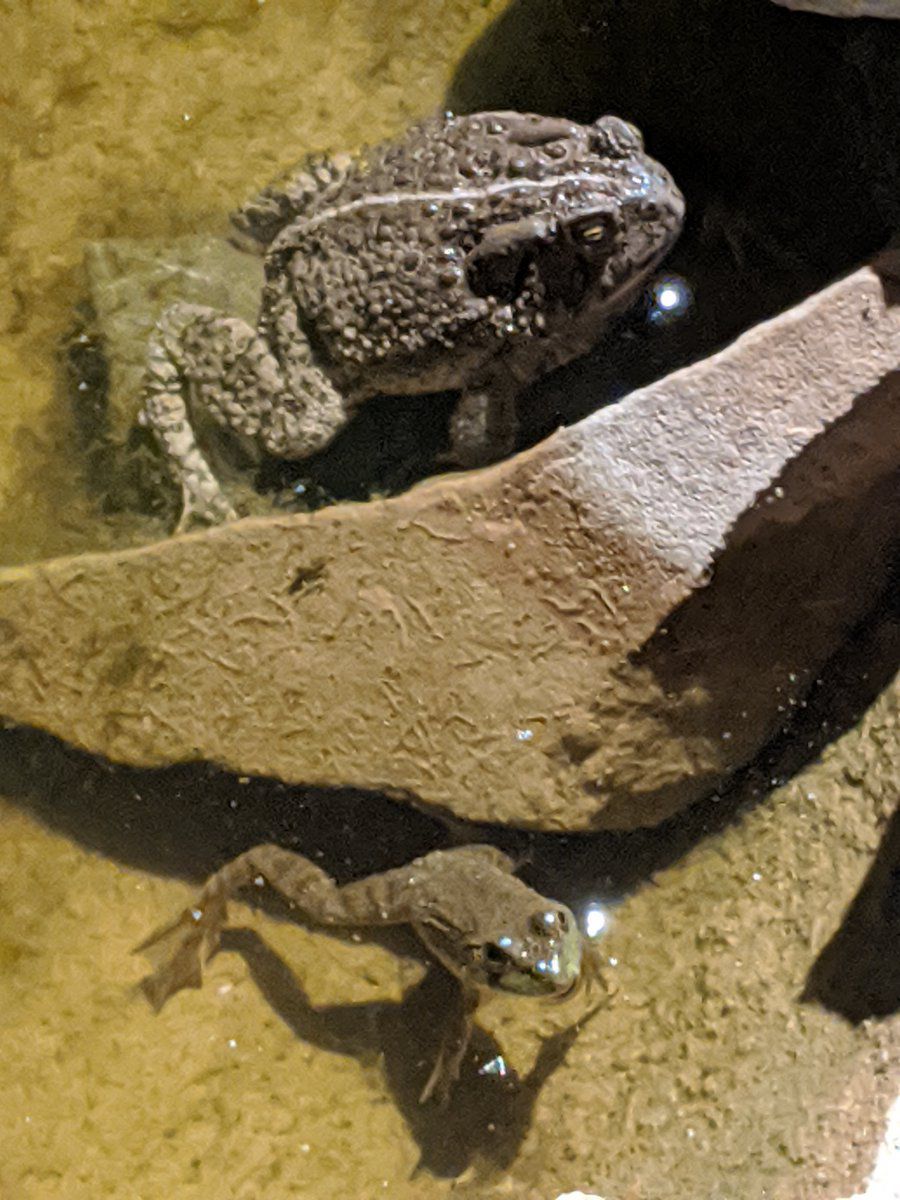 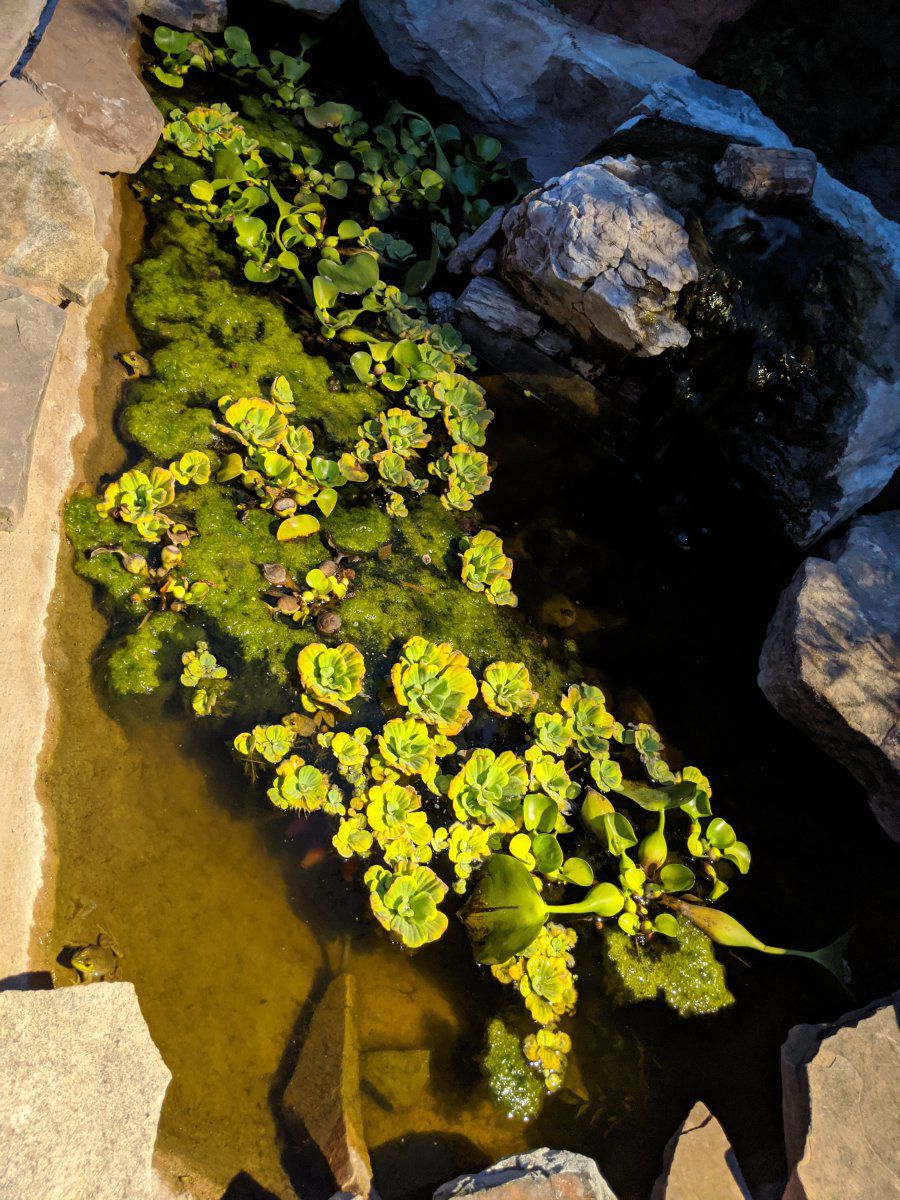 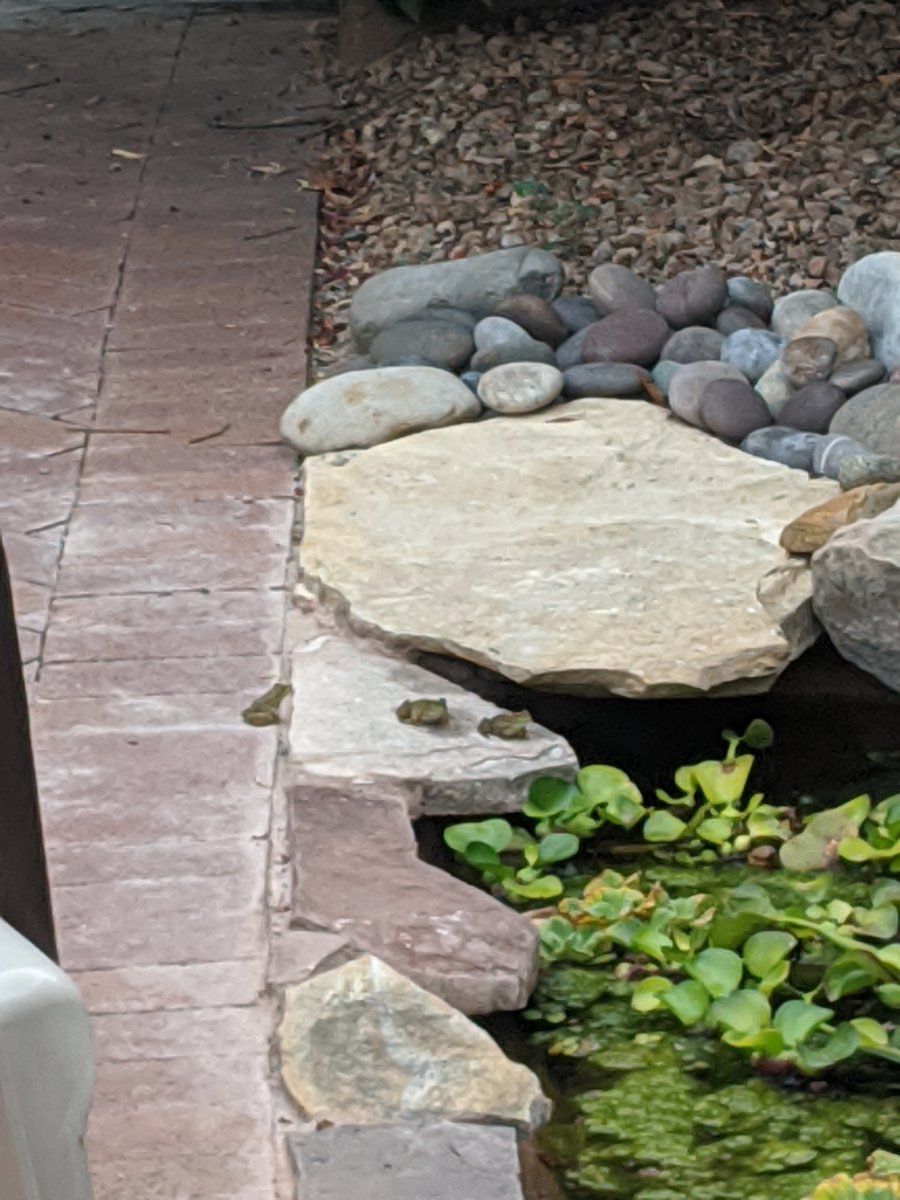 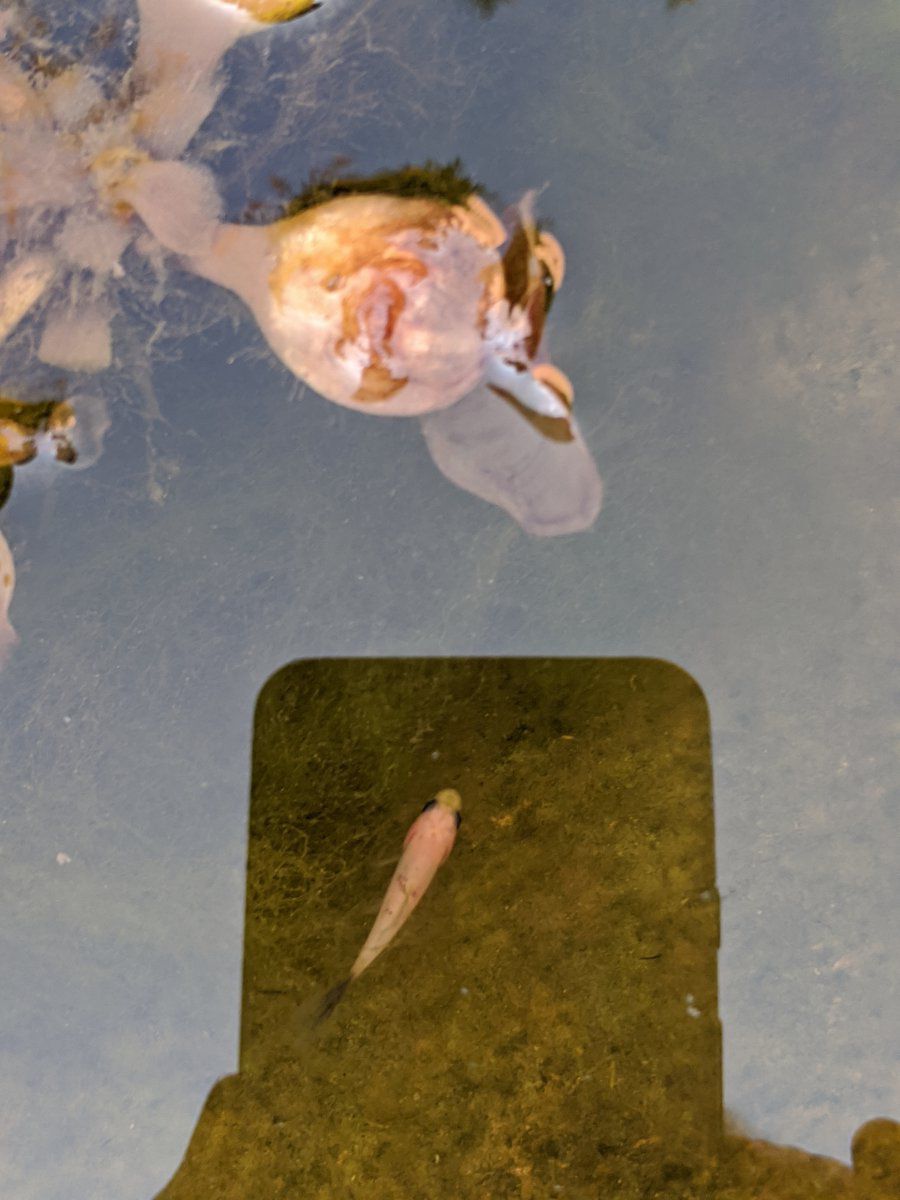 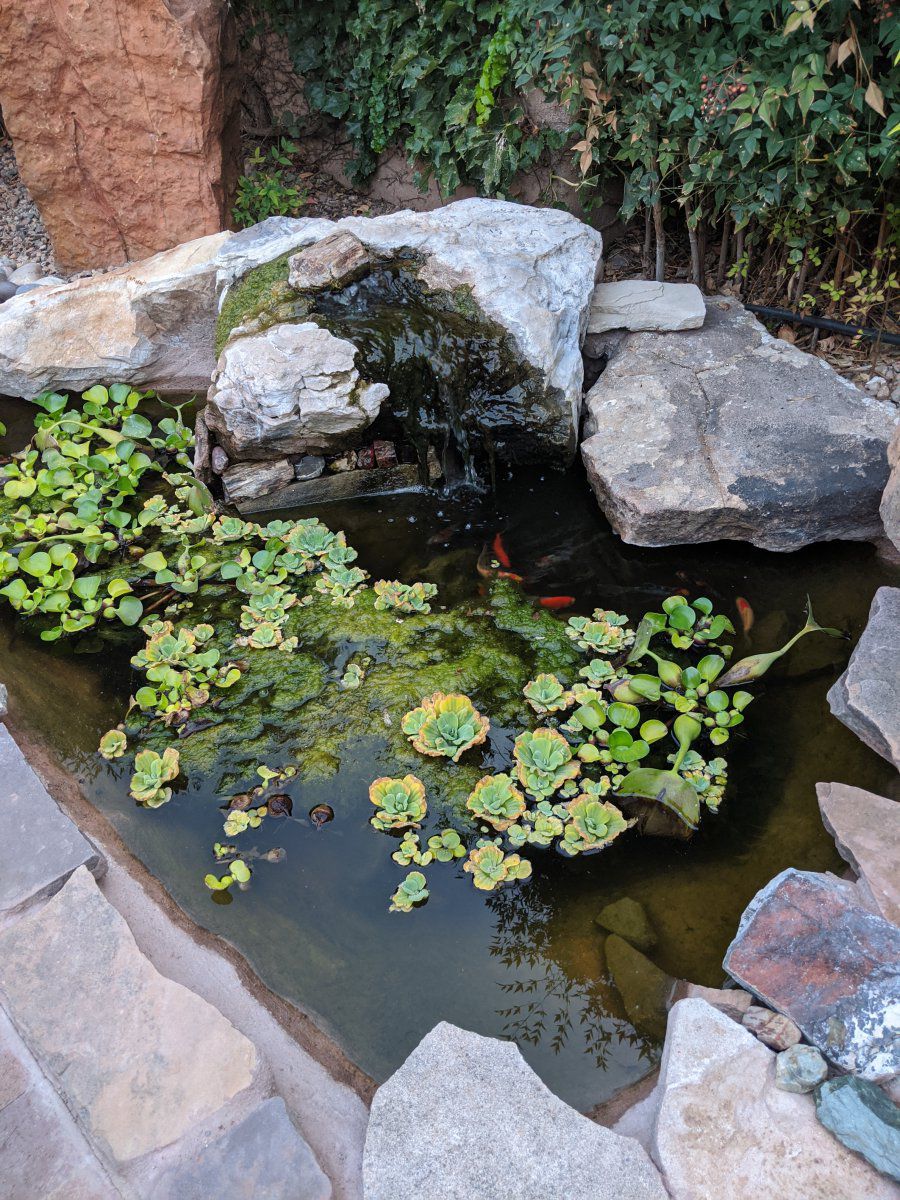 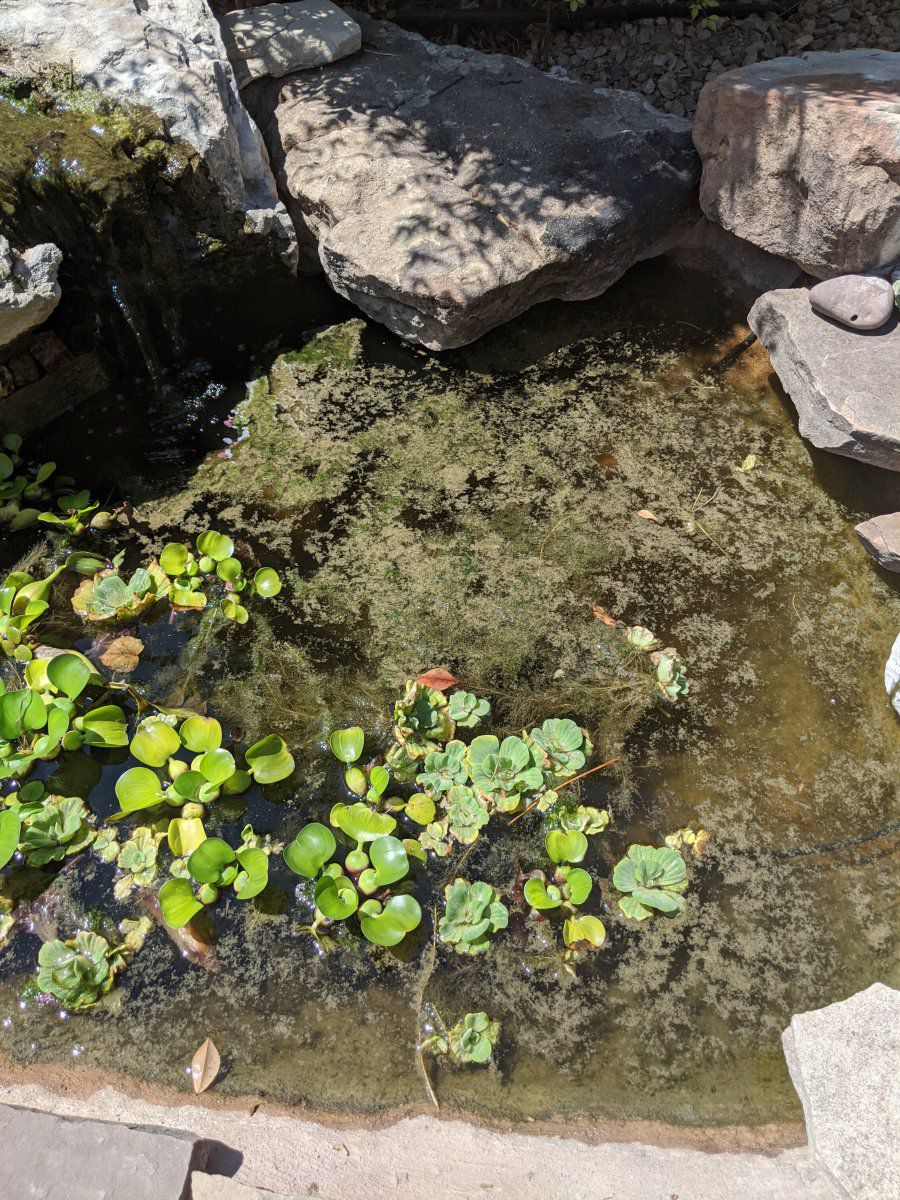 If you are thinking of going bigger, I’d do one side as a bog, then the other three sides straight down. Depending on which part of NM you are, you might go as deep as you can to give fish cooler water in high summer. And you could have a small shallow area outside the fence for wildlife to drink from. Just a few thoughts. Or if you don’t want to attract wildlife aside from bugs and amphibians, set up a water feature away from the pond for them to drink from.

What a cute pond! And I think your fence idea is great.

I had my first visit to the pond by a raccoon this year. (Well, I think it was a raccoon.) He stood on a plant shelf that wasn't too sturdy and dumped my plants into the pond. It took a couple of days for the water to clear for me to make sure he didn't get any fish. What surprised me is all I did was put a net over the one area he got into the pond, and it stopped him. I don't like to have the net over the pond, but when I am a couple of feet from the pond, it isn't really noticeable.

Hello and welcome! Glad to see your intro!

You’ll have to keep us updated on the raccoon situation. We are between ponds at the moment, but our new house has much more wildlife that the old house (yard is fenced but...). We know there are raccoons as we see scat periodically, as well as tracks.

addy1 said:
We have tons of raccoons but have never seen any pond damage from them
Click to expand...

we also have racoons, generally they are pretty okay, but last night they knocked over all the plant in the pond, and tumbled some rocks over, probably because the fish were out and grazing, so as long as the fish have places to hide racoons normally arent a big problem.

it seems they try to get the fish once, and if they fail, they leave it alone.
Ad

The fencing is still all secure. No evidence the raccoons have pulled at it or walked on it. The old fish and the new fish are all still skittish. Before the raccoons the 10 fish were so tame and came to the surface when I was there. I will eventually build a bigger pond. Thank you all for the welcomes and comments.

I made a little bog filter. I added more plants from my neighbor, mint and Yerba Mansa, since this pic was taken yesterday. I already am imagining ways to make the bog a little bigger or more secure. This is just a masonry tub and my own connection of plumbing and landscaping pipes and connectors to make it work. I may upgrade to a small sheep watering trough if this one doesn't last. They are shorter stock tanks. The water is already noticeably more clear after 1 day. Does this mean I can get more goldfish? I have 15 in about 300 gallons.

Much as you may want to, no. They are small now, but adult goldfish get to be big, and a high waste producers. A rule of thumb is 60 gallons each, so 60x15=900, but with the bog, you can get away with a few extra fish, not to mention they aren’t full size yet. Besides, they will produce babies. Even sometimes before they are full grown. im attaching a picture of my full grown pic in a holding tank, that was a few years back before he passed away. Comets, common, and shubinkin get to be around a foot long nose to beginning of tail fins, and too many will produce a lot of waste.

Interesting. The owner of the water garden store said 10 gallons per goldfish. I suppose it does depend on so many factors. Your number sounds more realistic. Water clarity is noticeably better 48 hours into having a bog, with the plants in less time than that. I still need to see how this entire set up survives winter. My plan is to keep it all running. Of at least 100 fry, I only see one survivor swimming with the big fish. I do wonder if more are hiding in the plants.
Ad