So this happened last week. And it turns out he's not all that friendly or cooperative. Most bears around here will leave when humans direct them too. Clearly this guy knows there's dinner below the surface. Anyway, the net saved me this time. But now he's been back at least twice and "rearranged" the net for me.

This is the first time in 6 years I've had this much of a problem with a bear. Haven't lost a fish since the beginning, but this guy seems pretty determined. Anybody got thoughts on other defensive measures? And please know we can't shoot them around here,

Well it was enjoying the drink it was getting!

For our bees, if a bear came to visit, we would need to install electric fencing with bacon on the wires to make the shock hit their mouth. For a pond no clue.

Thanks for that. Good idea. At least during the winter when they're probably looking for new food sources.

So far I think he just paws at the net because he/she is worried about getting caught in it should he enter the pond. Smart bear...

Definitely electricity to ward off that bear but maybe he won't enter ever cuz of the net. I wouldn't take any chances tho as he could really mess up your pond big time!

and here we are complaining about a bird and raccoons ,geese.Aren't we a shallow bunch

Well, he certainly is gorgeous but I can understand wanting to discourage these visits !
Ad

Oh my gosh! And I'm stressing about a Heron!

People use sprinklers with motion detectors to keep away hearings. Maybe a sprinkler with the motion detector bear walks up and gets smashed in the face with some water might run away

Scarecrow motion sprinkler only works when weather is not freezing tho so have to turn it off or it will freeze.

Sorry for your concern, but that is awesome. Gorgeous bear.

mrtrumpet said:
So this happened last week. And it turns out he's not all that friendly or cooperative. Most bears around here will leave when humans direct them too. Clearly this guy knows there's dinner below the surface. Anyway, the net saved me this time. But now he's been back at least twice and "rearranged" the net for me.

This is the first time in 6 years I've had this much of a problem with a bear. Haven't lost a fish since the beginning, but this guy seems pretty determined. Anybody got thoughts on other defensive measures? And please know we can't shoot them around here,

As much as i love bears . Thats getting too close and personal . One sure way to keep him /her away would be to drop some firecrackers down next to them . i guarantee you won't see them for a few days be diligent and keep an eye out for them and get them again and they will avoid your property at least they will resort to you last.
Unfortunately a bears coat is so thick i doubt an electric fence will do much of anything unless they stick there nose on it . An other option is those scarecrows. Or you could even try something as simple as a motion sensor with a light.

i'd be at war with myself to allow the bear to hang around. where i would love for him to be around. if it came to be a mom and brought cubs by i'd almost sacrifice the fish. but my family would win out in the end and i'd have to chase them away.
Last edited: Jan 4, 2020
Ad

We had one bear here and she was caught and they could not find her cubs .I found them in my apple tree and called them to pick them up .They caught momma on highway 58 and were announcing on the local warning channel that they were looking for her cubs and where to call if you spotted them .Mom and babies were reunited and relocated

You could try to contact your state agency for wildlife management in your area and let them know about the bear's multiple visits. If the bear is, or becomes, especially bold or shows aggressive behavior, wildlife management will probably kill it. They probably won't trap the bear and relocate it because its a lot of effort. But they can direct you of the best ways to avoid human - bear conflict. Like not putting out bird feeders, securing your trash, cleaning and/or locking up any outdoor grills, and not feeding pets outdoors, etc. If you have any neighbors nearby it wouldn't hurt to let them know of the bear being in the area so they can also bear proof their homes/yards.

Electric bear fence is available on the market -- and it does work when installed properly.
Last edited: Jan 6, 2020

Don't think motion sensor lights would work. We installed them the deter deer. The deer appreciate the lights to graze by!

Lights and sprinklers aren't going to work. Being that this is a black bear located in the south east U.S. -- SAFE hazing with noise can be helpful as long as you can do it from someplace safe and secure, and the method of noise making isn't hazardous to the bear or people and structures that may be nearby (ie. no fireworks or live ammo gunfire). Yell, bang pots/pans, bang metal trash can lids, etc.

As mentioned in my previous post, electric bear fence does work when installed correctly. But hopefully you won't have to resort to that, as electric fencing brings its own group of problems...like making sure to keep the wires clear of growing vegetation, posting warnings that an electric fence is in use, making sure it is properly grounded with lightening arrester installed, and its also not very pretty...
Last edited: Jan 6, 2020

Fire works are legal today due to pests. They started with lower class fireworks to scare wood chucks etc. And a simple handful dropped out the window in your back yard is one way to say to the bear your home is not a nice quiet meal, and they will listen. A simple motion sensor will let you know they are back. It would take allot more then them coming in the yard for me to call some bureaucrat who will just put the animal down. The Big no no with black bear is to corner them NEVER Block there exit. 99% of the time if you give them a way out they will leave without any problems. And the Mother bear with the babies she just wants to find food for the kids and keep them safe like any good mom. A first time mom when she has her first child and the relatives come over and someone has the sniffles you can be sure they won't get near the baby. By the time mom is on her third baby and someone wants to see the baby mom is like yeah sure just don't hurt the kid or i'll rip your head off. One theory you never want to try but it explains why some mother bears bring there kids close to people and others are very posturous when they see you close to the cubs.
Ad

Id be getting a dog to let me know when the bear is around, and keeping a stash of bottle rockets to scare it off. Then if that didn’t work, I’d consider calling fish and game. Not too impressed with most of them, the guys in Arkansas refused to believe multiple folks reporting cougars, till a guy caught video on his deep cam they couldn’t deny.

Here in this area of the south east (western N.C., east T.N., and north GA), there is a high density of black bears. Wildlife agencies in this area are well aware of the bear density and its proximity to human settlement and activity, and the impact on both. These agencies are staffed with biologists and folks educated in the task of conservation and public safety, they are not the boogie man. The last thing they want to do is kill a bear, but unfortunately, if a bear shows bold and aggressive behavior, they will have no choice for the sake of public safety.

Relocating “problem” bears isn’t an effective solution, as bears that have habituated to human food & activity will not “unlearn” their behavior, and will often return to the exact same areas.

Wildlife agencies will not send out officers for every phone call they get of a mere bear sighting. However, they are more than happy to point the public to resources to educate them on how to avoid human/bear conflicts. This is why calling your local agency, that is most familiar with the wildlife of that specific area, is a good idea. It is a much better way to become educated than a google search or listening to your neighbor’s old wives tales.

I’m personally involved in helping educate outdoor enthusiasts in bear and wildlife safety and responsibility. The biggest part of that education is how to AVOID a problem to begin with, by altering our behavior when we set foot into the wild. Likewise, we need to modify our behavior when wildlife sets foot into our backyards.

Hopefully, the bear visiting the O.P. is just interested in getting a drink now and then. Hopefully, it will eventually move on. One of the best ways to make sure this bear doesn’t become habituated is to remove all temptations that could spell disaster for the bear or people nearby.

Your visitor has a magnificent coat. After dogs and fish i think i lov bears next. i found these little guys on the edge of the row. Mom was uneasy so we did not get any closer then when we found them. unfortunately this was the best i could get through the trees 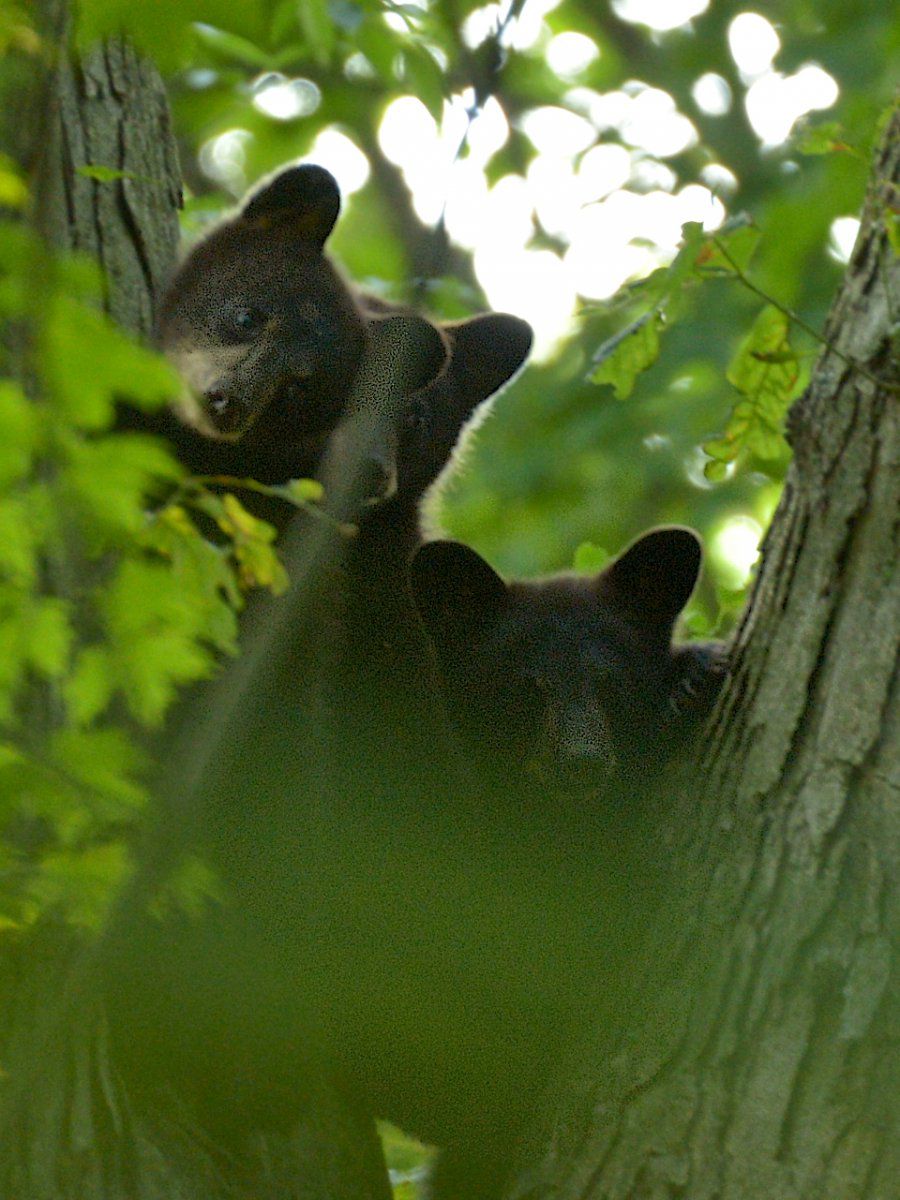 aww cuties! I like bears, but hope they never visit our bee hives.
You must log in or register to reply here.