Good Plants or Bushes to plant behind Pond along fence?

What are good Plants or Bushes to plant behind my Pond on each side to plant along the fence? I want something that is low maintenance and nothing that will shed into the pond, any thoughts? I LOVE cat tails but I don't know if I would do the entire area with cat tails or mix in some shrubbery.

You have soooo many options ... I'd suggest you take a walk through a nursery to see what types of plants you like ... then come back here with your list, and ask the same question again. I'm thinking a red threadleaf maple, golden mop cypress and/or a variegated euonymus, maybe a couple of heaths, and barberry (if not on the illegal list there) and then mixes of flowers like lilies and iris in specific clumps ... maybe some grape hyacinths ... a similar mix would give you three seasons of interest.

Whatever growing plant you try is going to either shed foliage through the year, or seasonally in Autumn, or is likely to spread bits when you trim it.

You might try checking out your local nursery to see what grows in your climate, consider evergreen foliage shrubs, or a trellis to train attractive climbing plants...
S

I would advise against any trees or shrubs, since they will drop leaves into the pond. Do leave a broad path all the way around the pond. Vines on the fence are nice.

A good way to find easy care plants is to go to an old neighborhood and walk the streets looking for plants you like. I say an old neighborhood, because that's where you will find plants that have been thriving for decades. When you see something you like, go right up to the door and ask what that plant is and where you can buy it. In most cases, you will be offered plants free, so have some bags and a shovel in the car, LOL.

shakaho said:
I would advise against any trees or shrubs, since they will drop leaves into the pond. Do leave a broad path all the way around the pond. Vines on the fence are nice.
Click to expand...

I'd like to leave a walk way closest to the Pond and use landscaping pavers so I can get to and from the filters and waterfall easily, so that should help Some but agree I don't want any leaves falling in my Pond and want easy maintenance

All of the above advice sounds good. You also need to think about what kind of sun exposure that area gets, as well as the condition of the soil [ie, cattails like marshy soil]. As to the plants themselves, some are hardy & trouble-free, but there are those high-maintenance ones that might require spraying for pests, fungi, etc. I would think about that. Since I've been a "ponder," [as well as with my turtle habitat], have had to re-think many plants that normally I wouldn't have given a 2nd thought to having.

I was going to suggest Ligustrum shrubs, but right now ours are dropping their teeny little flowers everywhere. They're nice, can be controlled easily, aren't messy (except the flowers), are hardy, and are evergreens.
Ad

you will need plants that don't shed alot and plants that can stand your winters and that would be best left to a local nursery .Remember if you get something that flowers factor in bees if any one is allergic to bee stings

Thinking even of a wall of 5 foot evergreens, that would create a bit of privacy and act as a nice backdrop.
How many would I ned for each 15 foot side? 5 to the Left and 5 to the Right?

blue spruce would be pretty but you have to factor in ants as it seems all pines attract ants .I had pines here and I would mow by them and get several ant bites on me

Blue spruce grow slowwwwwwwwwww but so pretty. There are some neat ever greens that grow fast and look great all year. Check red tip potina (sp) need to look it up, just love that bush, ever green, no shedding, beautiful red leaves in the spring, new growth is red. 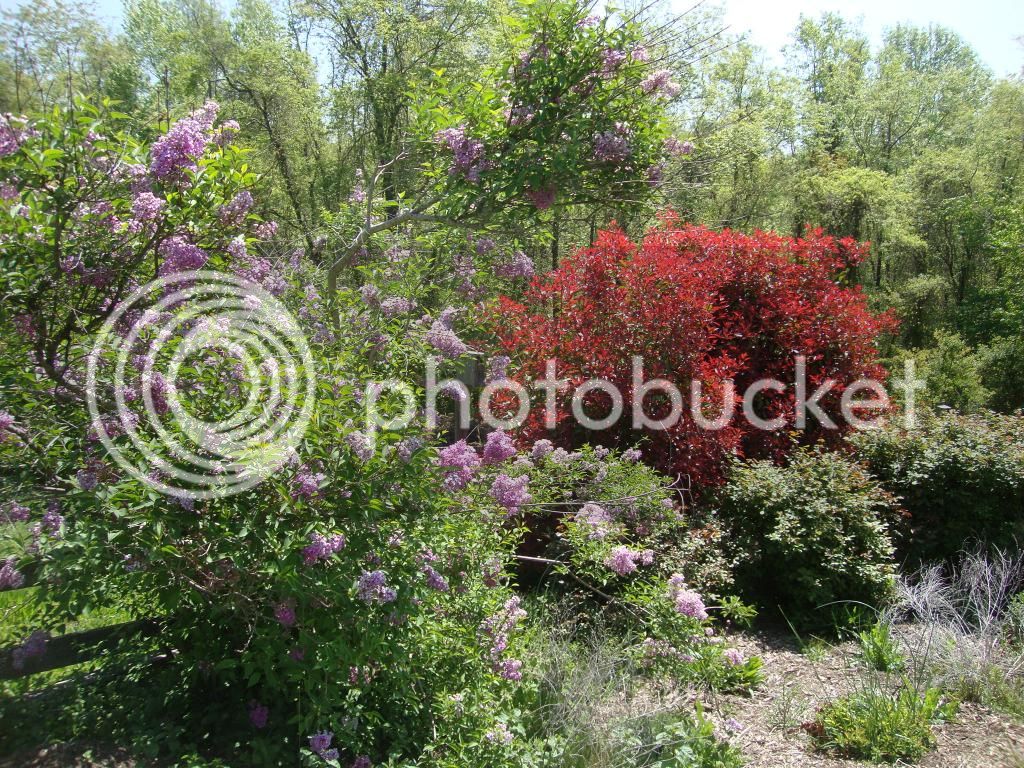 Any more pics of a similar tree or bush layout acting as a privacy fence?
Ad

Here is some information about the red tip photinia, it makes a great privacy screen, very pretty all of the time. Survives fine here, we have dipped below zero a few times since I planted it The two in that picture I just let grow, no grooming.

We are zone 6b-7 somewhere in that range, depends on the winter. The Deer trim one of our plants, it is denser than the ones the deer leave alone. The one is planted right in their entry to the yard path. Right now the leaves are a beautiful red, there are red leaves most of the year, keeps its leaves year round, no leaf dump.

Just had our back yard re-landscaped. Here's a link. I can provide additional pond area closeups if you want. Also have plant names. Forgot to mention that the bushes are young have have plenty of growing to do. The bushes behind the pond will grow to about 5-6 feet.

shanezam203 said:
Any more pics of a similar tree or bush layout acting as a privacy fence?
Click to expand...

This variety is too big for your area, but this is our "green fence" ... These are American Black Arborvitis (get 30' tall, but once they grow a bit more, ours will be topped for a hedge look). To the left, the tall skinny upright bushes are "Emerald Arborvitis" and those would work. You wouldnt want anything like a Leeland Cypress, as those are really fast growers. Do you want "green", a variegated green/yellow, or something more colorful?