I posted this in the member introductions a few days ago:

I just bought a house, and one of the things that came with it is a fairly nice thousand gallon pond in the backyard. The house and pond have been neglected for over a couple of years. The filter pump went out about a year or so and the water looks like green soup. I was considering ripping it all out and planting bushes, but I found about eight goldfish in that water that have somehow survived in that mess. I've changed my mind, and I am going to try to restore it.

I have been voraciously reading about ponds and fish and here is what I can report so far.

The pond has a very nice waterfall feature and a Pondmaster PUV 4000 filter. Only a couple of plants though.

Actually, since I bought the house, I bought a pond vacuum and cleaned out most of the crud in the bottom. I bought a set of waders and pulled the pump out of the bottom of the pond. It was kaput. Strange, but it was a 4800 GPH pump, a bit more than the capacity of the filter. (The head is only a couple of feet.) I replaced the dud pump with a 4000 GPH pump, and got the filter and waterfall working. It's been running for about a week and the water has cleared up nicely. Here is the results so far. There were a couple of aerators also in it, which I haven't tried to use yet. (I'm guessing that the waterfall aerates the pond fine???) 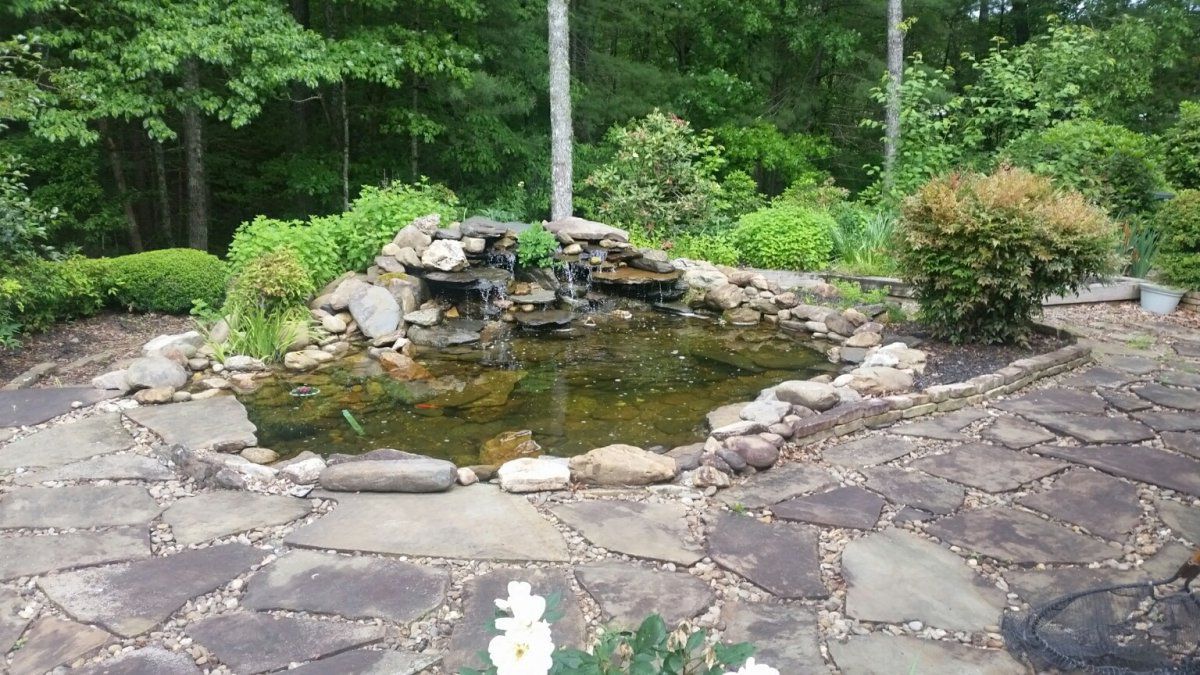 I bought a water test kit, and have confirmed that the water is essentially free of ammonia, nitrites, and nitrates, < 25ppm. If I'm guessing right, that filter and pump are more than adequate to keep it that way.

What I found strange though is that the pH is hovering around 8.5. kH is less than 58ppm.

I have added nothing to the pond except 500 gallons of city water treated with API tap water conditioner. (I had to pump the water level down to get to the pump.) Municipal water here does have a pH of about 8.3 and kH of < 58ppm.

I have not fed the fish anything but an occasional pinch of dry goldfish food.

Anything else I need to look at?
Ad

Our well water is very soft and acidic. I had to add crushed oyster shells for about 4ish years to pull it up. Now it sits around 100 with ph around 7.6. It stabilized after the pond aged.

My pond water is always around 9 in ph and crushed oyster shells keep it stable .The pond looks great and aeration never hurt a pond and extra just helps the pond more .I have just over 5000 gallon pond and 12 air stones and my filters each have an air stone in it .Plus my water fall and spitters help also .

clark kent said:
Only a couple of plants though.
Click to expand...

I'd definitely add more plants. They do a lot of good in terms of using up excess nutrients, as well as helping to shade the pond from the hot sun. Highly recommend going with as many native species as possible.

agreed to plants in the pond something that grows fast and is easy to pull out when it grows like water cress which you can get in the grocery store.
thats plenty of o2 for 4 gold fish

Nice pond!
Do yourself a favor and tie a thin rope to your pump and anchor the other end to something on the shore. I wrap mine around a heavy rock. This way it's easy to retrieve the pump when needed.
Ad

Thanks for the rope suggestion, but the pump, power cord, and hose are covered by several large rocks to hide them from view. I kinda like that, but it does mean that I have to pull the water level down some and wade into the pond to get to the pump. I guess I can live with that.