Now it's time for further explanation...... This is Louisiana...... Yep! Temps. nearing triple-digits. And no relief from the humidity.

My almost 3000 gal pond gets almost full sun -- there are a few times during the day where one end or the other has shade for a few hours. There used to be 2 trees that helped with shade, but they were dying, so had them removed last fall.

Been watching my water temp. Normally it will stay around 84-ish during the heat of summer. I have a 3600 gal pump going to the turtle bog and the skippy. There are 2 DIY spitters, each with its own pump. Three air stones, plus extra aeration via the Oase floating skimmer. Tested water recently and NH3, NO2, NO3 (ammonia, nitrite, nitrate -- I'm gonna start using the chemical names as it's easier to type those....) were all "0" ppm. pH 8.2; KH 108 which is normal for my pond.

Sooooooo, water temp starts going up a little at a time. Couple of days ago, it was 89F. Then I found a dead fish. No obvious signs of illness, but I was suspecting the water temp..... Did a few things to make sure there was good water & air movement and waited. Then, last night, found a floater, but he was struggling so I brought him in, administered extra air [no, not fish-CPR]. Since he was still alive, I took a couple of scrapings and looked at them with the microscope. Found absolutely nothing on the slides, and again, fish looked fine [well, except from being 1/2 dead].

Ran out and got a water sample and checked the water temp. At 7pm, the water was sitting at 90.8F! OMG! The rest of the fish were top-sitting and lethargic. It was too late to do anything but pray. Well, the little floater didn't make it -- and he's one of my original fish, too. The water tested exactly the same as a few days before.

Oh, and BTW -- a while back I'd posted about using the round party platters to float on the water as a way to keep the water cool. I found that they only helped by a degree or 2, and it occurred to me that having those on the water surface MIGHT actually be impairing the oxygen and heat exchange, so I took all but a couple of them out. My water lilies have filled out a little more, so guessing I've got the maximum coverage I'm going to get from them.

This morning I cranked up the flow rate to the turtle bog and to the skippy as temporary measures until I could add another pump to do nothing but circulate the water -- got that today -- and added another air stone.

Also got 2 triangular sun shade sails that Son and I are going to put up in a little while. I'll do a slow water exchange, as well, and add the extra pump. Don't know if I'll just have the pump move water around or if I'll set it up as a "fountain." I got some stuff to do the fountain thing. I can see where either would be helpful.....

I know there was more I wanted to say, but my mind's drawn a blank. So, time for Son & I to start to work! Oh, and it's OK for us to get hot & sweaty out there -- we can run back into the AC'd house and drink some lemonade. Not so for those poor fishies! Now gonna have to watch them closely for signs of illness brought on by this heat-stress! Oh, and Larkin [fishin4cars] said his water temps are running in the mid-90's right now. He lives about 4 hours south of me. Can you believe that! These are cold-water fish!
Ad

OK, I remembered what else I wanted to say..... Weekend after next I will be out of town for a week [Son & I are going to the Boy Scout's NOAC conference in Michigan]. That will leave Hubby here to watch after the pond & turtles. I really hope to have everything stabalized before we leave so that Hubby won't have to worry about anything except feeding and watching water levels while we're gone.

Maggie read this article by Ray Jordon of the atlanta koi club about hot water conditions of our ponds its full of ideas that nobody has so far mentioned it took a bit of research to to acctually come across this most of the other websites only gave out ideas already given out to you but this guy has really researched this :-

Hope this helps you keep your goldfish from any harm

Ive also emailed my friend Syd who is the UKs formost expert on water to see if he can help suggest something.

wow, that's pretty warm! Sorry it happens to you. My pond water is very warm too. Now i'll have to go check the temperature....Yesterday after the hot day, we had huge storm which flooded the pond. It cools the pond down.

The article mentions a mister - that really would be a good idea. Those things work wonders at waterparks and splash pads.

I notice when I'm spraying my pots of plants near the pond, the cooling effects of the mist. Might look into the mister, mentioned in the article, from Home Depot.
Ad

Misters only work well in areas low in humidity. Here on the Gulf Coast, where high humidity is the norm during the Summer, misters only exacerbate the situation by raising the humidity even further.

Meyer Jordan said:
Misters only work well in areas low in humidity. Here on the Gulf Coast, where high humidity is the norm during the Summer, misters only exacerbate the situation by raising the humidity even further.
Click to expand...

OK, I have an update! We got the 2 shades up but they'll need to be repositioned just a tad because they aren't angled correctly to block the afternoon sun. They are casting some nice shade, so we'll see what happens. I added the additional pump and made my own "fountain head" for it [put a PVC cap -- the rounded kind -- on the end of the tubing -- drilled holes in the cap all around -- used threaded adapters so it would all stay together -- see pic]. The poor water lilies aren't going to like all the extra water movement, though. Fish are all looking good, active, very curious about what I was up to. 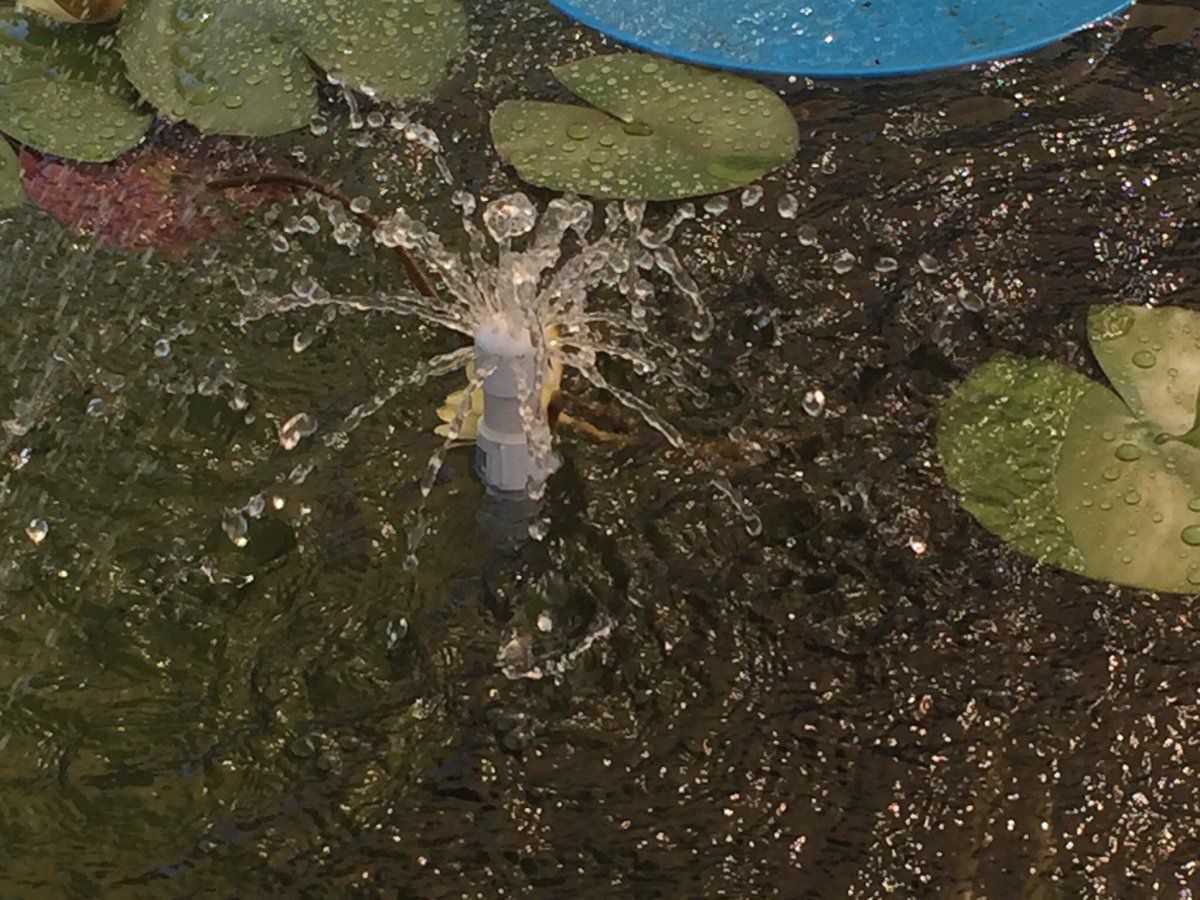 I know several people that couldn't wait to have one of these misting systems installed on their patios when these devices first hit the market several years ago. Every one of them had them removed within a week of installation. They actually made sitting on a shaded patio unbearable because of the already existing high humidity. No chance for evaporative cooling.
Ad

Yes but you dont live on the gulf coast do you Maggie ?
Plus Meyer is talking cooling people not water where as the chap who wrote the article was talking about misting and cooling water .
Even spraying water in a fine spray has a cooling effect on water so misting should work

Sorry to hear you are having trouble with your fish Maggie.

I'm not sure there is much more you can do than what you have already done. The shade sails are a good idea and I think the extra aeration your getting from your DIY fountain head is going to be an even bigger help (great idea by the way)

I checked the water today and it was 91F!!!! The fish seemed normal, though, going about eating like crazy, I touched the water and it didn't seems to be that hot so I'm thinking my device is defective, I'll have to grab a new one to check. I've had my water way warmer to the touch than this before and the fish were ok. Anyway, I turned up the air pump, just so they have more oxygen. The pond itself doesn't get sun all day, but the stream is the one that heat the water.

Last check of the pond for the day. Temp. was 89.1, so already a whole degree less than 24 hrs. ago -- LOL! But the fish looked fine, active, unlike last night..

Now, I just hope that all of these interventions will help keep the oxygen level up since that is the real issue with elevated temps.

Mmathis said:
Last check of the pond for the day. Temp. was 89.1, so already a whole degree less than 24 hrs. ago -- LOL! But the fish looked fine, active, unlike last night..

Now, I just hope that all of these interventions will help keep the oxygen level up since that is the real issue with elevated temps.
Click to expand...

Maggie our water movement is like yours every day of the week with a powerful flow of air to the spindrifter bubbler which really gives us water movement
It doesnt seem to harm the fish infact I think it breaks up their outline rom above very nicely if you could run one or more of your DIY fountain heads it may just lower the temperature even more .

So sorry you lost some, Maggie. I added the sail shades this year, and it really made a huge difference for us in water temp and algae growth. I hope it does as well for you! Sounds exactly like what I experienced with out smaller pond at the last house... high heat starved out the oxygen, and that's exactly how our fish behaved. Sounds like you've taken the right steps, and I do hope it is all stable before you have to leave town. If I were closer, I'd offer to pond-sit! Good luck!

Well, is everyone ready for an update?

After getting the sun shade up, I've been taking water temp. readings 3 times daily. The average water temp. is running 86-87!!! Yea! So the shade is helping to keep the water cooler. And the fish are acting normal, so I can only assume there is a good level of dissolved oxygen in the water. KOKO!

Glad to hear TM. My pond is back down to 74 again, the last few nights have been in the mid 50's
Ad

Good to hear that the shade sails are bringing the temp down. Very sad and I empathize with your loved fish now swimming in that great Pond above.

I couldn't sit in my yard due to the sun's heat. My solution (which took far too long for me to come up with): I researched and bought a willowy type of tall bamboo in a large plastic container. Since it's been in place providing shelter for my fish and I, we've gotten comfy and spend a lot of time together

This left me w/ one shaded area and the rest of the patio remained unusable for me. A friend pointed out a great sale on big striped umbrellas ($16) and stands. All of this inspired me to have more more plants out there. It's become a beautiful tranquil oasis.