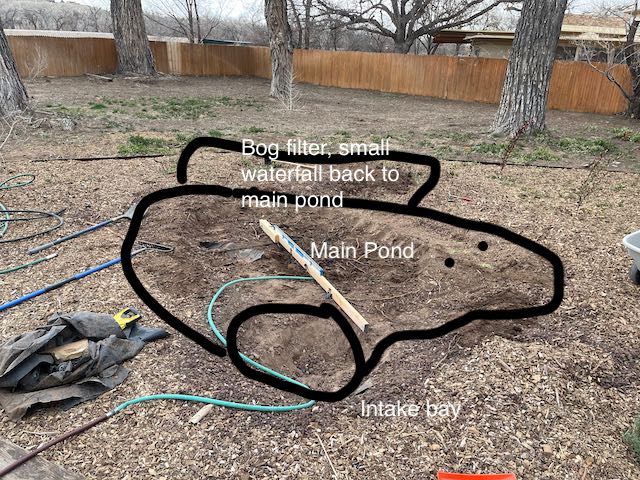 This is my pond showcase. It will be about 10 x 14 with an 8 x 4 raised bog.
Overview Discussion

combatwombat said:
Ah, good catch. I wonder if that is unique to non-woven fabric as it holds moisture in it vs. woven seems to shed water.
Click to expand...

How does this edging look? I feel like it needs some work where the mulch meets the gravel/rocks. Suggestions? May get more of the light brown rocks instead of the river rocks to color blend into the mulch better? Also I think I may have overestimated the sun tolerance of hostas. I thought with constant access to water they might be okay in close to full New Mexico sun... 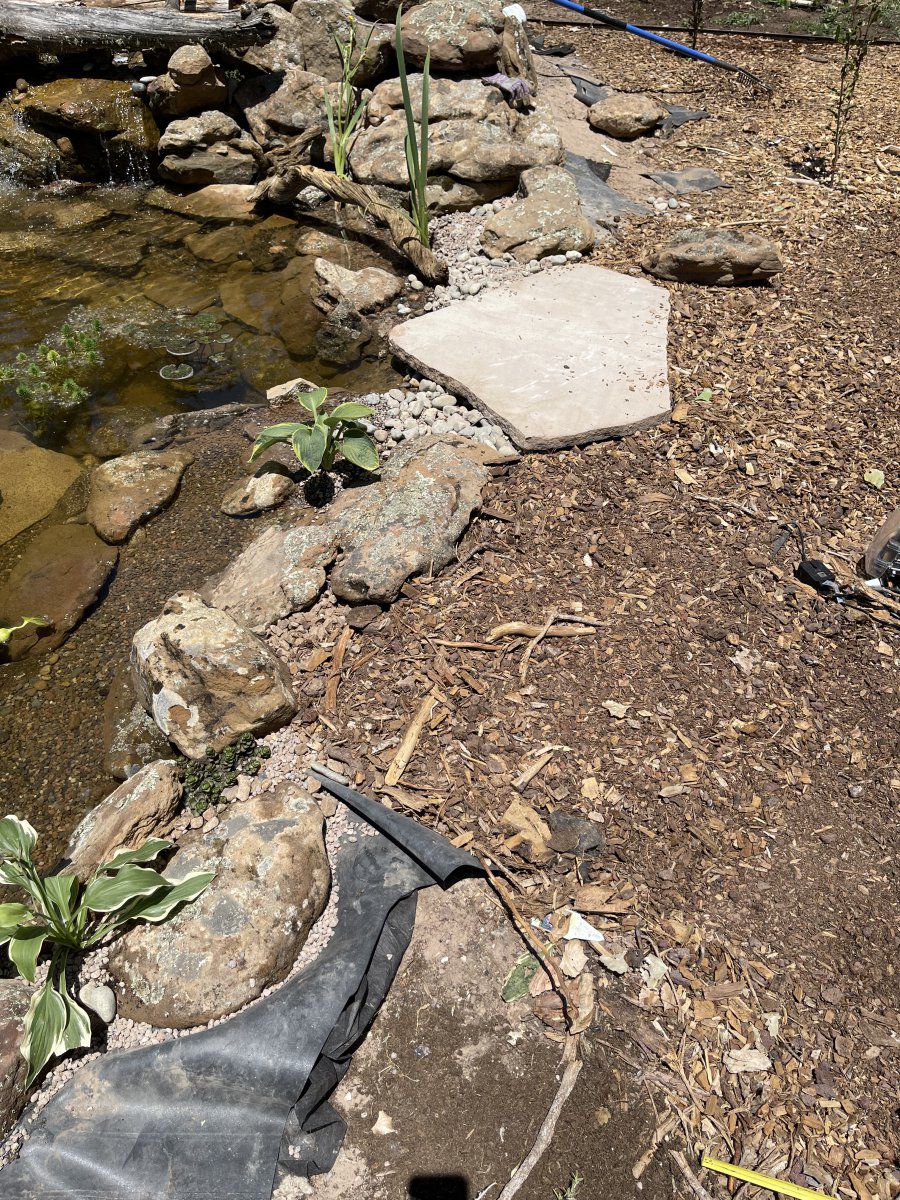 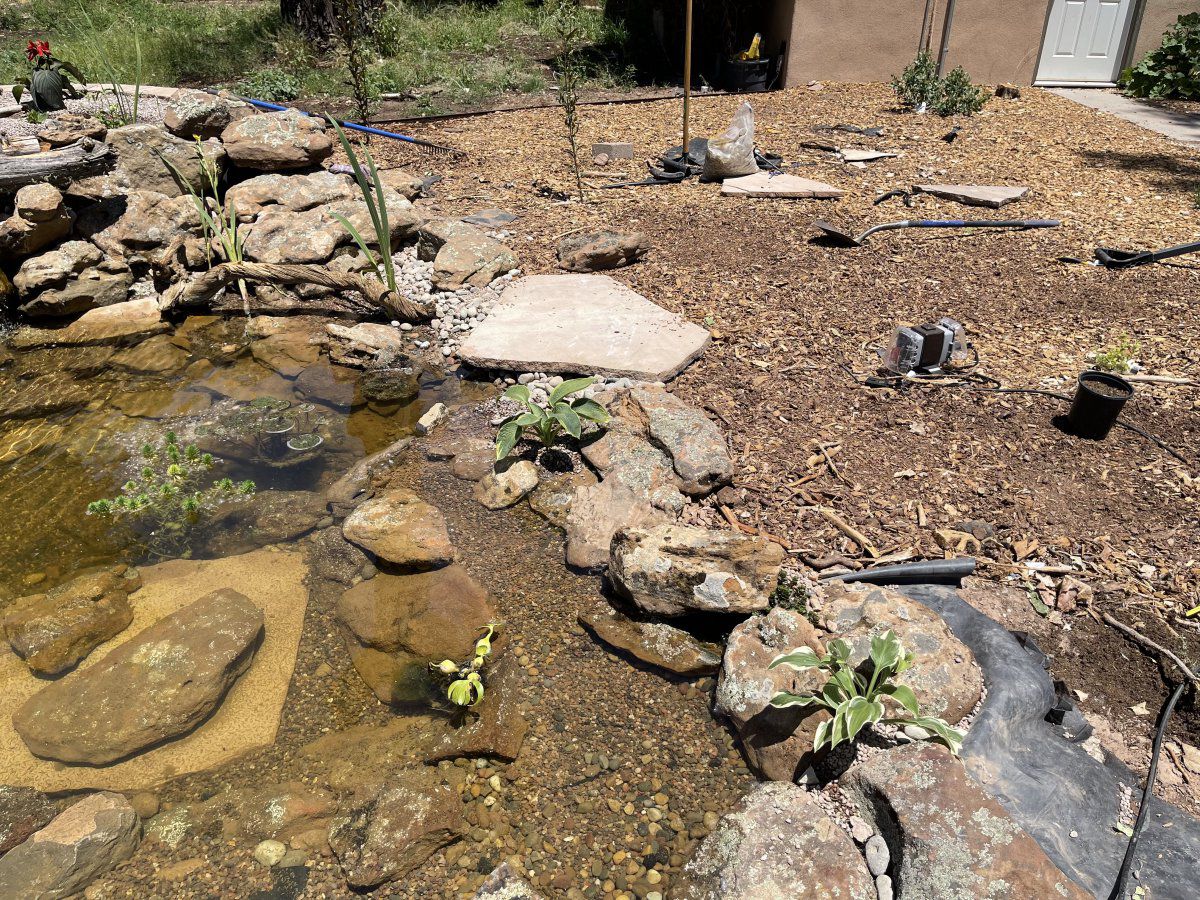 I like it! Looks great. Maybe mix some more rock into your mulch edges. And plant some terrestrial creepers that will soften the rock edge.

But really it looks good!

I agree - looks good! Some plants would soften the edges. I like how J.W. uses creeping jenny. 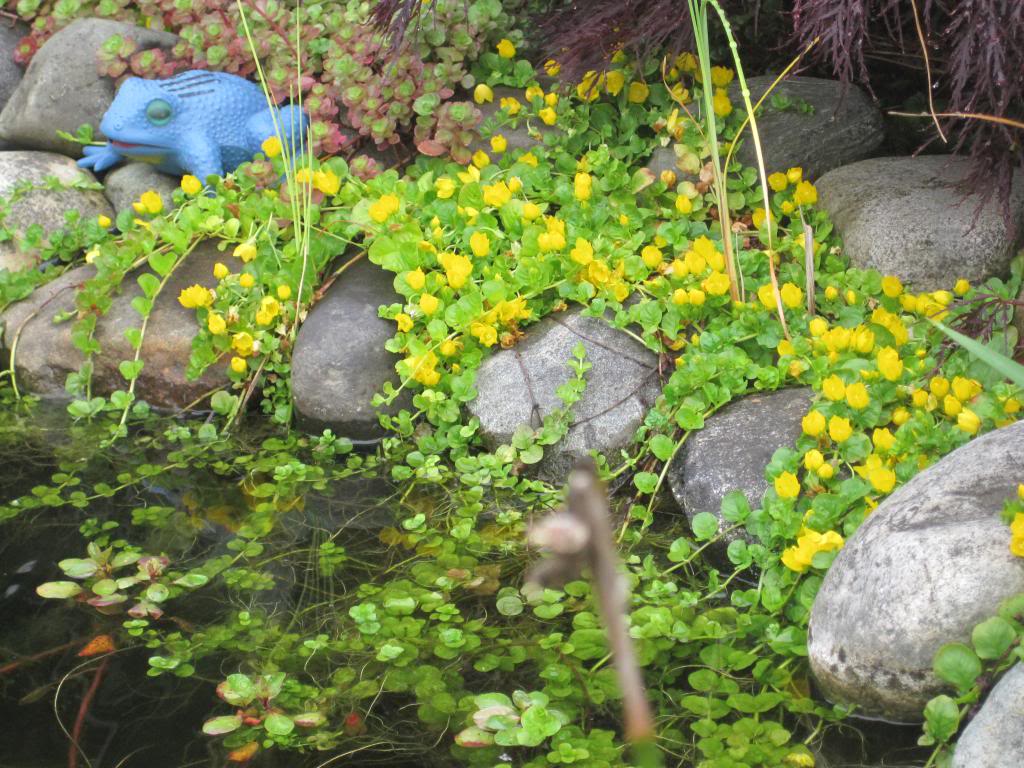 Finished up the edging! Pretty much done now. Two goldfish and a lotus were just added. Would love some recommendations on native ground covers that don’t get too crazy to fill in between rocks. I did add some watercress in scattered locations, not sure how much it will grow out of the pond. I have access to unlimited yellow irises and cattails in the ditch behind my house so can always add those if I need more plants.

Looking really good, Rashad. Wish I could advise on ground cover, but I have no idea what would work in your area. Local garden center will probably be most helpful.
Ad

What a nice job!
Have you looked into low growing sedum to plant outside among your rocks?

cas said:
What a nice job!
Have you looked into low growing sedum to plant outside among your rocks?
Click to expand...

Thanks! I have some sedum tucked in there, so sort of waiting to make sure it’ll survive before planting more. I made little plant pockets and the bottom is wicking some water from the pond, and I’m a bit worried it’s too wet for sedum since they’re drought tolerant. They seem okay about 2 weeks in so maybe it’s safe to add more.

Perfect. That stuff will take off and will look great.

In praise of the ecosystem. It's kind of amazing how quick everything moves in. Without consciously adding anything I've got snails, random worms (nematodes?), I saw a damselfly laying eggs under the edges of the lilies, birds coming in for a drink, bees. wasps. Pretty neat! And the pond is only really a few weeks old.

Ok I’m starting to get the dreaded string algae, and I think it’s mostly from lack of shade and the plants in the bog and pond being relatively new and still getting established.

I have a fairly shallow area of the pond about 4-6 inches deep in front of the intake bay that’s too shallow for a lily. What can I put there to shade the water? I have two hyacinths but they really aren’t doing too well and spreading. Not sure why. Maybe I need to do a fertilizer bath for them. Lily and lotus are growing like crazy and shading the deeper parts of the pond well.
Ad

Algae is indeed normal in your pond getting established, and realistically some will always be there. I would add more plants to compete with the algae. You can just pull it by hand or grab it with sticks. But it is serving a purpose of eating nutrients. So I might leave it longer til more plants get established. Some plants do better than other. My couple of cuttings of aquatic mint from a friend last fall has become a bush of mint over 3 feet tall. My aquatic clover never came back after winter.

Laaf said:
My aquatic clover never came back after winter.
Click to expand...

Consider your self lucky that stuff is crazy invasive.

Hey everyone, just wanted to share some updated photos. Things are going well, fish are more outgoing, plants are getting well established. String algae seems to be growing slower so I think the rest of the plants are getting their mojo going. New bog plants I'm trying out include a red currant (in a pot with soil, it was dying bare root in the pea gravel), Mexican heather, and some green onions from the supermarket that are at least not dying, if not thriving. I also just added a 1/4 inch poly line off of a hose bib nearby (from our well) so that whenever the sprinklers kick on the pond gets a stream of water. I think I have the flow adjusted so that it's relatively balanced with evaporation but it's only been a week so hard to tell. 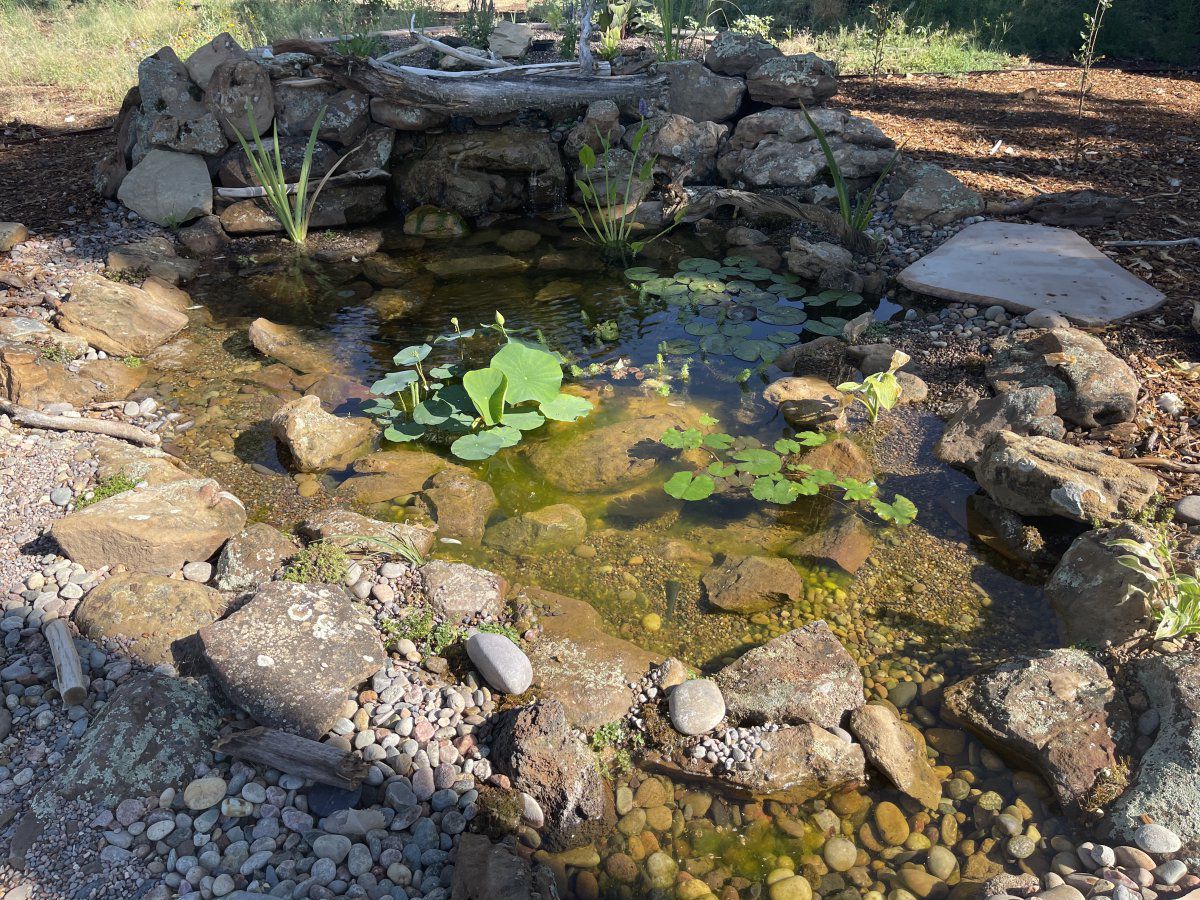 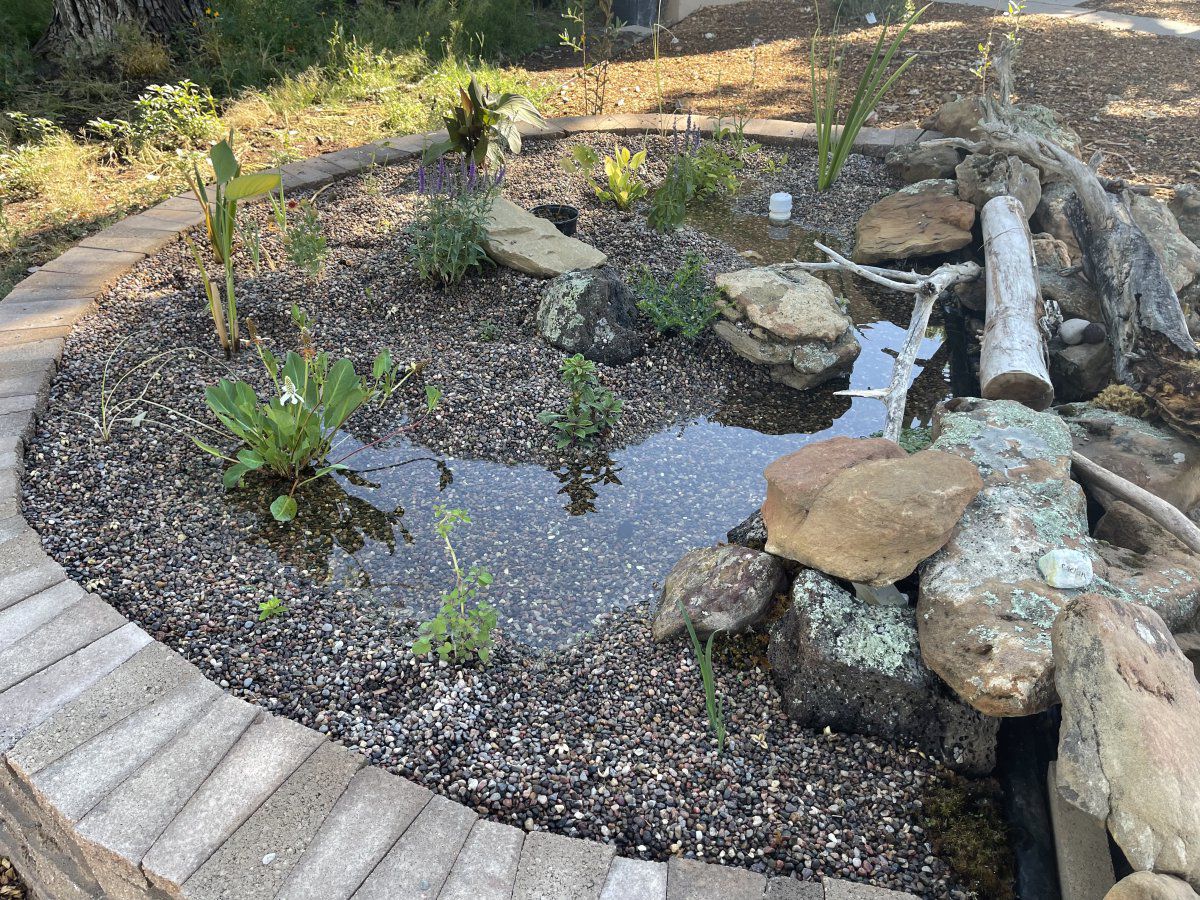 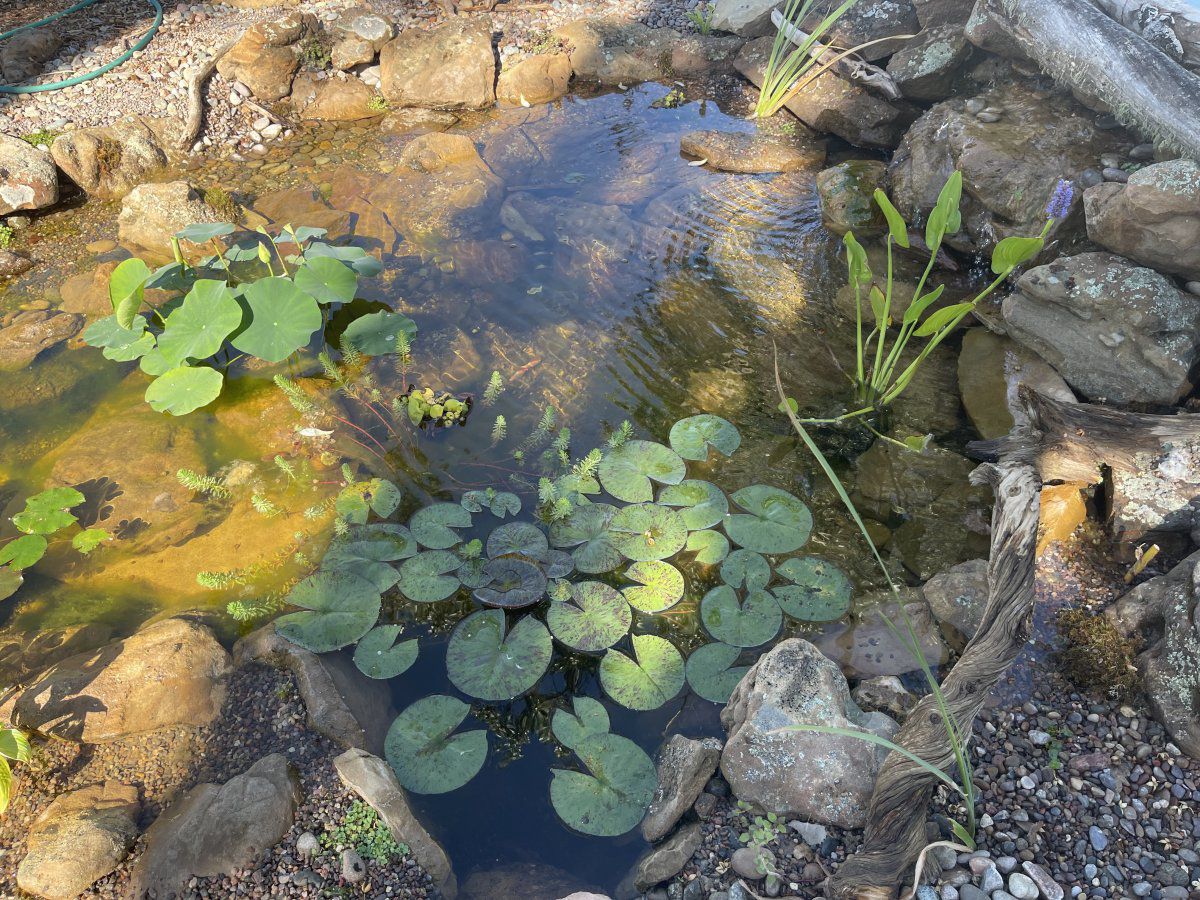 Are these baby goldfish or some other fish that hatched from eggs on a plant or something? I guess they’re not kidding when they say goldfish breed fast… 4 is going to become 8 assuming these survive.

Congrats! Those are baby fish.

Can you share updated pond pics? I am thinking of building a bigger pond myself with a bog, intake bay, and a waterfall in addition to the bog spillover.

Sure! Here you go. I would say my main lessons learned are:

1. Build the walls of the bog higher relative to the waterfall/spillway. Ideally at least 4-6 inches above the water level in case it gets clogged/crowded, that way water won't back up out your bog walls. So far I'm okay but if it's too close for comfort with my current design. Maybe next summer I'll raise the walls as I do have extra liner tucked in under the caps of the bog wall.

2. Think about how plants will impact the flow of debris into the intake bay. Without any plants, the intake bay worked like a charm. It still works, but a lot of leaves get stuck in the middle of the lilies and the parrots feather. I just need to poke it with a stick or something and it will usually come free, but just one more little thing to think about. I might rearrange some plants to free up a path through the middle for debris.

3. My water is crystal clear, but I did have quite a bit of string algae that I had to clear periodically from the pond and bog for esthetic reasons. It absolutely dominates the waterfall. I don't mind the look so much but I was hoping the bog would cut down on the algae. I'm guessing year two the plants will be more established and be better able to suck up nutrients. I'm also going to add some more submerged aquatic plants. The pond is in pretty close to full sun from about 10am to 3pm in the summer, which I'm sure contributes. I'm also using well water which has a decent baseline phosphate level.

4. I didn't really appreciate how much the wind in Albuquerque was going to blow gunk into the pond. Cottonwood season I could have cleaned out the intake bay 3 times a day if I wanted to. It was literally covered in cottonwood fluff all the time. Pretty sure a skimmer might have gotten clogged from the fluff. Very curious to see how crazy fall is going to get with leaves to clear out.

5. A lot of the plants took quite a while to get established, so if you can it planted in the spring, rather than early summer when I did it would be better. Overall most things took off well. I even sprouted a few cuttings (rosemary) by just putting them in the bog and they grew roots and everything. Love the Yerba Mansa in the bog.

6. Goldfish really don't need supplemental food. I started with 2 sarasa comet goldfish and 2 shubunkins. I now have one baby that made it to the big leagues and hangs out with the big fish, and several mid-size babies that if they make it through the winter might join the club, and then many smaller babies that I think aren't going to make it? Who knows. I've literally fed the fish four times. If anyone in Albuquerque wants a big thing of fish food that I bought thinking I was going to need it feel free to message me.

7. During the peak of summer I was losing a TON of water to evaporation. I was really paranoid I had leak or something but it's just that hot and dry here. I set up a 1/4 inch line attached to the backyard irrigation that runs into the pond so whenever the sprinklers run it gets topped off a bit, and I can adjust the flow down (now) when there's lower evaporation or if it rains. I didn't bother with a float valve but eventually that would probably be the better solution.

8. Build some tolerance for multiple water levels. I sort of lucked into this, but the intake bay has about a 4.5 inch water height variability between minimum and maximum which offers plenty of cushion (so far). If the water level drops below that, the pump will stop working, but the fish will at least have water because the water will stay at the bottom level of the intake bay if that makes any sense. All my plumbing is within the pond so the only real potential disaster is a hole in the liner somewhere, or the bog developing a big leak, but even then the main pond would retain its water.

9. Plants that have done the best: Yerba Mansa is native to here and has grown super well and spreads by runners. It's also beautiful in bloom, and tolerant of our alkaline soil/water. Cardinal flower took a while to get established but eventually gave off some awesome late summer flowers that the hummingbirds loved just as they were getting ready to leave. The swamp milkweed I planted also took a while to get established, and it didn't bloom this year, but I'm optimistic for next year. Hardy lillies and the lotus did super well, although I battled aphids all summer. Chocolate mint also did great and spread well. Several other plants suffered from iron chlorosis from the alkalinity but survived and seemed like they eventually adapted. Those include water plantain, irises, Mexican heather. The only thing that died completely was a native gooseberry I thought might have a shot but I think the bog was just too wet for it.

Happy to answer any questions! You're welcome to come over some time and take a look (I think you're in Albuquerque if I remember correctly!) 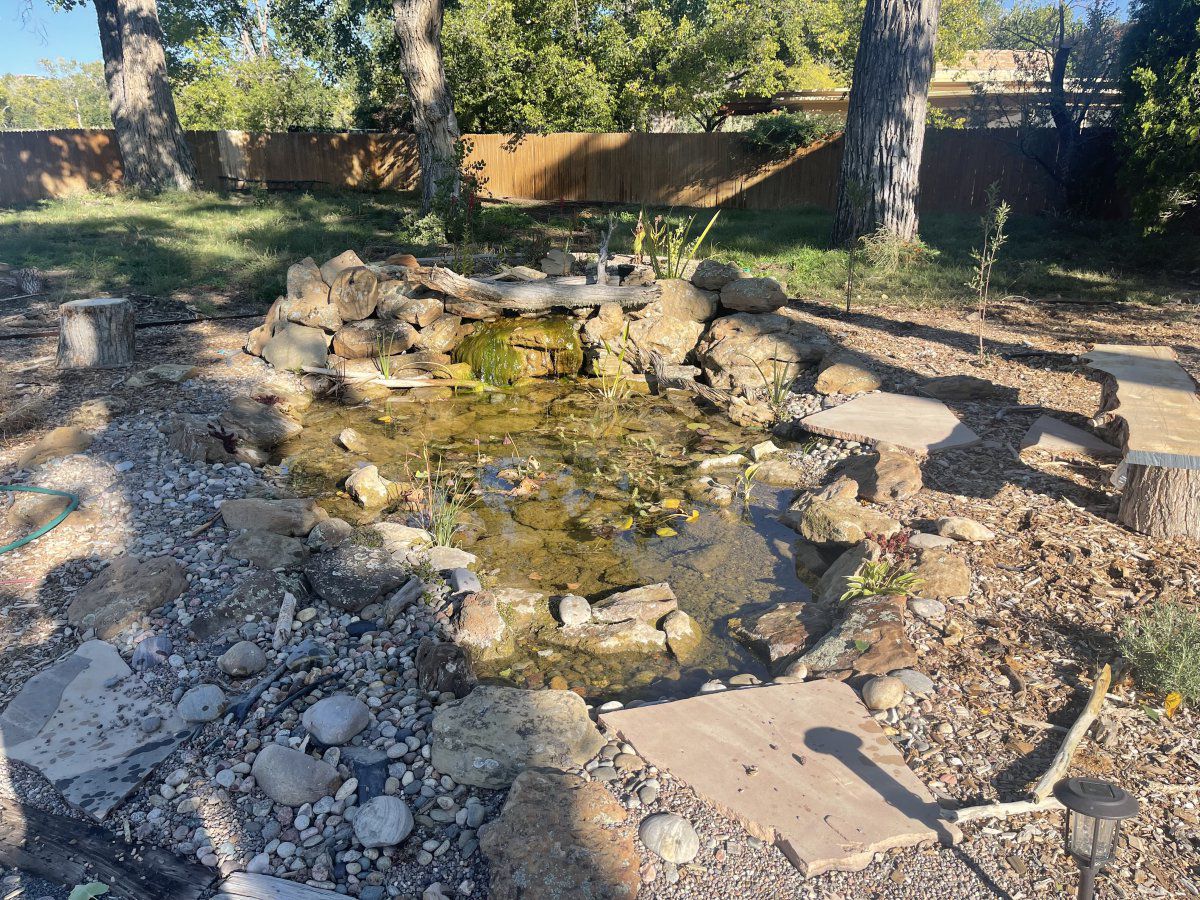 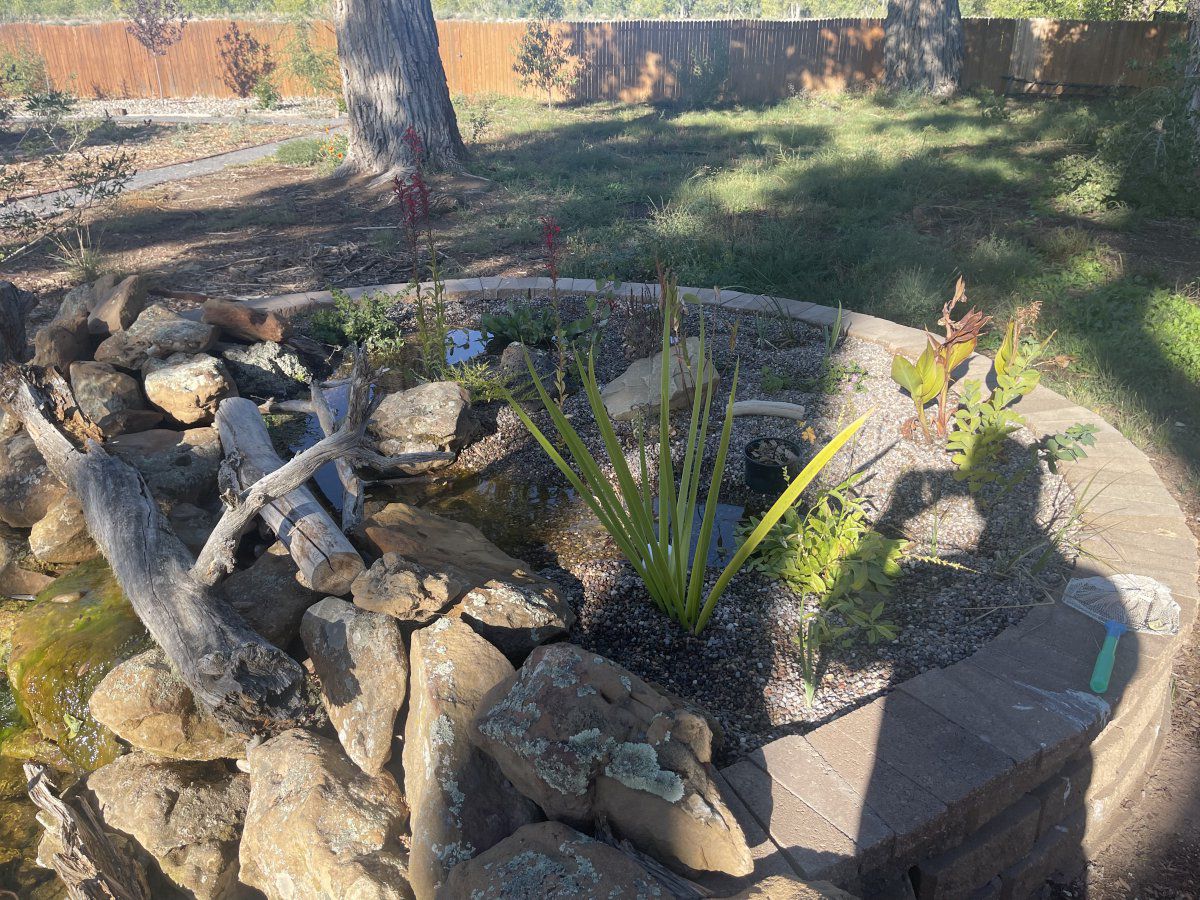 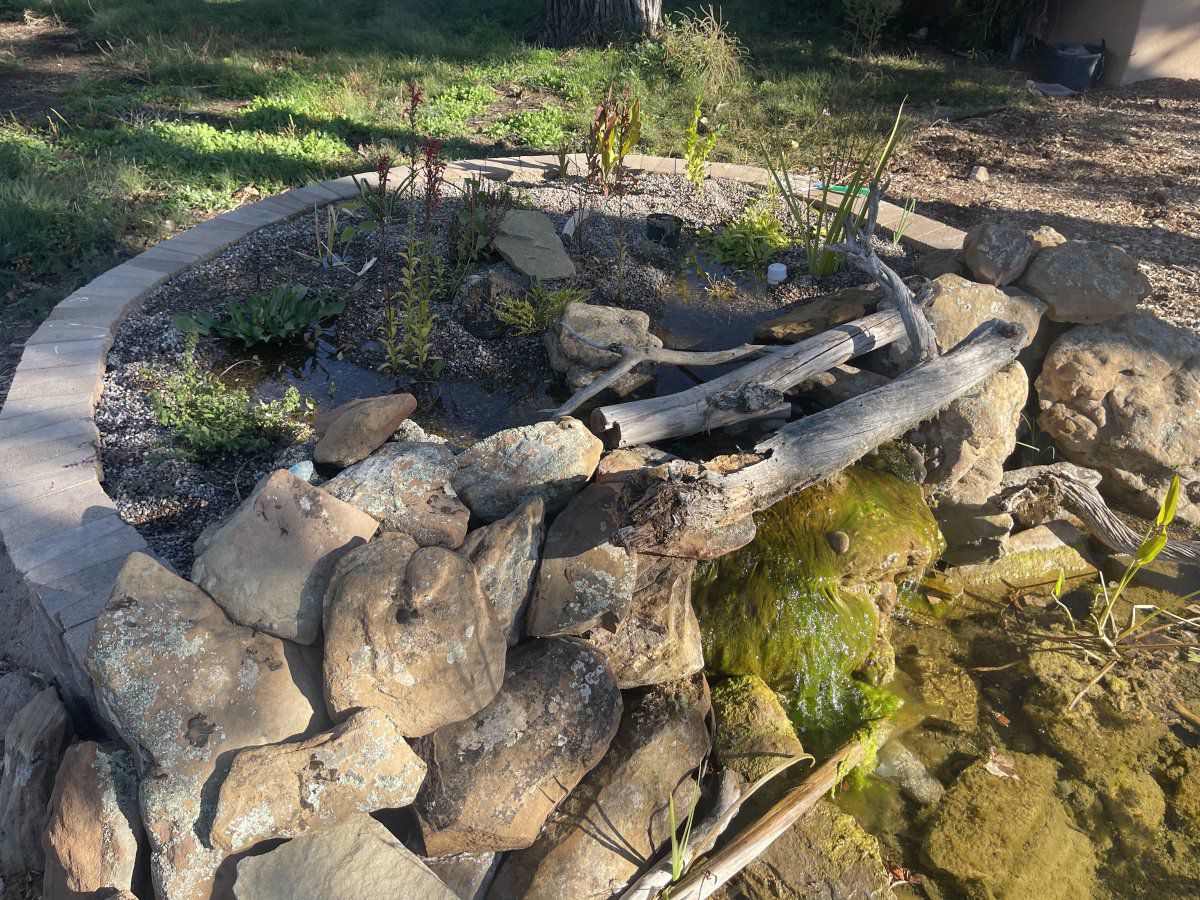 Thank you for your detailed description!
Ad