Got the underlayment done today. Relatively quick and painless. Liner is light enough that I might try my hand at putting it in myself tomorrow if I get a break in work / the rain.

For those of you who rocked your whole pond...

Did you ever get the sinking feeling while installing your liner that all the hard work that comes after that will eventually have to be undone when that liner fails? Hopefully it won't be for many decades into the future. But those are going to be decades of crafting and perfecting the landscape... only to have to undo it once it's perfect!

The thought of it is depressing me just a little bit.
Ad

Yeah I got those feelings as well but for great reasons then you. Like I said before you have perfect soils for a pond. ,from what I can see. A heck of a lot better then I had. But I stepped up the unlayment in a big way and a heck of a lot of work from raking to compacting. Even with your woven fabric you should be fine if worried about I t and you said you had a lot left over apply a second layer. Make sure you leave a little slack in the liner att you verticals so if something settles it does stretch the liner. The smallest of rocks can be the issue. If it looks sharp dont use it. And get plenty of protection under big rocks

Nah. We don't use any kind of fertilizer around the pond. We do get mulch floating occasionally, but it drains down pretty quickly. It is fun to watch the fish swim into "uncharted territory".

Yikes ... I could never have that as I am not always home .

now you've got a nice blended water backyard, it's always what aquascape wanted, you can't tell where the land ends and the water begins, maybe just to a little extreme ......

Was a nice afternoon, so I loaded the liner up on a dolly and wheeled it into position in the backyard. Dumped it about 3 times on the way there. It's a 30 mil HDRPE liner from American Tilapia. Only 200-250 lbs, but was awkward to transport on my own. Got it rolled out across the pond.

First impression: SUPER tough, durable material. Also VERY rigid. No idea how I'm going to get it to form to the contours of the pond. I'll just have to take it slowly and figure it out a little at a time. Hopefully the sun beating on it will soften it up a bit but it's on the N side of the house and it's November, so not holding my breath on that one.

Also bit the bullet and bought some Aquablox for the intake bay. Had been experimenting with some plastic storage crates that were only $4/ea from Target, but they were just a little too flimsy and hard to source in a useful quantity.

I grew up a little bit poor, so I'm hardwired to save money at every turn no matter how well off we are now. Sends me down some creative rabbit holes that are fun but often fruitless. Anyway, now I know that if I need to drive a tractor over my intake bay, the Aquablox can handle it!

Looking good man! Keep up the good work. I almost went with that liner material but settled on the EPDM myself. Of course I didn't have such a large pond to deal with. I'm sure you'll get it lookin good even though it's a bit rigid.

I used ppl36 which also was stiff. We laid it in the pond and just started at one end and worked it down. Have a few wrinkles that have never caused any issues.

BUT it was in the dead of summer, hot than hot. And my pond is full full full sun.

I love the fact it is not slippery like epdm I can walk in the pond without slipping too much.

I love your videos! I've got no experience with HDRPE, but I can tell you that even the very flexible EPDM liner is challenging in it's own way. Don't worry too much about folds or creases. We found that we were able to work out a lot of those issues as we rocked the pond in. Just slow and steady is the key. The folds don't really hurt anything inside the pond and behind big rocks. You need to be a bit more careful as you work around the edge, since a fold does have the ability to wick water. But since the pond gets wider around the top, you'll find you have less folds naturally.

I'll be curious to see how this material is to work with for edging.

The only issue I have had with folds is it gives plant roots a area to wrap around and gives them something to hold on to when trying to thin them out . A quick bead of caulking along the fold could limit this

I have never seen that problem. But maybe my plants don't like to grab folds.
Ad

I've got HDRPE in my pond and have numerous wrinkles. And I had to fold around a figure 8 upon my expansion. I just kept folding and moving forward. I knew it was going to be impossible to hide and truth to tell, once you get some algae growing on it, I found from the videos that it tends to now look like large cracks in a boulder wall. I rather like it now even though I could see the folds then. I have many folds too on the bottom, probably from the water pulling and finalizing where it wanted to sit. I kept a lot of extra liner (and still cut a lot off) so I have maybe 2-3' which I wrapped up and then folded. My pond is berm-ed all around and I just pulled it up and made flat surfaces for soil and some plants. You'll find when you begin to fill that you can do a bit of manipulation, if you want to. I decided I'd battled enough and just watched the pond fill back up. A reason some give re smoothing out folds is because it's supposed to create dead spaces but I've not had any issues like that in 10 years.

I'd suggest you get at least one person to help as it can be frustrating because you can fold all you like but it's not like paper which will hold it's fold--it tends to want to curve back out.

@brokensword: Glad to hear it all worked out for you. Almost no one is using the stuff yet, so not a lot of real-world info on it for water gardens.

Re: folds. I had the same thought. I can fold it, but it’s stiff enough that it won’t stay there without some other force acting on it.

I will be rocking in the whole pond, so maybe I just won’t bother with folds until I have a rock nearby to hold it in place.

combatwombat said:
@brokensword: Glad to hear it all worked out for you. Almost no one is using the stuff yet, so not a lot of real-world info on it for water gardens.

Re: folds. I had the same thought. I can fold it, but it’s stiff enough that it won’t stay there without some other force acting on it.

I will be rocking in the whole pond, so maybe I just won’t bother with folds until I have a rock nearby to hold it in place.
Click to expand...

it's been around for a while (my first version also used hdrpe) but like a lot of 'aquarium myths' people propagate what's been done since forever. I used the hdrpe because it was a lot less expensive and lighter. Plus, I didn't need any underlayment--as you're finding out, it's pretty tough stuff. I'll post some construction pics from last year showing what I had to work with and some of the curves/folds that ensued.

This first one shows the folds and issues re using the one liner to also line the new bog. What I had to do is line the new section first including this bog and leave half the liner still rolled up awaiting lining of the old part later. filling up the new section 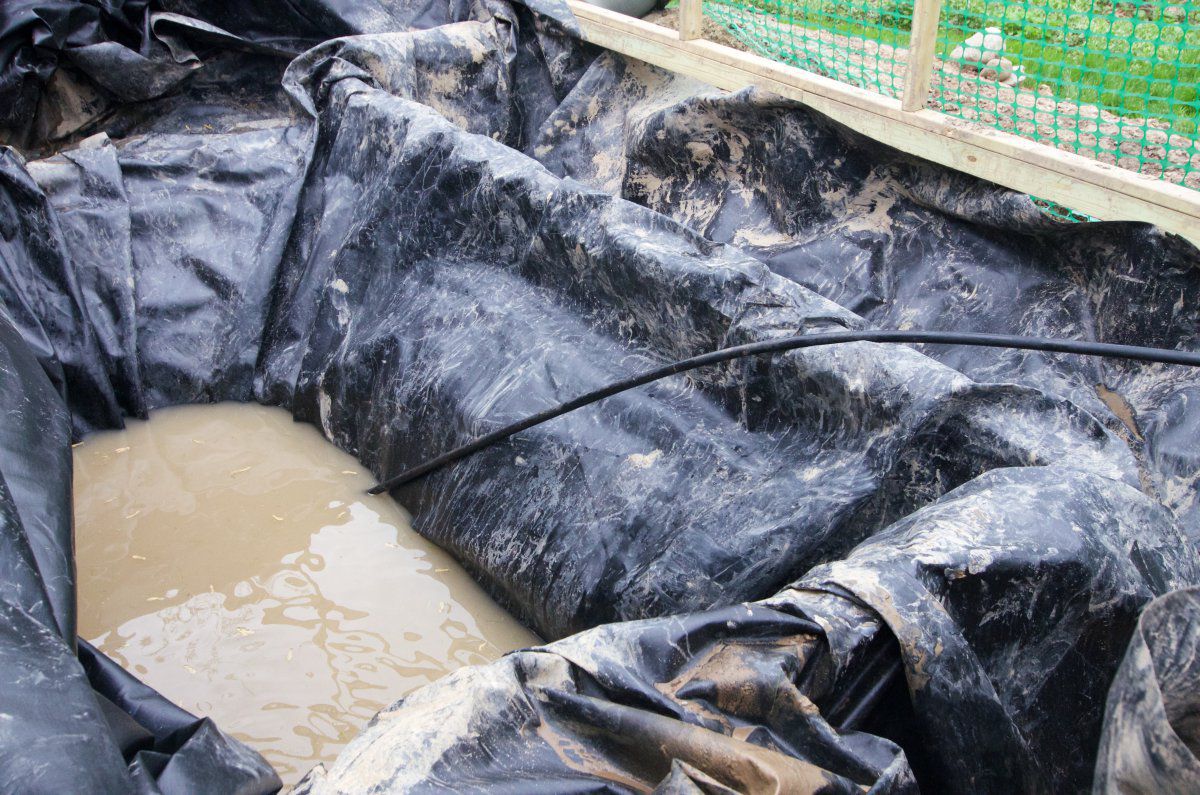 new section with newly planted bog v2; you'll notice the other half of the liner rolled to the left. At this point, I still had the 3' bridge of soil between old and new still intact. 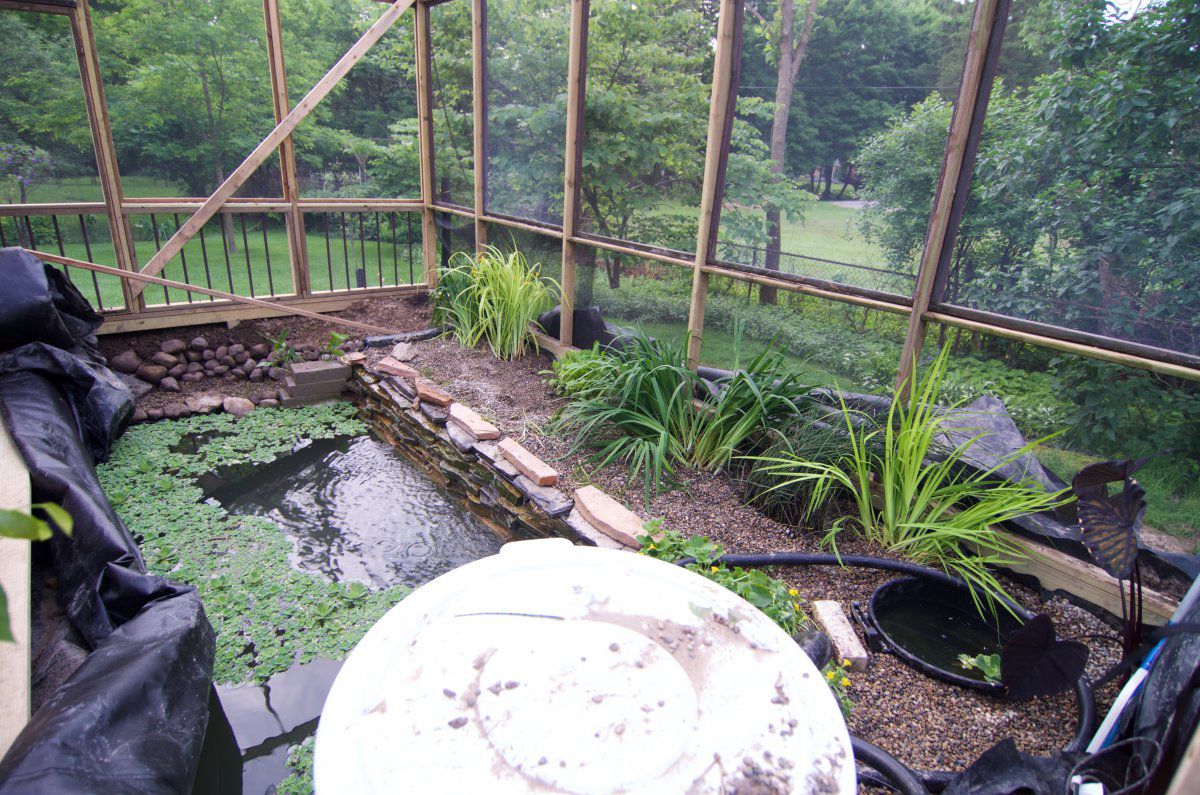 this shows the roll of 1/2 liner sitting atop the soil bridge waiting while I fixed shelves and dug out various portions of the old. At this time, I have the new fully filled, 5' depth. 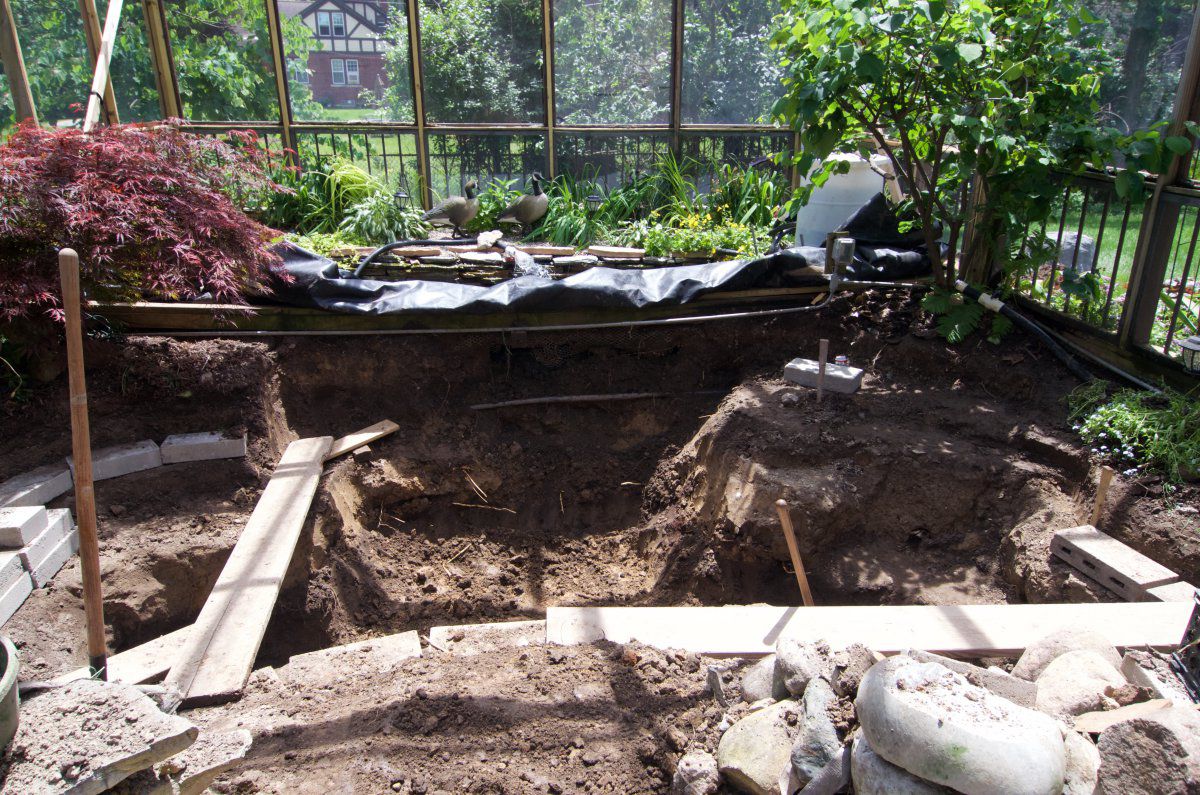 you can see I've lowered the new and dug out the bridge halfway. Again, to illustrate all the fold/liner issues still beckoning. liner fully rolled out and starting to refill; you can see the wrinkles I more or less left intact. another angle during refill. 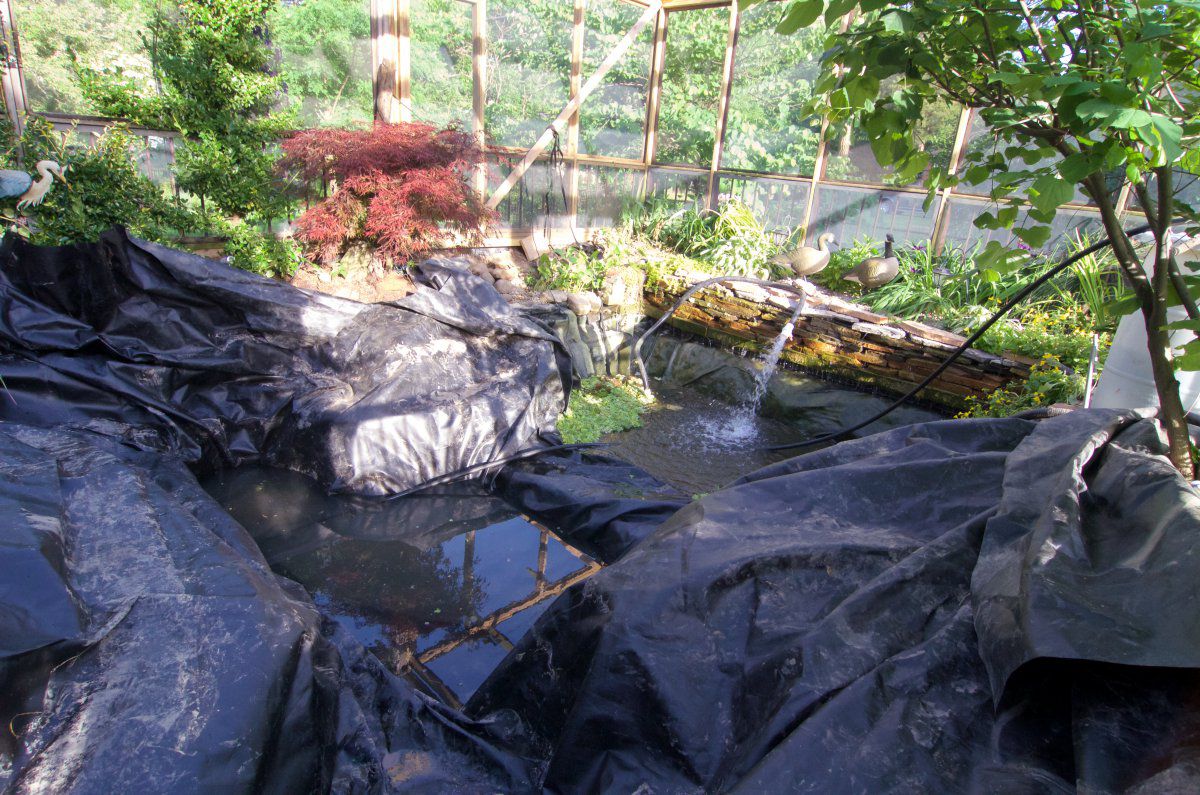 I filled the remodeled 'old' part and let it sit for a few days then below, started to fill so the new met the old; it was fun to see the fish swimming across as the water lapped the land bridge in the middle. 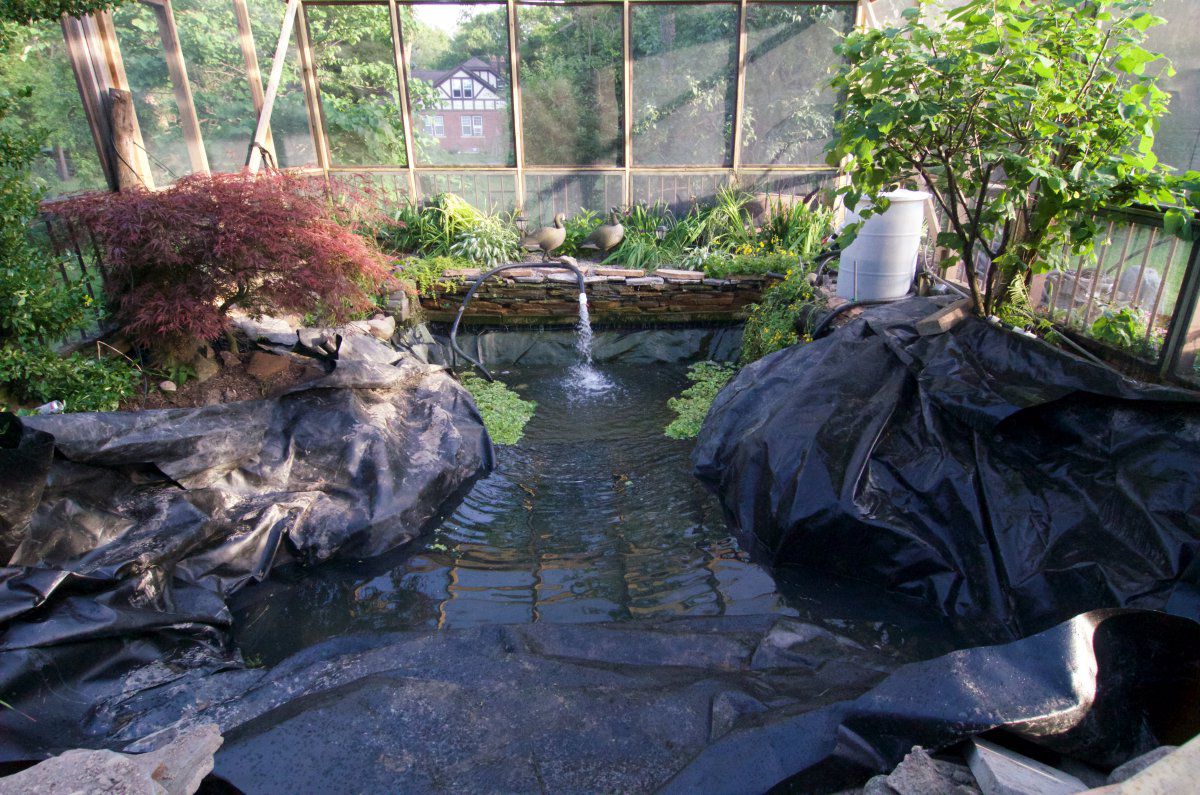 and a picture from this summer to see how it all filled out. 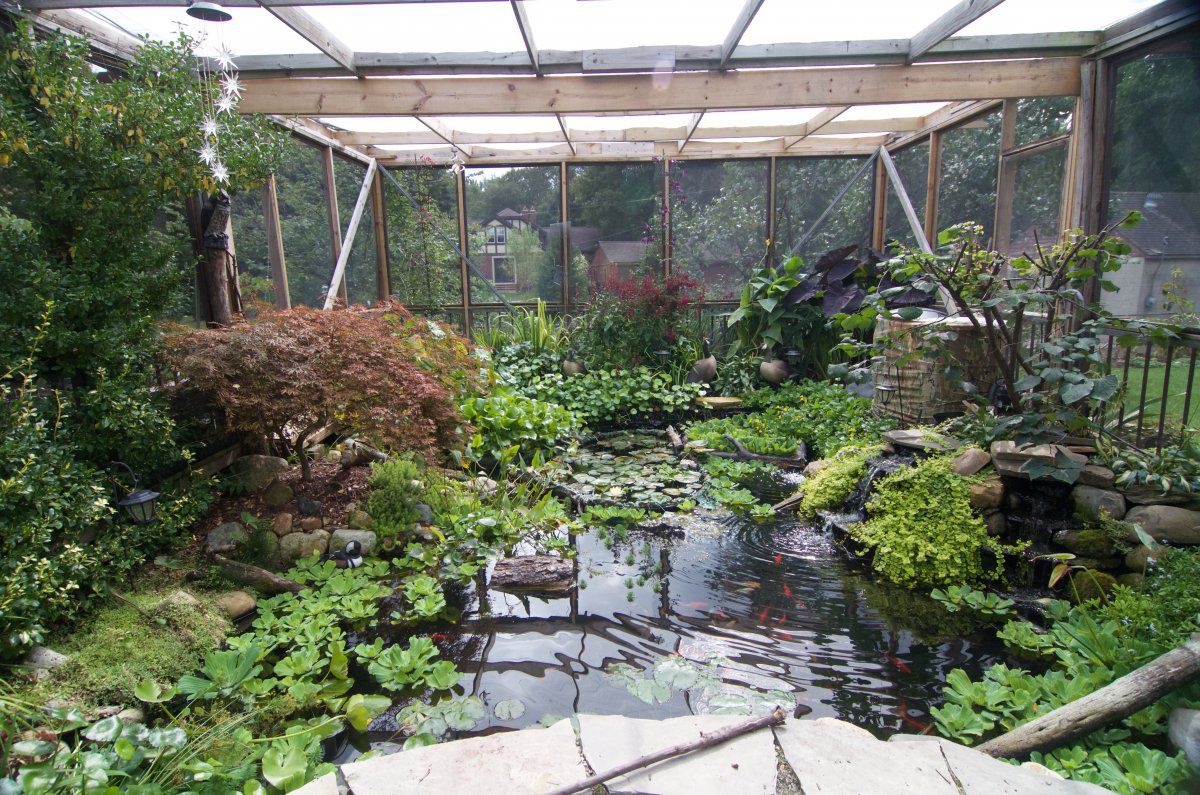 @brokensword: What a gorgeous pond. Landscaping/plants really makes all the difference, doesn’t it?

I look forward to my install going as successfully as yours.

combatwombat said:
@brokensword: What a gorgeous pond. Landscaping/plants really makes all the difference, doesn’t it?

I look forward to my install going as successfully as yours.
Click to expand...

thank you for the compliment! You seem to be doing a lot of research and planning so I'm sure you'll be just like the rest of us and about a year or two later, think of how you'd do SOMETHING differently the next time you dig! Ha! It's really a learning experience when you're personally involved and I don't think you'd have it any other way. At least you're going big right away; should prolong your 'shoulda made it bigger' for a few years...
Ad

I believe that if it holds water, it is technically a pond.

Therefore, I have a pond. 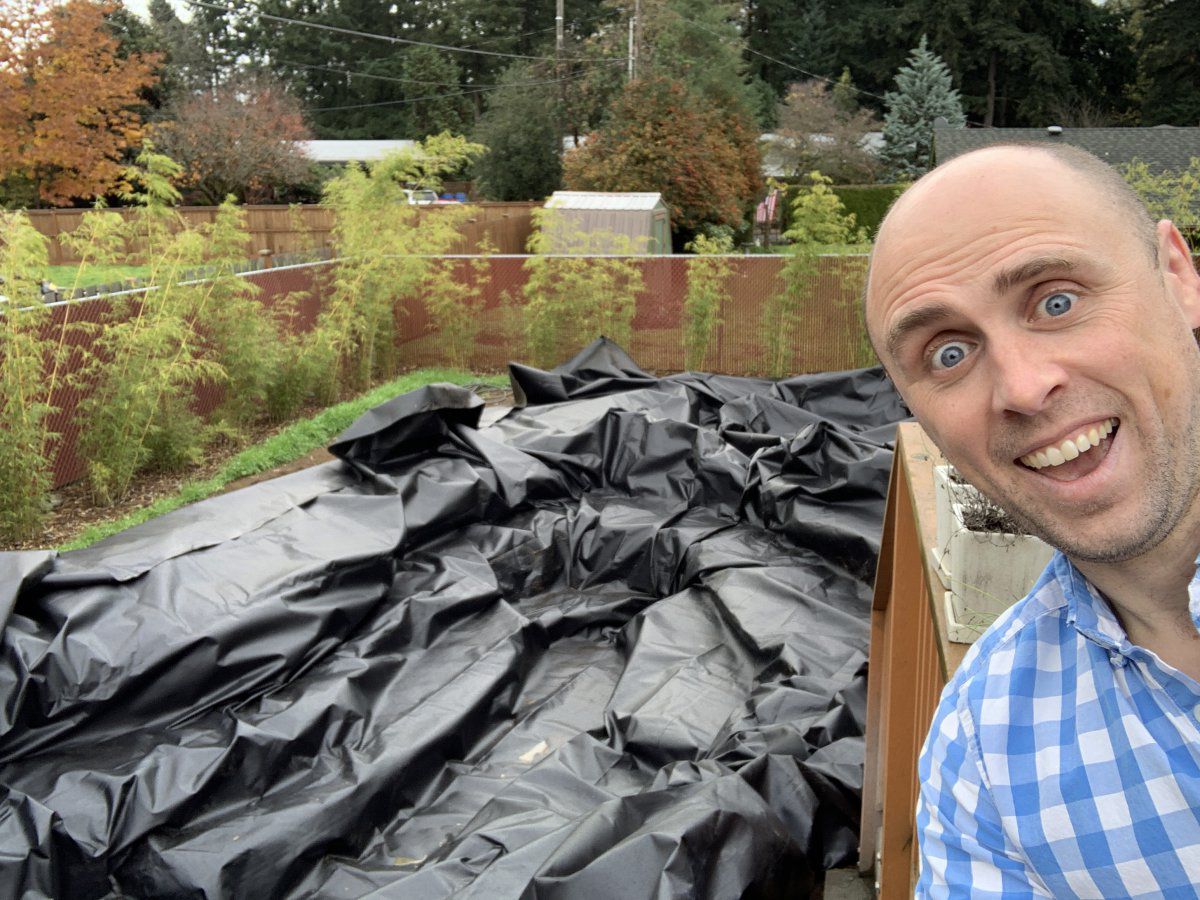 combatwombat said:
I believe that if it holds water, it is technically a pond.

Therefore, I have a pond.

um, I don't see any water...and too, a puddle holds water and isn't technically a pond. So, nope, I call fake news. Come on back when we can see your edge stones and the water line! j/k

Sorry to add to the popping of your bubble but if your rocking your pond thats when it's a pond . rock it in and see if it holds water not many can say they got all the rock in and no leaks ...... myslef included
Ad

Split hairs a beautiful pond to be! Our frogs moved in as soon as we had a liner laid, therefore mine was a pond even without water! lol
You must log in or register to reply here.