Evening folks (from the UK!),

I'm a seasoned pond construction 'watcher' but a novice builder; my first build last year was a modest 1.5x2.5m pond with a 2m rock cascade.

I am redesigning our garden largely around a pond, which will be 2.2x3.5m and surrounded by natural stone walling - not because it is a raised pond, as such, but because it will be the middle tier in our three tier garden. The picture on the left below shows a build similar to how ours will look once complete, but with the addition of a waterfall similar to the picture on the right-hand side, whereby water from a small pool behind the top of the wall will flow along a channel and pour down in front of the wall into the pond at its base (not unlike the third picture). 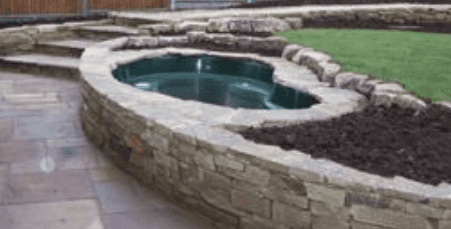 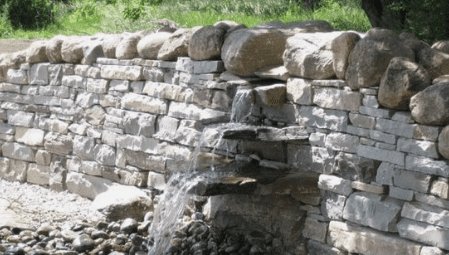 Where I am getting myself into a tangle is when it comes to avoiding capillary action within the wall and how I can use pond liner to avoid any water loss in the wall. The pond will be constructed out of 45mm EPDM, as will the small header pool at the top of the wall (which will be at ground level, the wall having a retaining function. I have in mind to run a separate liner up between the two skins of the wall until it meets the first through-stone, which the liner will run behind before going back between the skins and then, on a course just below the channel, to start a new liner (overlapping in each case) which runs from the header pool. My proposal doesn't translate very well into words so, in the must rudimentary fashion, what I am thinking is something along the lines of the attached diagram (where the darker line is the liner and the cross-lines are where one liner overlaps another).

At the top, it will be a case of the channel that flows over the wall and into the pond being 'encased' in liner so that the overall effect is to create, using three separate pieces of liner, a tank comprising the header pool, the drainage channel and the pond. I also plan on running the liner within the wall to a few blocks wide of the waterfall on each side. All this leaves me scratching my head and wondering:

1. Will the above proposal work to ensure that any water, even the backsplash against the wall from the waterfall, will be tanked and thus flow into the pond;
2. If not, does anyone have any experience of a similar construction to be able to advise me of the best solution; and
3. If it would work, is there still an easier way?

Thank you in advance for any help that you can offer me. And remember, go easy - I'm a newbie.

I do not have experience with your situation but: Welcome to the forum!

If I understand what you are asking.....capillary action isn’t your problem so much as evaporation. Stones and rocks will lead to more water evaporation when those surfaces get wet. Not sure how this can be avoided, though.

I don't think you will have to worry to much about the water on the rocks and heating up due to the sun and evaporation for very long. Though i have not been to your country from what i have seen it won't take long for moss especially if you rub some moss on the wet rocks for the moss to grow on the wet rocks that are in the splash zone.
The other key to design of water falls is about the exact opposite that most do in building them. And that is to have the falls SET BACK to have what they called a character stone to each side. with the falls set back this is almost always the case in nature as the water can't erode or push the large rocks. even if they are not large boulders to build the falls in the shape of a boomerang help to collect and direct splash into the pond. when water just drops in the pond and the walls are set back and or flat the splash zone is allowed to be much larger. thus needing the liner quite large off to each side.

The wall is being built with an inward curve already to fit the shape of the garden design so it is reassuring to know that will mitigate against water loss and, absolutely, moss will enjoy this site. I plan on naturalising the feature soon after with a yoghurt and moss application too.

I had probably been thinking of an over engineered solution to effectively tank the wall so as to have any splashback drain into the pond. Splashback on to the wall and then capillary action all through the stone would need to be quite something to make a noticeable impact on water loss versus plants, wildlife and evaporation, I guess. There will be some element of tanking anyway because, with it being a retaining wall, I'll have a membrane behind it to stop runoff from the ground above into the pool. That should help.

Thanks again for your help guys.
Ad

yea that membrane should be part of the liner for the pond or overlapped so it catches and drips back into the pond .
A

GBBUDD said:
yea that membrane should be part of the liner for the pond or overlapped so it catches and drips back into the pond .
Click to expand...

Thanks, but I was thinking to overlap the membrane behind the pond liner so that water which collected behind it (from the retained bank) would flow into a French drain rather than run off into the pond. I'd then thought to put a link/u-shape into the pond liner at the same point so that it caught run off from the brickwork. There'd be a small gap for water to run between the two so lost from the pond but better that than have water come through soil and into the pond?

As I say, I'm also thinking this is all over-engineered to ameliorate a relatively small issue of water splashing back against a wall and then being sucked through a 9" double skin wall. Especially with the rainfall we get here in England!
Ad

Absolutely you don't want water from runoff /the ground to get into the pond. But rain water from your roof gutters are probably fine. As i do have my gutters where no leaf ,matter gets into the gutter runs into the pond. I believe you have the idea water that makes it's way behind the water fall but is collected by ;liner is directed back to the pond. water from rains that hits the ground is directed away from the pond being careful not to have it get under the liner creating the HIPPO
You must log in or register to reply here.