Here you can see the "Fab Four", it's so nice to see them again I don't have all the winter set up removed yet, but getting there. This poor little frog.......I keep thinking it's dead, but I scoop it up, it moves slowly, so will leave it be.
Ad

Well look at the ducks that showed up in my pond today,lol! 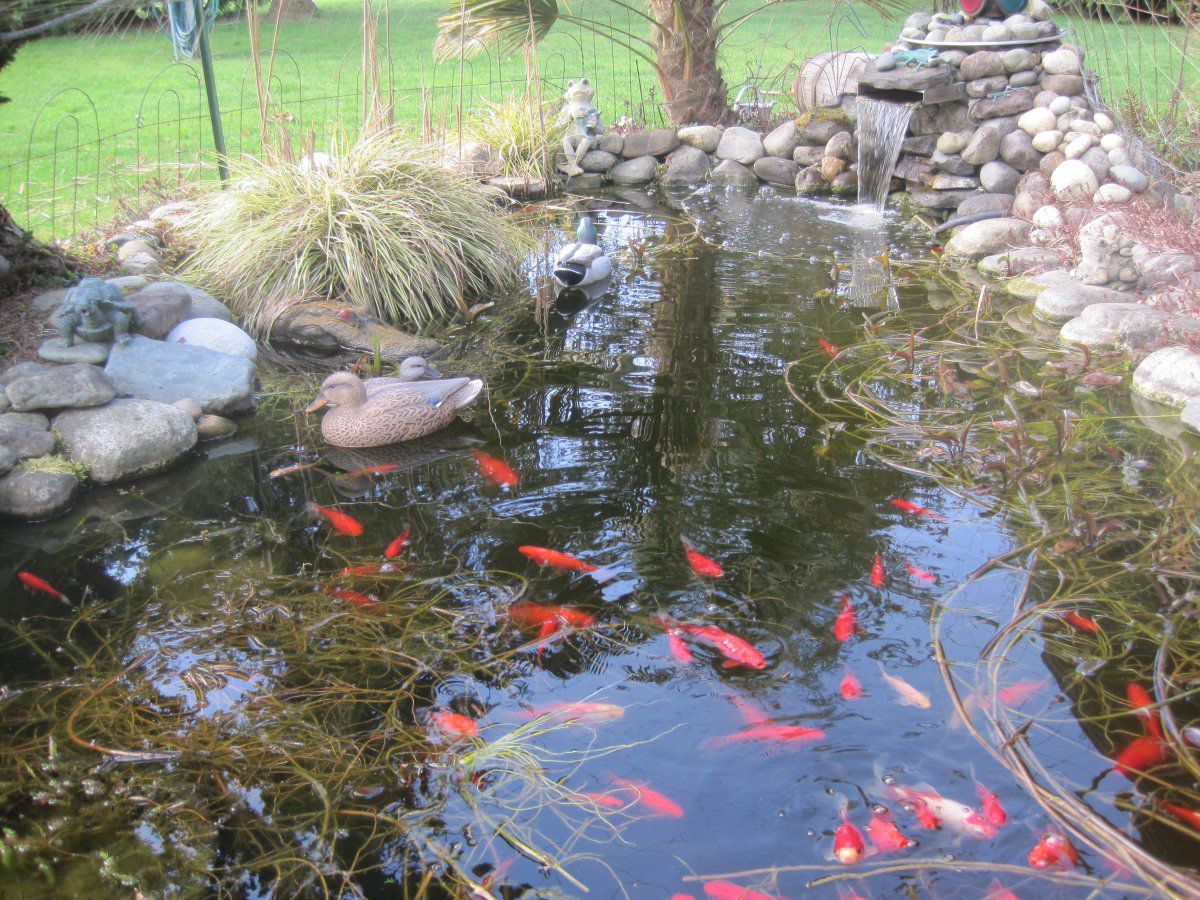 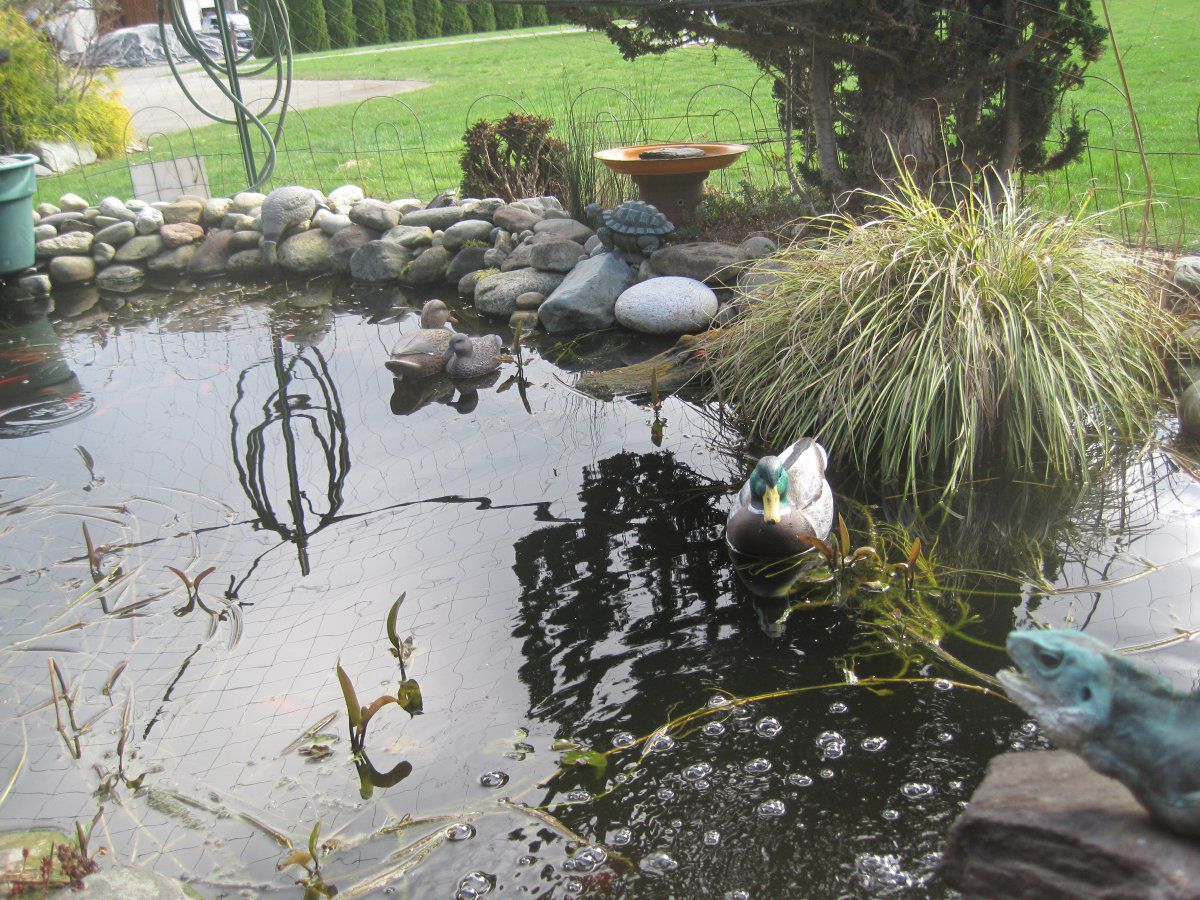 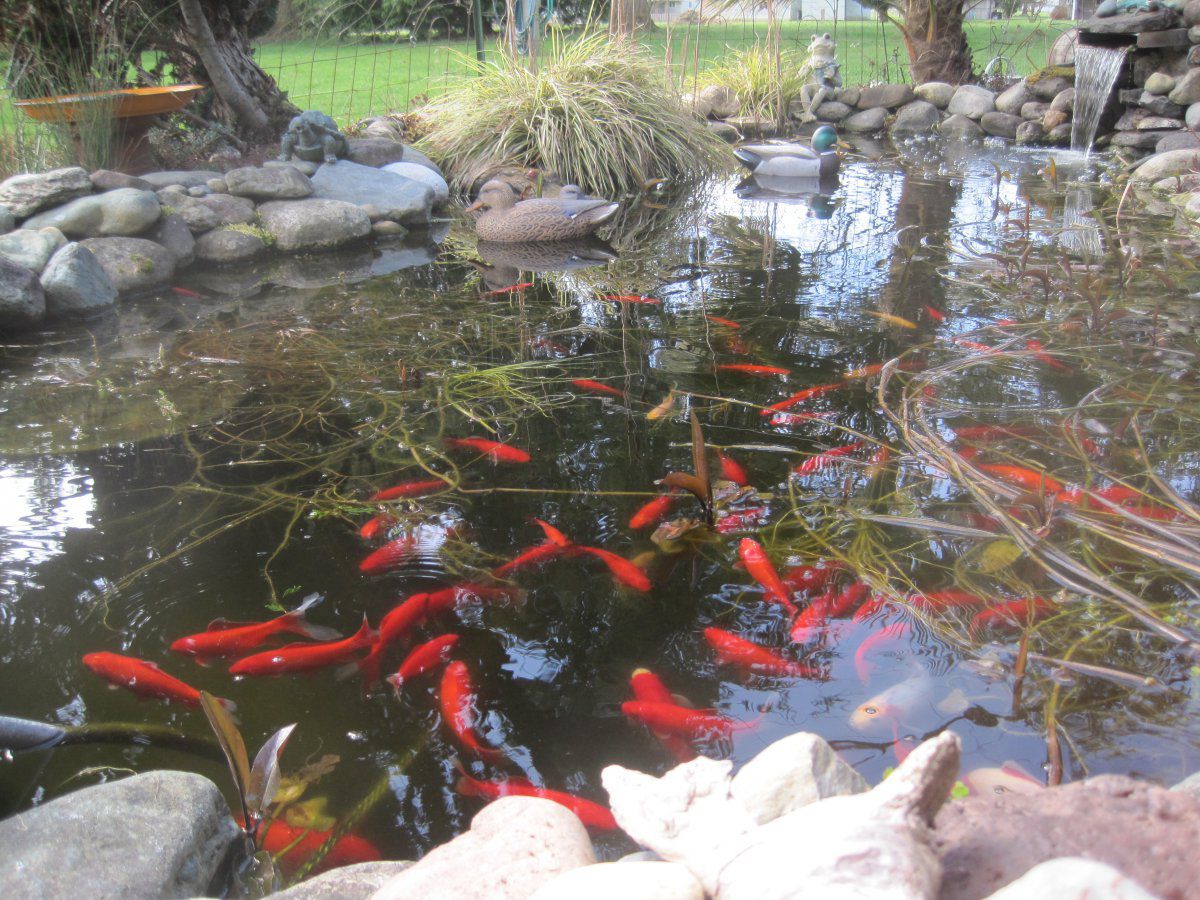 j.w said:
Well look at the ducks that showed up in my pond today,lol!

Today was a good day. Getting the pond settled in this spring has been difficult. I've been very busy and there's been a lot that's needed to be done. I had some time today, and the weather was nice, so I got to work. As you may or may not know, I had leaks in both of my hoses thanks to voles. The first hose was easy to access and replace, but the second goes under my waterfall and to my bog, and I feared I'd have to dismantle my entire waterfall.

As it turns out, I didn't have to. I was able to get the old hose out. Instead of routing the new hose back under the waterfall, which would've been difficult if not impossible, I decided to route it out of the pond where my waterfall hose already goes, around the back of the waterfall, and down into the bog stream. It worked out better than expected, and next time I need to replace the hoses, I can be happy in knowing that it'll be easy. I also now have the option just to take them apart and bring them indoors in the winter if I choose to. 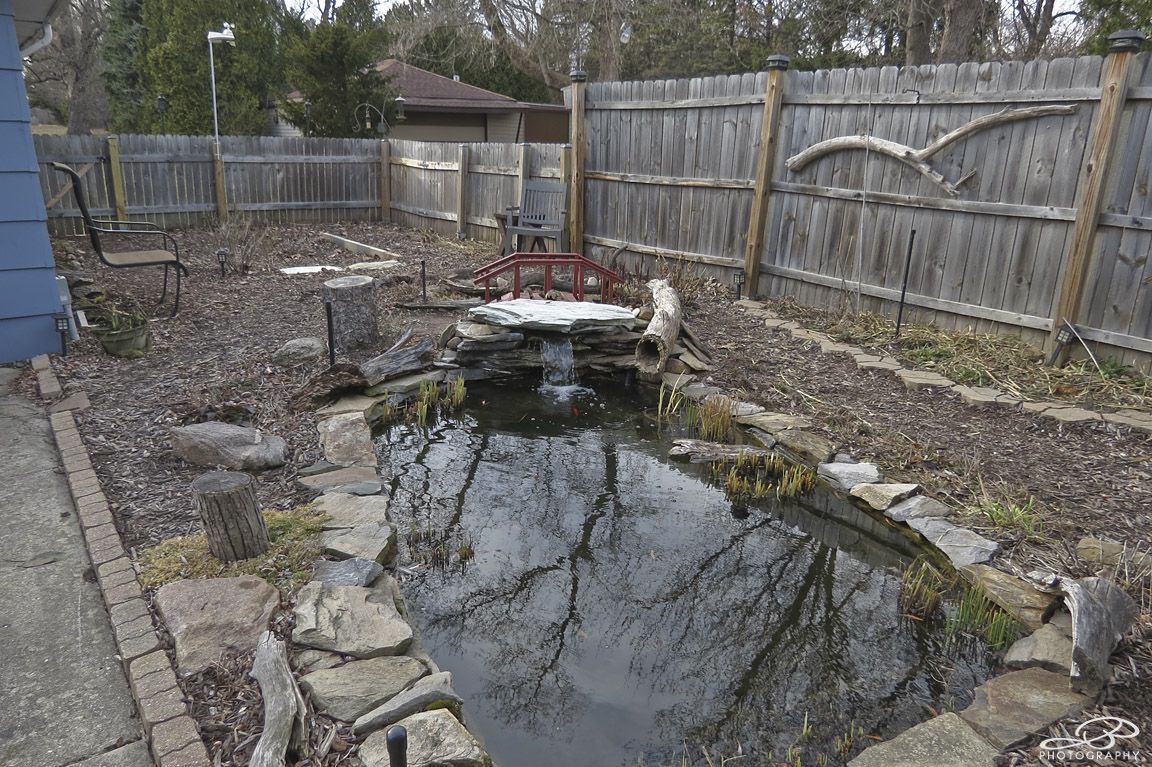 You can see the hoses stick out of the water just a little bit, and I think it actually looks better than how I originally had them. I can set a plant there to cover it up like I have before. My log waterfall to the right will be out of order this year. It's too rotted near the end to make it work, so it'll be just be there for decoration this year, as well as helping to hide my hoses. 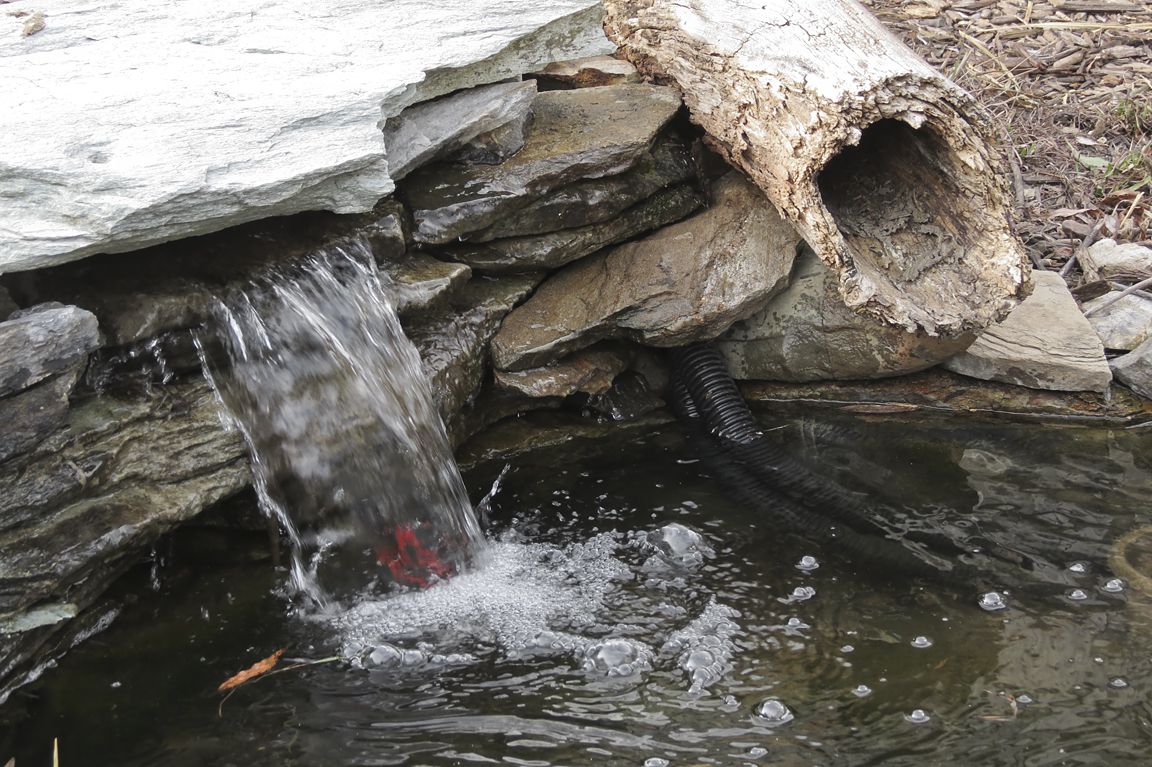 While I didn't have to take apart the main part of my waterfall, I did have to move quite a few small rocks around, and now they're all back in place. and I have a little extra room to plant a couple plants by my log. 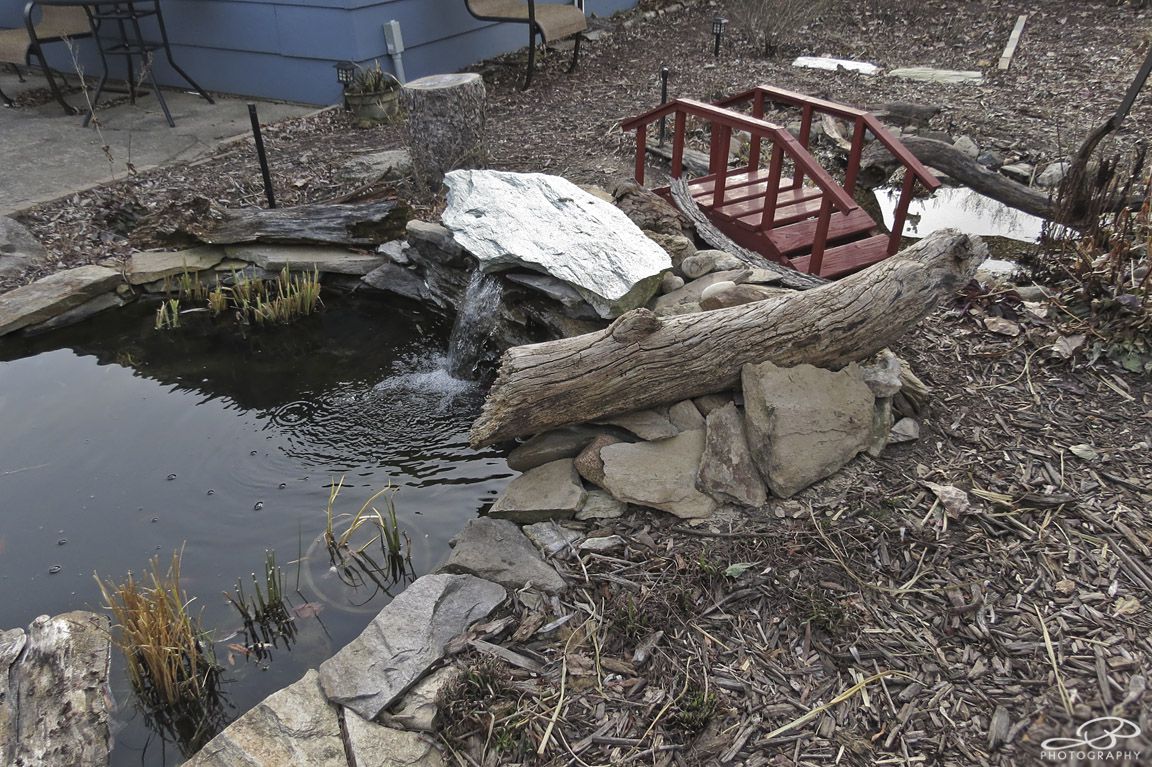 I also moved around some pots today, and I still have some decisions to make as far as that goes. I had originally planned to test my water today, as its long overdue, until I realized the test kit was expired and I didn't have time to go get another one. I'm hoping to take care of that on Saturday. Those of you who were in my Fish Bumps topic know I had a fish with dropsy and I was also missing a fish that I assume had died. I found the missing fish, and it was indeed dead. I found it when scooping some of the muck on the bottom of the pond. I'm sad about that because it was by far the largest fish in my pond and one of my favorites. The fish with dropsy has now gone missing and I can't find it. I am sure it tucked itself somewhere and died, but I cannot find it anywhere and it's driving me crazy. I'm thinking it may be in the mess of waterlily roots. I'm hoping I can find it. A third fish, which some of you recall appeared to have carp pox, does not appear to have gotten any worse, which is good news. I am hoping things are starting to take a turn for the better.

Lastly, my bog plants are beginning to grow. Marsh Marigold and Blue Flag Iris are just beginning to show signs of growth. I had quite a few birds fly in and drink from the bog while I was outside working. A goldfinch flew right up next to me and didn't seem to mind that I was there. 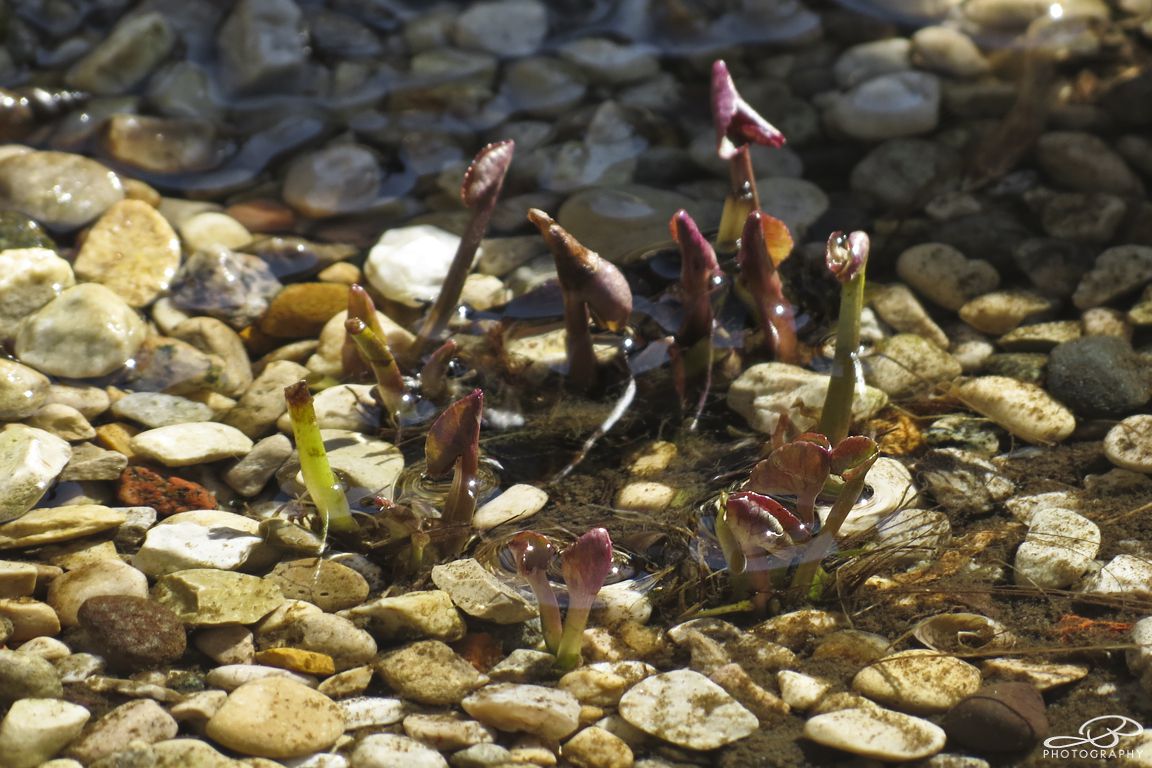 As I sit here sneezing from our pollen!
Ad

j.w said:
As I sit here sneezing from our pollen!
Click to expand...

Eat local honey! I got rid of my allergies by doing that.

I just had the sneezes and runny nose, now nothing. Spring is no different than any other time of year.

The pollen is so bad here that everything is green .

@JBtheExplorer , I'm glad things are falling into place and you were able to make the repairs without having to dismantle the entire waterfall.

I'm sorry for the loss of your favorite fish It's so encouraging to see new growth pushing out of the bog....Spring is here !
Ad

My bog is greening up growing quickly. 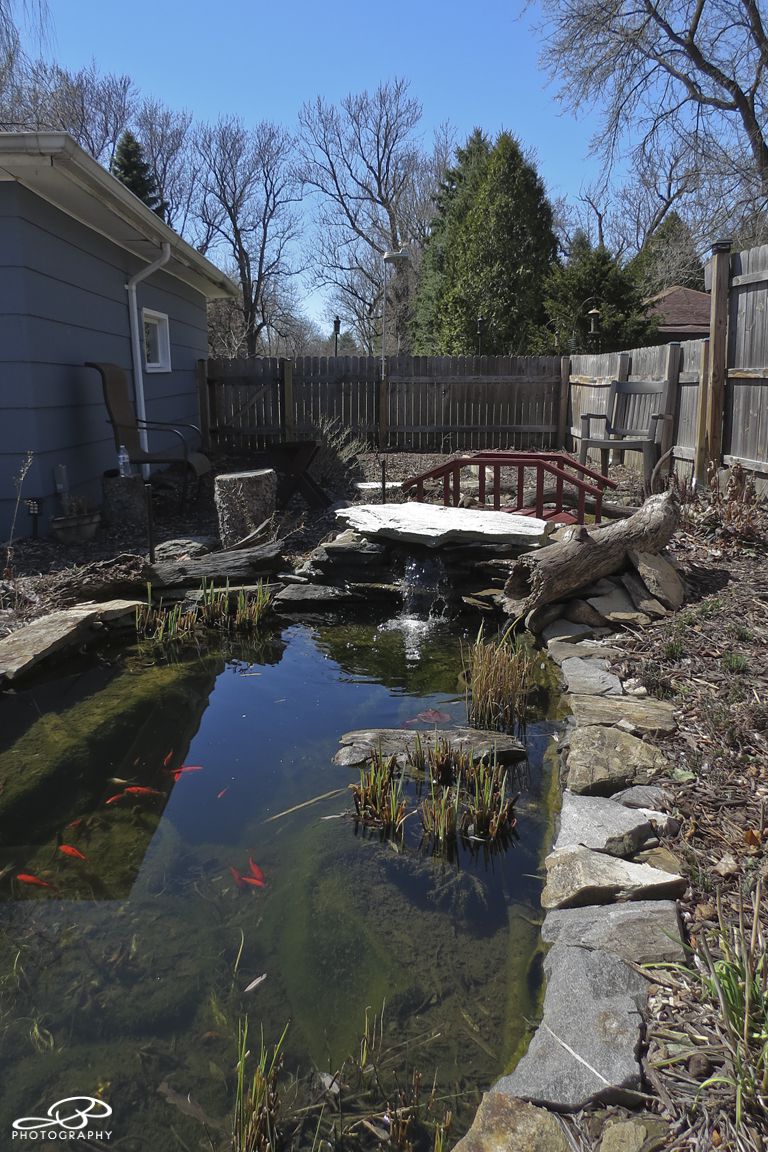 I have a lily flower bulb .IU just saw it this morning .I have been busy all night trying to catch a wild cat .I am guessing it is a male and he attacked orange peel my male cat and tore out some hair on him .I am guessing some one dumped it off .2 males unrelated will fight over territory .Momma is the mother of orange peel ,no name and tigger and princess and will defend his territory and his momma and brothers and sisters .I had momma and princess fixed .Momma was a cat my neighbors got and they neglected her and she had the 4 kittens because of it 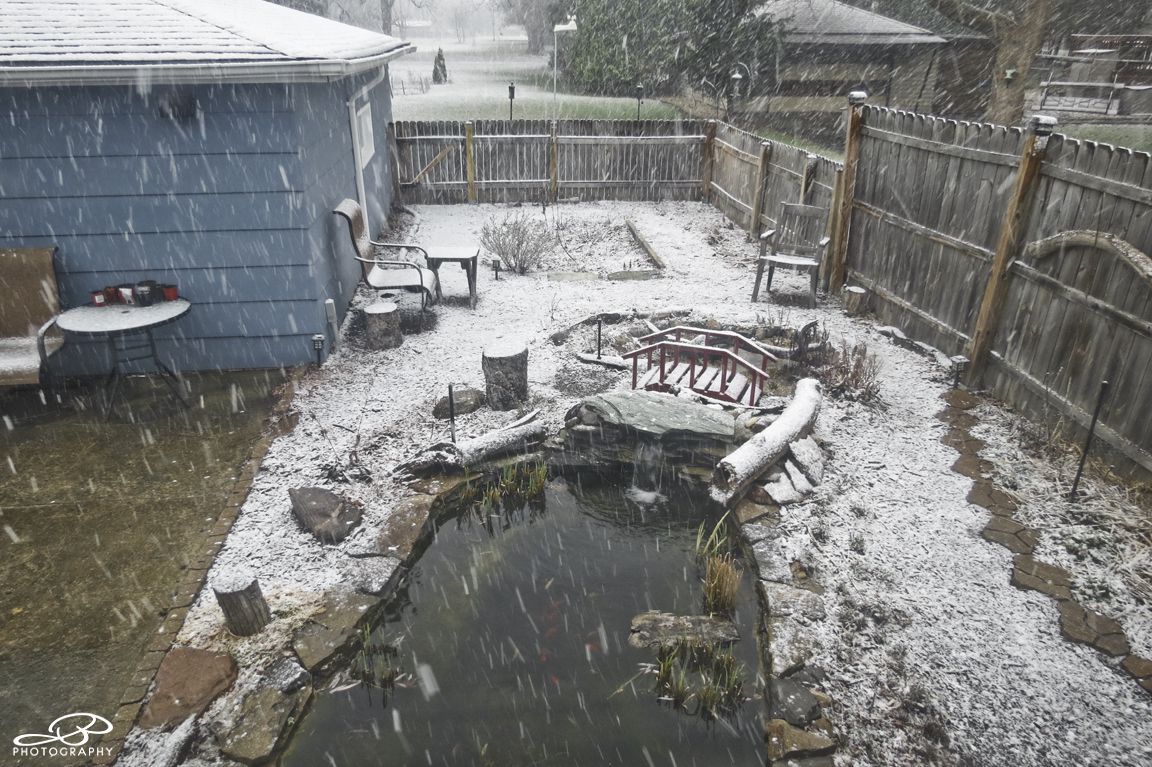 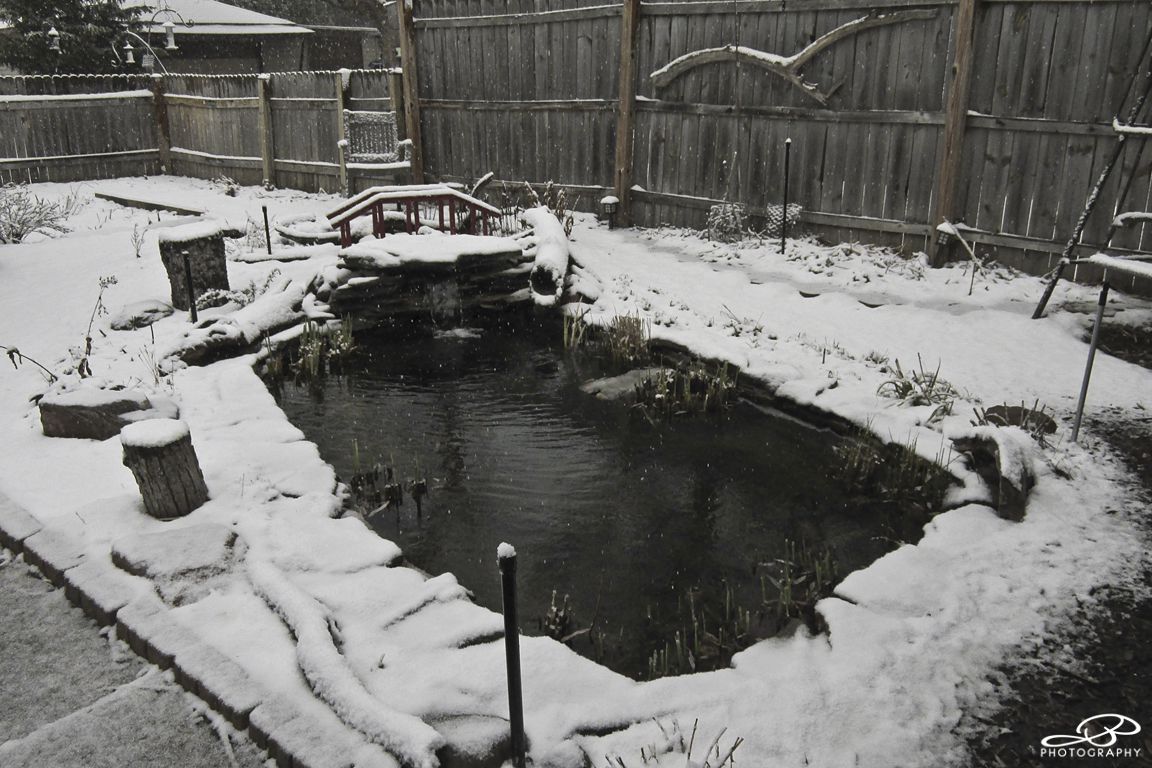 I hear ya. The weather here has been wet and cold. Fish and frogs are still not liking the temps. Very unstable still.

I have to get some pictures of my pond, been busy with my sweet mother who is making a startling and astonishing recovery from last stage 7 dementia. People all over are shocked from the hospital to the old folks home.... will have to write about it on my thread....

Weather is not too bad and I did plant early spring flowers around pond and I have next week off so will try to be more active on this forum.... Flat Earth research took lots of my time lately but now that I learned everything about FLAT Earth and the obsession over FLAT earth is not so bad, ha ha ha. At first is was a great shook to my system as I used to believe in the globe but now I am more educated and happy to know the earth is actually an "infinite Plane" with 33 other lost continents beyond the ice wall....

Picture from this morning.
The ground is still frozen here but I think the pond can still thaw and dry out before the June rains come.
I think I'll only need a few days to get the bentonite mixed in and a topsoil/gravel cap installed.
Getting the plants I want in time could be iffy.
We'll see.
I should probably start a separate thread soon. 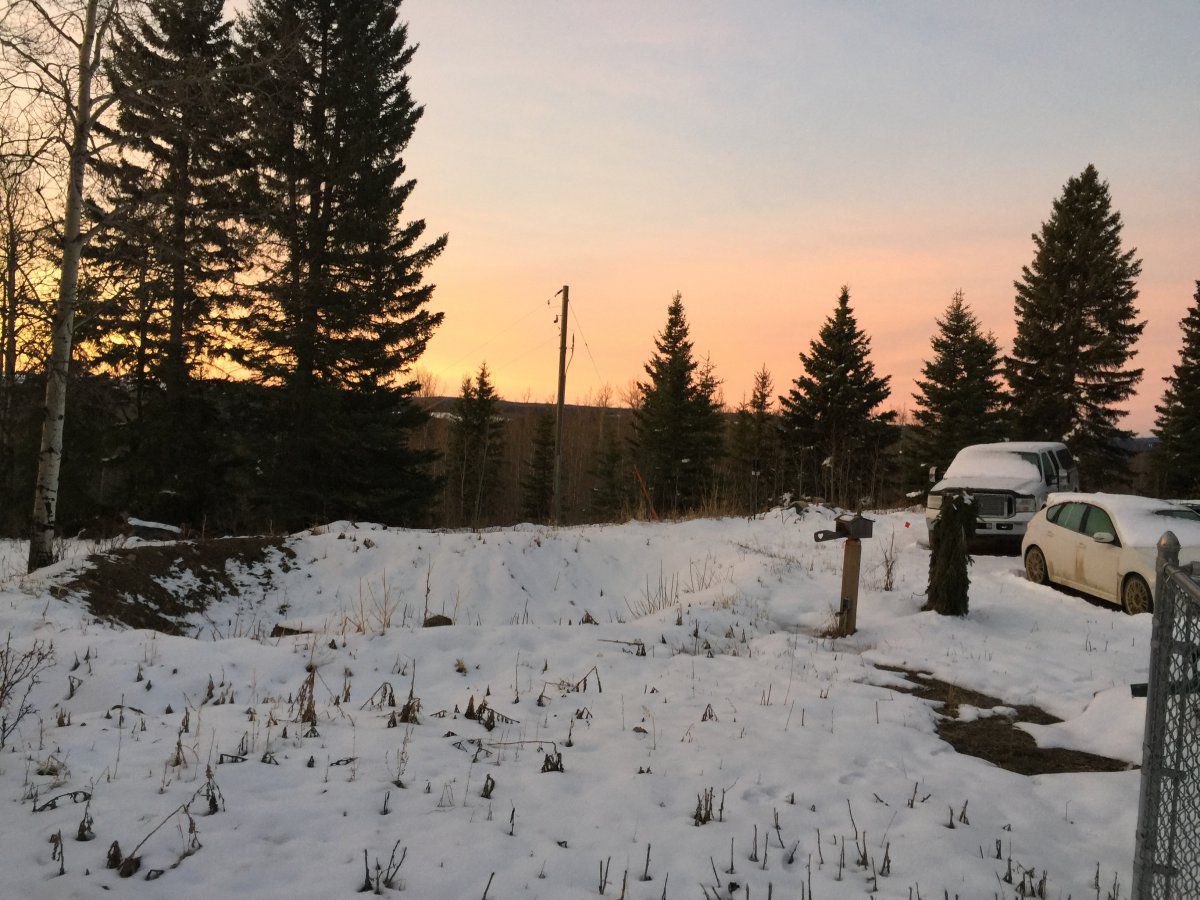 MitchM said:
Picture from this morning.
The ground is still frozen here but I think the pond can still thaw and dry out before the June rains come.
I think I'll only need a few days to get the bentonite mixed in and a topsoil/gravel cap installed.
Getting the plants I want in time could be iffy.
We'll see.
I should probably start a separate thread soon.

Looks quite and pretty with the colorful sky. Can't see where the pond is. Hopefully things will melt for you soon. I have pretty hardy flowering spring plants around my upper pond now.
You must log in or register to reply here.